The last ten days at RSPB Rainham Marshes have seen me make a couple of escapes for freedom but to be honest they have not exactly resulted in the natural history wonders that I was hoping for and so I have had, for the most part to be content with what I can see from the window.


This did not include the Cattle Egret and Spoonbill present on the 14th July  and I was forced to make do with a selection of inverts from inside the glass panes that make up my normal silent movie television screen viewing conditions.


Seven female presumed Hybomitra ciureai were rescued from the glass prison along with a couple of the green eyed Chrysops relictus.  The latter is very keen on dining on human blood but thankfully the Hybomitra are not so fervent!

Small and Essex Skipper abound at the moment around the blooming Lavender and I have found a couple of Anthophora bimaculata amongst the other bees and the season first Osmia spinulosa doing their super vibrating dance on the Ragwort and Fleabane.


Peacocks have hatched in numbers and gaudy eyed beasts are flouncing all around the trails.

I eventually got a good walk on Friday 19th when the pesky invisible Spoonbill was almost enough to tempt me out but the two Great White Egrets in front of the Butts Hide made a walk even more tempting.  I even saw these two from the window but wanted more and a Red Kite circling over the Dartford Warbler field sealed the deal.

I went via the woodland and found three Volucella zonaria on territory and both Volucella pellucens and Eristalis intricaria were also patrolling at head height.   The reedbed as I came out of the woodland was full of hoverflies with countless Episyrphus balteatus, Syrphus and Eupeodes resting up.

Brown Hawkers are now on the wing but in general dragonfly numbers still feel very low but I still have hopes of Blue-eyed Hawker once again.


As I came out of the woodland the Red Kite came up from the ground not far from me and gave the most amazing of views and from this range could be seen to be an immaculately plumaged juvenile.  It was crisp and bright and spent the next twenty minutes circling around with occasionally attention from Carrion Crows and a strangely agitated Grey Heron. 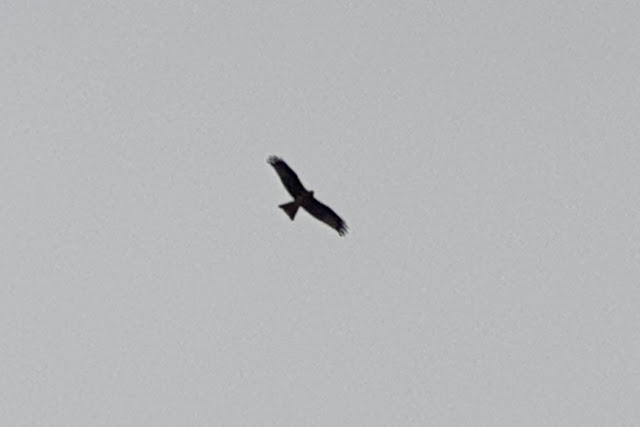 Once at Aveley Pool the Spoonbill decided to remove its cloak of invisibility and was loafing on its ankles on the island. Not the most engaging of views but at least it put its head up once!


Two male Ruff fed with about 30 Black-tailed Godwits and the two young fledged Avocets were still with their parents.  A scan of the large gulls produced two pristine juvenile Yellow-legged Gulls but there were no Meds with the Black-heads.

Swifts and Sand Martins were drifting in from the west no doubt ahead of the next wave of rain that I hoped to avoid. Down to the Butts Hide where I had the two Great White Egrets all to myself as they stalked around just outside. They are always such imposing birds with a certain regal stance and demeanour and I never tire of seeing them but especially here. I twitched my first on the 17th July 2006 while in the middle of working on my aviary in my garden in Strood.  It was found by Steve Hall who was out field teaching at the time. We were not even open to the public for another five months and this was still a huge Essex bird at the time. I reckon that these were my 44th and 45th for the site since that time, reflecting the amazing change in fortunes of this species. 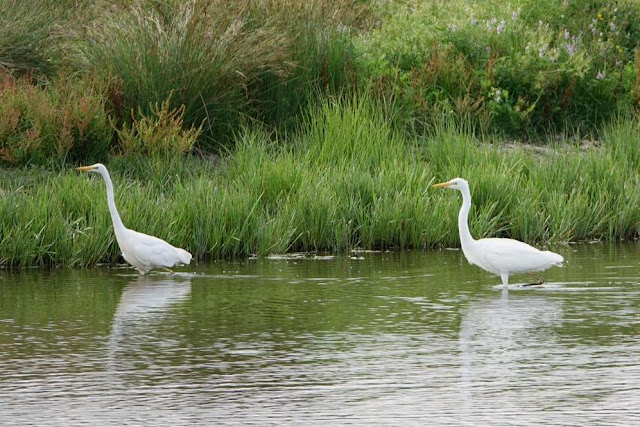 They had a couple of good fly abouts showing off those ridiculously long black legs and languid light before eventually heading off to the north late morning.


There were 21 Little Egrets dotted about out front and a couple of well grown Gadwall and Shoveler broods along with two of our fledged Little Ringed Plover from our two broods this year.


The male Marsh Harrier was out hunting over Aveley and two of his kids were playing over the now bone dry Target Pools.  It feels like three young have been fledged this season but whether this is two from one nest and one from the other we are trying to discern.

There was plenty of flora alongside the paths with the Wild Carrot being very popular with vast numbers of Red Soldier Beetles living up to their alternative name of Bonking Beetle.  I checked the Great Mullein for Crab Spiders with no joy and tried once again to capture the ephemeral colour of the tiny Vervain. It is the palest shade of lilac but never looks quite right on a picture. Cinnabar moths were munching their way through the Ragwort and the sky blue Chicory was offset but the swathes of yellow Ox Tongue flowers.

Until last year I was only aware of Bristly Ox Tongue until I had Hawkweed OT pointed out to me and we have plenty of both species growing side by side on the marsh.  Following an online chat with Lee Gregory about some confusing plants in Gwent, he suggested that the very prickly ones with Hawkweed like leaves may well be hybrids.  I was intrigued enough to pay attention to ours and suspect that this may be the case here too.

However, I am no botanist and will dangle this problematical carrot in front of Enid when I see her next rather than upsetting the botanising community further...

A brood of ten Shelducklings were with their parents in Aveley Bay and a solitary Curlew was out on the mud where three fresh chequerboard juvenile Great Black-backed Gulls were loafing in a siblings only unit suggesting local breeding once again within our stretch of the Inner Thames.

I ambled back along the Victorian Seawall where Field Bindweed crept its pink and white trumpets across the concrete and the Sea Beet is now setting seed leaving little bundles of future plants for the next big tide to pick up and disperse up and down the river.


The cloud was rolling in and the sky darkening and with a rising wind it would not be long till rain arrived but even the wet afternoon was not birdless with more Harrier views and a fine adult Med Gull that glided past the window with the wind behind it.

My Saturday was not quite as I had hoped with cat related knee dislocation traumas, washing machine installation incompetence (on three occasions) and subsequent general irritability but was salvaged somewhat by helping out with the Thames Chase Bioblitz at Broadfields on Sunday 21st.


The lack of interest from the visiting public in looking at or for anything was disappointing and although we tried to engage with people out on the trails, it was all about a bike or a dog and the strange compulsion to jog.


However, I had fun (yes, I enjoyed myself) and set to task recording every single thing I could identify comfortably.  Phil and Mel were working their way through the more complicated flies and Yvonne was out grubbing for Ladybirds and Shieldbugs leaving me with a total of at least 175 species during my search which I am sure will increase further over the next few days as others send in their sightings.

The week ahead is looking incredibly hot and I suspect that insects will again come to the fore at work again so let’s hope for more opportunities to nip out for a speculative look...
Posted by Howard Vaughan at 19:26 2 comments:

It was a pity to be leaving Bens so soon but we were soon packed and tidied and heading back towards Seville but still with birding in mind before our late afternoon flight home.

The usual assortment of roadside birds were seen as we headed back East into Spain with Iberian Magpies, both Shrikes, Black Kites and White Storks along every road. 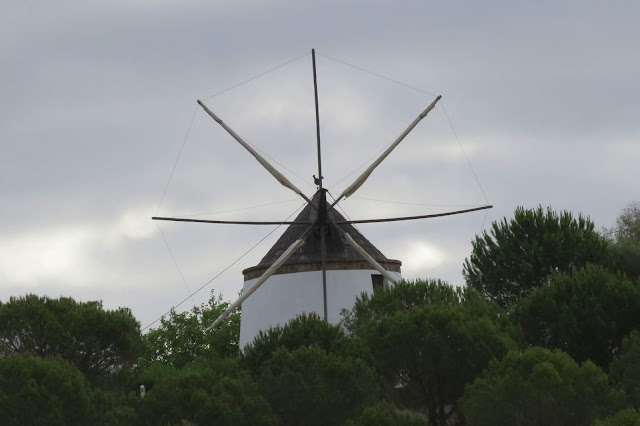 We were aiming for the town of Bolullos Par del Condado and a small church of Ermita De Nuestra Señora de Las Mercedes on the outskirts that was reputed to be in the heart of Bushchat country.  It was seriously hot but our searching was not in vain and three birds were seen including two singing males but they seldom stayed in the open for long and we were all glad of our prolonged views on day one.


A male Montagu’s Harrier actively hunted the adjacent sunflower fields with Swallows in attendance and up above Short-toed and Booted Eagles, Buzzard, Raven and Black Kite were all seen. 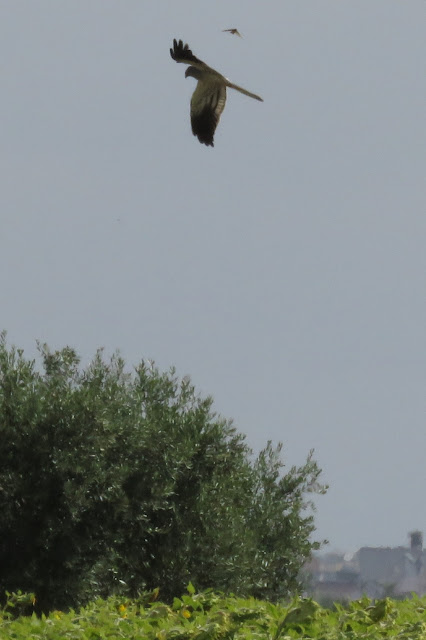 Our time was at a premium so we pushed on to the nearest part of the Donana and in fact no sooner had we entered it then we left it again and found ourselves in the Reserva Natural Concertada Dehesa de Abajo with a patchwork of paddy fields similar too but nowhere near as birdy as Brazo del Este. The fact that we were in prime Iberian Lynx country was pointed out by the coolest Banksyesque road signs! 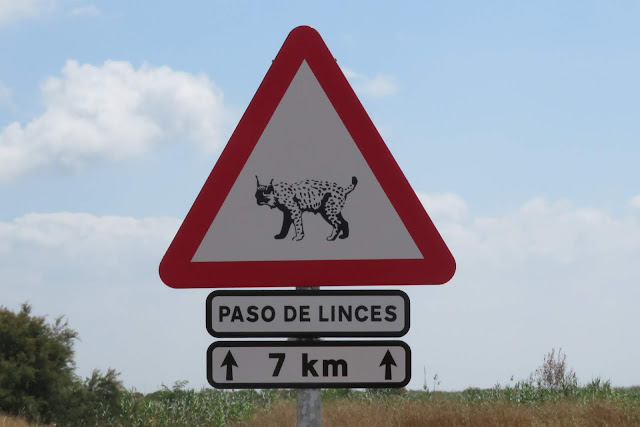 There was the usual scatting of Grey and Purple Herons, Great White, Cattle and Little Egrets and Glossy Ibis. Great Reed and Fan-tailed Warblers sang in the reeds with Iberian Wagtails for company and White Storks and Black Kites were constant companions. 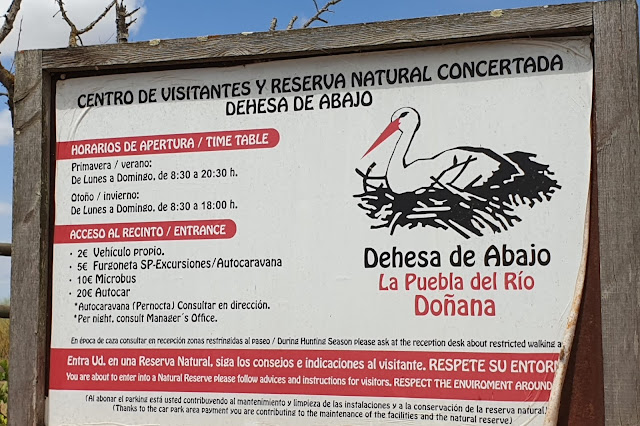 The lagoon at the reserve was superb and deserved hours rather than the 30 minutes we had but in that time we even added a few species to the trip list with 30 Great Crested Grebes, a brood of seven Red-crested Pochards and two drake Shoveler. Little Grebes, Pochard, Mallard and plenty of Coot were present but we could not find a Red-knobbed amongst the closest birds and the rest were too far and too hazy.

There were literally hundreds of Spoonbills sieving the waters with a splodge of pink Flamingos and a line of perhaps a hundred or so rusty Black-tailed Godwits.
Squaccos and Night Herons were in and out of the vegetated islands and Western Olivaceous and Reed Warblers sang while around the visitors centre Jackdaw became our last trip tick with dozens in close proximity to the White Storks that were nesting at eye level on posts and pine trees. 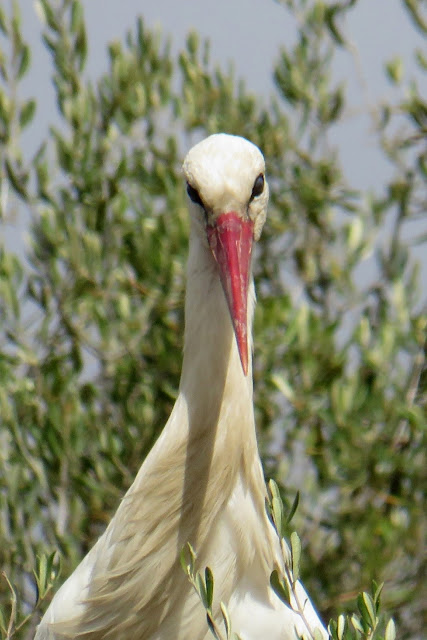 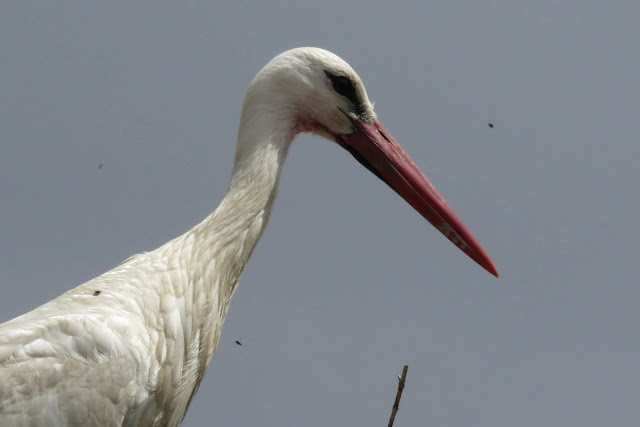 Bee-eaters prukked from the wires and I can’t think of a better bird to round up any trip...
Seville airport was painless and we almost left on time for a swift journey back to Blighty after four successful days, jammed with memories. 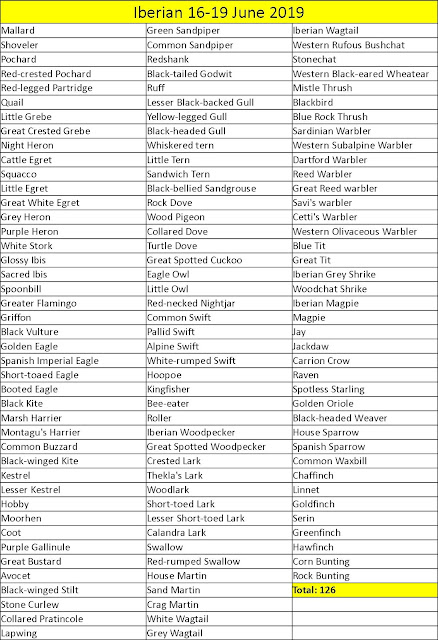 Posted by Howard Vaughan at 19:49 No comments: