The Dungeness Peninsular in November can be a bitterly cold place to go birding but as we drove down in the driving drizzle this morning the temperature was reading 16c at 0900 and although the wind was howling from the south-west and waves of wet were pulsing through, it was anything but  wintery.

As we arrived at the ARC it let up enough for our party to head for the Hanson Hide before it closed in for the next hour. ‘Dear BBC Weather....  your live radar weather feed clearly showed that we were under some cloud but out of the rain which was now in France. Unless we too were also now in France this was clearly not the case....’

Anyway, it was an entertaining respite with a fine Great White Egret dropping in and a Bittern performed very nicely along the reed edge (actually our second bird as I saw one from the car just before we arrived) before performing a windblown circuit. Three female Goldeneye were with the dabblers that included three cracking male Pintail and silvery white Great Crested Grebes loafed about. Several Marsh Harriers made regular circuits and included an almost completely dark juvenile bird.


The willows just outside were in the lee of the wind and were full of active Chiffchaffs, Goldcrests and Blue Tits while Cetti’s Warblers chattered away.

With the curtain of rain seemingly past we headed for the beach only to meet the next wave which thankfully soon moved through. We diligently checked all the gulls resting on the shingle but there was not a trace of a single Caspian Gull although the Great Black-backs were truly imposing. With a bit of shelter from the wind we were able to hear finches and up above hundreds of birds were on the move. They mostly seemed to be Goldfinches and Linnets but there were definitely a fair few Siskin amongst them and I heard Chaffinches and Greenfinches and at least one Brambling. They seemed to be re-orientating over the point and circling round before heading south-west. I am not sure if they were attempting to move across the Channel or simply coasting. 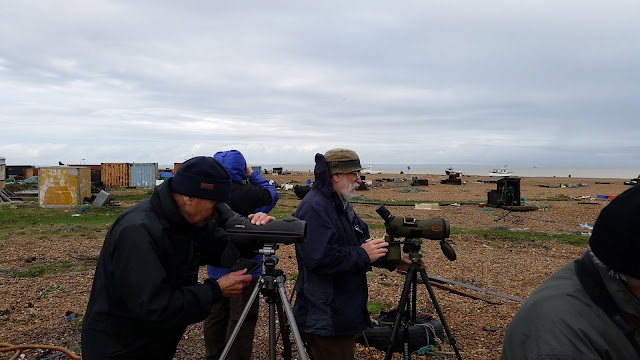 Out to see there were a few Gannets and Kittiwakes heading west along with a couple of Guillemots and a Razorbill and one distant Fulmar. Great Crested Grebes and Cormorants were scattered across the vista and a fine pale phase adult Pomarine Skua powered its way past. Two small flocks of grunting Brent Geese did likewise. 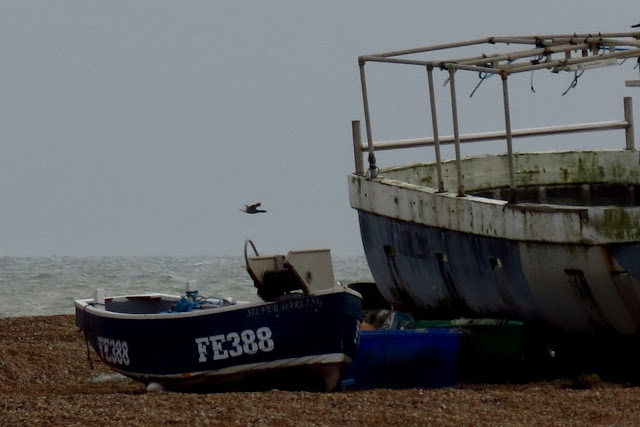 With no new gulls and lunch beckoning we made our way back to the RSPB reserve passing a solitary Tree Sparrow on the feeders on the way in. Lunch outside on the benches was pleasant and positively balmy and set us up for our circuit of the trail.


Burrows Pit yielded two red-head Goosander but there was no sign of the two Smew and a flock of very smart male Pintail upended in the shallows. The trees were chock full of Cormorants in all plumage states. A much underrated bird. 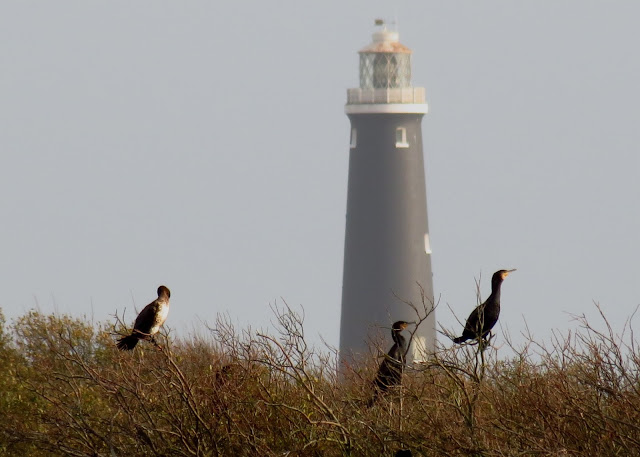 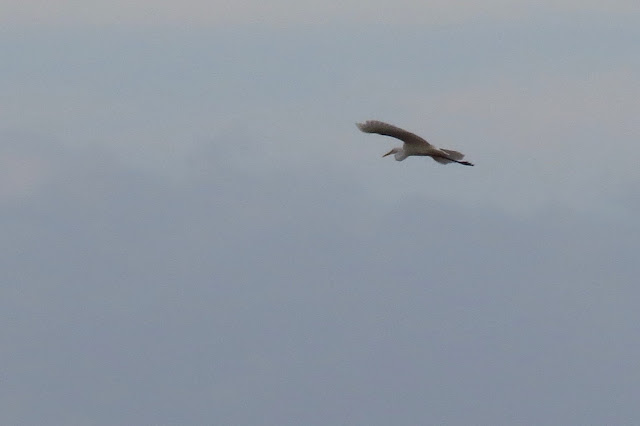 Goldcrests called from the Sallows and a Raven found its way onto the list in the usual Denge Marsh area along with our second and third Great White Egrets and at least six different Marsh Harriers.  We were at the big bend before the Hookers Pit view point when I heard some Long-tailed Tits and a Firecrest call. I stopped the group and immediately heard a squelchy tecking from the brambles in front. My very first thought was Lesser Whitethroat but then up pops a calling Dusky Warbler right in my view. I called it immediately and it flew to the sallows behind. Over the next hour it called on an off and we had glimpses of it several times but needless to say it was staying low in the strong winds.

As the light fell we decided to leave it be and continue on the trail feeling the warm glow of a very good self found bird.  There was nothing with the large Greylag flock from the viewpoint and a very impressive Leopard Slug was the highlight!

With a little light left we drove back to the ARC (passing another Great White on the way) and spent a wondrous last hour (till after the non-existent sundown) watching at least five Great White and eight Little Egrets fly into roost along with another Bittern flyby, weed-dancing Grebes, Kingfisher, Water Rail and an acrobatic female Merlin to round off an unexpectedly excellent day out.
Posted by Howard Vaughan at 21:42 1 comment:


Just a bit of murk this morning with no grotty claggy fog but thankfully also no wind either. I headed out shortly after we opened up and wended my way towards the woodland. Redwings and Song Thrushes were pinging out of the bushes and the playground held a nice mixed flock of Green, Gold and Chaffinches.

I successfully pished out a Goldcrest and some Long-tailed Tits by the bridge and a Chiffchaff called a little further back but was drowned out by the Cetti’s Warblers which were giving it large.  A Great Spot Woodpecker dropped into the chestnuts and had a quick thump at a dead branch or two before bounding off.

Amazingly, just for once, I actually remembered to look for the Barn Owl and one of them was sitting almost right outside their box albeit still miles away. A Common Darter flicked by and Wasps were out on patrol and seemingly after sluggish flies.

No one saw a Dartford Warbler yesterday so I was very pleased to pick up what seemed to be the darker male bird in the little elders with its Stonechat chaperones. He performed very well for a few minutes before going to ground again. This is definitely not the bird that we saw last week and fits in with the original report of a male bird and not a drab first-winter bird. Indeed later on both birds were seen in the same spot so keep your eyes peeled.


There were plenty of Skylarks and finches bimbling around and they were to become a feature of the morning.  A little further on the last of Clive Watts’s summer charges was still in her dew soaked web although by midday she had apparently gone. As none of us have ever seen a wasp Spider past the last week in September this late run of specimens here has been remarkable.

The smell of the huge Polar just past Ken B is probably the most autumnal of any tree on site – rich and earthy with just a hint of decay and damp. I am never sure if I actually like the smell or not (a bit like Horse Chestnut flowers) but it is so much a sign of the turning of the seasons with green leaves turning golden yellow before the blackness of their species quickly overtakes them. 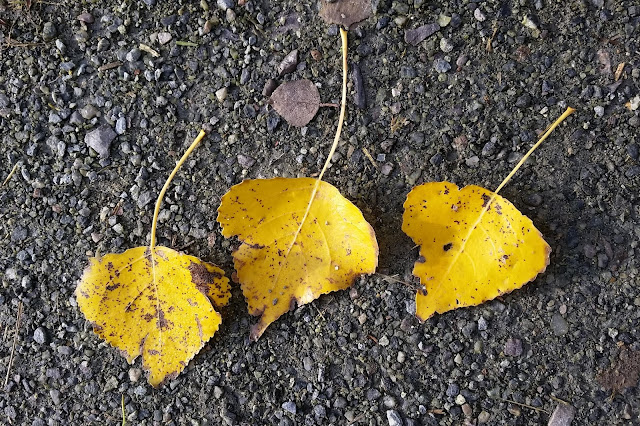 Out on Aveley Pools there were 21 scattered Pintail in elegant upending pairs while Shoveler squibbled in groups and a Little Egret and several Grey Herons speared fish in the shallow water. There are only a smattering of diving duck so far as the water levels remain so low. Both the adult male and female Marsh Harriers quartered the marsh with the male looking particularly resplendent while in the corner of the Tringa Pool a smart Water Pipit alerted me to its presence with its less strident ‘phist’ call.

I was then delighted to discover that the annual reprofiling of the Butts Scrape had attracted at least five of these smart, pale, eyestriped pipits to scurry along the muddy margins with several Pied Wagtails, 20 Meadow Pipits and a big flock of Linnets. I am hopeful that this becomes a feature of the winter rather than us trying to find odd birds on the foreshore. It is not that they are difficult to identify, it is just that trying to find them lurking amongst the seaweed is! Other sites such as Staines Moor, Stodmarsh, Minsmere and the Yare Valley Marshes hold good wintering numbers in similar habitat so perhaps this is the time of change for our precious piece of marsh? 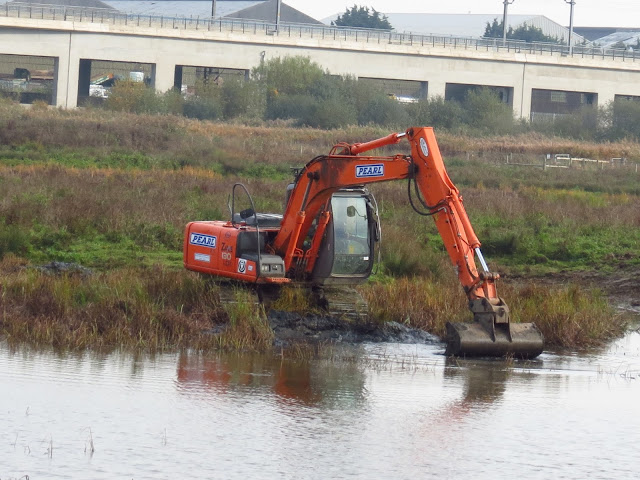 Snipe zig-zagged overhead and a Kingfisher almost flew into the hide as it zipped towards the MDZ. The male Marsh Harrier gave another fly by and my first Short-eared Owl of the day dropped back onto the foreshore in the distance after going for one of their early morning wanderings. Later on up to five would be seen incredibly well down at the west end of the river wall where they have a liking for the longs on the saltmarsh before heading up onto the capped landfill and into the Enclosed Bay to hunt. The quality of the images coming out of there has been superb.

Basil Thornton and his wife were watching the Bearded Tits at the Dragonfly Pool at incredibly close range but I could not focus on them quick enough and thankfully Basil let me use his wondrous shots.

Just a short way past this the energetic vols were busy with the lengthy task of fitting the new plastic planking onto the section of boardwalk that has had to be replaced. They are doing a great job – only about 3.5km to go... 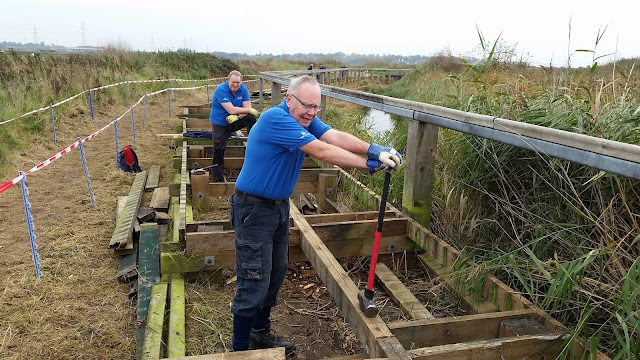 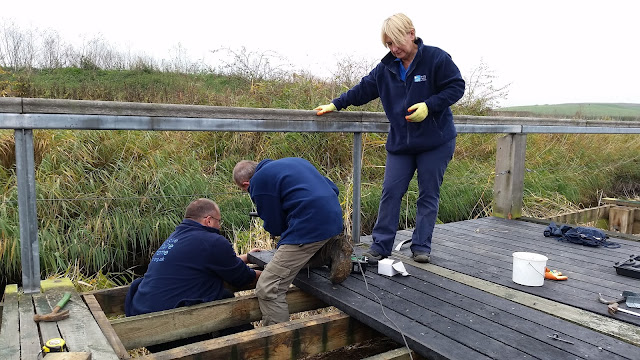 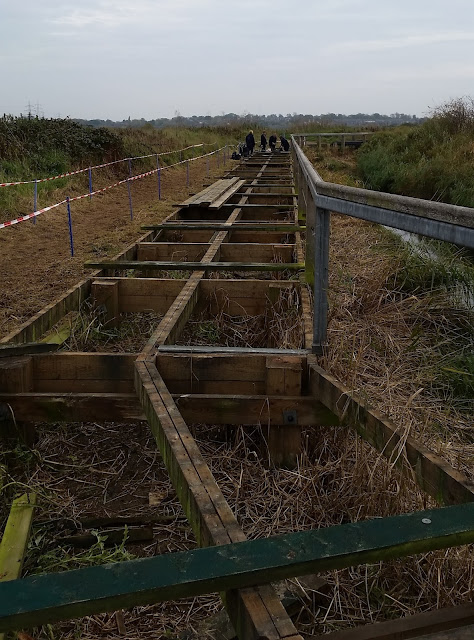 Up on the river wall where the low tide revealed a great selection of waders across both sides of the Thames with 4 Knot, Bar-tailed Godwit, 18 Black-tailed Godwit, Greenshank, Spotted Redshank, 180 Dunlin, 97 Redshank, 391 Lapwing, 8 Golden Plover and 4 Curlew. Knot are especially scarce here and Fraser did well to find them first thing this morning. Teal and gulls lined the edges and I counted nine Yellow-legs amongst them. The first three Shelduck were also back on the mud after their summer sojourn to Germany but more of that later.  Two tame Kestrels allowed a close approach on my amble back along the Victorian seawall and six Rock Pipits and yet more Skylarks were seen but a sausage bap brunch beckoned and only some super spotty Starlings and Teasel munching Goldfinches distracted me for the last hundred yards. 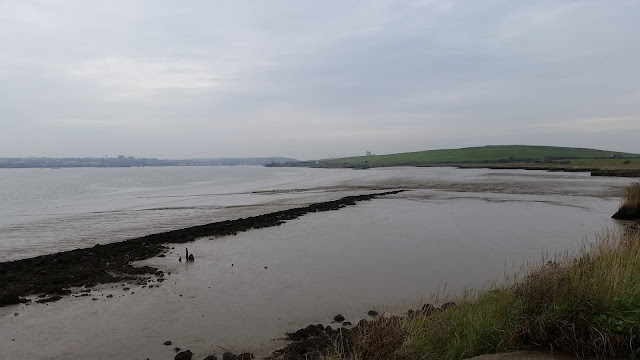 The rest of the day was an inside affair but I cannot really complain with frequent views of various Marsh Harriers and the two monster Ravens once again upsetting the local corvids and causing me mid-meeting to exclaim ‘oh...look  a Raven – kronk kronk’. A Short-eared Owl even glided past the window and along the southern trail much to everyone’s delight while plump Greenfinches investigated the fat hips outside the window.


The final noteworthy sight for the day was a skein of high flying small ‘geese’ that Andy Tweed somehow picked up. They were mere dots and it took some time to get them in the scope but they were not Pinkies as we first suspected but 23 migrating Shelduck dropping in from a grey sky freshly arrived after their long flight from the Waddenzee where the adults head en masse in the summer to moult on this huge shallow body of water with tidal flats and wetlands.

So, although they ‘only’ turned out to be Shelduck and not some unusual incoming grey geese, their arrival is probably more significant for announcing the return of a species that is characteristic of our mighty southeast muddy estuaries and to show that you should always expect the unexpected but that it is not always something as out of the ordinary as you might as hoped!
Posted by Howard Vaughan at 21:56 No comments: