Wild, wet and windy would be an apt way to describe the day. The weather blew through in curtains of driving rain all day and made birding and even standing up challenging at times but the crew persevered and we ended up having a reasonable day. Hoswick was given a good look after breakfast and despite the wind we found nine YBWs, Spot Fly, two Redstarts, the odd phyllosc and Peter had the Reed Bunting again and found a Red-breasted Flycatcher that eluded the rest of us. 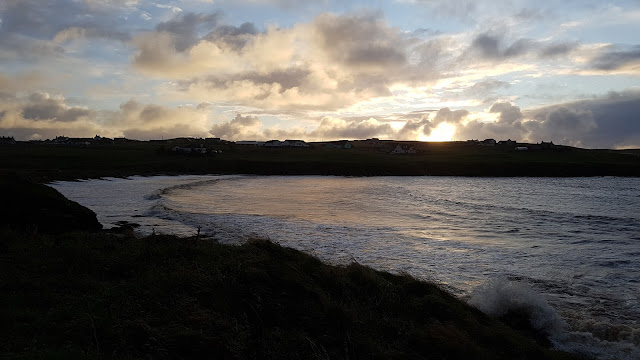 With incoming weather we made our way south and explored around Loch of Spiggie where 15 Whoopers and a raft of Tufted Duck bobbed but the quarry where the first Siberian Accentor was last year only contained some Song Thrushes, two Robins and sheep poo...


Grutness called and I refound the Little Bunting in the road after about 15 minutes but it took a little while longer to get some superb views after it was flushed by an inconsiderate muppet that wanted to get closer to the Redstart on the same fence. 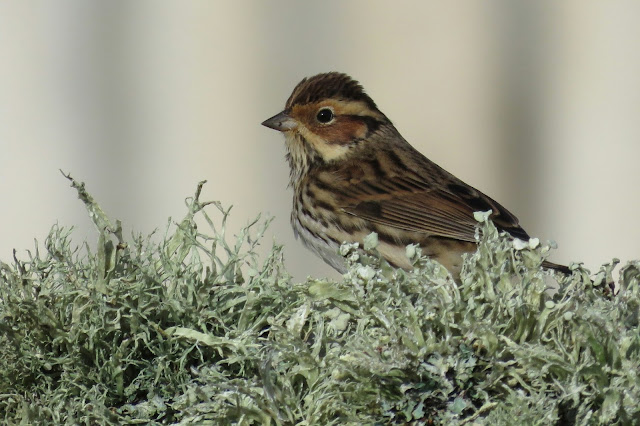 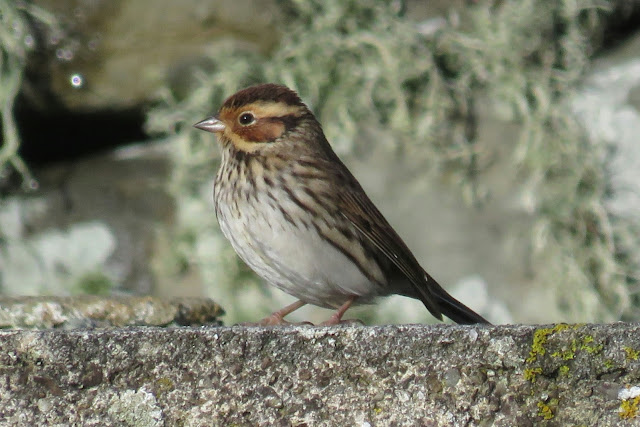 A Mealy Redpoll dropped onto the lichen covered wall and Redstart, Blackcap and Goldcrest all popped up too while a House Martin hawked low over our heads. 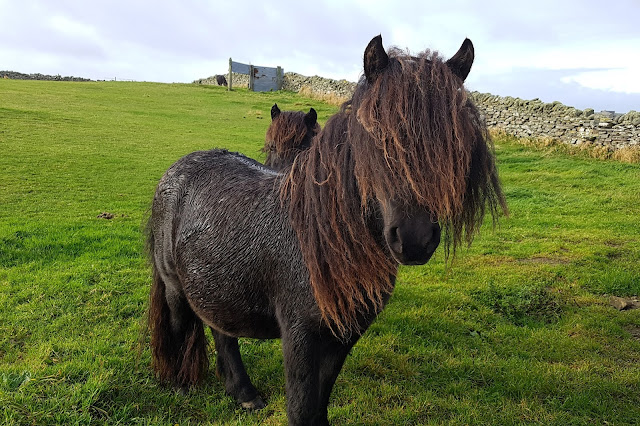 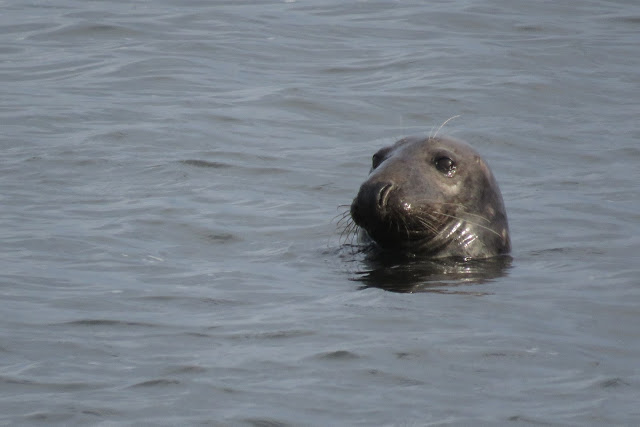 The Sumburgh quarries and environs added three more Redstarts, heaps of Robins, Blackbirds, Goldcrests and Chiffchaffs and a lone Dunnock but the head itself was too windy and the next wave of rain was on the way so we escaped but not before seeing four Risso's Dolphins and three high speed Long-tailed Ducks. 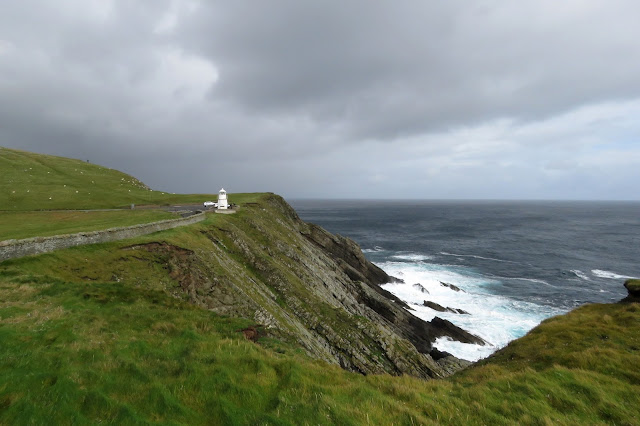 Pool of Virkie and Exnaboe added a nice list of waders to the trip with Sanderling, Curlew Sandpiper, Grey Plover and Black-tailed Godwit as well as 11 Barwits and a good number of commoner species. Two immature drake Goosanders were a pleasant surprise as the fed right alongside the car. I have never seen them swimming with their tails up before. Another new bird for the Shetland list.


After a surprisingly successful dash back to Sumburgh to locate Peter's wayward radio we headed back inland.  The Common Crane that we saw last year was striding about a hay field near Hillwell with Rock Doves for company while Swallows hawked around so low to the ground to prevent them hurtling into the distance. It was not even possible to get out of the car and required some shuffling around to view! A Gadwall and four Moorhens on the Loch were new and several Wheatears got blown off of roadside posts while the juvenile Little Stint up the road at Noss was found feeding in the flooded, slurry soaked corner of a field with Pied, White and Grey Wagtails as companions. A Rock Pipit present looked bigger than it!


The wind was still increasing and so we were encouraged by team leader Bradders to check out some notionally sheltered easterly sites including:

The reverse waves of Boddam... 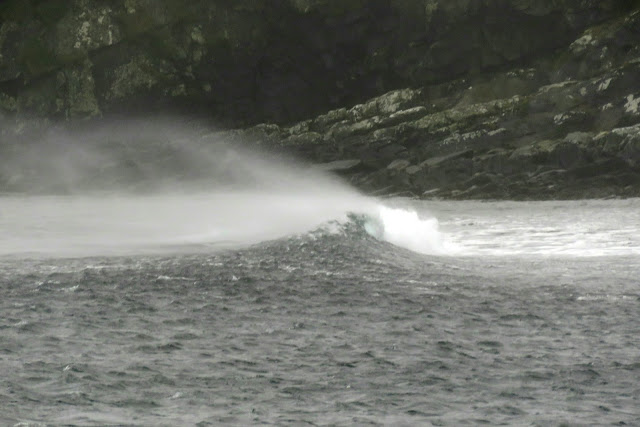 The damp Golden Plovers and  soggy Skylarks of Voxter...

The wet waders of Levenwick...

you need sound for the video to get the full effect...

We knew when to call it a day and eventually persuaded Bradders of this too and a nice cup of tea and my special spag bol was calling... oh and a beer.
Posted by Howard Vaughan at 13:40 1 comment:

It dawned clear and bright and we headed out early doors to thoroughly work Hoswick. A Great Northern Diver was in the bay from the living room and our first YBW called from the garden, audible from the hall... so not too bad a start while still pulling on the Muckmasters.


Between the four of us we covered the entire village and in my eastern section I found a Redstart, seven Willow Warblers and three more energetic YBWs. Robins flicked around in the sunshine and the local plump spotty Starlings positively glowed. Three Grey Wagtails came in off and a few Chaffinches pinged about.

We picked up the car and trundled up valley to pick up Peter who had just found a Reed Bunting which we all managed to see, albeit distantly. This is a good Shetland bird and new one for me like so many species so far!  A cracking but silent Tree Pipit crept along in front of us and Redwings, Song Thrushes and countless Mipits adorned the fence line. Snipe erupted from the ditches and a glance out to sea revealed that some interesting weather was coming our way and that Sumburgh was already getting hit.

As such we retreated and popped over the hill to Sandwick to look for the putative Siberian Oystercatcher. It was not on the beach so we drove down to Noness as it was now raining and discovered our second Reed Bunting amongst the ruins of the various skeletons of long dead Robin Reliants. Another Redstart and several Robins were seen but there is no cover down there so we headed back to the bay where an obviously normal Oystercatcher was just departing.

The fields around the church were full of Golden Plover and we discovered a single Bar-tailed Godwit, four Ruff and a few Redshank, Ringed Plovers and Turnstone amongst them but no funny Oik. A quick look at the bay again only confirmed its absence but three Twite showed well in the cemetery.

In a quandary as to what to do, we had just decided on a northwards jaunt and invoked the power of the ever so slightly mangled Double-Deckers. I had barely got the last mouthful in when I picked up the Pied Mollusc-lover in the Plover field! An odd looking, skinny bird with seemingly longer legs than the 'normal' ones and a brown back contrasting with and black head and chest. As for nasal groove percentages...


With that we piled back into the car and headed back north to Melby where a Rustic Bunting was now performing on the road where we had the Great Northern Diver. Fortunately I refound it ticking in the willows within a couple of minutes and it showed very well, grovelling in the verge over the next half hour. Tysties bobbed offshore and a Wheatear was on the beach with the Turnstones and Ringed Plovers.

News of a Pallas's Grasshopper Warbler way up at South Collafirth sent us back on the road as Peter had not seen one and it had been 16 years since my only one up on Blakeney Point. A purposeful 45 minute drive later we joined the crowd to take our chance and over the next hour superb views were had in flight and even on the deck at a very well organised twitch. Thanks especially to Andy Mears who let me look through his scope just as it climbed up into the open in the nettles. 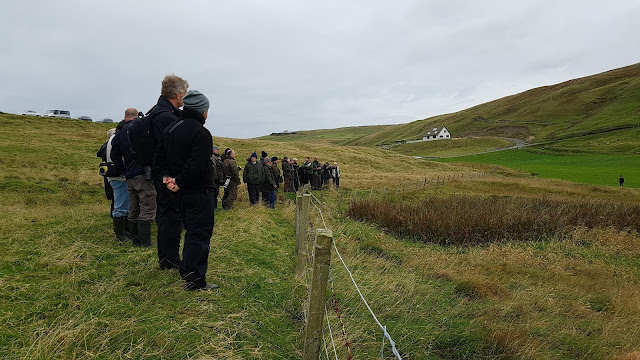 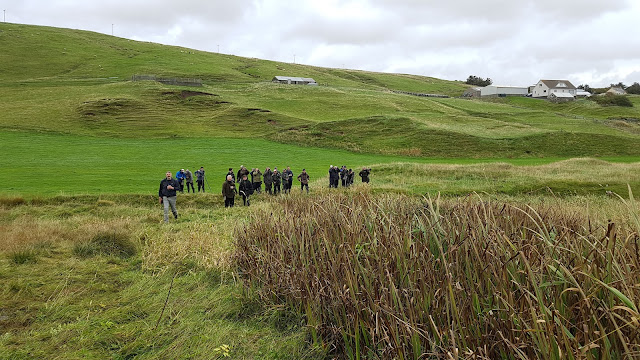 With the rain setting in we took our leave and within a few minutes we were in a horizontal deluge. Late lunch at Brae and then a drive out toward Aith (stopping for Tiffin at the Roadside Cake Fridge of Happiness) for a joke look for a Short-toed Lark in now truly appalling weather.

I suggested that it may well be on the road as that is what they like in Lesvos and we drove past some desparate soul out tramping the fields and sure enough the sodden little blighter popped up right in front of the car and despite its waterlogged appearance it was feeding well on worms but could have certainly done with some time with a hairdryer!

With that we called it a day and headed back to the snug cottage in Hoswick, and we were soon replete from a gargantuan chicken Sunday roast cooked once again by Peter with the wind and rain still howling outside.