An opportunity to go somewhere new had me speculatively exploring a stretch of the Medway well up river at Teston Bridge in the hope of finding some dragons, damsels and hovers. 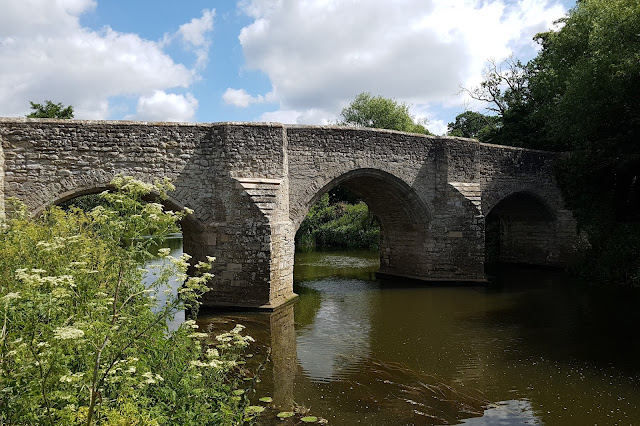 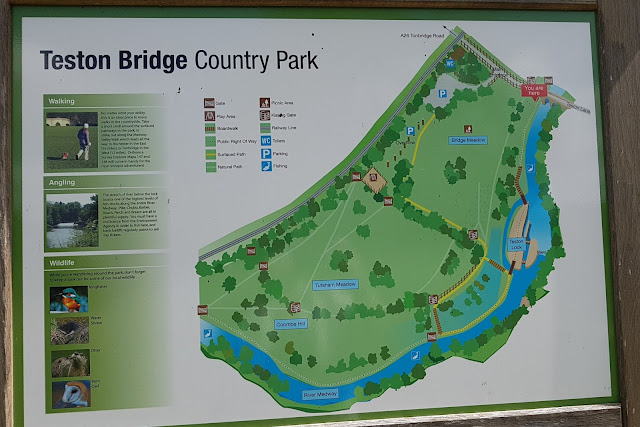 It was a cracking bit of river with an old stone arch bridge, an active lock and series of canoeing rapids that in no way spoilt the atmosphere or bank habitats. I basically had the place to myself bar a few fisherman and dog walkers. 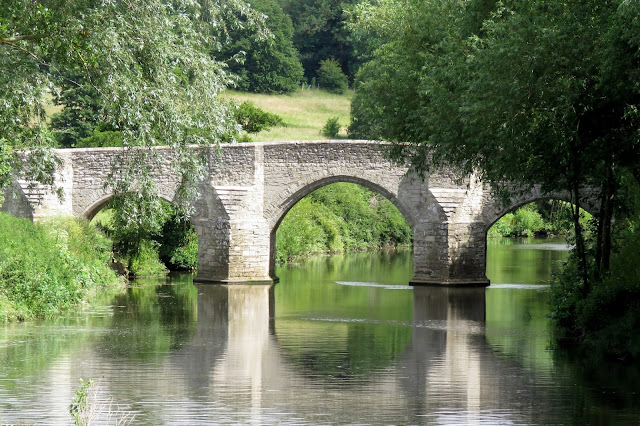 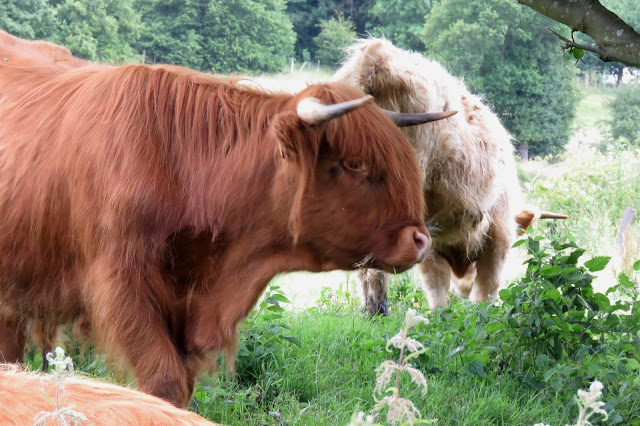 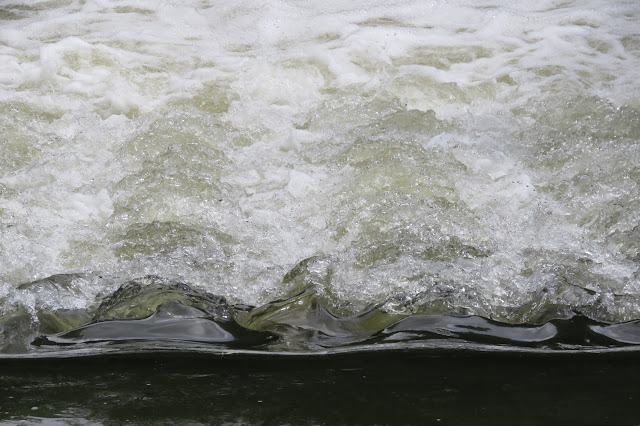 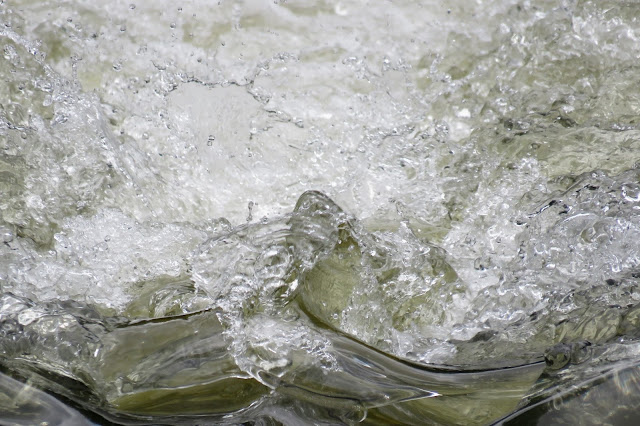 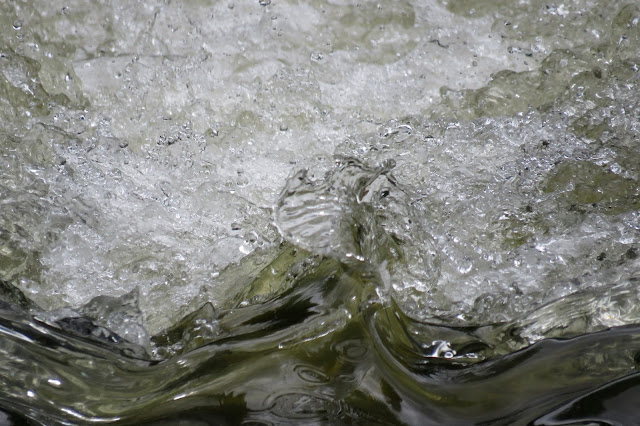 The banks were some of the most florally rich I have ever seen with swathes of Hemlock Water Dropwort, Hemlock, Hogweed, Angelica, unfortunately Giant Hogweed and Balsam, Meadowsweet, Comfrey, Branched Bur-Reed, Water Mint, Water Forget-me-Not and a couple that I am having a little trouble with. 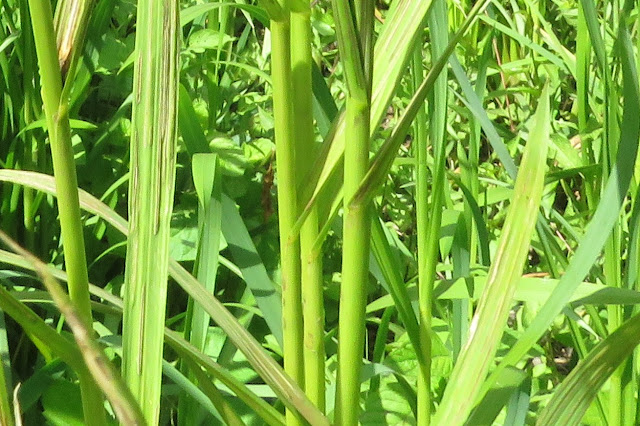 Arrowhead and Yellow Water Lily skirted the margins and Banded Demoiselles and Red-eyed Damselflies battled on lace wings for the best perch and pad.


Azure, Blue Tailed and White-legged Damsels ranged further away from the slowly moving river. The latter were my first for many years and seemed to like flying around with their legs dangling...


I was surprised at the lack of bigger dragons and only found a couple of Ruddy Darters. Hovers were similarly scarce despite the profusion of blooms but I did see a smart yellow form Volucella bombylans and a few Episyrphus balteatus.


My first Meadow Brown and Small Skippers of the year were on the wing in the meadows where countless Honey Bees were foraging on the Red and White Clovers.

Birdwise it was unsurprisingly quiet given the heat but there were Treecreepers and Bullfinches around the car park and a family of Grey Wagtail around the weir did, as always, bring a smile...

Posted by Howard Vaughan at 15:00 No comments:


News broke yesterday morning that the erratic Elegant Tern seen in Hampshire during the week had been pinned down to the Sandwich Tern colony in at RSPB Pagham Harbour in West Sussex. I was at work and was not overly fussed but it would have been a good bird to catch up with as my only UK encounter was with what was almost certainly this species off Canvey Point in Essex on the 10th September 2002 with the late Ken Barrett and before you ask, yes we did submit it as orange billed tern species but did not hear any more.

Perchance, Clan Bradnum appeared for a walk around the reserve and the fact that David was here and not there led to the obvious question about a visit this morning and thus after some slight rota tweaking that is what was planned.

A little after seven this morning we arrived at Church Norton knowing that the bird was present and hoping that there would be one space in the tiny car park to save us a lengthy walk. Andy Lawson magically appeared and kindly gave us his spot which I pranced around in till David could turn his monster car around and fill it! It was then a swift stroll down to the harbour beach where we could easily see the colony on the main island and within just a couple of minutes he (we know he is the colour ringed French DNA tested male) got up and had a fly round waving that ridiculous long droopy almost yellowy tipped  tipped deep orange bill.  In the scope the bill shape was obvious but in the bins the tip bled out and the bill looked shorter. The bird felt a little heavier and more languid than the Sandwich Terns and seemed to have an offset dark wedge in the primaries and a darker bar on the secondaries especially from underneath which was odd. 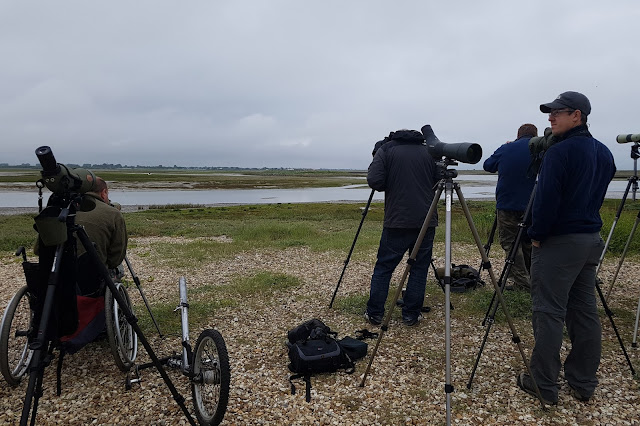 Over the next 30 minutes or so we had some excellent flight views and one very nice but brief stop on the mud when the sleek in-flight mode cap became a black Billy Idol punk do like it was being blow dried from the back! After this it flew strongly out to sea to the west. 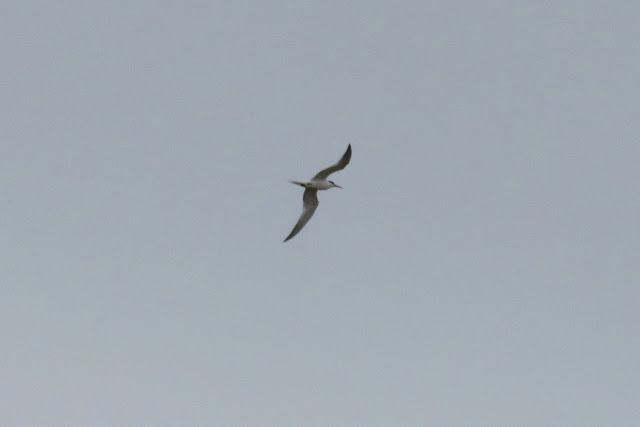 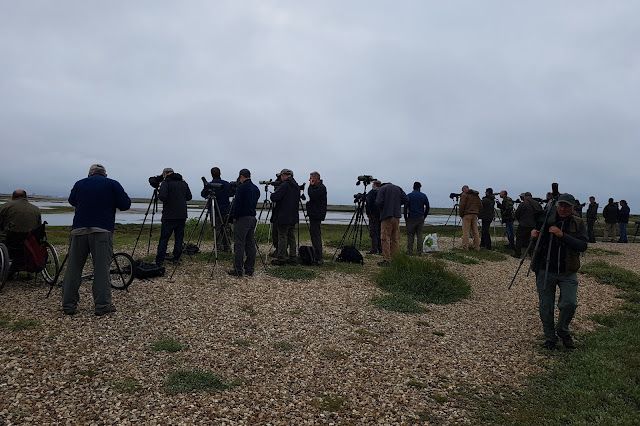 We stayed for about an hour and chatted to all and sundry while scanning for his return and watching the activity around the colony. About 120 Med Gulls were arrayed on the mud although these birds had only arrived a few days beforehand after deserting another local colony but I love Med Gulls and their calls resounded across the harbour mixed in with the bickering of Black-headed Gulls, the ‘erics’ of Sandwich Terns, dreads of Common Terns and mechanical grindings of the energetic Littles that hunted the channel.

A first summer Little Gull with a full black hood was also seen and a family of four Peregrines were perched up on some island hillocks not far from the terns and gulls and both adults put on a superb display as they tried and failed to bring down a Feral Pigeon that likewise put on a superb turn of speed.

With the crowd of people who had not seen the bird building we decided to make a move and head for a quality McBreakfast and in any case the family of continually yaffling Green Woodpeckers was beginning to grate!

Post-breakfast we decided to head west into the New Forest as the cloud that had been a godsend at Pagham had started to dissipate and it felt like some skywatching was in order from a spot that may or may not bear a strong affiliation with an imperial unit of land measurement. 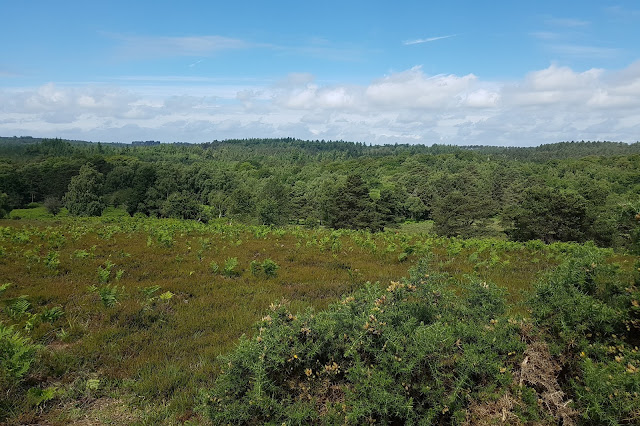 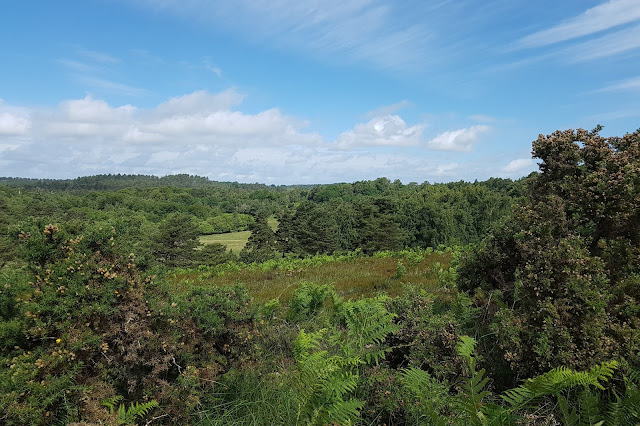 The next few hours were superb with near constant Goshawk action all around us and although they were mobile I suspect that four or five were seen including a monster female. Buzzards were often up too and Peregrine and Hobby were added but it took quite a while to find a Honey Buzzard but I eventually picked out a promising dot that came closer and closer and thankfully proved me right.

This male bird ended up giving me my best UK sighting since the October influx of 2000 and dropped below the tree line in front so that all the colour and markings could be discerned before landing out of view.

To think that it is just over 30 years since my first encounter with this enigmatic species at Denny Wood on a summer holiday with the family one August. I can still remember him climbing up out of the trees and spiralling up into the blue before clapping his wings above his head and plummeting on a roller coaster dive that took up back up for another stall and fall. 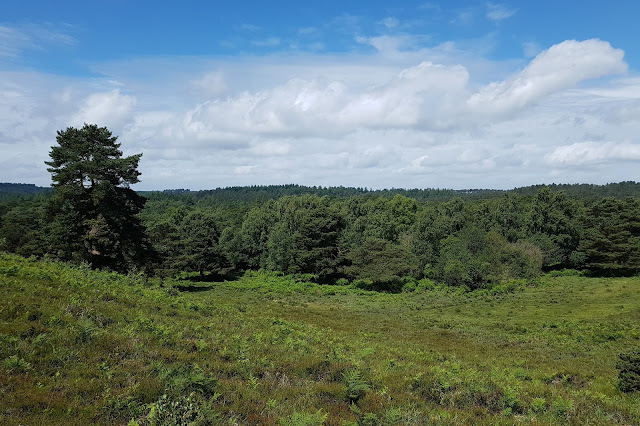 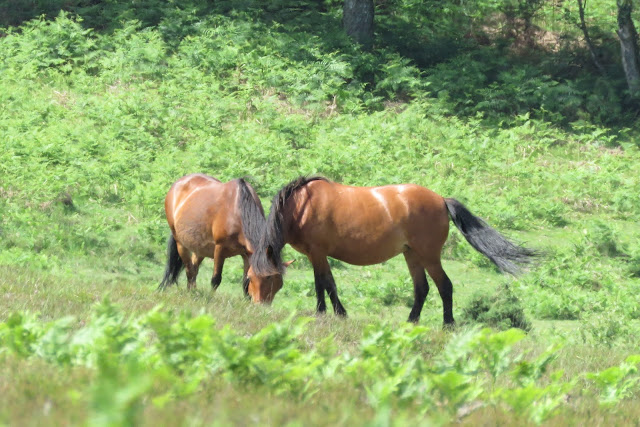 There were not just raptors on offer with Hawfinch, Siskin and Crossbill all bounding across the view while Woodlark, Meadow and Tree Pipits sang and Stonechats kept look out. I did see a Golden Ringed Dragonfly on the way up but never found it perched.

Back down near the cars a short walk added Marsh Tits, Treecreeper, singing Firecrest and my first Spotted Flycatchers of the year.

We toyed with the idea of doing more of the Forest but cut our losses and headed north back up the A31 towards Frensham Great Pond where after some skilful foot navigation we popped out right next to the first summer male Red-footed Falcon that was enthusiastically catching insects on the ground by utilising the multitude of dead stumps that stand testimony to a serious fire in recent years. 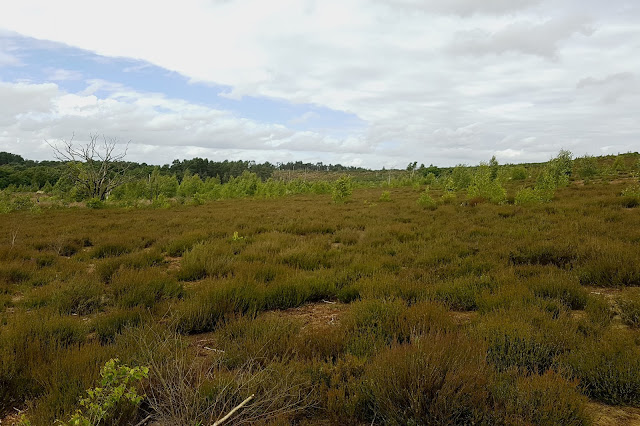 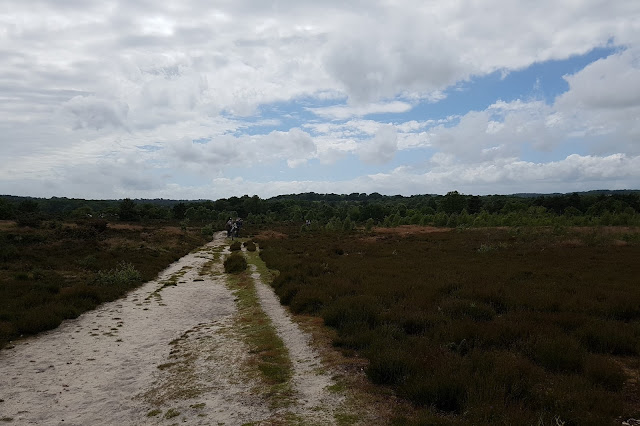 He was not especially advanced and still had a pale throat and underparts that were quite buffy in places but a Red-foot is always a joy to see whatever the plumage and this one was no exception.

A Dartford Warbler called as we made our way back to the car before the final leg of the journey home and although we added Kestrel and Sparrowhawk we never did find a Red Kite to take us to nine raptors for the day.

It was good to be out in the field again...
Posted by Howard Vaughan at 20:00 No comments: