My second Land of the Fanns walk in the Ingrebourne Valley yesterday was another rousing success and I actually stayed on afterward and headed back to some on the more invert heavy areas. I took the guests on the same route as Monday and by the end of it we had found a wonderful suite of summer wildlife. 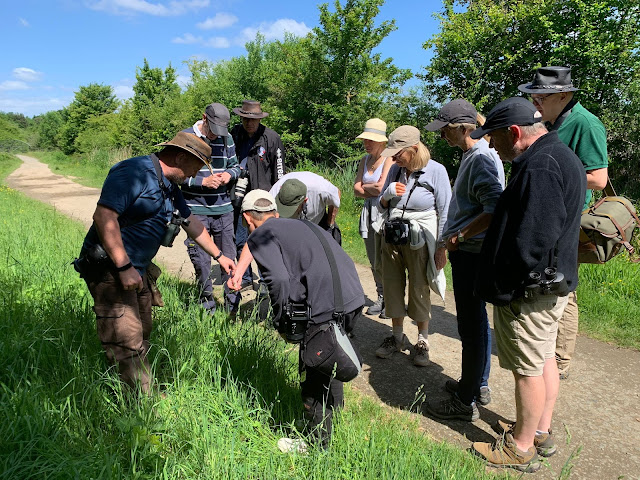 Not too shoddy for a not overly warm late May day.  I only saw one Latticed Heath moth this time but did find several Mother Shipton with the beaky old hag caricature on its wings along with Straw Dot and a couple of new Micros that Antony kingly identified. 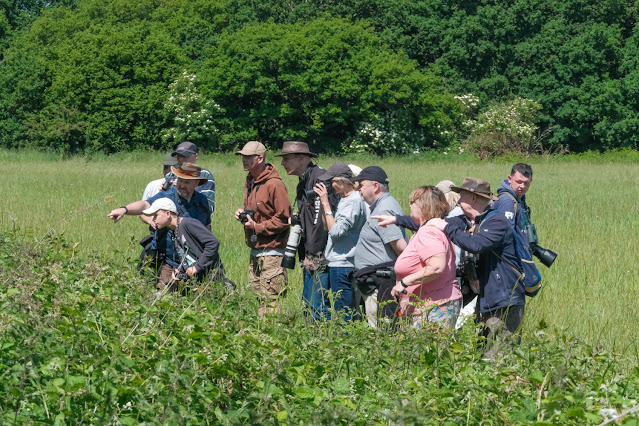 There were so many more Odonata representatives on the wing with dozens of Azure and Common Blue Damsels with a smattering of Large Reds and Blue Tails along with dazzling Banded Demoiselles decked out in metallic blues and greens.

Two Emperors and singles of Hairy Hawker and Four Spotted Chaser made it feel more summery.

There were some good Beetles once again with the chunky Cantharis rustica and Oedemera nobilis but with the addition of the super shiny Plateumaris sericea that were living in the Reedmace and Branched Bur-reed.  They were so metallic as to literally glisten and sparkle.  These are a difficult family but I think the spur on the hind femora is a pointer.

There were Alder Beetles on the, well, Alders (along with a couple of interesting Moth leaf mines) and we found Green Dock Beetle larvae in the, umm, Docks.

Yvonne found a super funky Figwort Weevil (guess where) and getting a picture when it was only a few mm long was tricky and it looks like it has an eye in the middle of its back. There were four Ladybird species seen and we found three stripy Wasp Longhorn Beetles in the Maples.

The nymph stage of Meadow Grasshoppers, Coneheads, Roesel’s, Dark and Speckled Bush Crickets were all now in evidence and it will only take a few more instar changes before the grassland is alive with the sound of rubbing knees.

The Hoverfly selection was again pretty good with both Chrysotoxum cautum and Xanthogramma pedissequum proving popular along with quite a few more Anasimyia lineata on the Buttercups.  My star hover was my first Leucozona lucorum for some time.


Broad Centurian Soldier flies and another larger black species were seen and one of their relatives (although it does not look it) was the long legged Chrysopilus cristatus.   I found two Sicus ferrugineus with their freaky swivel heads as they look for Bees to clasp in a loving, egg laying embrace and a Lacewing larva was waiting in the heart of an Oxeye Daisy.  A small hunched Robber Fly appears to be Dioctria atricappilla.

There were Brown Tail moth caterpillar tents in the Hawthorns and a little huddle of Emperor moths cats that still had a long way to go before becoming pink spotted green monsters. We also found Lackey Moth cats with their blue stripes, a punky young Vapourer and what a plump grey one that Antony thinks may be one of the Swifts.


Figwort Sawfly was the most impressive of that tribe that we encountered and there were plenty of bugs too with the very smartly marked but very small Grypocoris stysi being the pick followed closed by the even tinier Creeping Thistle Lacebug.


White-lipped Hedge Snails and Kentish Snails were found under leaves and there were numerous Tetragnatha and young Orbs including an identifiable Larinioidies cornutus and a male Araniella sp that was looking very Crab Spider like.

Add to this bubbling and singing Cuckoos, a Buzzard, Hobby, Swifts, displaying Lapwings and a rather large Pike that tried to gulp down a Demoiselle and it was a fine session out in the Valley.


I think it opened the eyes of a few local people as to the wealth of life on their doorstep in somewhere as busy with other human and canine traffic as the Ingrebourne.