My journey home yesterday almost included a visit to Crabbles Bottom Orchard for a bit of Hoverating but I had forgotten that the gas and electricity engineer was visiting and had to abandon as I started and thus today I headed back up for another go once it had vaguely warmed up a little.

I consequently spent a happy two hours ambling up and down the bramble and bracken margins with cascades on interwoven Old Man’s Beard and Hop tendrils.  There was still some Privet in flower and the three meadows were magnificently bedecked in flowers. 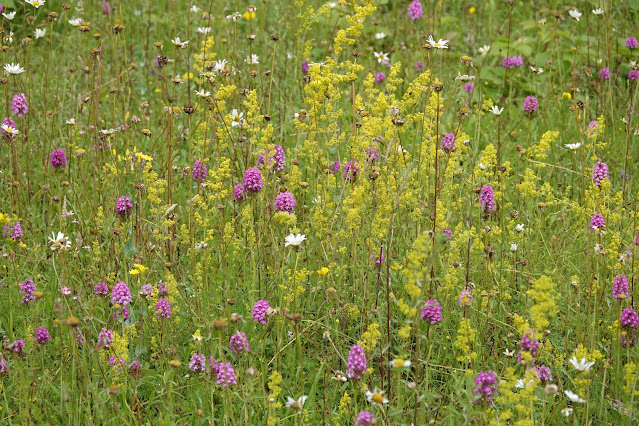 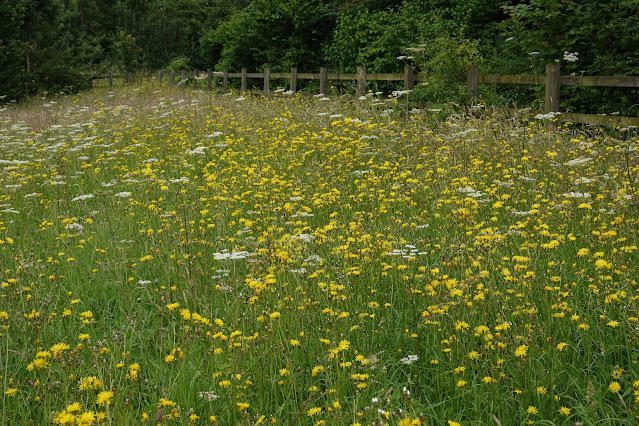 Hoverflies were conspicuous with countless Episyrphus balteatus in all sizes and brightness.  Some were quite chunky and others tiny.  I was looking for Volucella inflata as this was my prime spot last year but found none but was more than happy with a single Volucella zonaria, two different forms of Volucella bombylans and many territorial Volucella pellucens which as usual like to offer you translucent views from underneath.

The latter were sparring with Eristalis intricaria whose territories seemed to be slightly lower as a rule while the Hogweed held three other Eristalis species and three Cheilosia.  There were a few Spaerophoria around and I saw at least one male S scripta and I have yet to see any other species despite them being apparently common.

I saw a Pipizella again and my first male Baccha elongata of the year too although as usual it stayed within the darkest tangles of Brambles and floated about low down in the gloom while a Xanthogramma pedissequum agg was seen briefly.


Pollenia (mostly in a worn state), Lucilia and Sarcs dotted the Brambles and I found a very imposing Golden Haired Robberfly (Choerades marginatus) along with a few Broad Centurions too.


Sicus ferrugineus were on the lookout for Bumblebees to ‘hug’ and their swivel head movements as they scan a flying object are somewhat creepy and several Empis tessellata were similarly on the prowl.

The usual selection of Bumblebees were present and there were quite a few Bombus vestalis although they were all quite faded now.  A single Bombus hortorum was a nice find and for once the two golden bands were very obvious.


There were several smallish Andrenas and a very fresh Halictus rubicundus .  Parasitic Wasps of various shapes and sizes were seen but did not linger for a shot but a small Cerceris Digger Wasp on the Hogweed has been identified a C. rybyensis.

It was sharing its food source with hundreds of Red Soldier Beetles who, unlike the other day, were now getting jiggy with it with an audience of Oedemera nobilis and Rutpela maculata.

Meadow Browns and Ringlets were the commonest Butterflies with a few ‘Whites’ and a small number of Marbled Whites.  Purple Hairstreak, Comma, Red Admiral, Common Blue and some Skippers were also seen while Common and the first Ruddy Darters were noted.  Like so many sites now, there were Blue Eyed Hawkers hunting and I counted seven in the clearings but as usual getting a shot proved frustrating.


The grass was alive with Meadow Grasshoppers along with Speckled, Dark and Roesel’s Bush Crickets.


There were large Pisaura mirabilis on many Bramble leaves and I watched a Labyrinth Spider casting out her silken hammock as she expanded her net.


The carpet of Pyramidal Orchids was spectacular with little cones of pinkness poking through the Lady’s Bedstraw, Common Centaury, Yellow-wort and Marjoram. They were quite varied in colour with some very deep cerise ones through to bi-pink and solid pale pink. 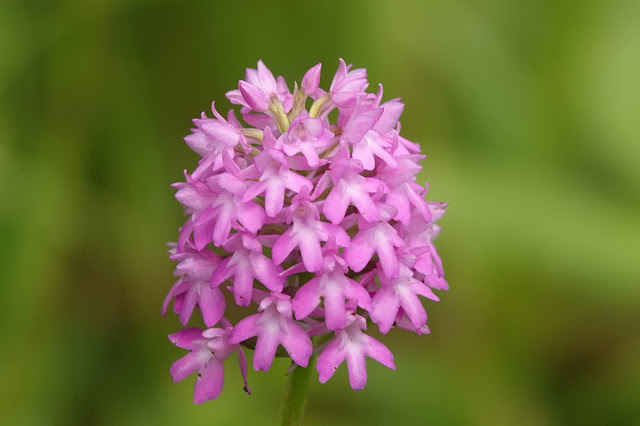 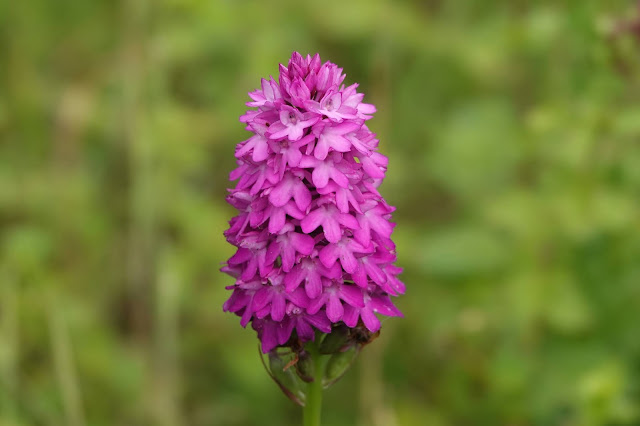 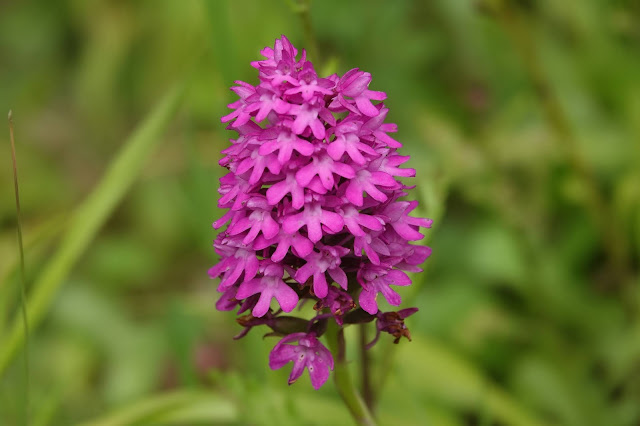 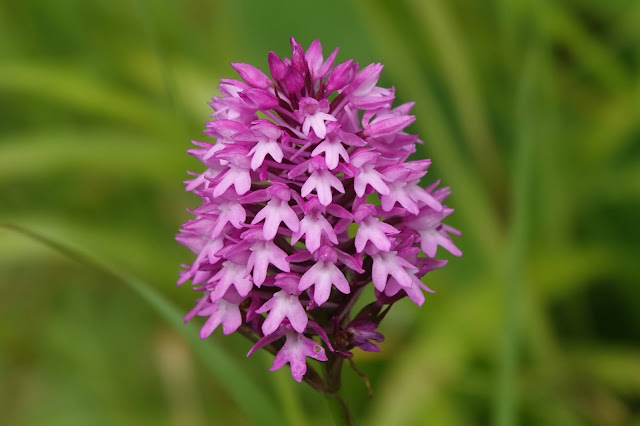 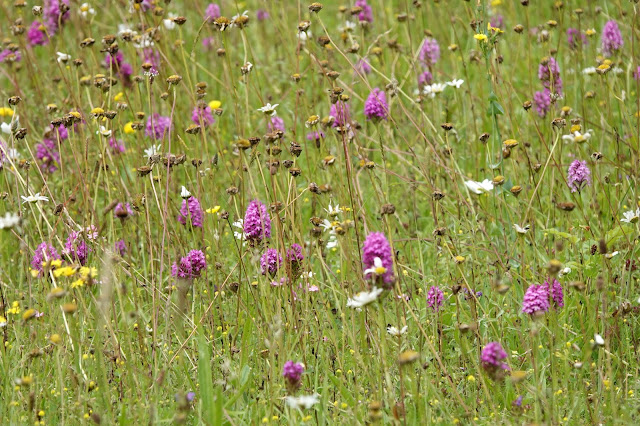 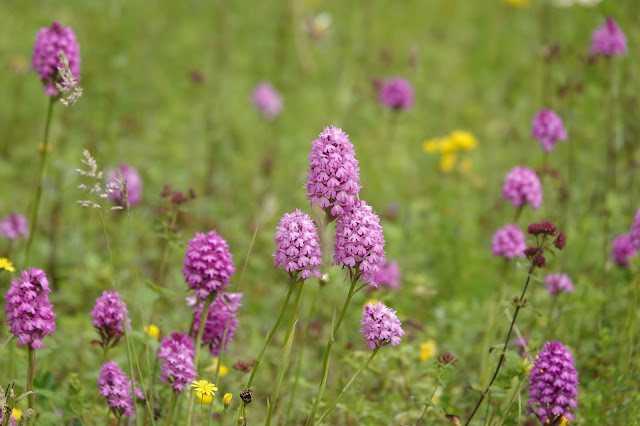 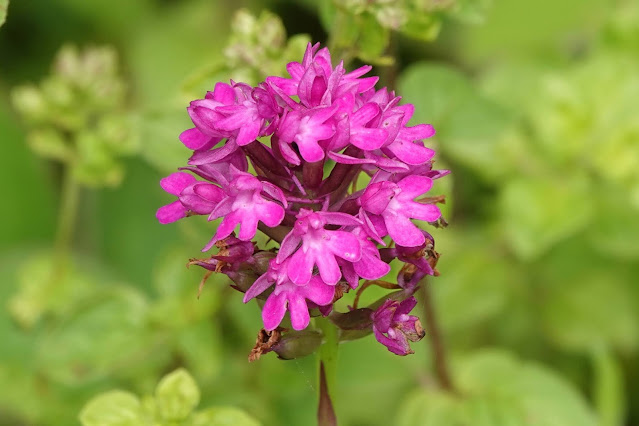 Pyrausta purpuralis and despicata came up at my feet and Antony helped id two other moths that I found and two Oak Eggars rocketed through at near light speed...


I scanned the big Oaks in the hope of a Purple Emperor or White Admiral but there was just not enough sun and to be honest I think I was lucky to see as much as I did given the rain-threatening clouds. The breeze had started to pick up so I ambled back past a family of Bullfinches and made my way home. 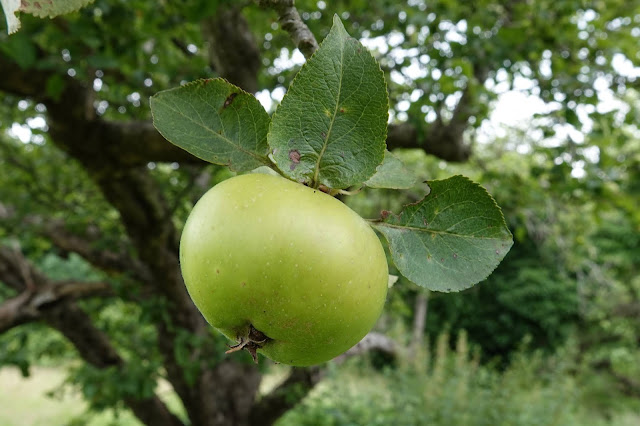