After an adult Franklin’s Gull spent all of the day before at Breydon Water I opted for an early start with the Woodward brothers to give it a go. We decided that the best way to make sure of seeing this lifer would be to walk all the way east from Burgh Castle to the ASDA car park at Great Yarmouth.  This we thought  would prevent it slipping past un-noticed. The walk was a real bind as the tall wet grass not only made walking difficult but also made my hayfever flare up something rotten. The sun decided to hide behind  thick cloud and it frequently drizzled and to cap it all we never even saw the bird!

There were a couple of Sandwich Terns and two Littles amongst the Commons Terns and two 1st summer Little Gulls and an adult Yellow-legged Gull at the east end but no North American Larid.

There were plenty of waders though with Knot, Grey Plover, Barwits, Dunlin  and Turnstones. Fortunately I managed to get us a lift back to Burgh (but I have no idea who from!) from where we headed south to Ness Point where only a few Kittiwakes were present.  A look for the Carlton Colville Shrike drew a blank but we all had a kip, some Redpolls and a bonus singing Quail.  Minsmere was the last stop where we saw nothing (apparently) apart from two Marsh Harriers and had an hour long game of eye spy...

Another of Peter’s ‘Let’s head up the M11 anyway’ trips that saw us swinging into Fordham where 30 noisy fishermen were getting ready for a competition.  There were only a few birders around but I spied Jack Levene and was about to ask him what he was watching when the male Icterine Warbler that had been around for a couple of days suddenly burst into glorious song.

Pretty good views were had as it bounded around the poplars with deliberate actions.  The Golden Orioles were initially not very co-operative but two pair were seen very well from the tow path after a while along with many Garden Warblers and a family of Great Spots. Ringlets, Common Blues and Large Skippers were also seen.  (Can you imagine now the volume of invert stuff that would have now featuredin a blog post?)

From here we drove to North Wooton where the usual pair of Montagu’s Harriers showed nicely upon arrival.  Several Marsh Harriers were around too including the 16 year old male bird with the big white rump.  After a pint at the Black Horse we visited Wolferton which was quiet bar a female Marsh Harrier, Sparrowhawk and lots of Siskins.  Tree Pipits sang from the wires and a female Golden Pheasant led three chicks down the path away from us.

A final look back at Fordham revealed nowt so we wiggled back home cross country to avoid the traffic.

I really should stay away from the Broads... Caspian Terns were the objective for the day but as usual things conspired against us. We started at Breydon where there were just a few waders and a line of glum faced birders telling us all we needed to know about a lack of carrot faced terns so we moved onto Hickling Broad where there were again a few waders but the only large orangey red thing was Ian’s t-shirt.  A Grasshopper Warbler was reeling on the way back out and then down to Filby Broad where even more birders had the same expressions before returning to Breydon Water where seeing Ed and Chris Parnell was the highlight.  Do we stay or go home?  We had had enough and headed for home only to find out that they came into Breydon late evening... typical.  There’s always tomorrow!

A lazy start after the long and tedious day before but at least the Black-winged Stilt was at Trimley and after the long walk down we were made to wait four and a half hours for this female bird to appear (I still can’t believe we waited that long!). 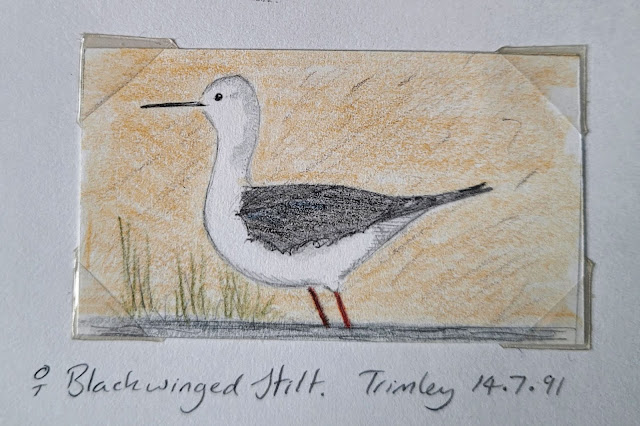 We spent our time counting the waders which included four Whimbrel, 30 Blackwit, Greenshank, Spot Red and Ruff while a lone summering Brent Goose was seen.  The Terns were still frustrating twitchers in Norfolk  and we made the right decision to continue with our Suffolk wanderings.  After a cup of coffee at Nan and Grandad’s in Felixstowe we popped down to Languard where there were a few Little, Sandwich and Common Terns, Red-legged Partridges and Ringed Plovers.  The journey home was lengthened by a trip cross country from Witham to home due to bad A12 traffic which was a most pleasant way to end the day.

Roy and I gave Russell and Sarah a hand at banging little numbers into the Hornbeams at Gernon Bushes (although I can’t remember what for) and we encountered three families of Nuthatch and two of Marsh Tit on the circuit and both Spotted Flycatchers and Hawfinches were heard along with an early Siskin.

A day up in Norfolk with the Woodwards and Simon Papps that started at Fordham where the Golden Orioles were suitably noisy and showy but the Icterine warbler had gone quiet a few days earlier. From here we headed north to a new ‘secret Honey Buzzard site’ at Swanton Novers that news leaked of after a Black Stork was seen there.  Great views were had of a dark phase adult on several occasions.

Onto Cley where our customary Sparrowhawk circled the car park but the reserve itself was almost devoid of life but recompense was had along the East Bank with a pair of hunting Hobbies out catching insects along with an immature male Marsh Harrier.  Curlews and Whimbrels fed in the pastures and a Grasshopper Warbler reeled.

West now to Wolferton where a male Goshawk was seen briefly and Siskins were still twinkling away and the male Montagu’s Harrier gave us the desired views in short order at Wooton.

With the day drawing in we decided to head even further west to some old gravel working near Thrapston in Northants to try for a Savi’s Warbler. This reeling male had been present a week on a beautifully vegetated pool and was heard and seen soon after arrival.  We watched it for over an hour with an accompaniment of Reed and Sedge Warblers.  Yellow Wagtails flew over regularly and a Black-necked Grebe was seen amongst the Geese and Ducks. A fine end to the first really good day out in ages.

An evening out with the family to the Brecks starting, once again at Forham where four Golden Orioles were seen in flight and some song was heard before cross country bimble to Brandon for dinner at The Ram before starting our walk at Mayday Farm at 8pm.

It was as quiet as expected on the walk down but a male Golden Pheasant stalked alongside us in the Moonberry before crossing the path.  The clearing had been enlarged since the winter and Yellowhammers, Song Thrushes and Coal Tits were heard as the light faded.  The first Nightjar started churring at 9.30 just as the moon slipped behind the clouds and before long we were surrounded with singing males with frequent wing claps and the coo-ick of the females.  A medium sized Bat zoomed around and Mum and Dad had a Muntjac and Roe Deer were both seen and heard before it got almost too dark to see and it was time to feel our way back to the car.

Another Norfolk jaunt with Pete starting at Swanton Novers where both the Honey Buzzards were seen well overhead before we made our way to Cley. A Gropper sang once again along the East Bank and Bearded Tits pinged around while the Whimbrel flock was now a fantastic 84.  There was time for some beans on toast at the Coastguards Cafe and then a phone box to ring birdline but all was quiet so we went to the Three Swallows for a pint before trundling back south to Lackford Lakes. An enjoyable hour was spent watching the waders with 200 Lapwing, Black-tailed Godwit, three Common and six Green Sandpipers.  Common Terns were still feeding young and numerous teenage Herons paddled in the margins. Two female Ruddy Duck were only my second Suffolk record as they dozed with tails poking skywards but it was the two drake Common Scoters that made the day as they paddled around before suddenly deciding it was time to move on.

The poxy Caspian Terns had been seen on and off since our last failed attempt so after driving up to Felixstowe the night before, myself and the Woodwards found ourselves at 6am at Hickling Broad staring at Rush Hill Scrape.  They were not there...

We stuck with it for several hours and found 12 Green, Wood and Curlew Sandpipers, Ruff in all plumages, Dunlin and noisy Avocets.  Beardies were vocal and two Bitterns gave prolonged flight views as they circled around.  There were lots of butterflies but no Swallowtails.

We met some birders who had been at Breydon from dawn to 8.15 so we headed that way only to be told that one had dropped in for 30 seconds at 8.30!  That turned out to be the sole sighting of the day and although we stayed in the area till dark we were once again thwarted.  We moved between Breydon, Filby and Hickling for the rest of the day and although we saw no different birds we did at least connect with the magnificent Swallowtails and some good Dragonflies.

The tiring journey home in the dark prompted a visit to Minsmere to listen to the Nightjars around Westleton before tackling the A12 in a torrential thunderstorm and getting home at 1.30 the following morning.

A quick visit to Dagenham Chase produced lots of young birds including four families of Reed Warbler while 14 Lapwing and both Green and Common Sandpipers were on The Slack along with 56 Black-headed Gulls and three Common Terns.