This morning I visited one of my Bulphan and Orsett Fen farms for the first time and after meeting Steve White at Fair Play Farm I was let loose to be shown around the land by my friend Ruth who already had permission to walk there.  As is the norm around here it is an arable farm of wheat, barley and beans but despite the retreating rain the sky was full of the sound of Skylarks singing heartily.

Our circuit took us along the margins and across the fields.  Many had reasonable edges and most had well maintained and no overly sculpted hedges.  These were wide and dense and all had mature Oak, Ash and Willow standards dotted along them. 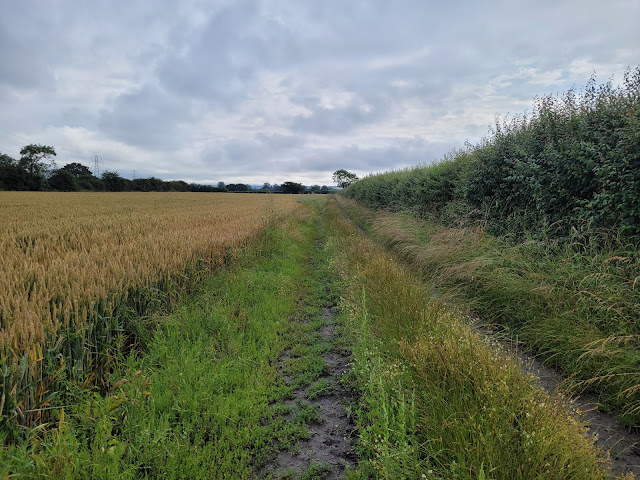 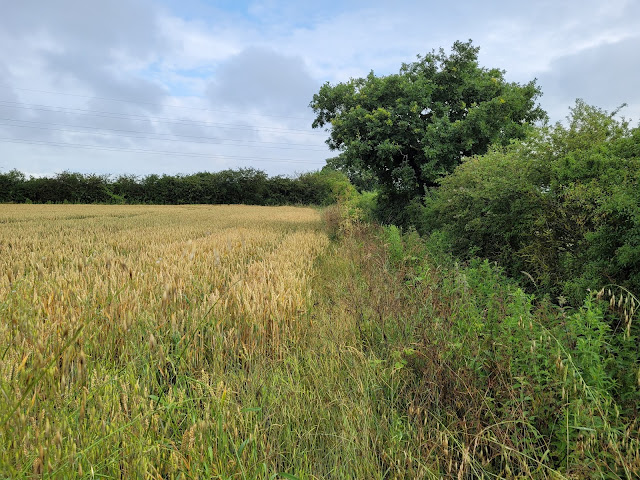 The uncultivated strip was very tight to the edge but was stuffed full of flowering Composites, Hogweed, Brambles, Vetches and Ragwort and was alive with hundreds of Meadow Browns and countless Episyrphus balteatus  along with and dozens of Sphaerophoria (some of which were certainly S scripta). Amongst them were some tiny Eupeodes and the odd Syrphus, Platycheirus and Eristalis tenax.

Small and Essex Skipper, Red Admiral and both Small and Green veined Whites were also seen.

Yellowhammers sang from each hedge and a good flock of 60 roving House Sparrows made me think that some nest box terraces on the barns would be in order. Reed Bunting and Cetti’s Warblers sang from the adjacent water works site and families of Whitethroats skipped ahead through the crops as we walked along.

Rather bizarrely a Curlew spent about twenty minutes flying around called although neither of us actually ever saw it while two Ravens kronked into views and perched up on a pylon before heading low and north.  Amazing to think how rare they were round here not too many moons ago. Buzzards and Kestrels were seen but the local Kites were in lazy mode and had a lay in.

We got back to the car soaking from the knees down and weighed down with clay laden boots but it was good at last to get out onto a farm for a look around. 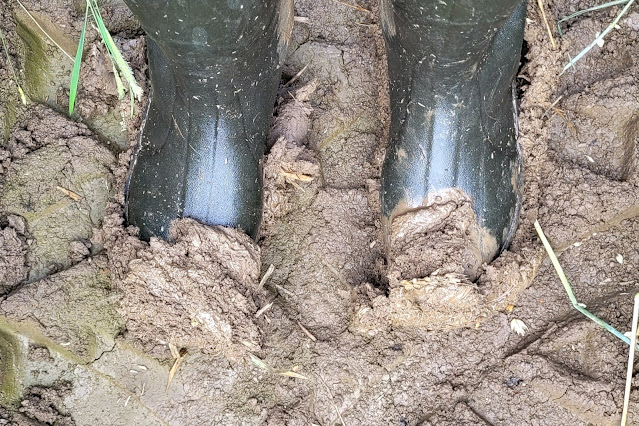 I headed homewards afterwards as technically it was my day off but stopped at a little meadow inland from Gravesend where I had been told I might find a mighty Lizard Orchid. The public footpath led me through a low growing carpet of Self Heal, Creeping Buttercup and Marjoram to a scrubby patch where this monster lurked.


It was very easy to find standing so tall amongst the grasses, Agrimony, Marjoram and Greater Knapweed.  I had a bit more time with it than the roadside ones the other day and almost any Orchid that you get close to will reveal a hidden inner being staring back at you – in this case Moya’s Pilot from Farscape...well in my deluded head anyway! 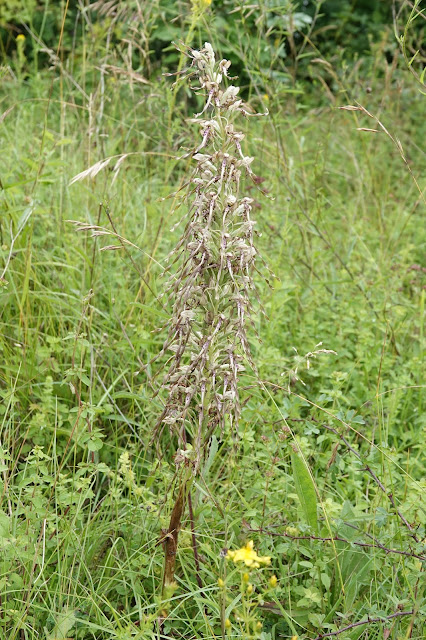 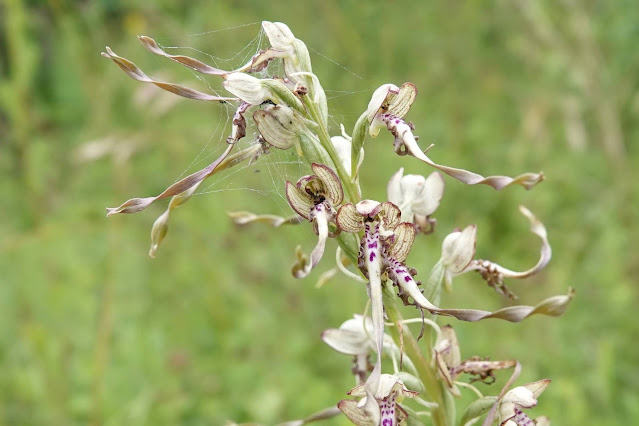 There were two big patches of Eryngium glowing blue and violet and I suspect that they are a garden escapee and tiny little Eyebright flowers winked from ankle level. 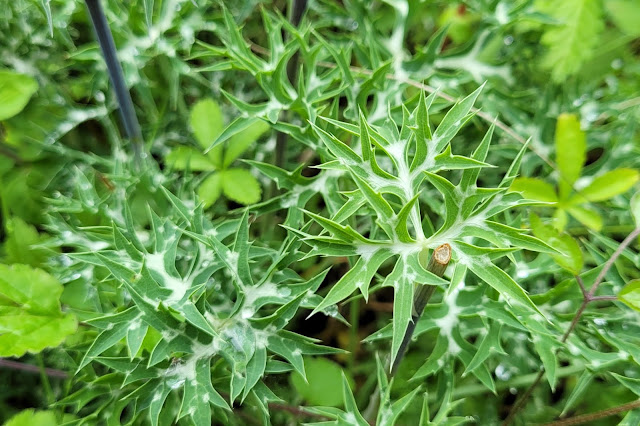 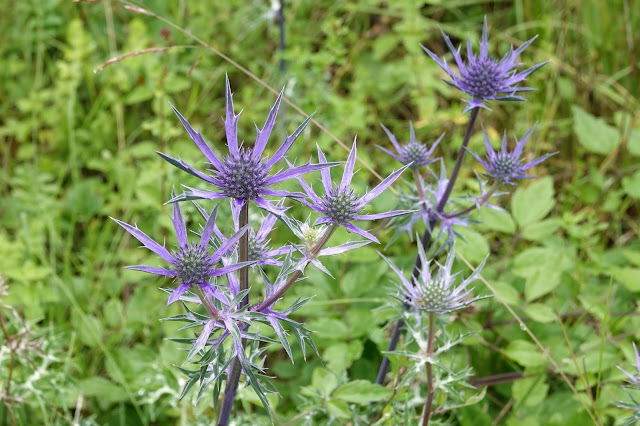 Marbled Whites flitted around despite the lack of sunshine and spent lots of time open winged on the Knapweed and Meadow Browns were similarly sluggish and I managed to get close to an Eristalis nemorum and a tiny female Pipizella before I had to retreat home. 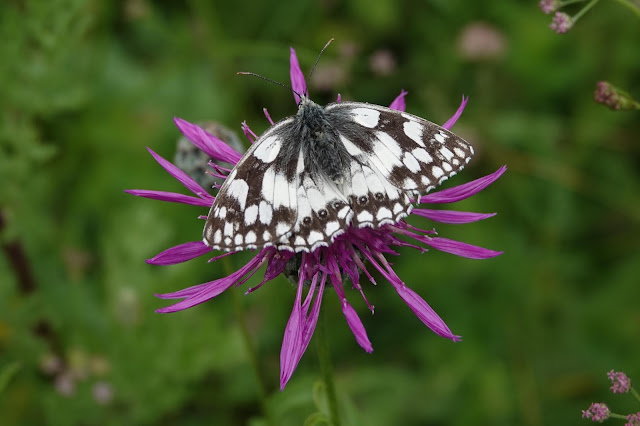 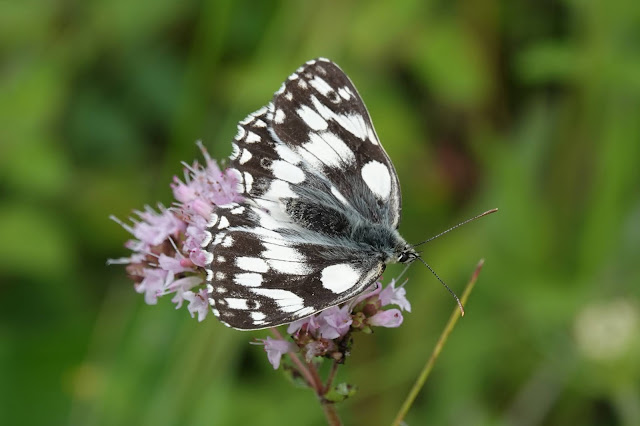