‘Oh no! Not another Ranscombe Loop!’ I hear you cry.  Well, sorry but it is that time of year and with me still lacking an impetus to travel to go birding (despite a wealth of good stuff further north) it is somewhat inevitable that I would end up walking the woodland and farmland trails after I finished my work yesterday.

With my time somewhat more constrained nowadays, I drove up to the official reserve car park and got lucky with a space.  It was overcast but very humid so I thought my chances of some Quality Grubbing quite high. The adjacent bank was a vivid mix of yellows, pinks, lilacs, purples and whites and I set about checking the Field Scabious for the hoped for Andrena hattorfiana.  It did not take long to find a couple and those pink pollen baskets really stand out even in flight. 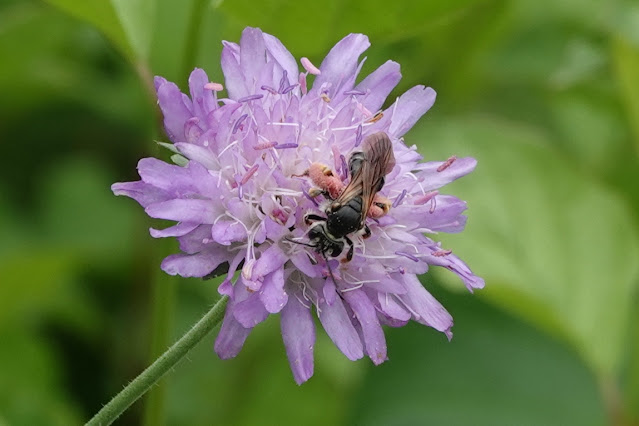 A little higher up the bank several Nemophora mettalica danced and various Bumblebees were attending the Nettle-leaved Bellflowers which were in full flower as hoped. 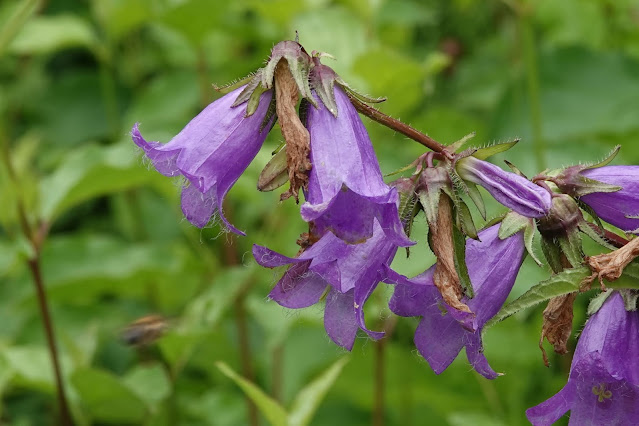 The meadow immediately above the car park below Merrals Shaw was a carpet of Wild Carrot, Basil and Marjoram and was thrumming with bees and more Grasshoppers that I have seen since I were a lad.  Meadows seems to be in the majority along with a few Field.  Roesel’s and Dark Bush Crickets and immature Long-winged Coneheads were seen and Meadow Browns, Gatekeepers and Small White quickly became a feature of the day.


I headed alongside Longhoes were there were great clumps of swaying Perennial Sow Thistles towering over the other Composites and I found many what I believe to be Broad-leaved Cudweed plants going near to the path and a bit of poking around revealed Sanfoin and Toadflax too.

Two Wall Browns were on my hoped for list and put on a very fine show for me and I found another Andrena hattorfiana that allowed a close approach and a Gymnosoma rotundatum perched up.

I always have a good look at the sheltered corner of Longhoes and have found some good inverts before now but I was somewhat taken aback by huge Hornet Robberfly whizzing past my ear and landing on the path near a nice pile of fresh dog poo.  I took a couple of shots but it was quite clearly watching the Greenbottles in attendance at their lunchtime restaurant. I crouched down and had just got the camera focused on her when she leapt at a fly at lightning speed and flew off with it clutched between those hirsute legs.

Amazingly I saw where she landed and was able to find her perched up for he own lunch of dissolving Greenbottle which she was imbibing through her dagger like straw clean through the back of the unfortunate smaller fly. 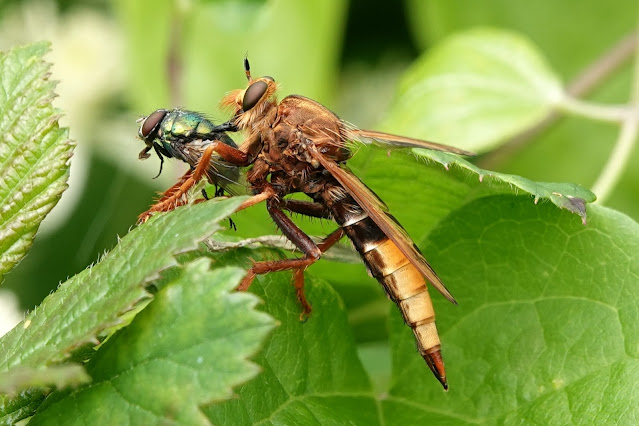 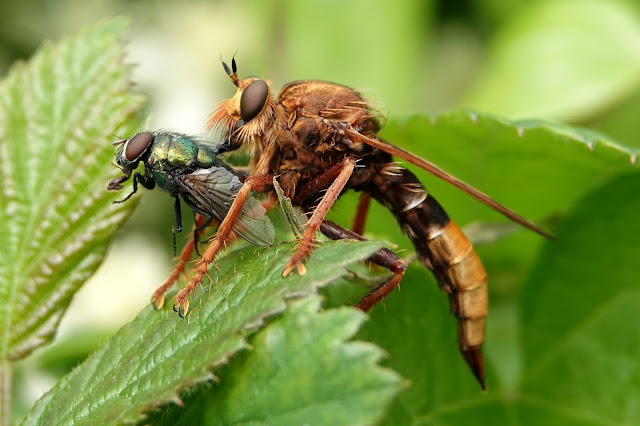 It was completely horrific to watch but at the same time one the best wildlife encounters I have ever had.  I took a few shots and then left her to her repast.  I am not sure if the species has been recorded here before but it was certainly a first for me.

Several pairs of Slender Striped Robberfly were also seen in tandem at this point in the grass, weaving in and out of the stems and almost invisible.


I headed down into The Valley, stopping to check some Upright Hedge Parsley and Hogweed heads.  There were a few Cheilosia and Pipizella hoverflies to be seen along with a small black and yellow Ectemnius  wasps. 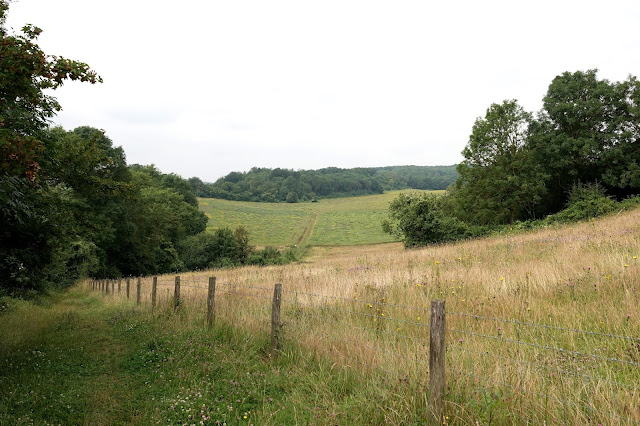 A tatty Four Spotted Chaser perched up – a late record and quite possibly another new Dragon for me for the reserve and the first Migrant Hawkers and Darters began to be seen.  Marbled Whites joined the Browns and Whites and there were several Brimstones too.


I looked for Corncockle but had no joy but the Pale Flax was growing tall and the Perennial Sow Thistles dominated here even more so than Longhoes. Painted Lady joined the Butterfly list.

From here I cut up to the ridge of Mill Wood and the little meadow at the top was different again with patches of Hemp Agrimony, Ploughman’s Spikenard and what I think is Clustered Bellflower amongst the other regulars. 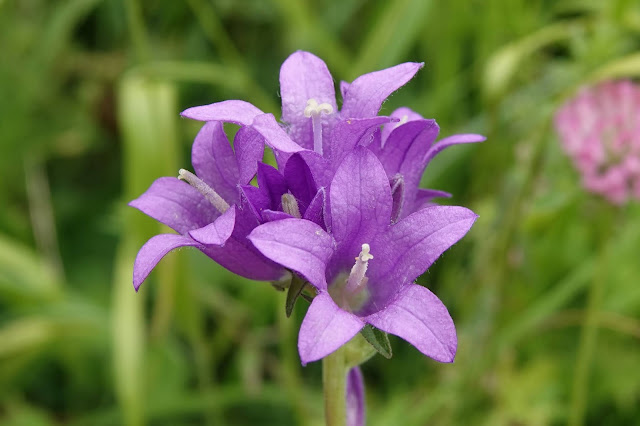 There were still more Butterflies with several Brown Argus and a Common Blue added along with more Marbled Whites and slow flying Six Spot Burnet Moths.  Another Gymnosoma rotundatum was seen and a Kite-tailed Robberfly.  I also found my first Rufous Grasshoppers for the site with the nice clubbed white tipped antennae.


The air was oppressively humid and there was the feel of rain so I pushed on up through the wood past tall ranks of Nettle-leaved Bellflowers and into Brockles Field. Marbled Whites danced around with Meadow Browns but there were no Blues so I continued into the next pasture down the hill. 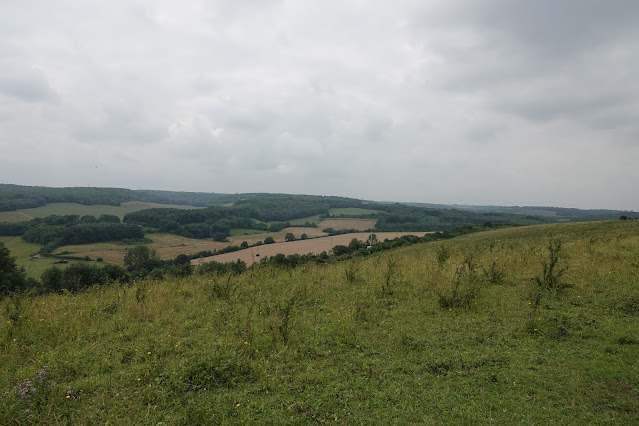 As I emerged from the trees there was the first proper aggregation of summer Hawkers with 17 Migrant and two Southerns patrolling the top corner.  The field itself had more of the same Butterflies but still no Chalkhills and at the other end I found another Hawker cluster.

I went a little further up the track towards Cobham and into the pure grassy meadow with no scrub and found much the same although the Marbled Whites and Burnets were particularly taken by the patches of Small Scabious whose single heads floated around the grass tops from a distance like little lilac clouds.

Silver-Y and Onocera semirubella were put up along with Pyrausta purpuralis and Antony sorted out two more that I found!  More Hawkers zoomed around and a Silver washed Frit glided through and landed for a few seconds just in front.


Somehow I happened to glance down at a spent Snail shell just as a little Osmia spinulosa emerged and flew off! I only found out last week that they uses shells like O bicolor!

My favoured spot to get back into the woods had many Bumblebees on the pink Bramble and several Sicus ferrugineus watching them.  I even saw one attempt to grab a Honeybee.  Terellia tussilaginis were now all over the flowering Burdock and I looked for Tumbling Flower Beetles on the Hogweed but found none of the species I saw last year here, however I may have found another smaller darker species but will have to do some research.

I tried not to brush through too much Bracken on my way back up to the Mausoleum as a Deer Tick is the last thing I want to add to my Ranscombe list.  The Ragwort up here was alive with Hoverflies with all the common Eristalis, Eupoedes, Sphaerophoria and Episyrphus species noted along with quite a few small bees and Cerceris rybyensis which I then found entering burrows on the path. 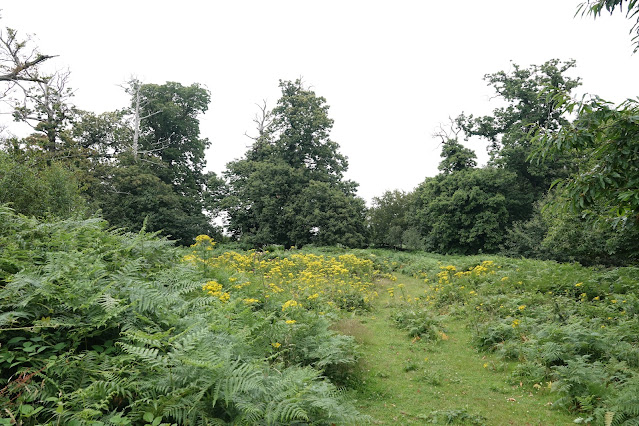 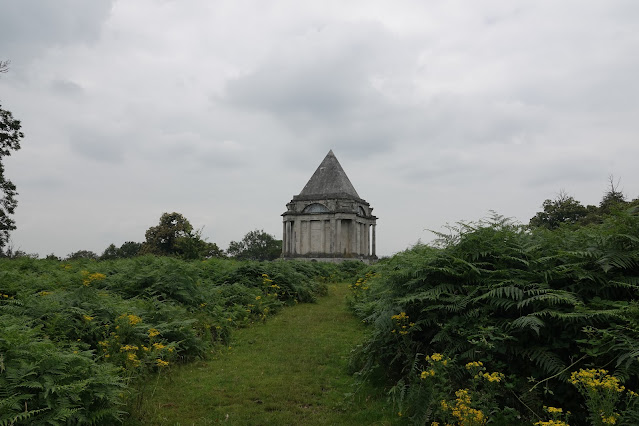 Dark Bush Crickets and still immature Long-winged Coneheads littered the Bramble leaves and Wolf Spiders were similarly lounging around for a change.  Common Dumble Dors were busily shovelling fresh dung but of the Highlands and Dexters there were no sign.


I followed the main path back towards my Purple Emperor Oak and was pleased to quickly see at least four around the canopy with one dropping down slightly to perch up in some momentary sunshine.  A single White Admiral and several Reds were down lower and Southern Hawkers patrolled where there was the Brown last week.

I turned off at Five Ways and went to inspect my bee bank where the Anthophora bimaculata were making a right din!  I actually got some good views this time and was also pleased to see two furry Anthophora furcata too with the little red tail tip.  One was dark and the other quite light.

Leucophora flies lurked around the bee burrows and a very smart almost all red Nomada looks like it may be N striata which would be new if it is one.  Cerceris rybyensis were also on the prowl and I think the prey I saw last week being carried was one of the little Green-eyes.

A fine plump Volucella inanis was on the Marjoram and Volucella pellucens and Xylota segnis were both seen at this point.  Once back out on the field margins I found more roving packs of Hawkers.  Most were Migrants and I counted 41 on this stretch along with a couple of Southern, and singles of Blue-eyed and Brown.  The Whites and Browns were still all over the Creeping Thistle with a few Peacocks, Skippers and Brimstones and there were several Syrphus amongst the many Episyrphus balteatus.


The new bare strip alongside Clay Pond Wood added another new plant to my list although this one was definitely a Consult The Enid moment as I had not got a clue and had not even heard of Round-leaved Fluellen. It was a ground level creeping plant with quite fleshy leaves and I failed completely to notice the bizarre little yellow and burgundy flowers at the time! 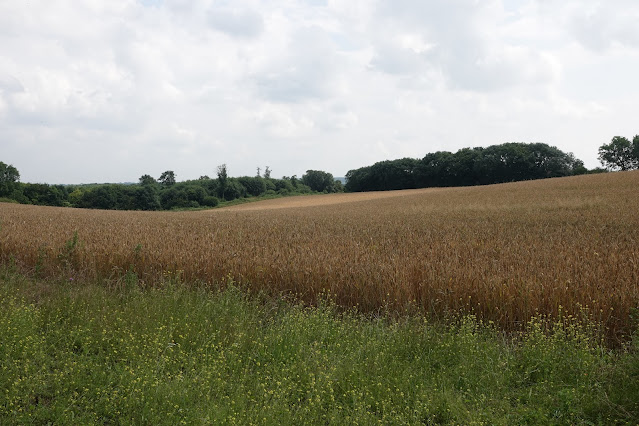 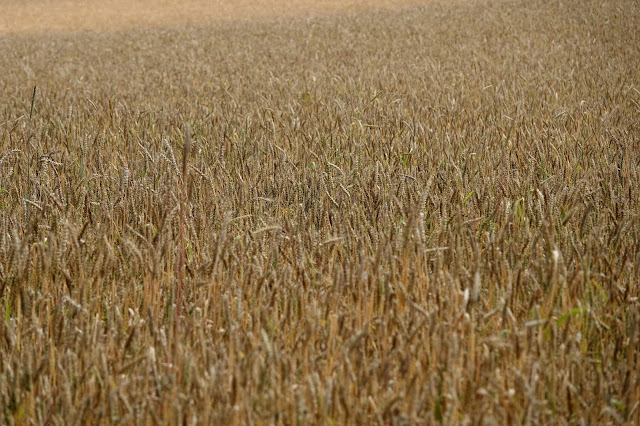 There were a few Commas, Peacocks and another Brown Hawker as I cut through Head Barn Wood and a female Silver Washed Frit almost landed on me as I went through Merrals Shaw and then it was back through the meadow to my stinking hot car. 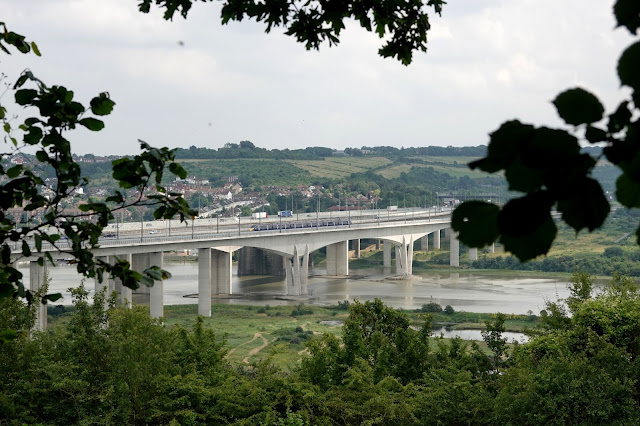