I realised this evening that I had missed out a blog post from work. For one reason or another I never actually made it out for a full circuit during June and only had a snaffled, pollen filled walk along the Southern Trail one morning before opening up.

I actually wrote this at the time but forgot to upload it on here...

I got into work a little early today and took myself out onto the Southern Trail for a short walk before things warmed up too much.  My hayfever was already bad so I stopped to rest my eyes for a while and decided to take the opportunity to open my senses to what I could experience around me.

Being on the borders of a marsh always gives you the best chance of a wide selection of wildlife but could I identify more than just the birds with my ears?  Were my other senses going to get a work-out too?

Warblers made up most of the bird song with shouty Cetti’s in three directions and I could even tell when the Sedge Warbler left his perch and climbed in his display flight before descending to the other side of the path.  Reed Warblers were stationary to my ears while singing but the more I listened the more pings and chirps from Bearded Tits became apparent.

Bearded Tits in the same spot a couple of weeks later


A Little Grebe trilled from the channel and I heard the cluck of a Moorhen and the ‘shew shew’ calls of roving flocks of juvenile Starlings.  Lapwings and Redshank were heard as they commuted to and from the Thames where I could hear the thrum of a tanker working its way upriver.

A group of Gadwall flew over making their curious little dry quacks and the whirring wings and croaks of Pochard whizzed by.  A couple of Swifts sounded like they were chasing each other way above me and I could hear Herring Gulls conversing as they drifted overhead.

Somewhere further down the Marsh Frogs were getting going and I could hear the different tonal hums from Bumble and Solitary Bees attending the Hemlock of Hogweed alongside me.

But did I cheat and have a squint at the plants? Nope… I could smell them.  The warm musky odour of Hemlock is very much a summer scent of Rainham Marshes and swathes of it line the paths and distant Silt Lagoons which means that you smell it whilst driving along the A13 at this time of year.

The Hogweed is similarly distinctive if you are close to it, getting its name as it does, from the strong waft of ripe pig sty that emanates from its blousy heads.  Both these species are equally attractive to Flies as Bees.  I was struggling to pick up the buzz of flies from the buzz of bees!

There were other smells to be collected as I sat and pondered with the, well, rosy fragrance of the many bowed boughs of Dog Rose, the tickle-your-nose peppery oilseed type Brassica and the warm, slightly cloying scents of both Dogwood and Elder.


Your brain is a very clever organ and cleverly shields you from background sounds and it was not until I decided to listen for them that I heard the A13 droning in the background and the quiet thunder of a Eurostar train which I suspect was a shorter commuter Javelin as it went by all too quickly.

Having rebalanced my head and given my puffy eyes a rest I re-opened them to the glare of a stupendously hot Sunday morning and carried on my loop.

Back at the Centre I managed to sneak a few more wildlife moments around the building and car park gardens. There was a nice male Marpissa muscosa lurking on a handrail and both  male and female Salticus scenicus – the familiar Zebra Jumping spider were actually on reception. 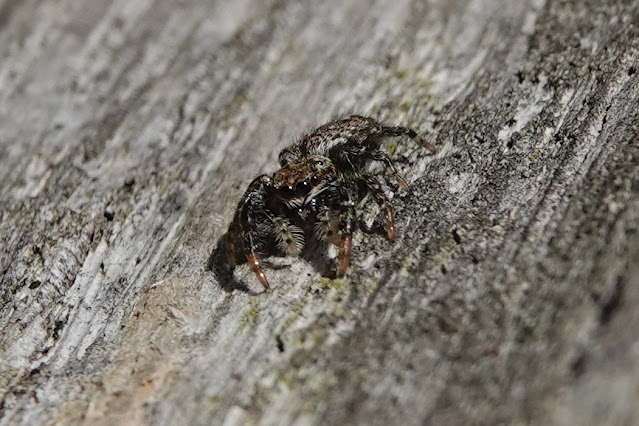 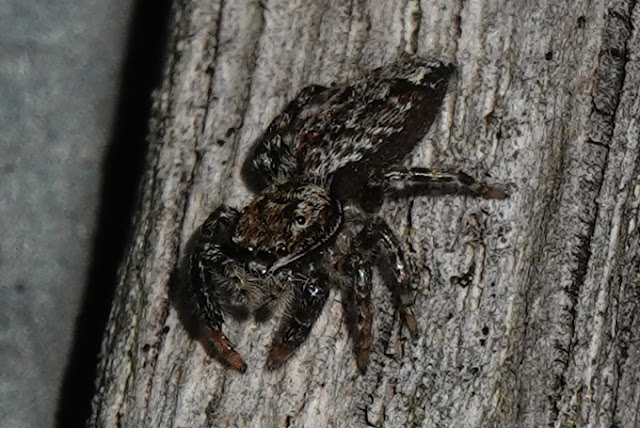 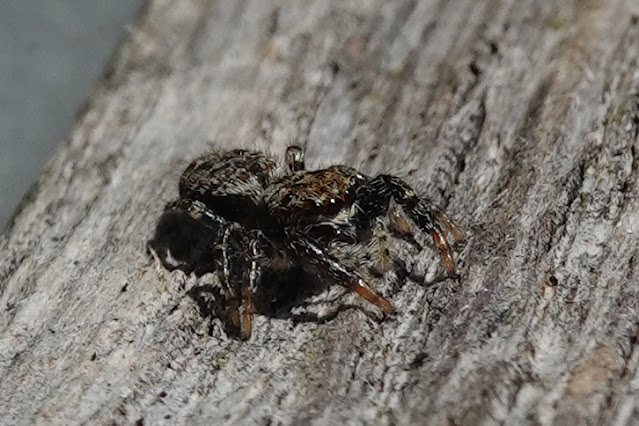 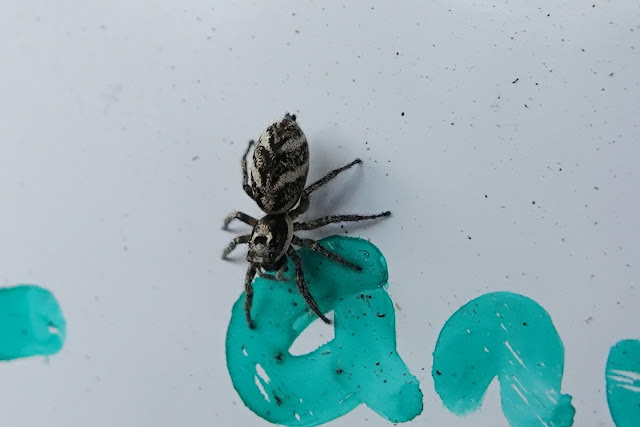 A Bee Beetle had been seen the day before and so I went and checked the Oxeye Daisies and sure enough found one with its face shoved deep inside!  A big Queen Bombus sylvestris was also present and a Large White posed nicely.  There were Pyrasutra aurata on the Mints and a small white Misumena vatia waiting for lunch on the Hawkweeds which it was sharing with Oedemera nobilis. 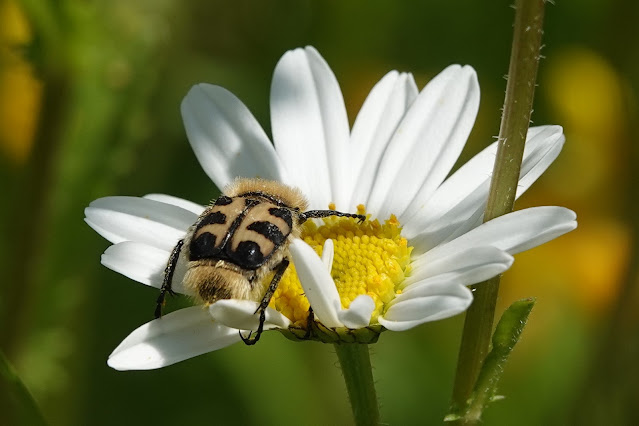 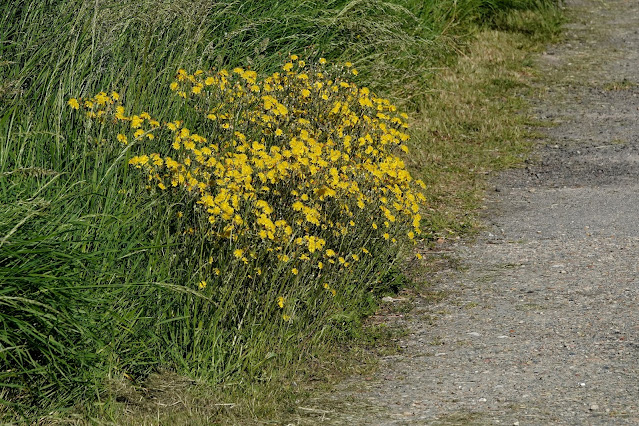 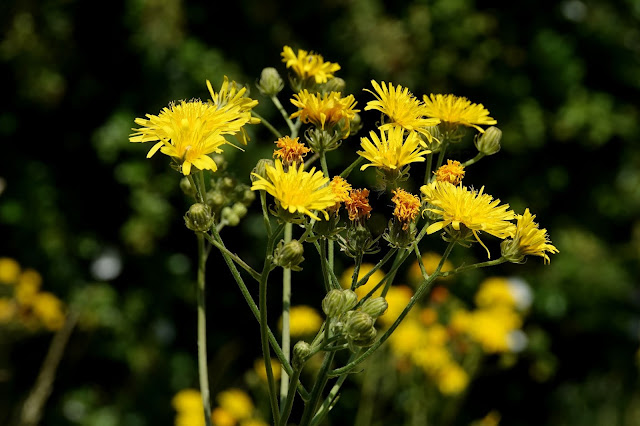 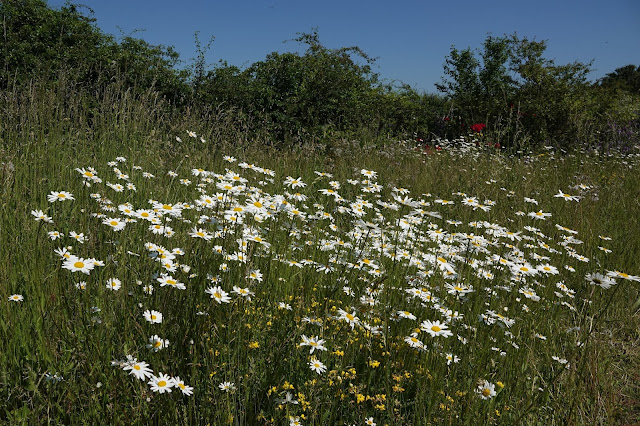 A small bee was identified by Tony M and Jerry H as an Orange vented Mason Bee, a new one on me and a Bombus sylvestris amazed me with its ability to even fly.  I found an obliging Eristalis arbustorum on some Hogweed and a quick check of the White Bryony revealed both Bee and Ladybird specialists still present.


The Rumsbys were in and a sweeping session added the first Hybomitra ciurea Horsefly of the year with her funky eyes and a new species of Long-horn Beetle for me with Leptura quadrifasciata along with one of the Silpha predatory beetles.


And as an add on and simply because the images do not have another home: On the 17th and just before heading down to the south west I managed an after work nip down to a roadside spot between the M2 and M20 not far from home to have a look for some spikes of magnificent Lizard Orchid. I had not seen this alien looking species for the best part of thirty years on one of our Orchid days back when birders were just discovering that there was more to life than birds!

I crouched down and admired these two Kentish outliers, way off from their normal coastal homes, with cars whizzling by and the rain threatening before hastily retreating back home with a broad smile. 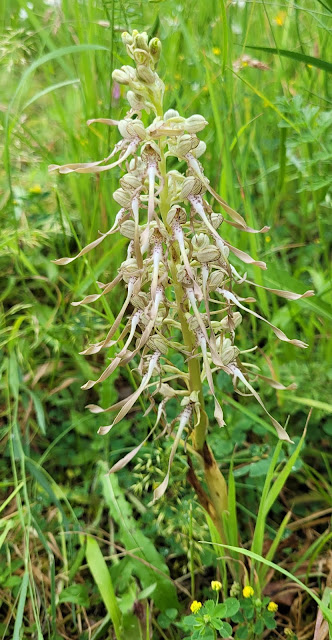 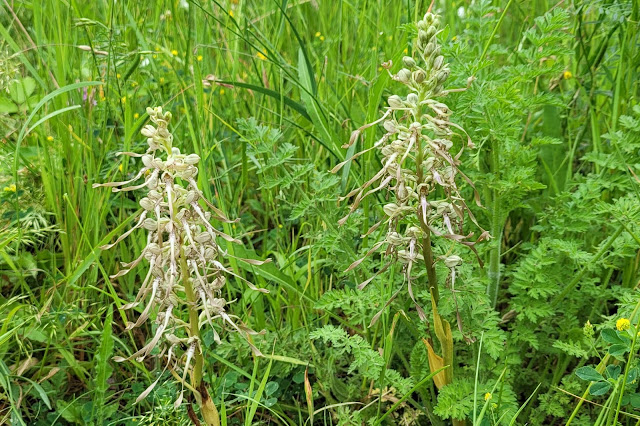