Cuckmere Haven in West Sussex was the first stop of the day for Pete G and I and fortunately the male Red-throated Pipit was still feeding down in the floodplain alongside the river.  It was quite confiding and even sang from the ground a few times.  It was freezing and I remember no one had enough layers on. 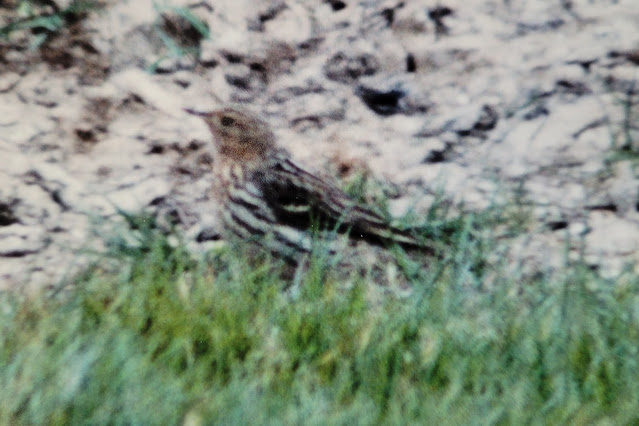 Hundreds of Swifts were on the move and several Grey Herons stalked the river edge.  Unlike nowadays, there were no Little Egrets!

We moved onto Dungeness and the RSPB reserve held a single Med Gull, two Little Gulls and two red Knot, Curlew Sandpiper, Ruff and Wood Sandpiper.  From here we headed to the Patch and in 45 minutes we saw 16 Black Terns, several Sandwich and Arctics amongst the Commons and singles of both Roseate and Little. Two dark phase Arctic Skuas patrolled offshore and harassed the terns and Kittiwakes and a single Yellow-legged Gull was on the beach.

Scoter were on the move with 800 counted Gannets, Fulmars and a Razorbill also noted.  There were even more Swifts around the Trapping Area and with a bit of effort we eventually got views of my first Kentish Golden Oriole, a male that flashed across the main path.  It was otherwise quiet although two Spotted Flycatchers were seen.

We ended the day at St Margarets where three or four male Marsh Warblers were seen briefly but heard well as they sang from the Rosebay Willowherb.  It was so clear that you could make out yellow fields of Oilseed and farm building across the Channel in France.

There was no sign of yesterday’s Bridled Tern at West Thurrock power station outfall. If only I had known the evening before.  There were 40 Common Terns and my first two spring Black Terns for Essex while 45 Grey Herons were in the outfall creek. It would be 23 years until I eventually saw Bridled Tern in the UK.

The Little Ringed Plovers and Redshanks were still at Dagenham Chase and a visit to Hainault Forest gave me and Paul H several Hawfinch sightings.

James H rang to tell me that a 2nd year male Red-footed Falcon had been found at Rainham Marshes (not RSPB in front of it back then).  It was in almost the same spot as the female in 1990 and showed very well and had a good fly round too.  I seem to remember that we trespassed onto the landfill to get enough height to watch it out over the silt lagoon.

A day in Norfolk saw Peter G and I at Cley Coastguards in the hope of seeing a Tawny Pipit.  It had been lost to view but was back in just a few minutes and was watched scurrying around the short grass by the car park.  Back then Tawny Pipit was still an almost expected year bird.

The reserve was quiet bar a single Little Gull and so we headed west to Wolferton and although we saw no Honey Buzzards we did hear a Nightjar, Tree pipits, Yellowhammers, Crossbills, Siskins and Firecrests.  Nearby Wooton only produced Marsh Harriers so it obviously was not a raptor day.

We ended up down at Fordham and sat on the bridge waiting for a Golden Oriole to cross over which a male eventually did. The highlight was undoubtedly the duo of preoccupied Weasels that noisily chased each other back and forth over the bridge and in and out of our feet for five minutes before realising that they had an audience and scampering off.

As Paul H had not seen the Red-footed Falcon I took him down to Rainham for a look and we enjoyed good flight views as it hawked and hovered and interacted with the Kestrels. Other than that there were just lots of Gulls, Crows, rain, pollen and mossies.

Dad and I joined Roger Hawkins and bad of intrepid BTCV volunteers for two days helping out at Hickling Broad in Norfolk. The first day was spent clearing a foul smelling pond whilst being constantly drizzled on and consumed by mega mossiest and midges. Birdlife was fairly restricted with a pair of Marsh Tits the highlight.

A good meal was had in the dorm – I think it was a church hall but there was little chance of sleep what with Roger’s monumental snoring. He ended up being banished to the kitchen in the end if memory serves.  Day two saw us moving logs and removing encroaching Birch scrub. A pair of Marsh Harriers were seen and a Savi’s Warbler reeled while it was my much hoped for first Swallowtail butterflies that stole the show.

Peter G and I headed down to Kent and Sussex for the weekend. Our first stop was Copt Point in Folkestone where we saw a single Med Gull before having lunch at The Patch at Dungeness where a couple more Meds were logged.  The RSPB reserve was pretty good with a single Black Tern amongst the Commons and a pair of pink flushed Roseates were on one of the islands.  The looked so elegant in flight.

From here we drove to Rye Harbour and were greeted by yet another two Med Gulls. They were still a novelty back then.  The Lesser Crested tern from the previous evening had snuck out early in the fog but we were very happy with superb views of the Little Terns and a couple of encounters with Squeaker the Least Tern as he ‘peeped’ in and zoomed out.  The plan was to get back here and in position for crack of dawn the next day as there was a better chance of some more prolonged views.  The beach flora was magnificent and thousands of Swifts spiralled up and through the cloud to roost. 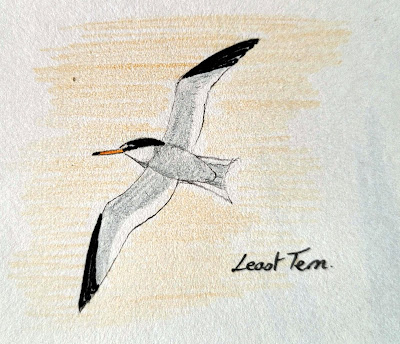 Whale-sized fish n chips was consumed at The pilot before settling onto the Obs for the night.

I got no sleep due to Pete’s horrendous snoring (still not a par with Rog though!) and we were up at 3am and heading back to Rye swerving around the hoards of bunnies prancing foolishly in the road.

We met the Warden by 4.40am and by 5am Squeaker came in piping like a squeaky Oystercatcher and over the next hour superb views were obtained as he brought in fish offerings for his Little Tern mate and we were able to glean all the salient features.  It appears now that he may have already been visiting the site for seven or eight years. 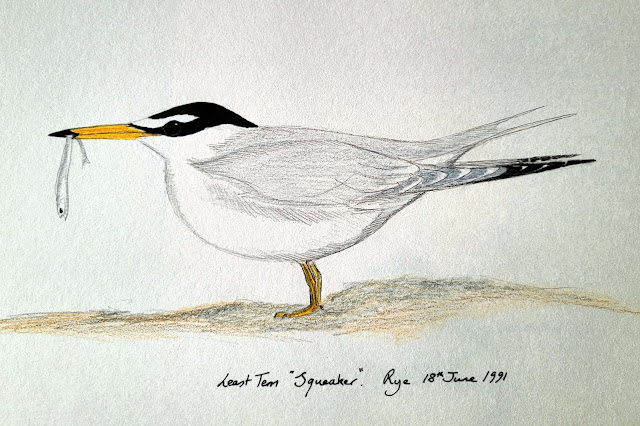 Rather bizarrely the Warden who had been up all night helping the local Hedgehog population to desist in nest predation would turn out to be Dominic Funnell our first proper Warden at Rainham ten years later. Funny old world.

The Swifts descended from their nightly travels and a lone Barnacle Goose flew over. We got back to Dunge for 7am and had some breakfast. Pete dozed and I seawatched until 8.30am clocking up a similar spread of species to the previous day but with only 41 Scoter this time. The moth trap had been emptied and I remember seeing White Spot, Yellow Belle, Tawny Shears, Fox Moth, Pebbled Prominent and a Cream Spot Tiger.

Out again early and this time up to Lackford when an Osprey greeted us upon arrival perched in the sun after a good breakfast feed.  She had a bulging crop. A Hobby swept through a flock of hirundines and Swifts but the Red Kite in the area was a no show.

On to Santon Downham where the male Red-backed Shrike was back for his final season although he never attracted a mate.  He was singing mechanically from the top of a Hawthorn.  Our circular walk was actually very productive with two male Golden Orioles whislting from either side of the river – so one in each county, all three Woodpeckers, lots of Warblers and a singing Woodlark. Low flying Tornados ripped the air overhead and we could see Chub and Pike in the river and some Stone Loach too.

The Osprey showed well in flight later in the day back at Lackford and an immature male Red-footed Falcon was seen poorly after a chase around West Stow.

My notes talk about not going for all the east coast and Newcastle goodies on the 22nd but I have no idea what they were but anyhow, Pete and I ended up down on Thursley Common in the rain, drizzle and sandy mud. Consequently bird life was sparse with dozens of Tree Pipits (wow!), 25 Crossbill, Skylarks, Stonechats, Reed Buntings and Yellowhammers. Curlew and Snipe were out on the bog and several Redstarts were singing despite the weather.  The Sundews were enjoying the weather even if we were not!  After this we came home!

Ken Barrett phoned the evening before to let me know about a Woodchat Shrike at Gunners Park and after some judicious planning I took Mum out for a spin in my car.  Fortunately the weather held and the bird was soon in view on its favourite Elder.  This female was busy catching bees and bashing their stings out.  This was my second Essex record following one that our YOC group found on the 12th May 1984 in Epping Forest somewhere near Waterworks Roundabout while on a long group walk.  I know we were only young kids at the time but I can still picture it sitting there on a little bush with us wondering what on earth it was and not finding it in our books.  Sometimes you can look back on early birding and ruefully unpick what you saw but this and one other memorable local find from later that same year still reside within my records and on my list...

The Gunners Woodchat chased a Swallow half heartedly and we left it to its hunting and headed for home with the storm clouds brewing. 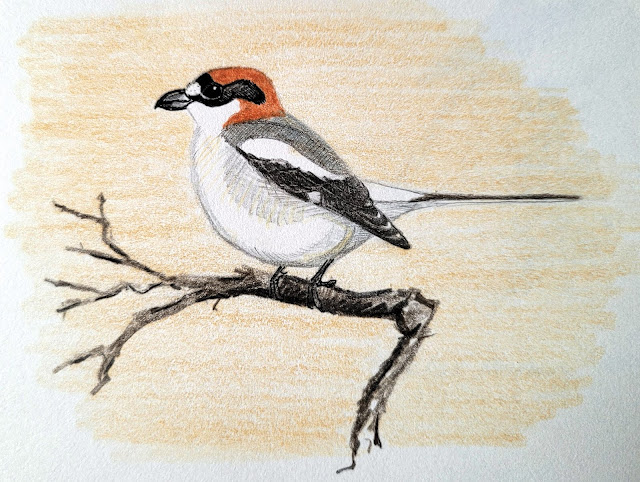