I have been politely badgered for some time about actually visiting the beleaguered and under threat Swanscombe Marsh.  It is not far that from home but I have always resisted on the grounds that I spend so much of my time working and birding in what I thought were similar industrial Thameside habitat on the Essex side.

However, with the prospect of a return to actual work feeling fairly imminent I decided to head that way this morning despite the poor visibility and chill air.  I parked up in Lower Road and struck out into the bit that I believe is called Botany Marsh.  Cetti’s Warblers were singing all around and Greenfinches and Redwings called from the scrub.

I got to a large flash and was confronted but a vast congregation of duck but they were not Teal or Wigeon but Mallard – hundreds of them.  I have quite possibly never seen such a flock of this highly ignored and declining species.  Most were around the edges and this made counting quite straightforward and I quickly got up past the 700 mark.  The split between the sexes were ridiculously uneven and I reckon ran at over 90% male.  It was a good job that they were not in typical highly sexed up Mallard mode otherwise those few females could have been in for a rough morning given the proclivities of the drakes.  There were so many that you could hear them squibbling around the margins and I really should have recorded it as it was a soothing constant background noise. 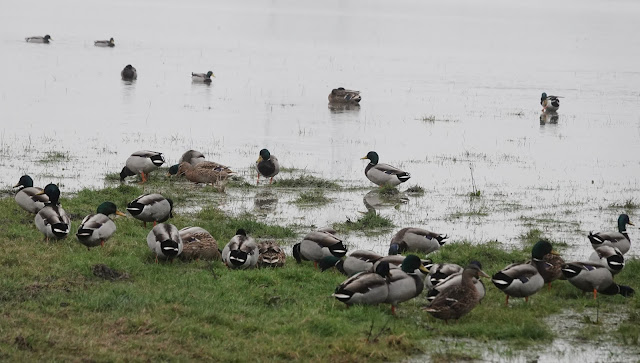 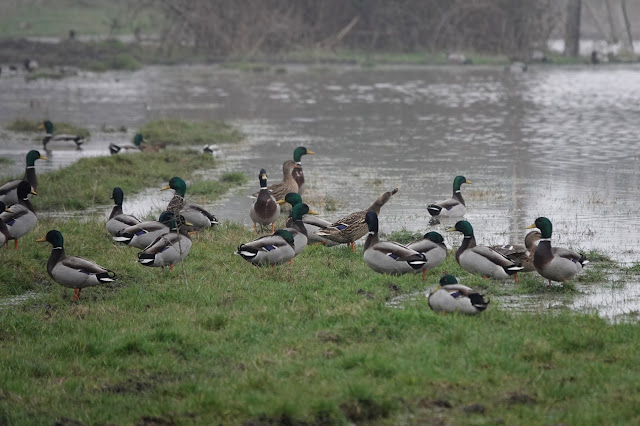 Strangely enough there were no Wigeon whatsoever but a goodly number of plipping Teal and a few Shoveler and Gadwall.  A single Egyptian Goose was amongst the duck and Pied Wagtails tottered around but there were no early Whites with them. A solitary Little Egret foot waggled near the bank. 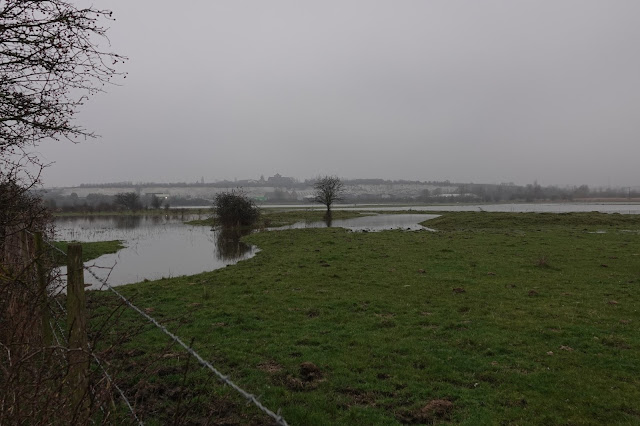 The path was incredibly flooded and I only just got through with my wellies on and even here there were more Mallards to be found while a Chiffchaff sang from a Cherry Plum in blossom and 12 Reed Buntings came up from the Phragmites as I sloshed along. 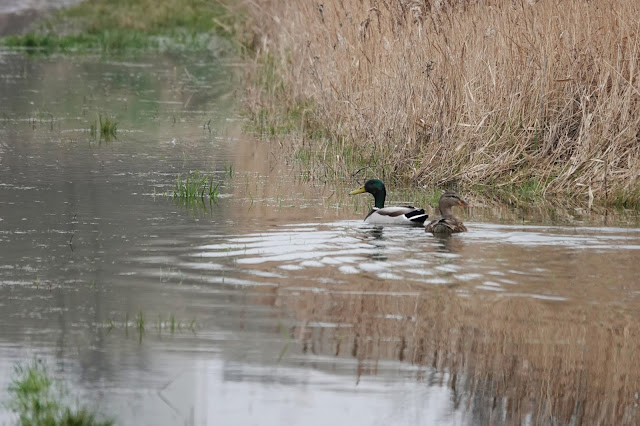 Following the map Barry had sent me I made my way down to the beach and was surprised to find that it was actually of golden sand and not mud and rubble and is undoubtedly a bi-product of the ARC sand and gravel plant behind it! 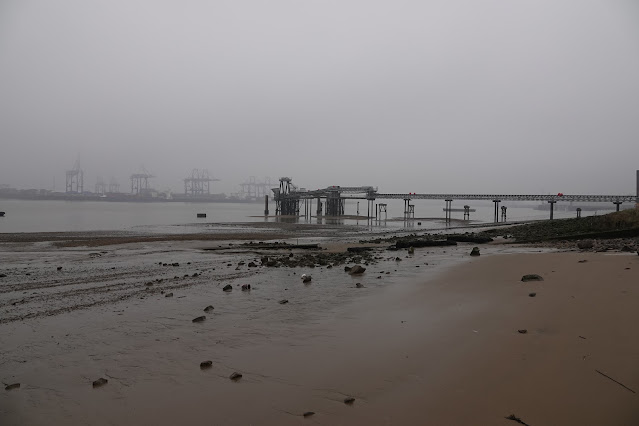 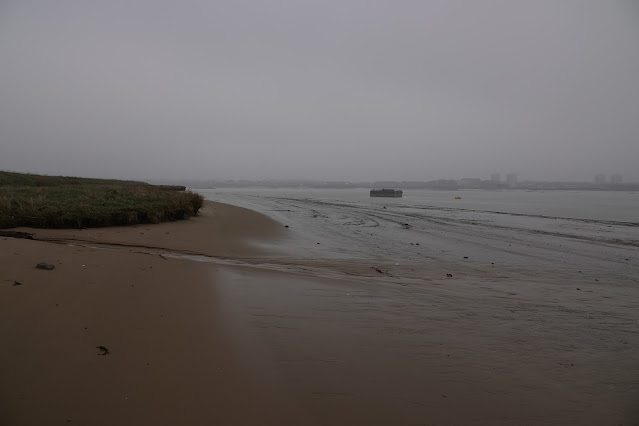 The visibility was grim and it took an age to even see the top of the mega pylon while down on the grey river there were just a few gulls and Redshank to be found.

I followed the Thames west hoping for Jack Snipe but getting no joy but did add three Curlew and a single Common Snipe and Dunlin to the list. Dunnocks, Reed Buntings and Meadow Pipits emerged in front of me 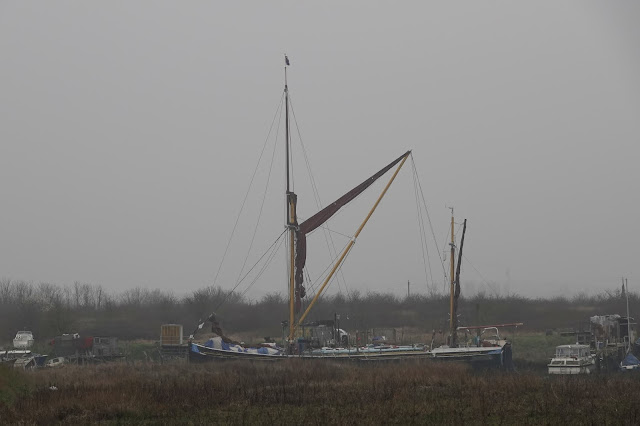 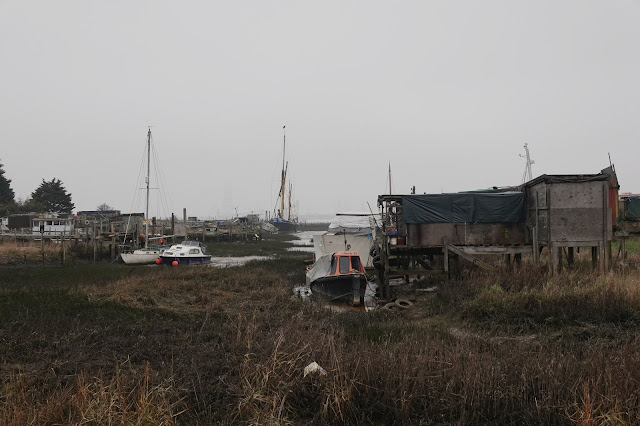 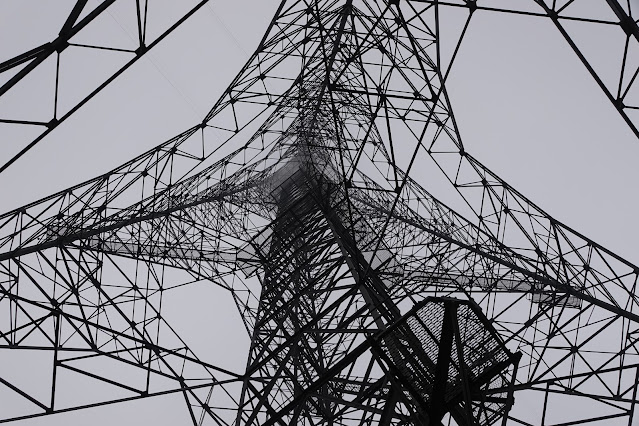 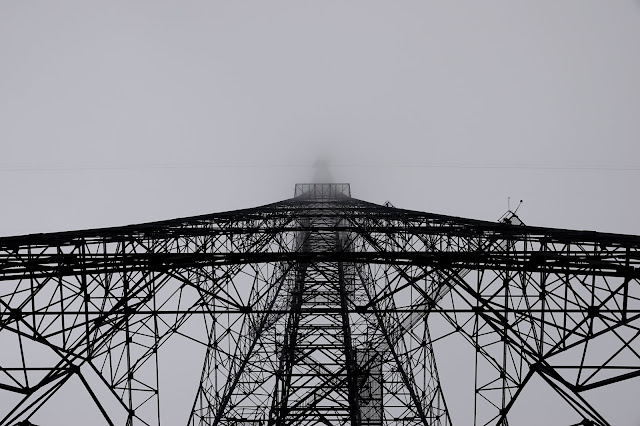 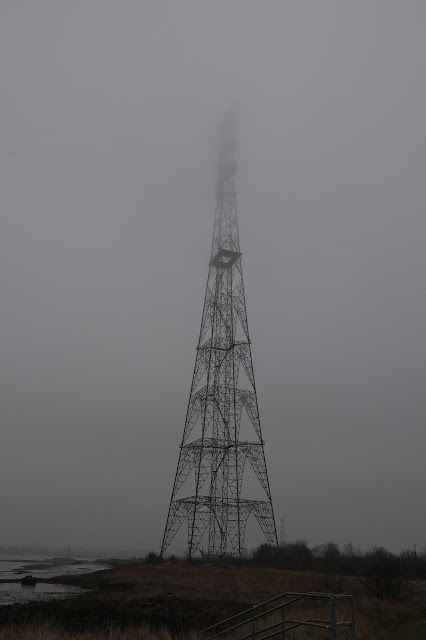 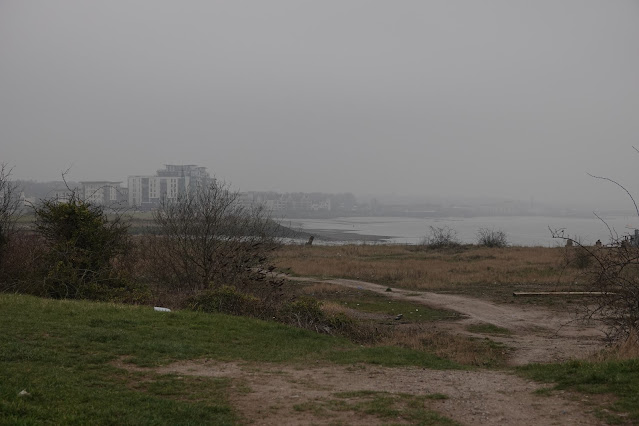 Cutting through an old boat yard (complete with Thames barge) saw me appear opposite a stunning reedbed with a lagoon to one side.  I have driven past this spot thousands of times over the last 20 years and never knew that it was as extensive as this and I have to admit to being quite taken aback by the scale of maturity of it.  It looked more like a little bit of Ham Wall had been dropped, dead trees and all, onto a patch of riverside in North Kent. 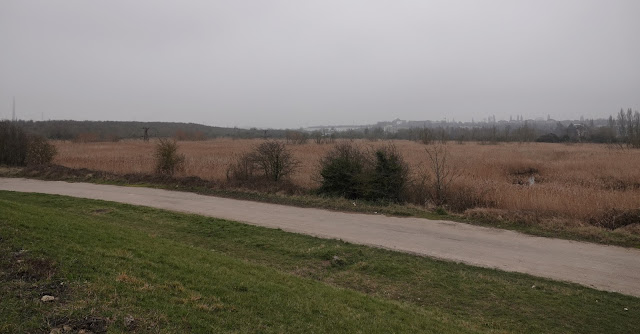 Grey Herons in full breeding colours were taking twigs into their nests at the base of scraggy trees in the reeds (which I presume are too fragile and dead for big stick nests) and a pair of Marsh Harriers quartered back and forth with the male whining like a pitiful cat.  He is quite possibly an old bird being almost metallic grey in the appropriate places.

Bearded Tits pinged at four spots on this part of the walk and I saw a fine grey headed male while I reckon I heard at least 12 Water Rails as I ambled towards Northfleet. Little Grebes trilled and Pochard and Tufted Ducks could be seen on the lagoon.

I doubled back at this point and attempted to find the public footpath but it was completely under water and I had no idea how deep it was so I pushed on into the scrubby fly ash area, I am not entirely sure whether I was on official path or was technically trespassing as there were several conflicting signs but no one appeared and said ‘get orrf ma laand’ so I just followed my nose.

I added Bullfinches and a singing Goldcrest and discovered a superb patch of Greater Reedmace just crying out for a Penduline Tit or three! 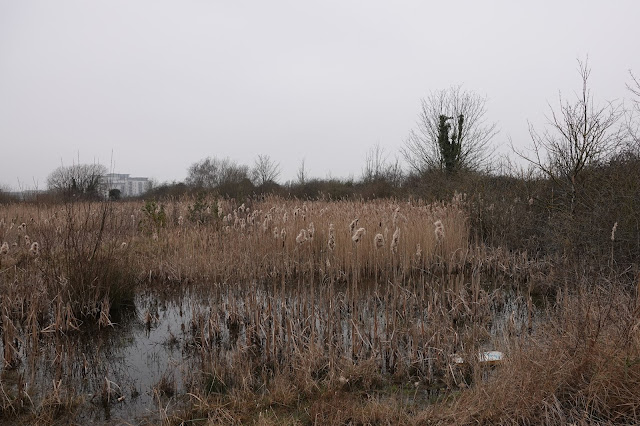 More by luck than judgement I found myself back on the other side of the Mallard infested flooded meadow and at the spot on my map which said ‘Dartford Warbler has been here!’ and amazingly within just a few minutes I heard him singing across the other side of a wide ditch in some brambles up the adjacent slope. He even did the decent thing and came right up on top to show off and at one stage had Cetti’s Warbler and Long-tailed Tit in the same bush.  Two female Stonechats briefly appeared with him but I did not see a male. 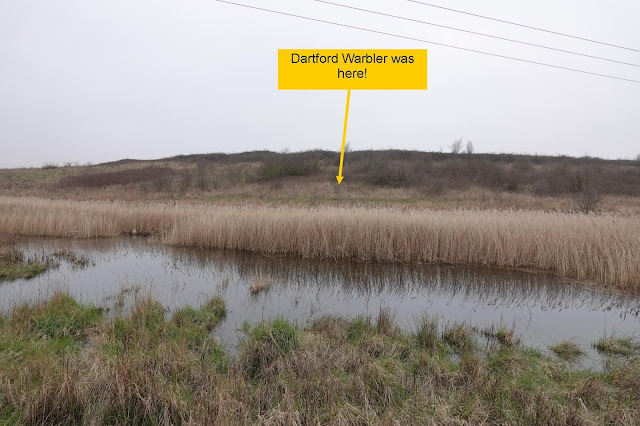 With my bearings now set I looped back around to Lower Road stopping to check out some orchid rosettes and then to watch some of the Mallards and a Little Egret paddling down the path that I waded through on the way out.

It was only slightly less grey than when I came out and a cup of coffee was required before heading for home after a successful exploration of a site with a concentration of relatively new habitats and an associated ecology to match.  I understand that the proposed theme park development will not remove all traces of the site as it is but for such a myriad of micro pockets of habitat to have become established in such a short time rammed between industry, railways, roads and houses is miraculous and the disturbance will probably be catastrophic.  This natural regeneration of a previously impoverished piece of old industrial land proves that even the most seemingly degraded and 'unworthy' landscape is worthy of attention and protection.

We have to fight to retain the fragments of riverside habitat on both sides of the Thames in an age when land is money and development is usually houses, so to try and jam and huge theme park into what is now a stunning example of nature winning through seems unnecessary and unjustified especially given the apparent desire of the British public in the last year to seemingly, at the very least, walk around their local piece of remaining greenspace.