It has been a slow start to the year with little time spent at anything other than work at RSPB Rainham Marshes but at least we are back in the Centre again and I can see out of the windows and across the marsh and Thames rather than just the car park.  My time actually out on the reserve is very limited nowadays but I do my best from in and around the building and I suspect that I am only missing a couple of bits and bobs that have been seen by others since New Year – Jack Snipe and Bearded Tit springing to mind.

With generally mild westerly conditions very little has changed over the last few months but the reserve is now nice and wet and the duck are certainly loving it.  The five Barnacle Geese from mid-December are still around but I had to wait over a week before they had a fly round from out on Wennington and I managed to pick them up in the scope. The winter duck look superb on the brighter days and one day all my scanning will surely produce a Green Winged Teal or drake American Wigeon? Pintail are my favourite though and always look so elegant an and refined.

Three single Great White Egrets dropped in on the 1st with one again the next day and I suspect that I have surpassed the 50 mark for the reserve now after the first one way back in 2003 while an immature Spoonbill that spent pre-Christmas on the still threatened Swanscombe Marsh has now been with us for the last ten days or so.  The Cattle Egrets left in early December – a week before the cows but two are now just off site with the horses near Fanns Farm in the bottom of the Mardyke Valley so hopefully they will make it back to the marsh come the spring.

I have bumped into our very vocal pair of Firecrests in the Wildlife Garden a couple of times and even managed to get lucky and see the male Dartford Warbler on my only attempt this year where he is keeping company with his Stonechat buddies.  Fieldfares and Redwings have been along the river wall and Chiffchaffs and Blackcaps have been seen from the windows too.


The Ravens have been a daily presence with up to four around although they all head back to Swanscombe at the end of the day and are seemingly not linked in with the birds seen in the neighbouring farmland to the north of the A13. There are no Owls of any sort on the reserve this winter which is odd but the Marsh Harriers have been magnificent with now seven birds at least on site and some fantastic close quarter hunting observed daily.  Two gleaming adult males and a rapidly maturing immature male are regularly to be seen.  Peregrines have been seen tearing into the Lapwings or high tide Dunlin and Black-tailed Godwit flocks and the pair of Sparrowhawks have been terrorising the bird feeders several times a day. The male is an absolute peach of a bird and often passes within inches of the public on the exit ramp as that is part of his attack route while Kirsty the ridiculously tames Kestrel is still entertaining and spends most nights roosting on the little plinth we made for her on the balcony.

January is not renowned for its wealth of insect life but I still managed to find a few bits at work with the subtle little Agonopterix alstromeriana on the 1st and then on the 10th a delightful, tiny bejewelled Esperia sulphurella was fluttering against the window.  This cute little day flying moth is not normally on the wing until March at the earliest, so it was quite a find.

A routine check on one of the old MoD bunkers by the side of the Mardyke near our car park added the richly coloured Herald – a larger, oddly shaped moth.  This species habitually hibernates and I counted 14 lined up along the ceiling along with five Peacock butterflies and countless Mosquitos that all woke up as soon as I exhaled! 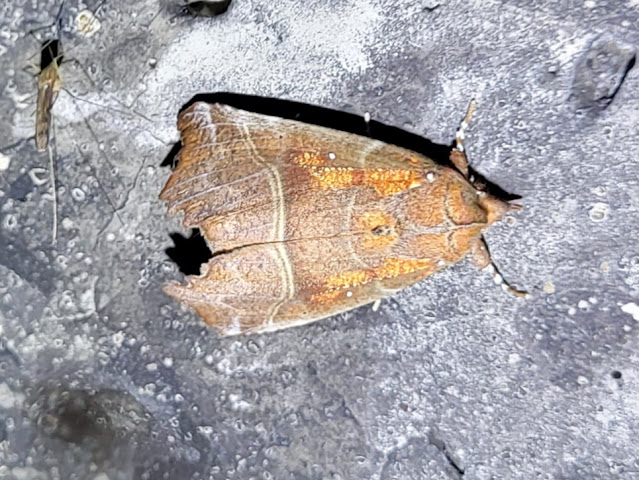 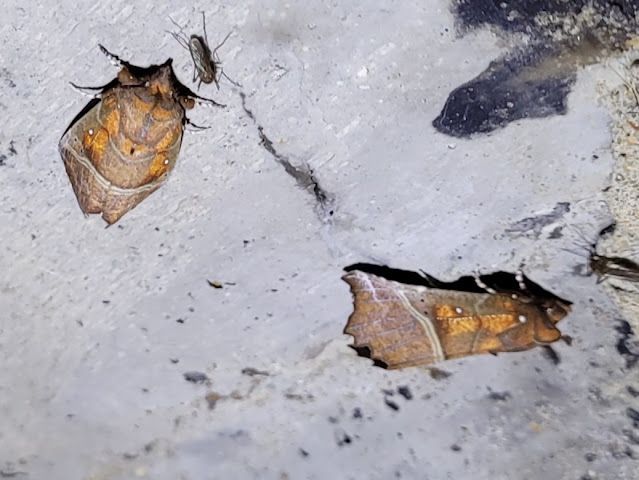 There have even been  one or two larger flies around but one on the outside window caught my eye the other day and even through the glass I could see that it had been killed by a very specific fungus.

The parasitic fungus is called Entomophthora muscae (I think) goes to great lengths to exploit the mating urges of house flies.  After taking control of a fly's brain it sends its host to die on the highest point it can reach (our main Centre window), the zombifying mould concocts a powerful aphrodisiac to complete its ruse which then attracts more flies to mate with it which are then also infected while the original fly releases the fungal spores into the wind (the white bands between the segments of the body)… gruesome but amazing.

The Rainham sunsets have, as ever this time of year, been magnificent on occasion.

My days off have always coincided with the wettest, windiest days and I have stolen the odd hour in my Strood garden to do some light tidying up in preparation for the spring so that my woodland ground flora does not get smothered by a foot of leaves but they are all good for the compost so they do not go to waste.

I have actually encountered little wildlife while pottering but a look inside the Teasel heads for a moth larvae whose name I can’t remember (sorry Antony but still not found one) did reveal both Ten and Twenty-two Spot Ladybirds tucked up inside along with a tiny green spider that I think is Diaea dorsata.


I looked to see if my Man and Bee Orchid rosettes had appeared in the lawn but as yet nothing but up the top end under my mature Elder I found the tiniest little nubbin of darkly spotted leaves that can only be from an Early Purple Orchid. It certainly never showed last year and I am intrigued to see what else comes up over the coming weeks.

On the 15th I actually escaped for the day and we headed up to visit the Wrens in Lowestoft but the fog going up was terrible and it only really cleared when we arrived. A generally lazy day was had and Antony and I headed out for a couple of hours walking while the ladies talked crochet and such like.  We took in a circuit from his front door that took us down through Blackheath Woods and Pakefield Park where a few expected mines of both fly and moths were seen with before wending our way down to Pakefield Church with clumps of Pellitory-of-the-wall, well, on the walls and some interesting stony inclusions within the largely Flint church facing that had a host of tiny Crinoid fossils with in them.


From here we dropped down onto the beach which was covered in Tree Mallows, Lupin bushes and a zillion dog walkers and where a coffee and toasties beckoned. 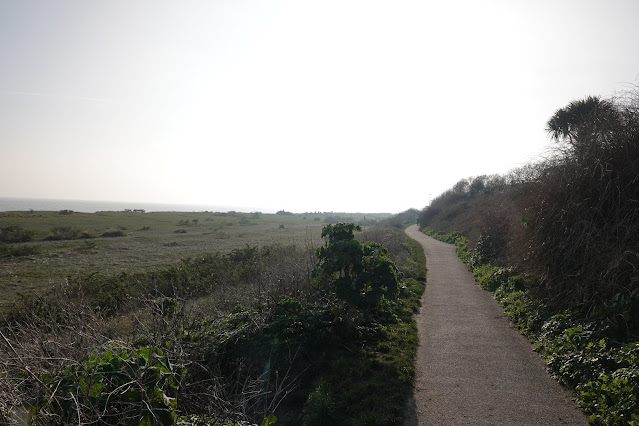 The return look took us through Kirkly cemetery where Antony pointed out some of those funny little moth cases and cocoons that I found in my Frindsbury graveyard before getting back in time for another coffee and some quality paper plane making experiments with the kids. 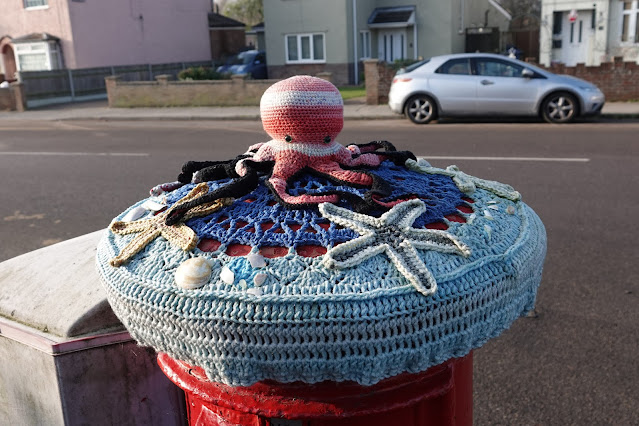 Another week at work has whizzed by but I did at last manage to face up and reduce the height of the small bendy hedge outside the Centre which will encourage it to put on more new growth this year and thicken up further.  I was kept company by Robins, Sparrows, Wren, Cetti’s Warbler and even a couple of the more inquisitive and bold Brown Rats.  Hopefully the brash will all be cleared away by the workparty today…

And so just to break the mould of recent weeks, I actually woke up to a day off with clear blue skies and a thick frost and so by 8.30 was up at the end of my road for a walk around just a small section of the Ranscombe Loop.  I had anticipated mud and worn my wellies and it was a good move and the Blackthorn walking stick that my Dad had made me was an essential piece of my of my kit today.

As expected the woods were fairly quiet although I did encounter a few new birds for the first time this year with Coal and Marsh Tits, Nuthatches and Treecreepers and a few Siskins.  There were Meadow Pipits, Chaffinches, Linnets and a couple of Skylarks in the field opposite Sam’s Clary bench and Green and Great Spotted Woodpeckers were seen.

The frost lingered long enough to allow for some arty leaf images and unlike at home I found several Bee orchid rosettes already poking through. 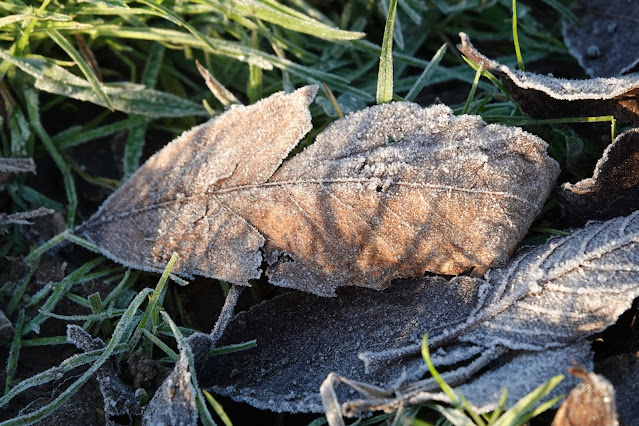 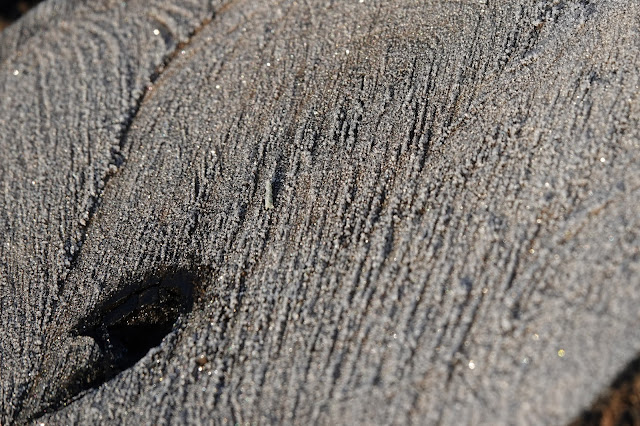 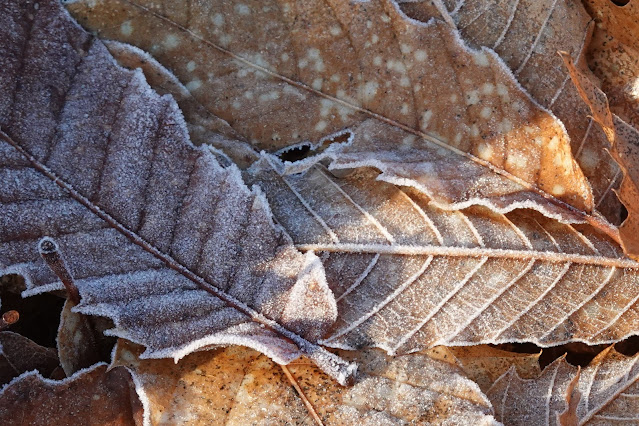 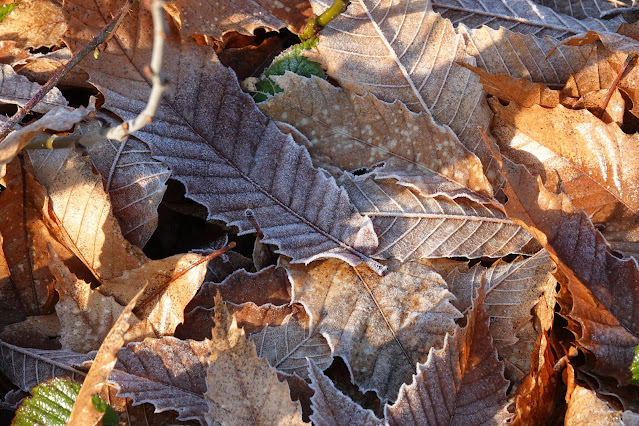 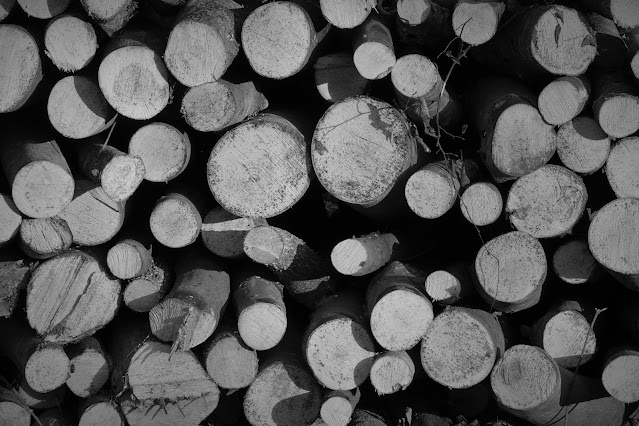 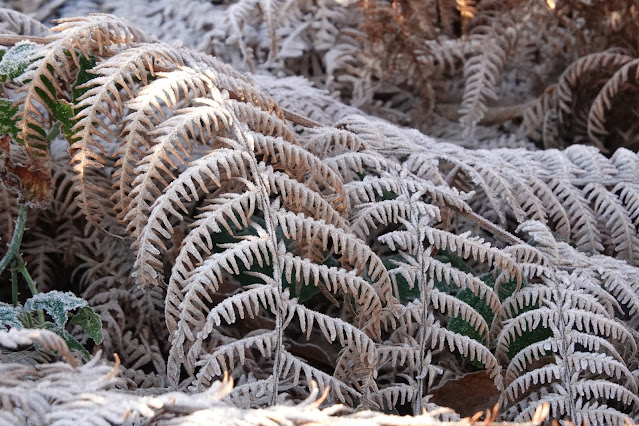 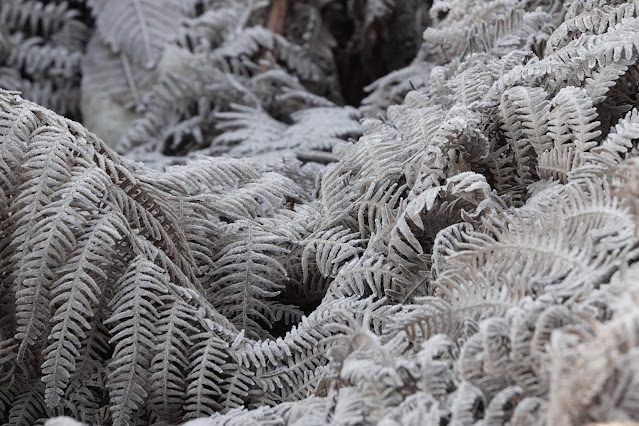 Three Fallow Hinds slowly walked into the stands of Sweet Chestnut and the White Hart was amongst them. They stopped to look at me and then melted into the seemingly impenetrable ghostly silver trunks. 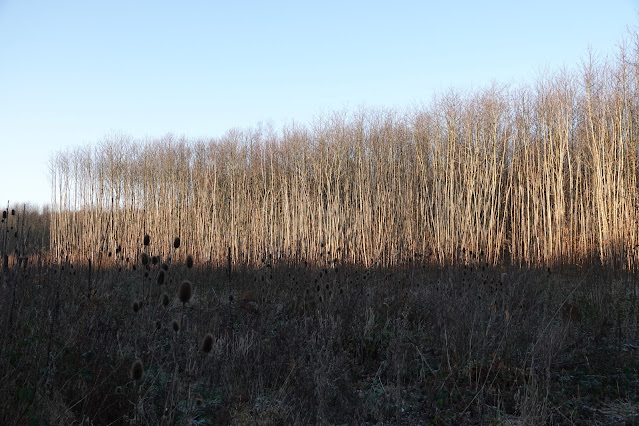 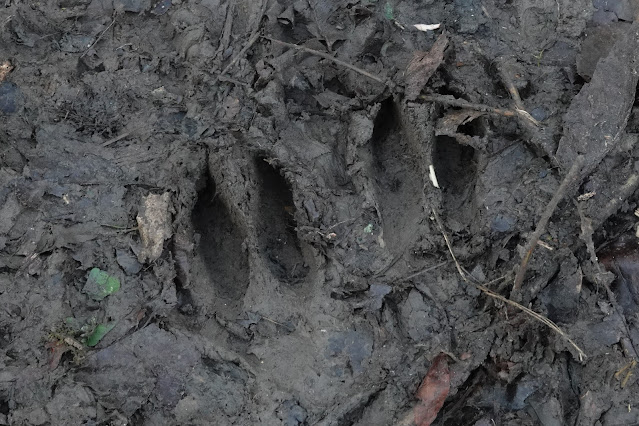 The only invert that I saw was actually a very cool Harvestman but not one that I have ever seen before.  It was sitting sunning on a trunk with its legs (of varying stupid lengths) out parallel to the body.  I believe it to be Dicranopalus ramosus. Just look at those modified palps like Lobster claws! I found lots of Stigmella aurella leafmines but very few Coptotriche marginea on the Brambles unlike last winter. 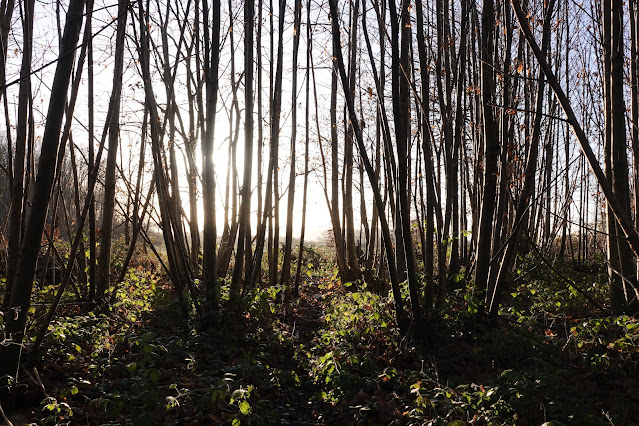 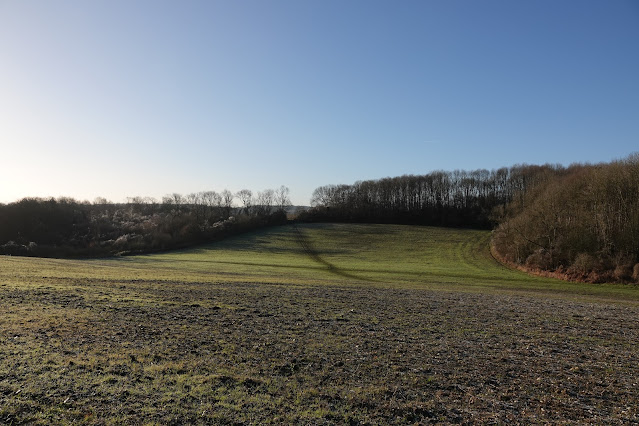 I looped around towards Kitchen Field finding some nice flowering and fruiting Butchers Broom on my way before wiggling through the woods on a new trail past two huge Yew trees that I had never seen before and then popping out as I hoped, by the Mausoleum.


There was now a keen breeze blowing from the north so I dropped back down to the corner by Knights Farm before sloshing my way through on the flat to get back to the car.

It was not an overly long walk but it as been months since I have been out here and I just needed a fix to remind me of what I have been missing.