I have not been out for a local walk for what seems like months and while standing outside at 10pm last night and marvelling (not quite howling) at the gleaming full moon with it pinky Mars neighbour I thought that if it was as cold and crisp in the morning as it felt now, then I should really take myself out for an explore.  It was so bright up my garden that I could see most colours and I cast long shadows out behind me.

And so today did indeed dawn bright and very cold with the first frost of any sort this season for us down here.  I layered up and after a few early morning jobs I was parked up at the end of my road by 8.30.

The tunnel under the M2 into Ranscombe was even colder than the outside and it is also a real pity that the wonderful mural has now been completely obliterated.  I promised myself that I would not get overly distracted by leaves and I was actually quite restrained partly because of having to get help to decipher or correct my moth mine identifications and in fact I only picked up one Oak leaf and avoided any Hawthorns this time! 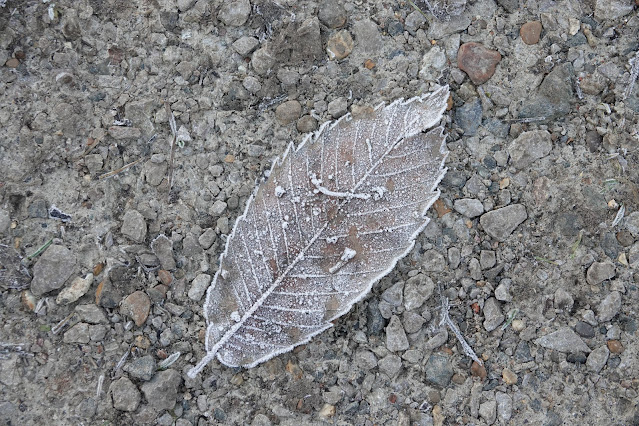 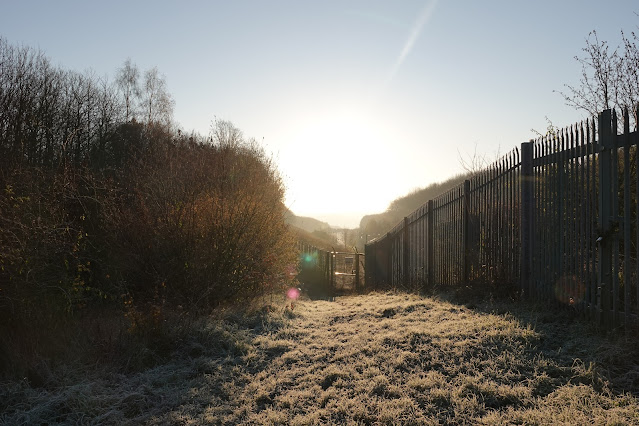 Just over the Eurostar it was still in full shade and everything was covered in a spiky white quilt of needles and so I opted for the route into the first clearing where I could see the early sun illuminating the Sweet Chestnut leaves remaining on the low new stool growth.  There was not a sound other than the odd falling leaf. 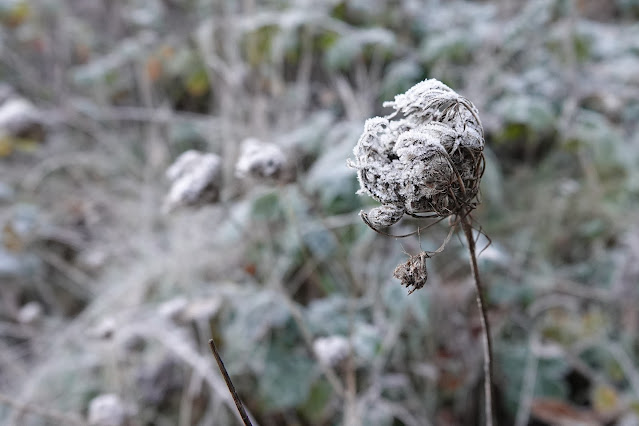 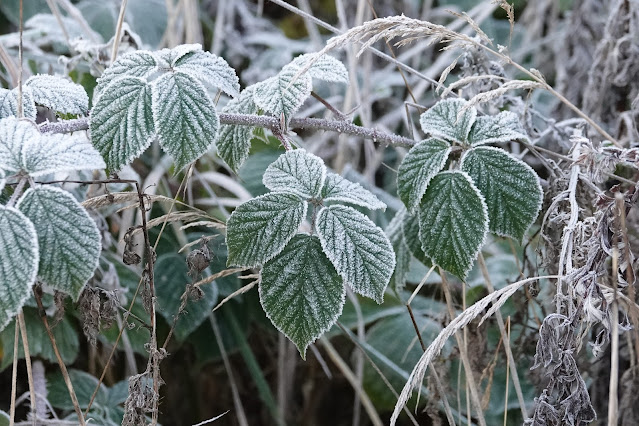 Each leaf of Holly and Ivy (how festive) was dark green and rimed with a Margarita frosting of ice crystals and a lone Robin appeared silently on the path in front of me before becoming furtive once again. The light was wondrous and allowed me to play with the camera looking into it. 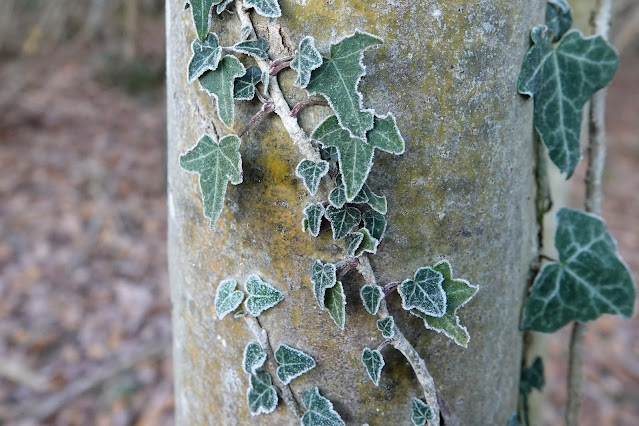 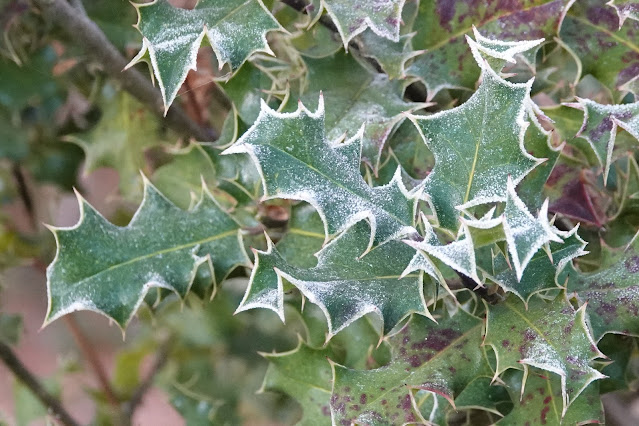 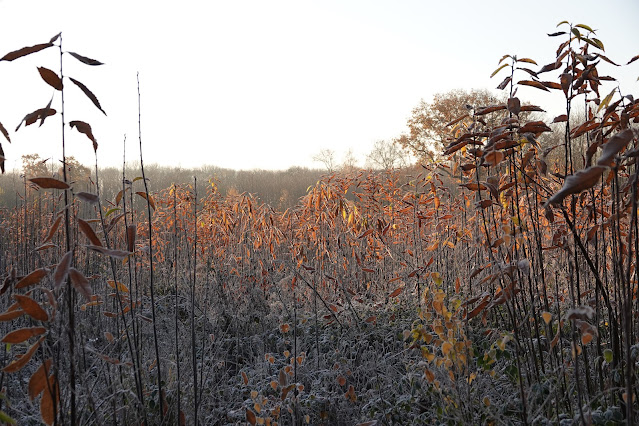 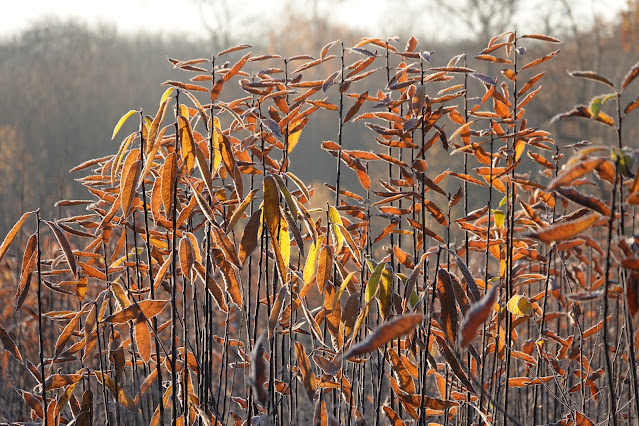 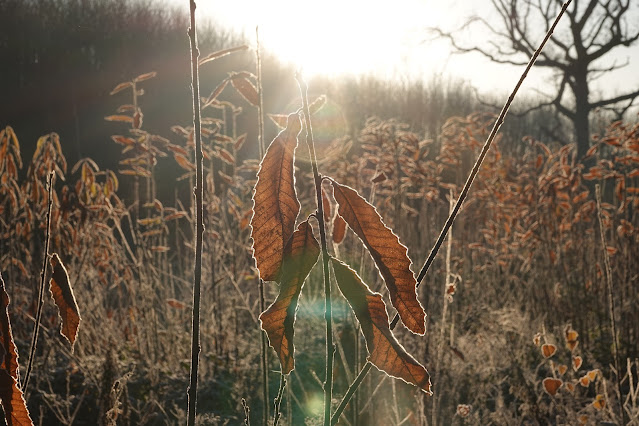 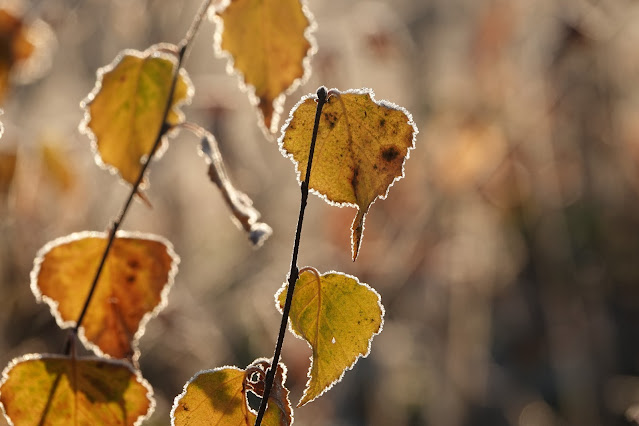 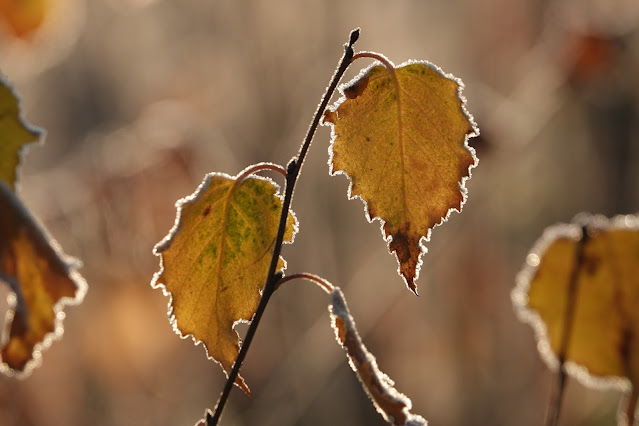 Just near the Lady Orchid spot there was an intensely cold frost pocket and the ice needles that had grown out of every inch of leaf litter and living plant were most impressive. The sun was going to have its work cut out to melt back there wintery fingers. 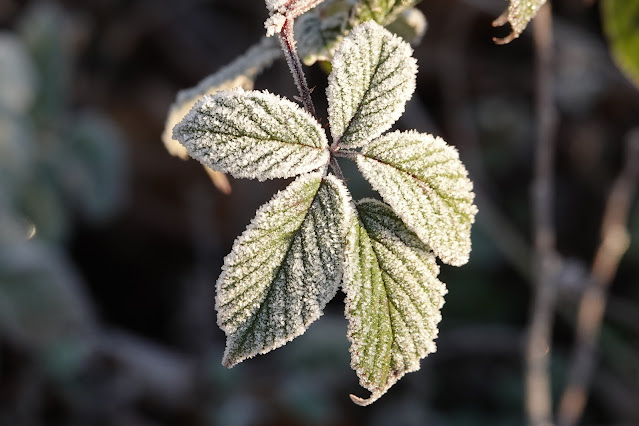 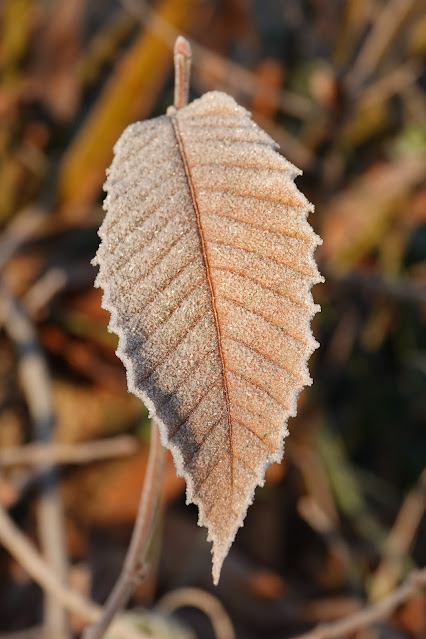 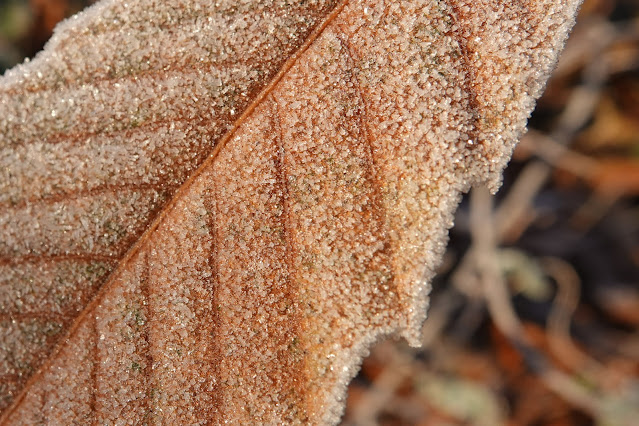 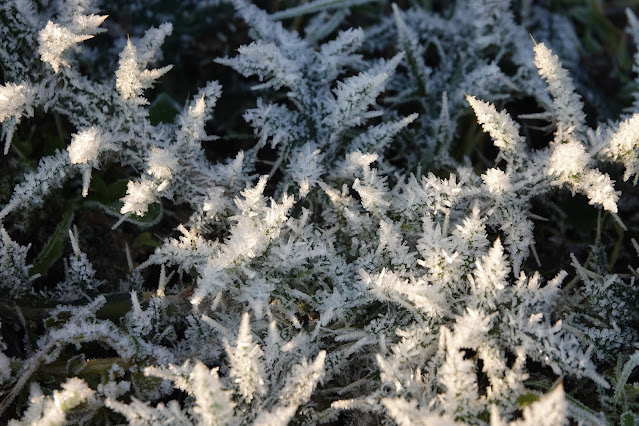 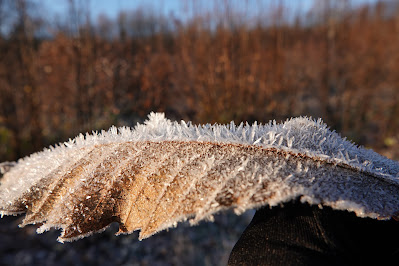 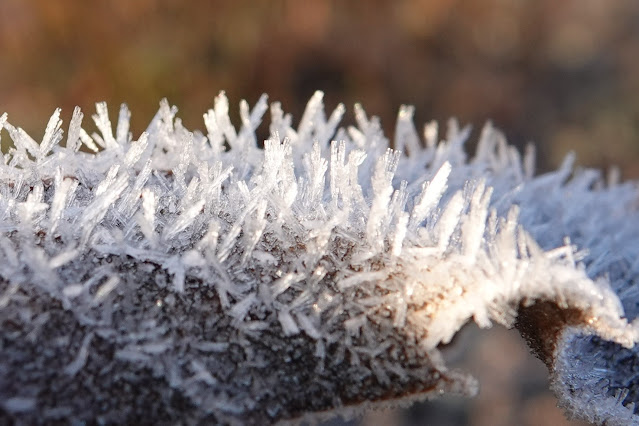 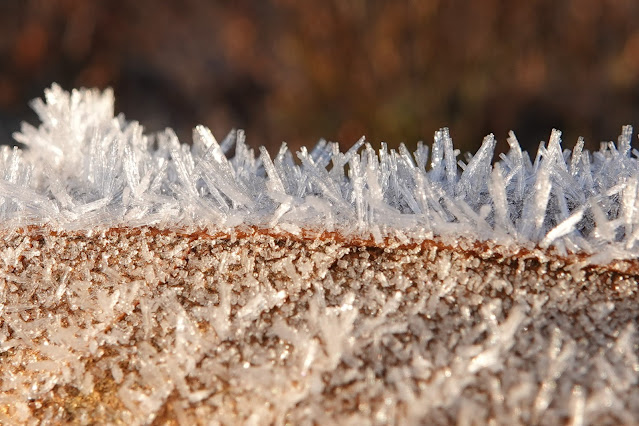 A party of tooting Bullfinches moved almost invisibly through the Birches with calls slightly harsher than normal but they were where I usually see them so I do not suspect an Continental influence.  Amazingly the only bloom that I discovered was two purple Nettle Leaved Bellflowers!

I popped out onto the crisp farmland looking down at the actual Ranscombe Farm and then followed the path around to Birch Wood Corner.  The top section was actually alive with birds for a change and there was a good mixed flock of 40 Goldfinch, 30 Chaffinch, 12 Linnets, four Meadow Pipits and to my delight six Reed Buntings which I can’t remember ever seeing on site before now.  The Goldies were attacking the Teasels and several Skylarks were out in the field where I saw all those fabulous Fallow Deer in the summer. Three Red-legged Partridge bolted from cover – these too were my first here.


Down at the corner itself there was a playful flock of mixed Jackdaws and immature Rooks probing the field before pretending to be lifted by a non-existent breeze to swirl around and come back down once more. 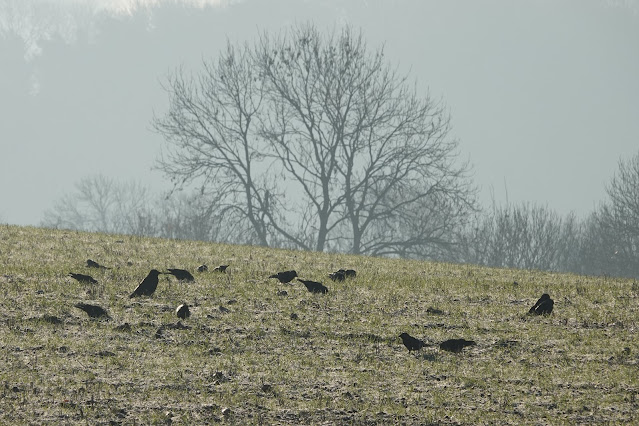 I followed the path towards Sam’s bench – almost two years to the day and had a cuppa and croissant watching the slightly misty frosted view while a party of Long-tailed Tits and Goldcrests bimbled through and even came down low enough for me to see properly.  Green Woodpecker yaffled and a Great Spotted Woodpecker was quietly tapping while two Jays screeched their way ahead of me down the track just to make sure that any Fallow Deer would melt away.

Another coffee at the top of Kitchen Field and then onto the down and up through the Sweet Chestnuts before swinging up towards the Mausoleum.  I could hear Treecreeper and Nuthatch and it was otherwise so quiet that I could hear their flicking wings and tapping bills fifty yards away.  The flock came closer at which point the Nuthatches got agitated and upped the volume somewhat.  It was easy to be distracted by the falling leaves and they would tumble and spiral, caught in their own little personal vortices before joining their brethren on the woodland floor. 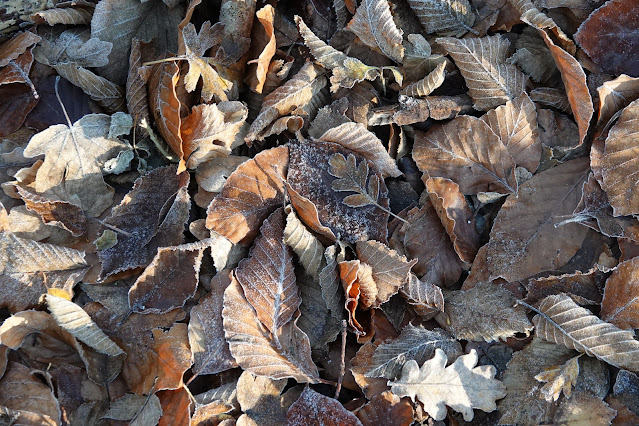 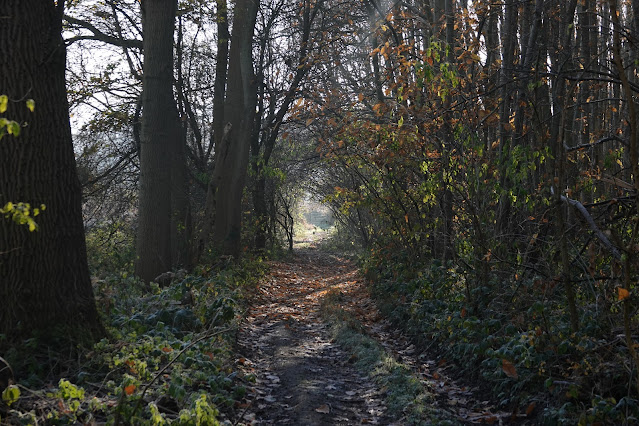 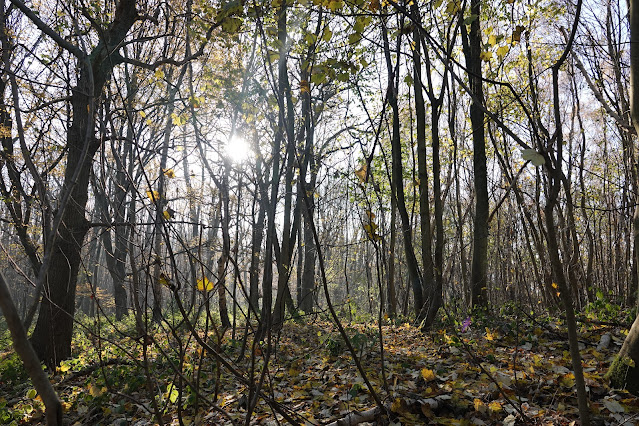 The Mausoleum was wrapped under a winter coat and would appear to be having a much needed facelift as I headed past onto the main drag back though the middle.  The local Moles had been busy and all their hills were frozen solid. 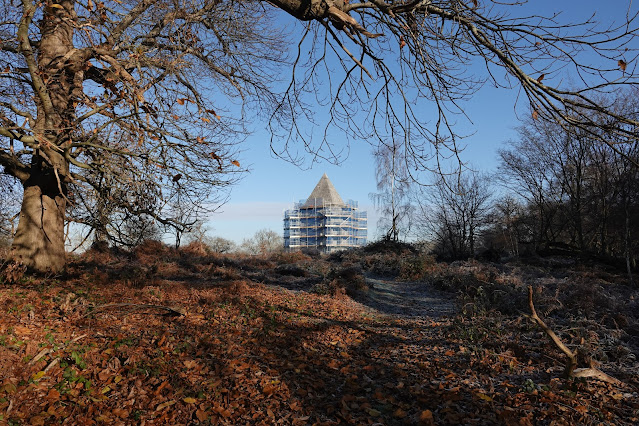 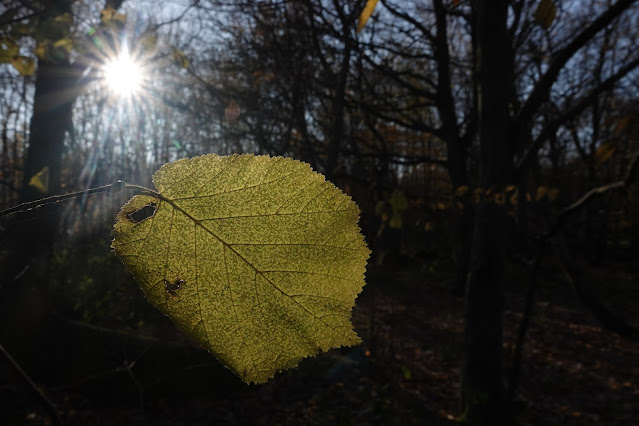 I said hello to my favourite Sweet Chestnut and apologised for my absence and then ambled back down the hill towards the car passing my regular Cladonia lichen log and the two proud Purple Emperor Oaks that were now standing clear and proud of the surrounding leafy sub-canopy. Let’s hope that there are Emp Cats lurking in the path side Sallows (which all have huge leaves here).

My forage pouch was full of autumn leaves with wiggles and blotches for later examination and I crossed back over the railway with a singing Mistle Thrush mournfully reminding me that far more inclement wintry weather was on the way.

I shall add the leaf mines a little later once 'I' have sorted out the identification!

oh and here they are just one day later...