Thursday morning saw me heading up the M11 to a work meeting in Norwich and the early start to avoid traffic on the southern half of the journey meant that once I had secured a cup of coffee at Thetford I made for Thetford Warren to see if I could find any Woodlarks to go with my brew. It was very cold and still with not much hint of the blue sky that was to dominate the day while I was at my meeting in the dark purple basement of the King’s Centre.  There were even a few solitary snowflakes as I wandered out onto the heath to investigate the old rabbit warreners Lodge building. Away from the road I could indeed hear the hoped for Woodlarks although they remained invisible along with rattling Mistle Thrushes, mournful Siskins and a calling Great Spot.

With coffee consumed and ears cold I headed back on my way. The meeting with fellow RSPB staff about how we, as an organisation, engages with ‘keen birders’ was excellent and productive and the day flew by before I escaped on the park & ride. I had already decided that coming to Norfolk for a meeting and not going proper birding was just wrong so I had arranged to stay with a friend just south of the city in Wymondham where I can heartily recommend the Railway pub for some fantastic grub and a nice pint of Adnams Ghost Ship. Cheers Angie!

Suitably refreshed I bid my farewells and headed out at about seven the next day for the slightly wiggly route to Blakeney.  It only took about an hour and I was soon in the Quay car park. There was not a breath of wind and I had not even got my bins out when a female Hen Harrier cruised through putting up seven Snipe from the marsh and given the Wigeon cause for flight. 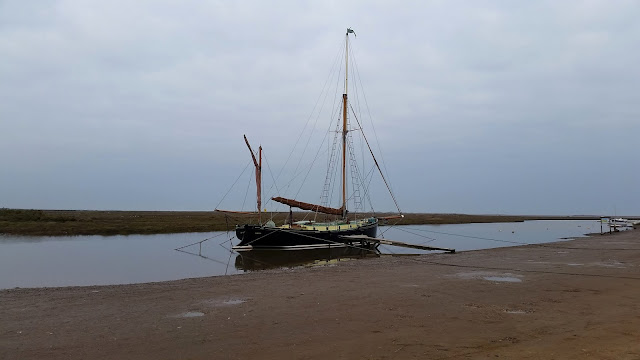 I suspect that the last time I walked this seawall was for the Greater Sandplover in August 1992 but it was the pool on the right of the seawall that brought back memories of one of my first trips to the Norfolk coast on the 27th September 1986 when we were amongst the first people to see a smart juvenile Citrine Wagtail tripping around the muddy edges. I can still hear that rasping call and everyone celebrating that they had nailed the id.

I just dug out that old notebook and brought back memories of my first Yellow-browed Warblers and a cracking Wryneck at Wells Woods the same day.

Anyway, I digress... the main reason for the visit was to try and find the flock of Lapland Buntings that had been around for a few weeks.  Up to seven have been seen with a similar number of Twite so both species together like in the good old days would be great.  One chap was just leaving as I arrived and told me that at least five were grovelling in the grass but that he had not seen the Twite. No sooner had he turned his back than the latter flew up out of the grass calling and landed briefly on the fence before heading off towards Cley... thankfully he was close enough for a shout from me to get him onto the birds.


I settled down to watch the Buntings and over the next half hour they came right out into the open and scurried over closer to feed at times no more than eight feet away. They were completely unconcerned about me and infact there were ten on show in a variety of plumages that included a couple of obvious males with much black coming through on the heads and flanks. 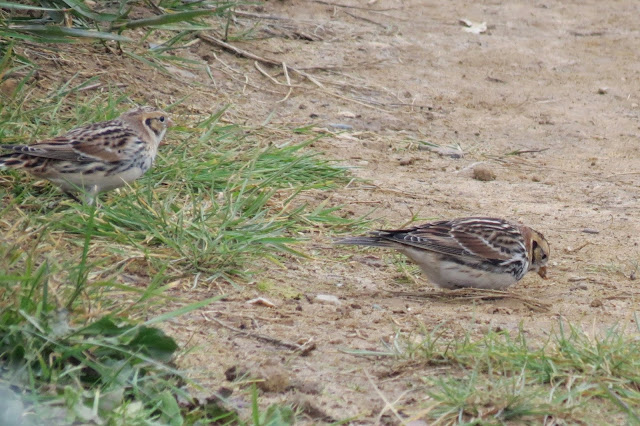 They were very conversational with much rippling and little, almost Brambling, like dweak calls. I left them where they were and started to walk back. It was so nice to have such confiding birds to myself.

Scanning round revealed a very large flock of grumbling Brent Geese and the usual assortment of waders were roosting up over the not very high high tide. I tried not to look too long into the famous duckpond where Garganey and Ferruginous Ducks paddled around with more exotic fayre.


After a chance meeting with Carl Chapman I had directions for Holkham Park and I headed that way in the hope for adding a slightly better looking two winged Fudge to the list.  It was a nice day for bumping into people and a quick chat with the Holmans told me that any birders in the Park would be looking for the pair of Ravens that had been seen for the last few days as this species is still very rare in Norfolk. 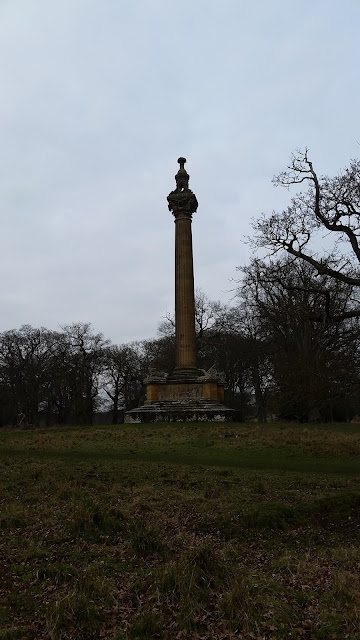 I saw no Ravens, or Scaup, or Fudge Duck but it was a very pleasant stroll with the melancholy song of Redwings coming from the huge twisted Sweet Chestnuts, Nuthatches and Treecreepers zipping around and the constant honking from the permanently stroppy Egyptian Geese. I love seeing these perched up in the trees and checking out old stumps and holes. They have such wonderful characters. There were not many Pochard and Tufted Duck to check through and although I did find the nice female Red-crested Pochard my main quarry eluded me. 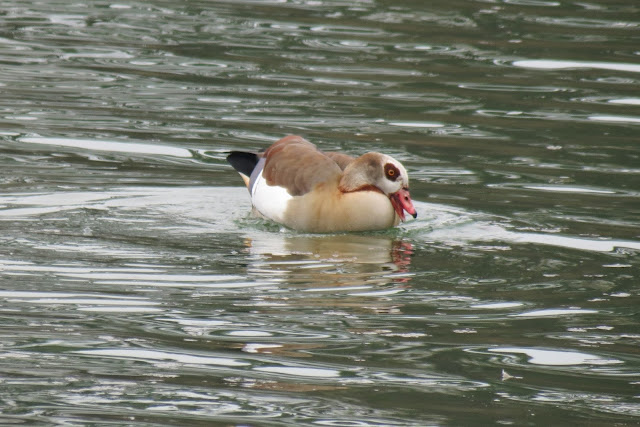 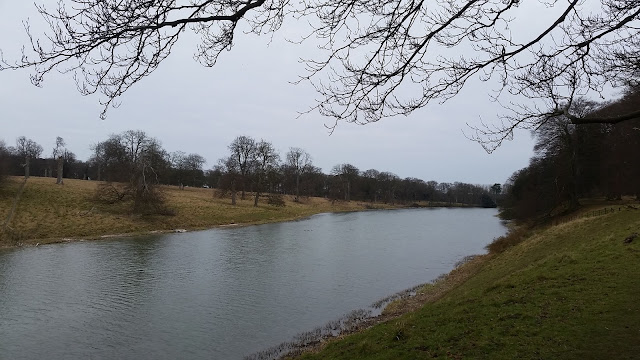 On to the Warham crossroads for a long walk down to Burham Overy Dunes and hopefully the Gun Hill Shorelarks. I spent a happy few hours wandering around with the sound of vast flocks of Brent Geese and Pinkfeet filling the air and the constant patrolling by Red Kites and Marsh Harriers giving them cause to flight. The Kites were the undoubted highlight with small groups of three or four drifting lazily across the marsh while Buzzard sat on posts waiting for something to drop down onto. There were simply raptors everywhere and I reckon that I saw at least eight Kites and harriers and the best part of 20 Buzzards with kettles of birds thermalling over the woods and park. How things change. 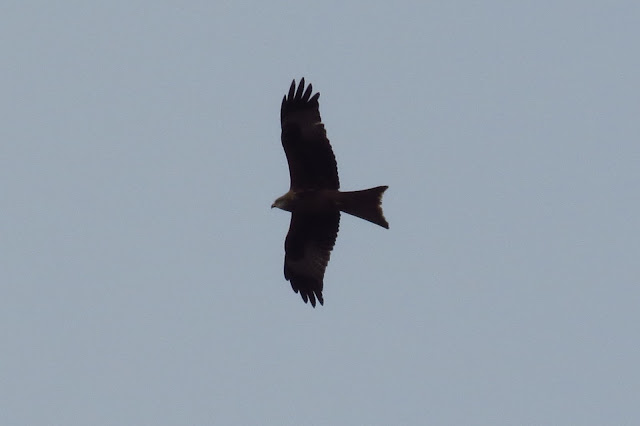 I was just pondering whether the Spoonbills would be coming back soon when an adult flew into view and I would later see an immature heading out into the creeks to feed at low tide so that answered that question.

Regular goose scanning eventually produced what I thought to be a Black Brant but the back did not look any different than the Dark-bellieds and two of the very helpful Holkham Estate wardens pointed out that it was one of the regular hybrids that has been frequenting the area.

I walked the loop of the beach west towards Scolt head channel but of the Shorelarks there was no sign. I fact the only two species I saw utilising the tide line were four each of Red Kite and Grey Partridge.  The idea of Kites hunting beaches was just plane odd but judging by the crop of one of the birds it had obviously been doing ok. Three Goldeneye were feeding in the low tide channel and I took five to sit down, close my eyes and listen to the sounds of the feeding Curlews, Oystercatchers, Redshank, Grey and Ringed Plover while Black-headed Gulls chatted around them.

There was more of the same on the way back and a final scan around from up by the road produced four piebald Barnacles with the Pinkies to round things up nicely. It was 2.30 and I was starting to feel under the weather so I headed for home which in typical Friday night tradition became a traffic nightmare and saw me diverting through Thetford and down towards the A14 and Ipswich and the A12 but even then I could not get home with the QEII bridge area being stuffed and after some dinner I gatecrashed the Jacksons place, had tea, cake, watched the Rugby and got home not long before 11pm!
Posted by Howard Vaughan at 14:19