It has been a few years since I have been to RSPB Snettisham to witness the spectacle of the high tide wader machinations out on the flats.  Last time we crunched our way down the beach in the freshly fallen snow with Snow Buntings and Shorelarks at our feet but this year has seen these species hard to come by and we had to make do with a glorious sunrise that cast a pink glow across the still exposed mud and highlighted the undersides of the Pinkfeet and Black-headed Gulls that were coming in from their night time roost out in the Wash. 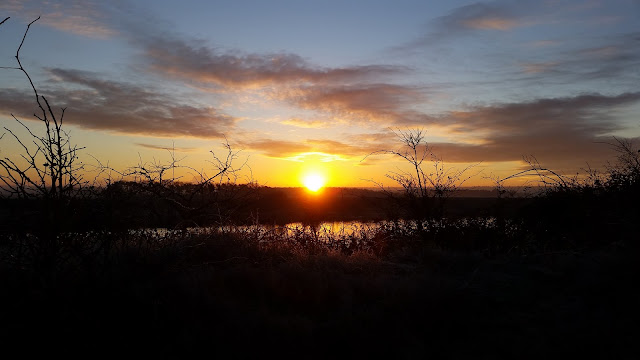 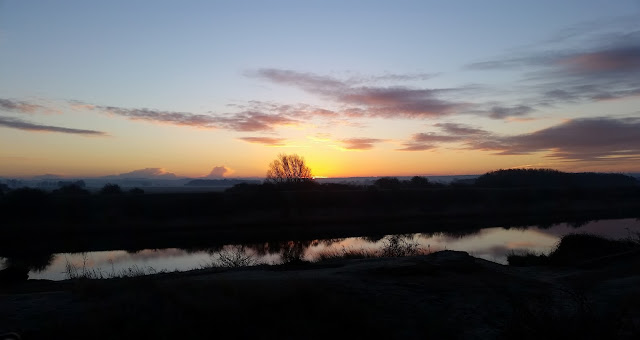 I did not think that a 6.30 meet was too odious and the calm, still conditions and almost cloudless sky boded well for the first few hours of the day. 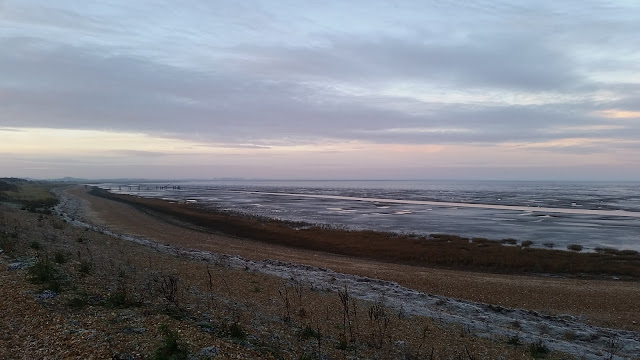 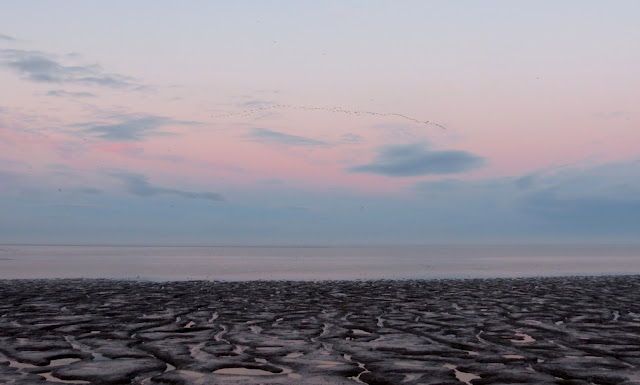 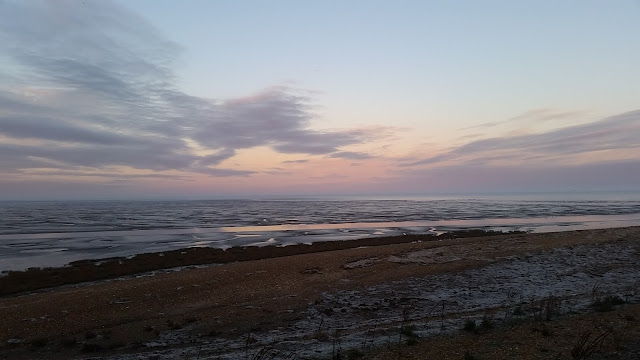 Waders were already streaming past with Knot, Dunlin, Bar-tailed Godwits and Oystercatchers in the majority and we soon made it to an appropriate spot with a rather large crowd of expectant onlookers. 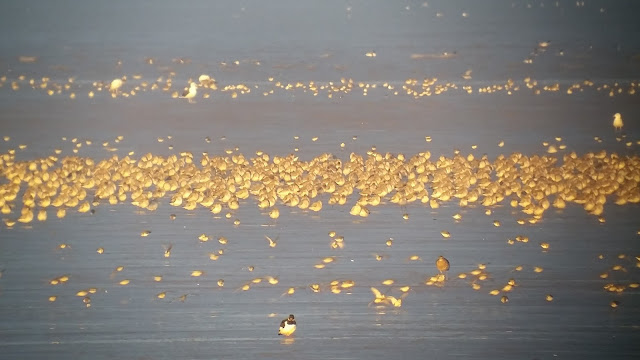 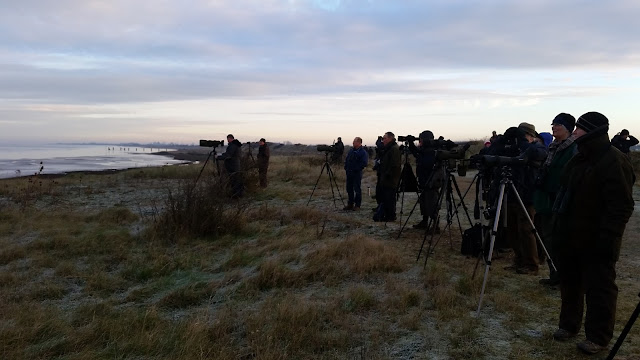 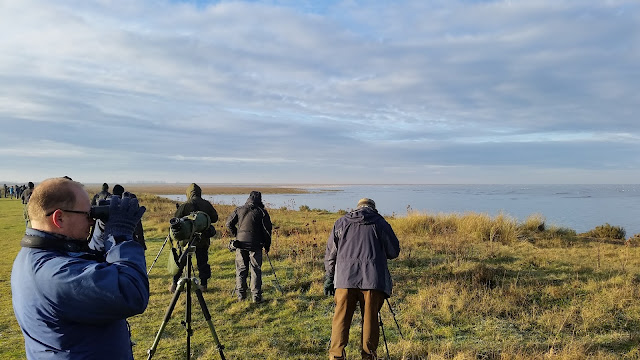 Things started well with thousands of birds massing on the mud with groups zooming in over our heads to settle down early on the gravel pits. Turnstones were the first in along with a few Redshank and a couple of Ruff and Golden Plover but it did not take long for the Knot to start to move. The light came and went and then returned at the critical moment when the Peregrine came in for his second attack on the flocks sending them into a cacophonous, snaking, fluid conglomeration of silver, gold and white.


It was a birding experience not about the individual; it was about the collective – the flock as a single amorphous being that was simply BIRD. It was mesmerising and moving and made the hairs stand up on the back of your neck and we were lucky enough to have a windless, well lit stage on which the performance could take place.

Avocets, Grey and Ringed Plovers and Curlews were also to be seen and small parties of gleaming Sanderlings arrived late and headed for the beaches rather than muddy spaces. Shelduck, Mallard, Teal and Wigeon bobbed around in the shallows and there were even Pintail and Shoveler out there.  Brent Geese grumbled on the saltmarsh to the south and Pinkfeet continued to arrive overhead. 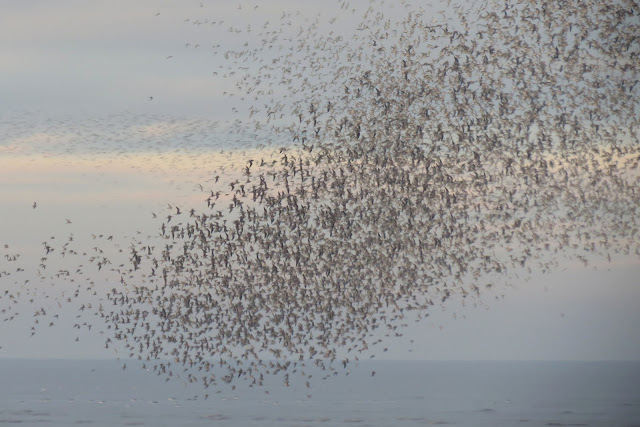 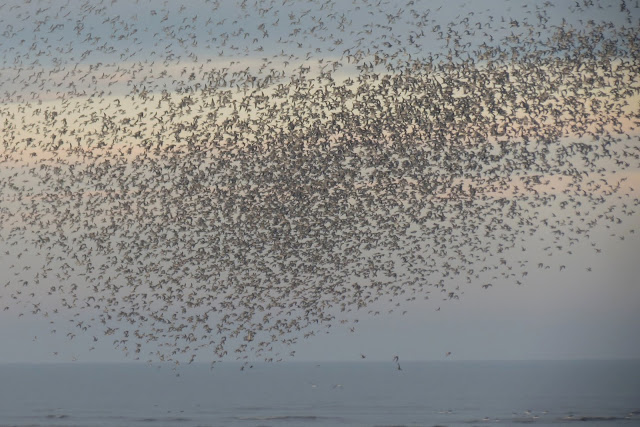 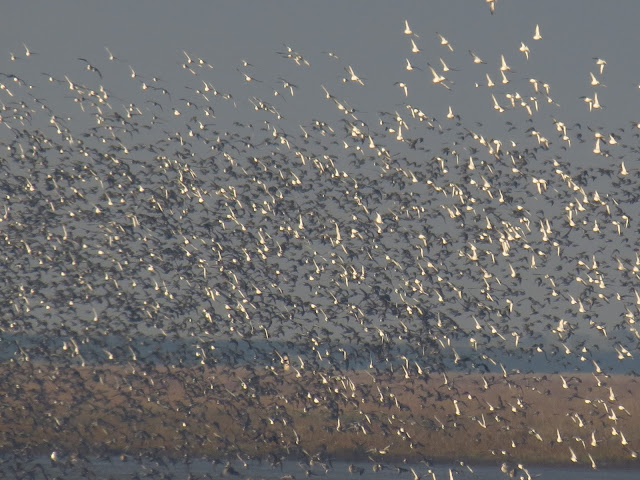 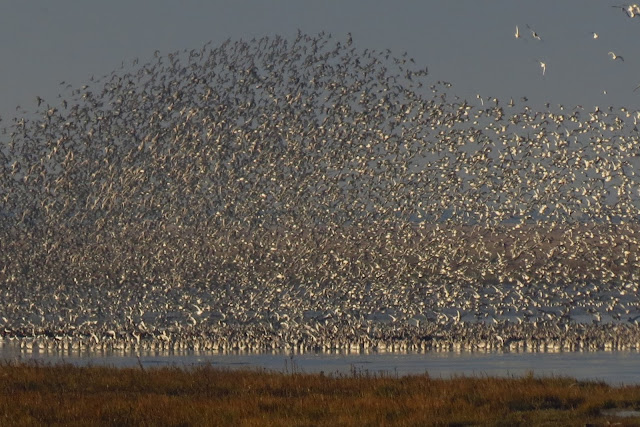 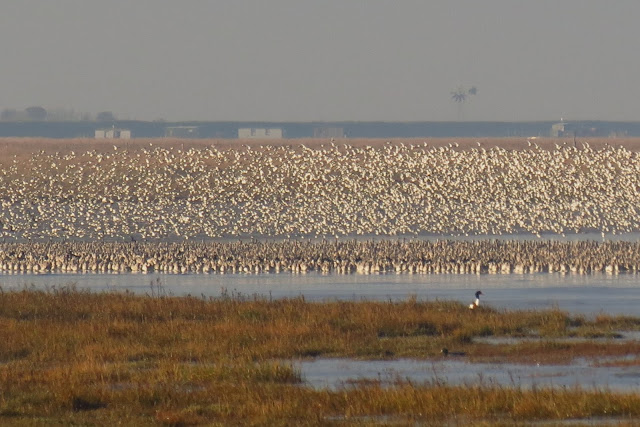 I managed some short videos of the pulsing mass of birds - simply mesmerising... 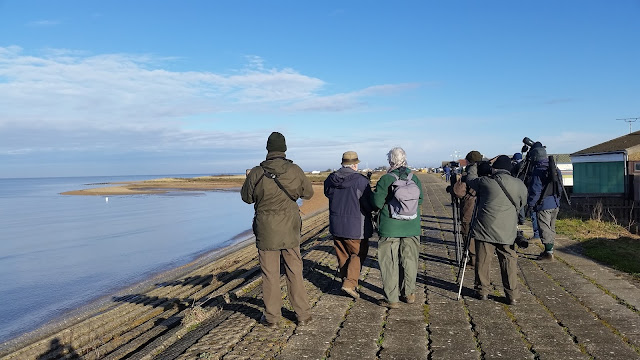 Inland, behind us there were large flocks of Lapwing and Golden Plover wheeling around and a Marsh Harrier quartered the fields.  Skylarks, Rock Pipits and a few Linnets made up the passerines and Goldeneye and Little Grebes were the sparse highlights on the pits.


We walked back in high spirits and Barry found two drake Scaup out on the flat see where even the green sheen to their domed heads could be seen and the Oystercatchers were entertaining as they jammed themselves onto a shingle point.

We headed straight off to RSPB Titchwell to make use of the facilities and have a cuppa while watching three Bullfinches feeding on Damson buds in the car park.


A swift bit of car amalgamation and we made our way east a little to find the harbour at Brancaster Staithe where a Red-necked Grebe had been present faithfully for some weeks. Strangely, I had had never been there before despite spending lots of time in Deepdale and we had this dapper, dusky necked grebe in sight almost before leaving the car. 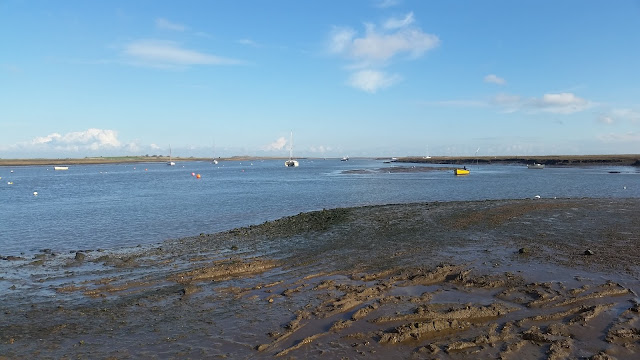 Over the next thirty minutes it got seriously papped by everyone as it energetically hunted in the channel just a few yards off shore.  Low tide helped us see it even better and we all loved watching it leap clear of the water as a prelude to a fishing sortie. 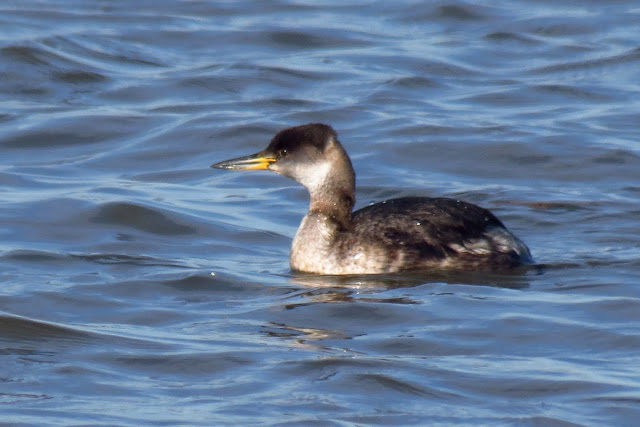 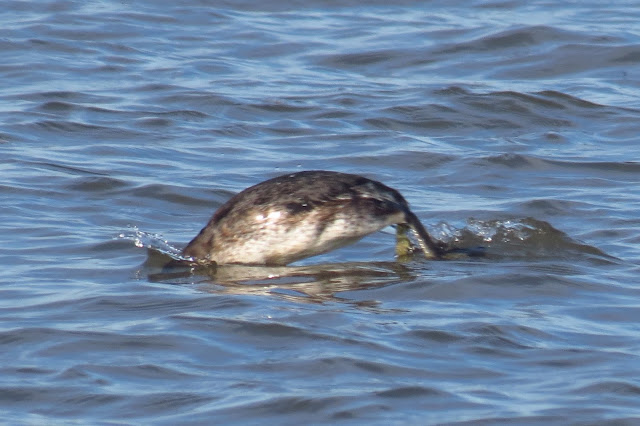 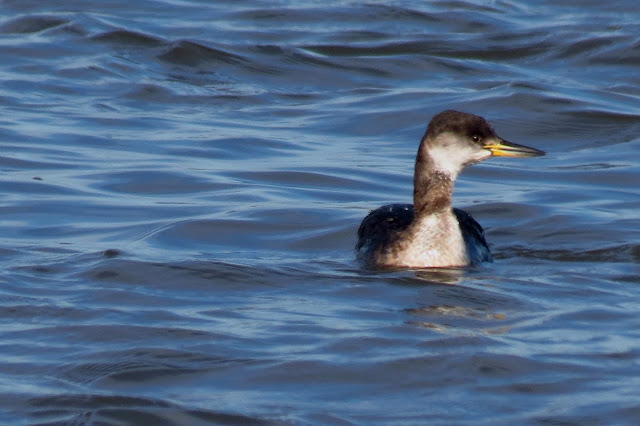 Three dour, sad eyed Grey Plover stop-start fed on the mud bank and there were singles of both godwits species and a solitary female Merganser fishing further up channel. Turnstones came to see if we had any scraps and a Rock Pipit called from the hull of a yellow dingy.

With the grebe safely in the bag we headed straight back to RSPB Titchwell for ‘lunch with finches’.  A short walk down to the feeders gave everyone superb views of at least two Bramblings and a dozen Siskins as they came to visit the station. The male Brambling was especially smart with much of the summer blackness wearing through and a single Marsh Tit added a touch of something different. 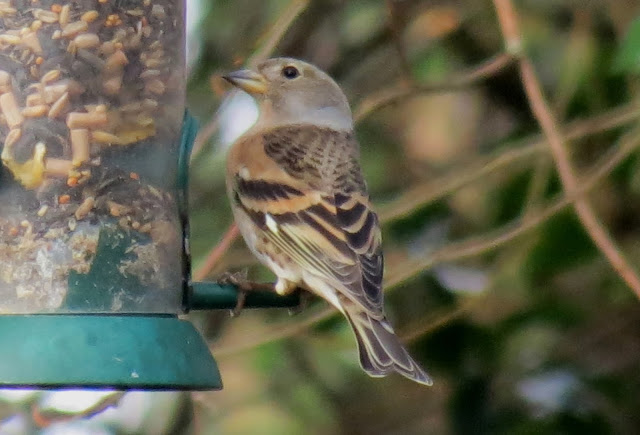 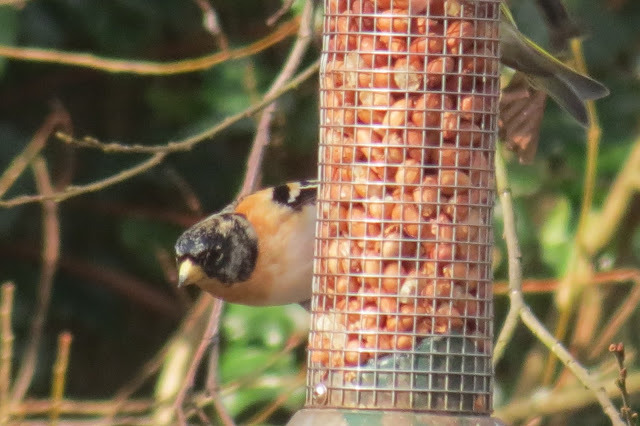 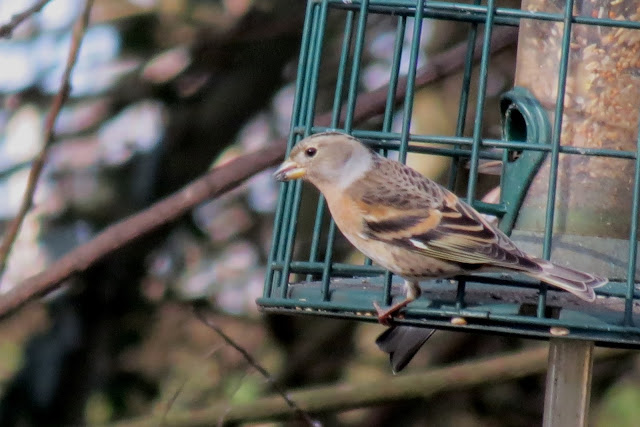 The water Rail showed incredibly well in the adjacent ditch and was happily unearthing worms and inverts with scarcely a glance up at the throng looking back.

I decided against heading out onto the reserve proper and so lunch was spent with even more finches, with the Bullfinches from earlier being replaced in the same Damsons with three pinky Lesser Redpolls.  Some rather rotund but very pretty Woodpigeons feed in the same trees and ogled us with their slightly odd shaped pupils! There are a seriously under rated bird. 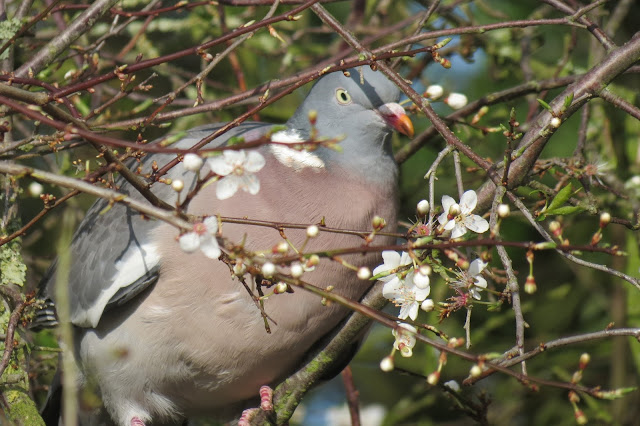 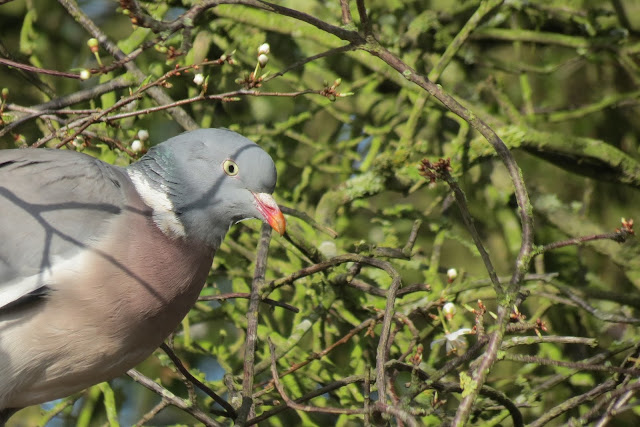 The lure of Rough-legged Buzzards dragged us away and across the road to Choseley where we played a game of ‘how many cars can we jam into a field entrance and soft verge?. The answer was nine but the car 'twister' was worth the effort as not only did we see a Rough-leg and at least ten Common Buzzards but I suspect that most of the crew were more impressed with the luminous Yellowhammer and beautifully marked Grey Partridges that were dotted across the fields along with some of their French cousins while the boxing Brown Hares were similarly popular. 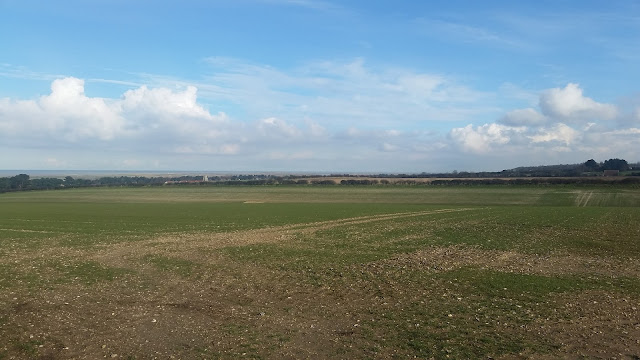 We could probably have spent a little longer here but with time pushing on I opted to head south towards Docking, Flitcham and then Roydon Common to give us a chance of connecting with the mobile but long staying Pallid Harrier. The nine cars precluded a stop at Abbey Farm but we did pass a large flock of Egyptian Geese on route to the common.


Following Alan Davies directions, we headed off through the trees before wending our way up onto the heath so that we could look down onto the bog below. This was another new Norfolk site for me and obviously undergoing some pretty full on conservation work with huge piles of spoil and new looking open water boggy areas.


We all settled in for a wait while Stonechats fed around us and Meadow Pipits started to arrive for the evening. The Pallid had been coming in at about 4pm so we knew that we had a wait on our hands but the time was well spent relaxing and soaking up the peace and tranquillity of the vista in the low evening light. The crowd slowly grew and by just gone four there were over 70 people present which surprised me but there was still no sign of even the Hen Harriers and we only had some Buzzards and a Marsh Harrier to watch.

Then suddenly two ringtail Hen Harriers appeared from quite high up and drifted down to the heather. I was expecting a good fly round and perhaps some pipit hunting before bed but both birds glided straight to their regular spot and ditched in the vegetation out of view.

The wait went on and the temperature dropped and then technically the sun had gone down and the light began to fade but still no one left. Another Hen came in and then two more and it was as we were watching this duo that Barry picked up the juvenile male Pallid trying to sneak past us under our noses. I called it but only a few people saw it and I feared that it had gone straight down to roost somewhere. Two minutes later I refound it and managed to get everyone on the right spot as it delicately quartered the bog on long narrow wings. The underparts were a  rich orange buff and the contrasts on the head with pale boa, dark collar, face and cap made it a striking beast. It perched up on a distant post and looked tiny compared to the two ringtail Hens that were still out hunting and after one last sortie out to try for a last minute Mipit it too dived in to the heather and did not return. Mr Jackson certainly earned his 'Spotters Badge' today... 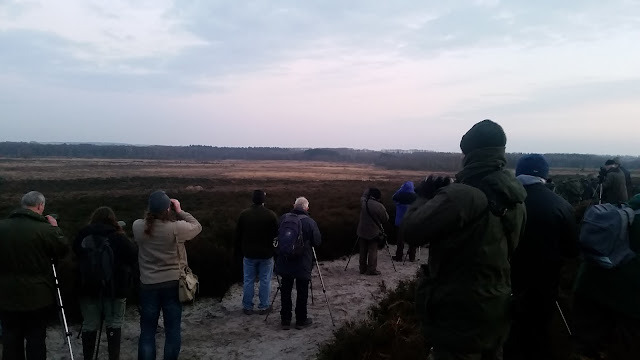 The fact that it actually looks like someone has dismembered Pat and dumped bits of him in the heather is merely a trick of the camera and at no time did any bodily harm actually befall him... 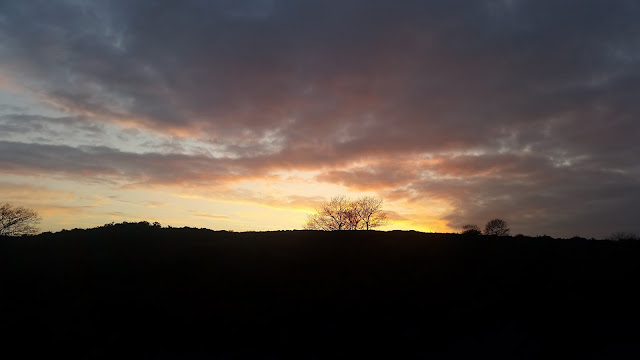 The crowd murmured its approval at this last gasp performance and started to disperse back to the cars in the gloom. The air was chill and still as we ambled back but there were smiles all round as we packed up to head for home but not before the obligatory Woodcock had found its way onto the list!