Mad Snakes and English Dudes go out in the morning sun. 31st July 2020


Friday was forecast to be beyond scorching but I had agreed to meet up with Carl for a country amble so I had to plan a suitable location to escape the searing heat.  I discovered last time that Carl had never seen a snake in the UK so I chose Fackenden as my starting point and investigated the maps and suspected that a woodland edge and meadow circuit was possible albeit with some degree of elevation!

It was already 23c when we met at 8am and a quick look for the Adders got the day off to a blingding start with three basking on the wood pile as the sun had just reached the timbers. We stood quietly and enjoyed the sight before backing away and leaving them in peace. 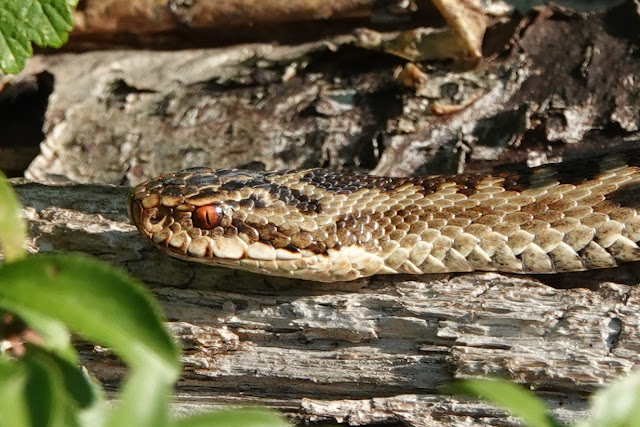 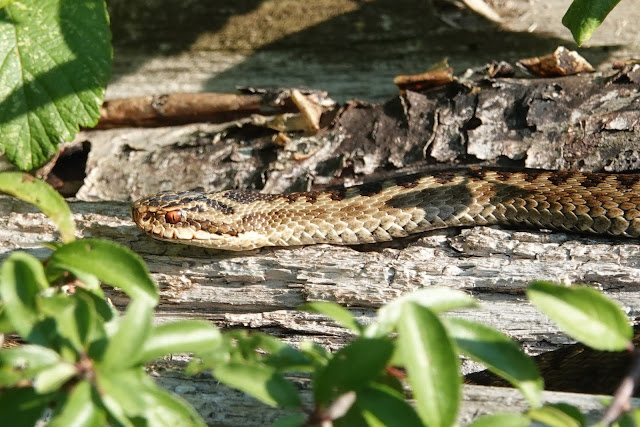 The main slope was still in shadow but there were already butterflies about as we headed up the main path and south along the escarpment. The view to the south west was superb and was not spoilt by the distant motorway drone.  The upper slopes were sun-kissed and literally quivering with butterflies. Hundreds of Chalk Hill Blues flickered low over the grass, alternating between grey and electric blue and Gatekeepers, Common Blues, Marbled Whites and Meadow Browns danced amongst them.   I am not sure Carl had ever seen anything quite like it. 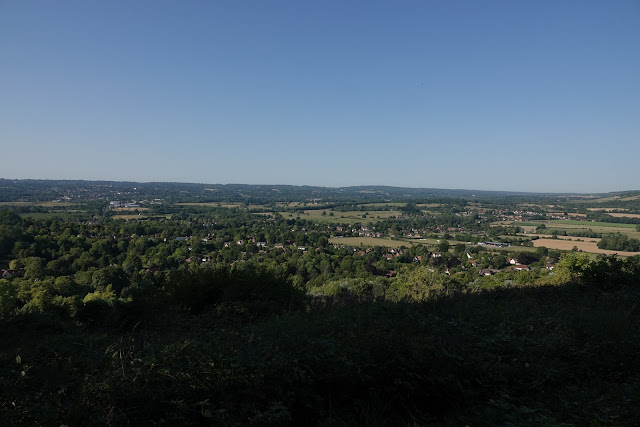 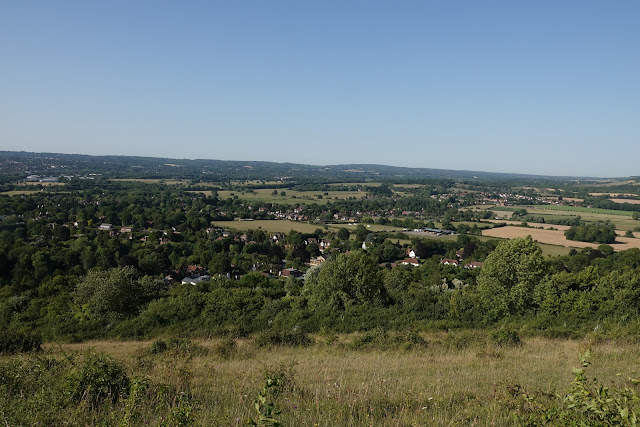 Brown and Migrant Hawkers patrolled and I found a nice fat Volucella inanis on the Small Scabious which I do not think I had identified amongst the more robust, bigger leaved Field Scabious till today.

The path took us into a patch of wood with Nuthatches and Bullfinches before popping out onto Rowdow Lane which we followed a short way though the leafy lane until we rejoined the footpath between Paine’s Farm and Yarrow filled paddock. This popped out into a wonderful meadow full of tall grasses, Knapweed and Hogweed and I found a few Grasshoppers and a big Hornet hunting down a fenceline. 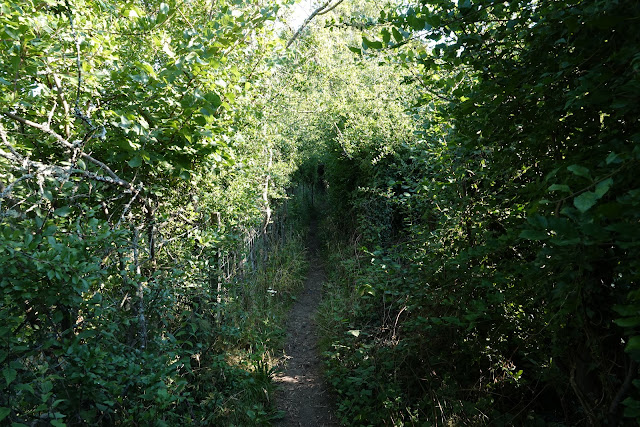 We entered into the cool dappled light of  a Beech hanger and out of the heat before popping out into a delightful hanging valley of meadows with the usual suite of flowers and insects (although no Chalk-hills here).  The path went straight up the other side and through some Yews and Whitebeam before crossing a livestock meadow to Magpie Bottom. 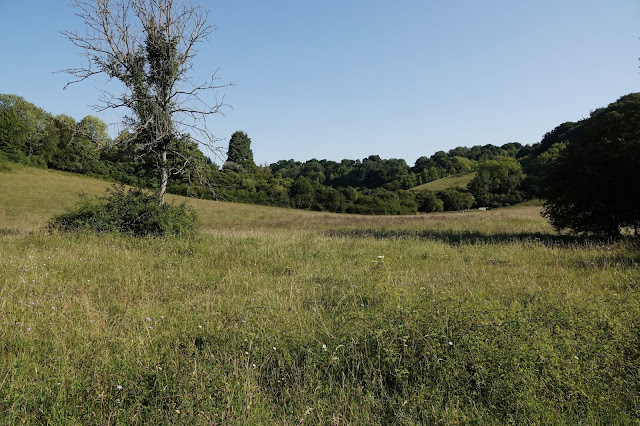 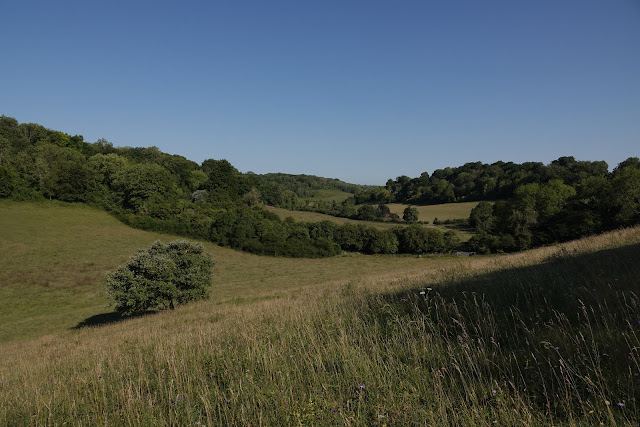 We hung a left and then right back onto the footpath and followed it all the way up to Romney Street Farm, down a footpath lined with brambles covered in the three Whites, Peacocks, Browns and Commas.

Left at the end then right heading north with Lower Wood to our right and another hanging chalk valley below us. This one was more vegetated with Composites and Knapweed but there were still butterflies to be seen and the woodland edge was covered in my now typical flora of Wild Basil, Marjoram, two Scabious, Bedstraws and even some Harebells.

Nemophora metallica was headbanging on the Scabious blooms and we disturbed several Six Spot Burnet Moths. Down in the valley bottom four well spaced out male Yellowhammers were singing but other than the odd Bullfinch, Green Woodpecker and hweeting Chiffchaff it was ornithologically quiet.

Sunlight was streaming into a clearing up in the wood so we went to investigate.  It was head high in Thistle and Ragwort and full of more dancing Butterflies and Hoverflies amongst the swirling Thistle down that was caught in the eddies circulating within. The heat was astonishing.

It was at this point that Carl found the object of the day – the empty shell of a Roman Snail. It was a real biggy and was still worthy of a portrait.  I have yet to see a live one it the UK but it is nice to know that they are still out there.

The views to the north and north west were huge with the whole London Cityscape spread out from the Erith Church steeple and Oilworks tower, the cranes over the piece of Fords’ being ‘housed’, the three Ford’s wind turbines, Highfield Tower in Collier Row, the Isle of Dogs, City, Shard and even what I am sure is St Pauls in the far left of the last image at 19 miles away with Joydens Wood in the foreground where we walked on the 16th June. 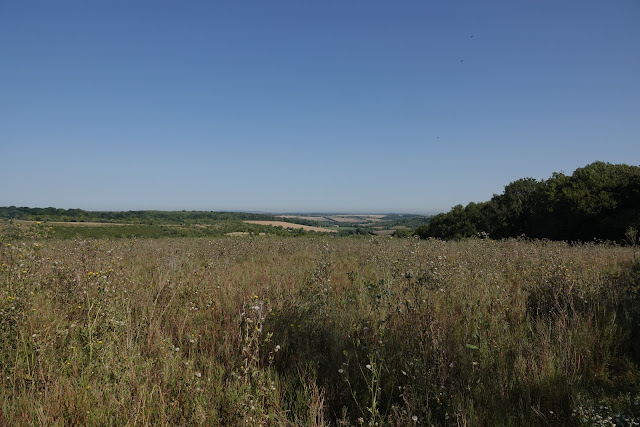 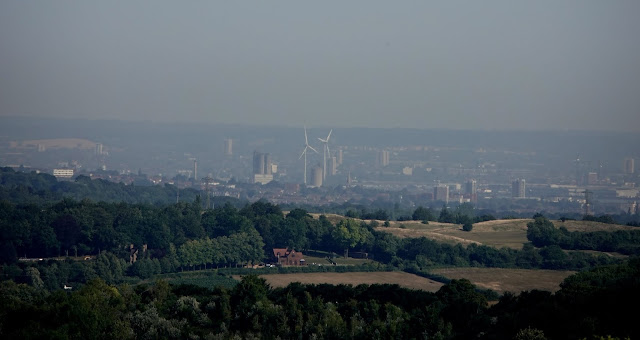 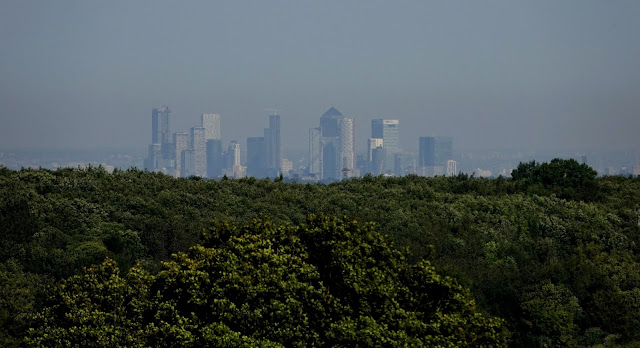 The maps says that we were looking down on a golf course but I am now very sure that it has been left to revert to downland and scrub. After descending off the slope via a leafy tunnel we then climbed again steeply, following an intriguing sign to the Pilcher Monument which is infact a large stone to commemorate the life of Percy Sinclair Pilcher and his pioneering work into aviation at the end of the 19th Century. 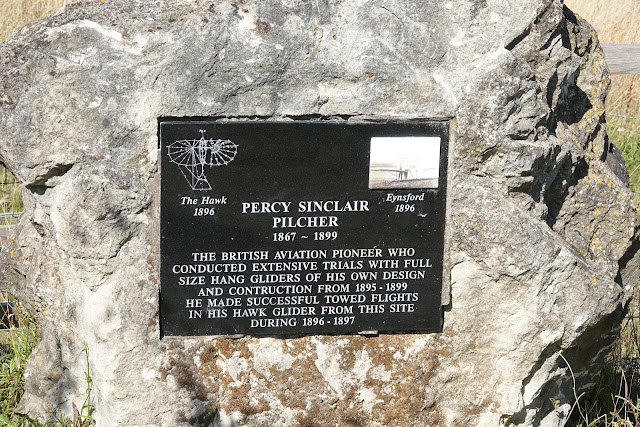 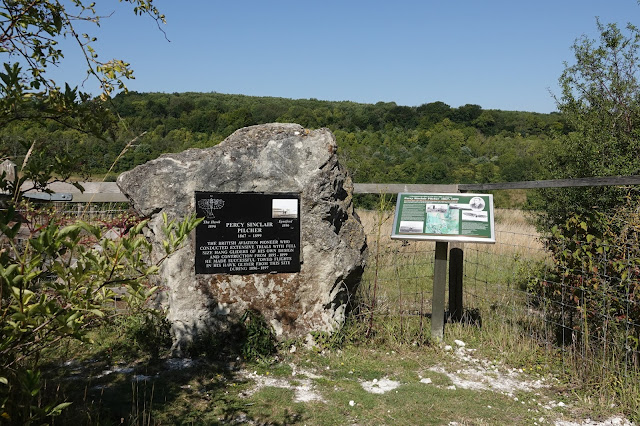 We may have been forced at this point to take a slightly unofficial route to regain the footpath but at this point we had only seen three people all morning! It entered the relative cool of the trees again before a steep stepped ascent back up to the ridge line and a lovely Red Clover meadow before wending its way through Dunstall Wood with its bolt upright Beeches, Oaks, Gean and Ash.  They were all mighty trees with a rich understorey of Hazel, Yew, Hawthorn and Holly but it was now so hot that they were preternaturally quiet as be began the final route down to rejoin Fackenden Lane and the cars baking in the sun.


It was a little after half eleven when we got back but the cars were reading in the low thirties already so we decided that we had had enough exercise for the day and went our separate ways towards lunch and a cold beer. 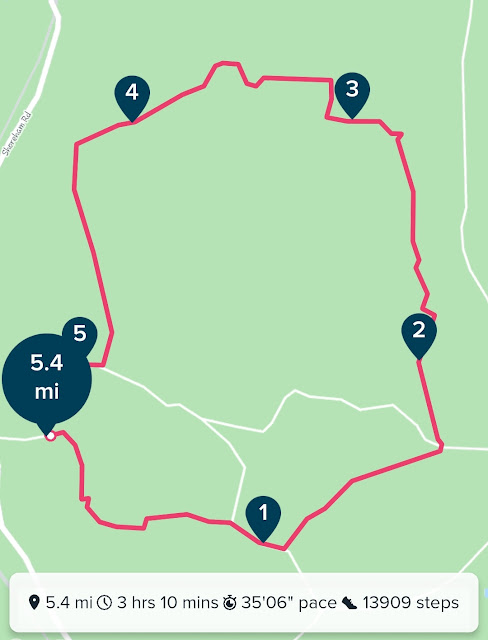