With another sunny start to the day I made a more concerted effort to get out there and explore.  The wind had gone and there were remnants of frost on the ground and it was crisp and sharp. However, I was in a dithery mood and was not entirely sure where to go so I started up my road which at least would give me two options at The Bounty.

The Mistletoe was looking especially circular in the canopy of the monster back garden Poplar that must shade out a dozen gardens in the summer and the small party of Redwings that I saw yesterday on my way home were still bombing around. 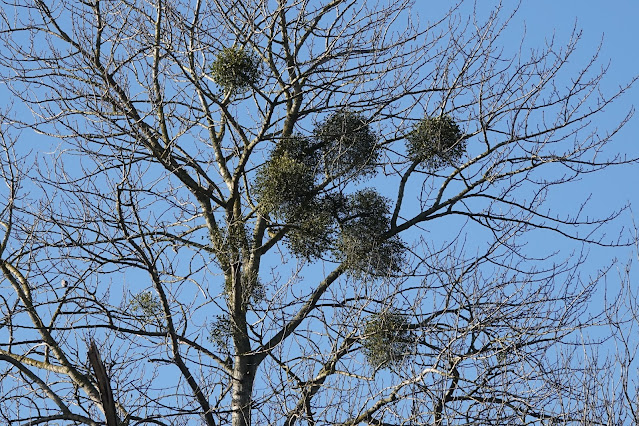 At the top I decided to head away from Ranscombe and off towards Higham for what would turn out to be a new loop of the area – at least in part. I turned into Crutches Lane where I could not resist checking the Pyracantha for Phyllonorycter leucographella before a mob of House Sparrows caught my eye as they chillily sunbathed with fluffed up feathers while up on a chimney pot a Starling was in full throat warble although I did not notice till I got home that the white breast chevrons were unusually huge although still with a black border. I just thought that it was very shiny! 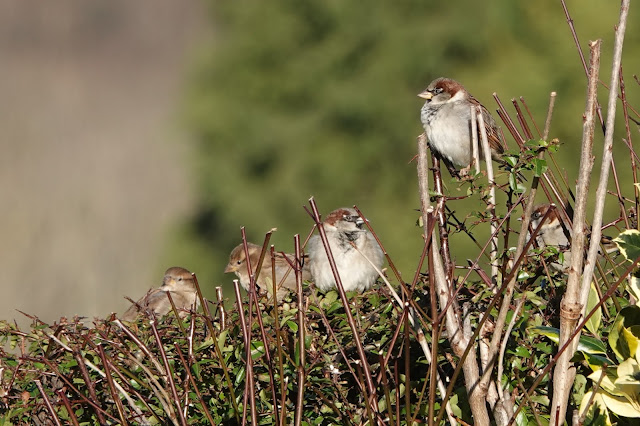 I entered Great Crabbles Wood and stayed on the lower path all the way through.  Redwings erupted before me and a calling Ring-necked Parakeet hinted at another mile move to the east.

A male Goldcrest came down to bathe in the water that had collected in the battered surface of a discarded road sign and although he then sat up and had a full preen, I was just too far away to get any shots but was more than happy to watch him dry off.

Bluebells were further advanced here than in Ranscombe and the Celandines were already forming mini-mats amongst the fallen leaves. I veered off to what I call The Pit to see if any of the Early Purple Orchids were showing through and discovered seven– some with and some without spots.

I came out at Bowesden Lane and then made my way up the hill past the big houses which you can see more off with less leaf cover.  I listened for Firecrests but only had Goldcrests but a Nuthatch was singing and Coal Tits were vocal although lingering by the Holly did inevitably result in finding the fly mines of Phytomyza ilicis including a few that had emergent holes.

At the top of the lane I crossed over and squelched my way down to Starmore Wood. The dry ponds in the paddocks were now overflowing and collecting into a larger body of water in the corner where Redwings, Blackbirds, Chaffinches and Goldfinches were coming down to drink before it emerged at the other end and cascaded into the gully that runs alongside the wood. It gurgled and splashed its way through the fallen leaves and detritus and spread out to circumnavigate fallen trunks. It felt perfect for Woodcock but a little off path adventuring did not produce any.  At one stage the stream came back to the path and became it for a while before leaping off once more before emerging into the winter wheat field beyond to dissipate like a micro river mouth becoming an estuary as it enters the sea. 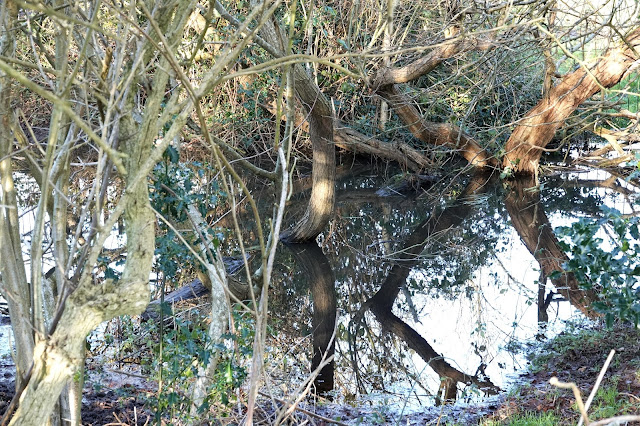 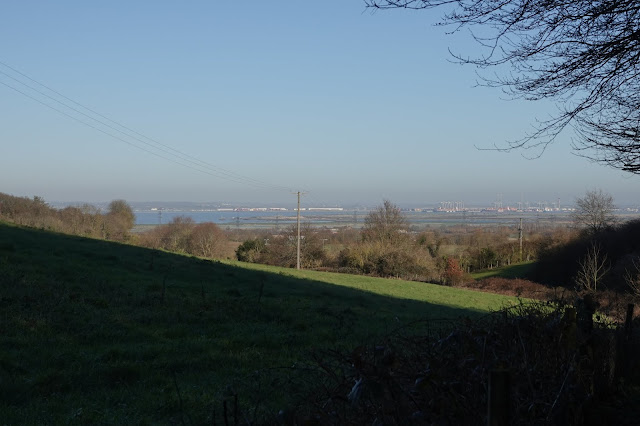 The views were superb and the tide was well in as I looked across the Thames into the Laindon Hills area of Essex during my coffee and hot cross bun stop and I could even see a swirling flock of shimmering Avocets in Higham Bight! From here on I was venturing into new territory as instead of cutting back across to the Gravesend Road.  Instead I carried straight on past the hill top Llamas and emerged to the west of The Copperfield PH where a smartly marked Buzzard was working from the paddock posts. 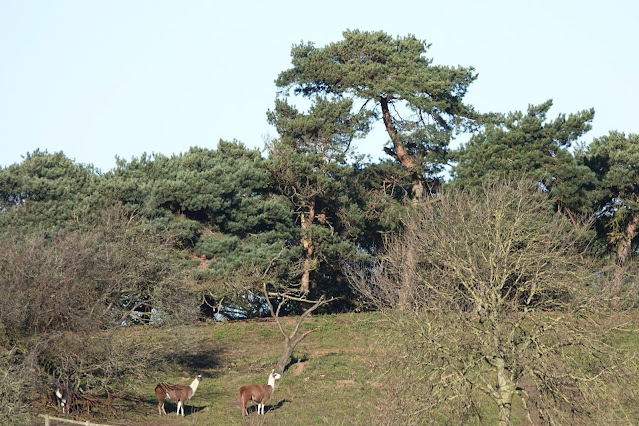 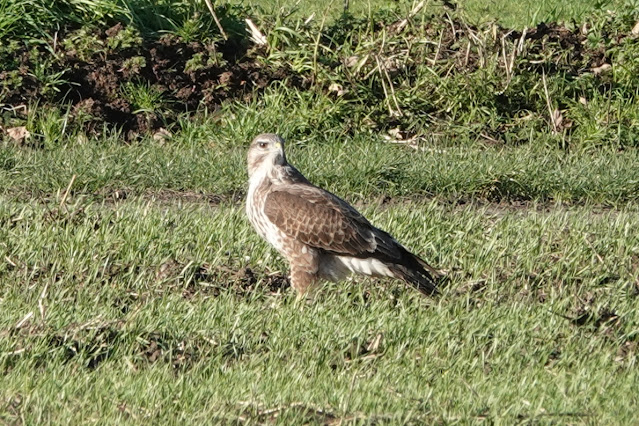 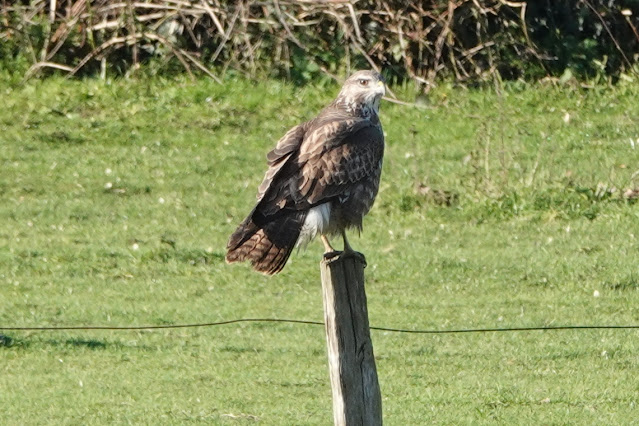 I crossed the main road and went straight onto the path heading north across the fields where seventy Fieldfares were foraging in the winter wheat. Some Bluebottles (without ginger beards) were sunbathing on a dead Elm log and I was delighted to find my first Hoverfly of 2021 with an active Episyrphus balteatus zipping around which was quite remarkable as it was only about 5c! 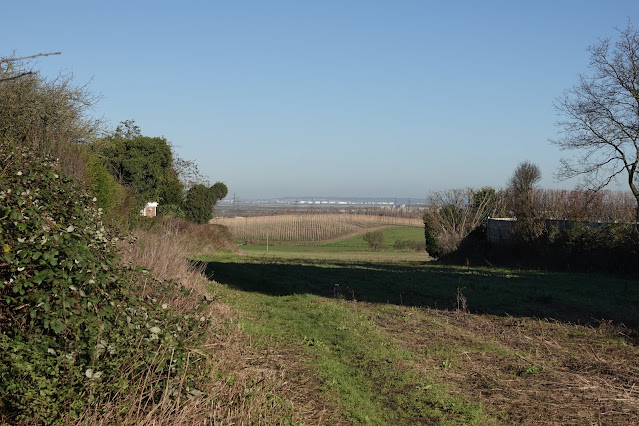 I had a good chat with two local Kentish birding Brothers out for a long circular walk and they pointed me in the right direction. The fields here have nearly all been given over to sparkly new orchards with thousands of small fruit trees standing to attention in regimented rows with canes and wires for support and huge tention posts at each end while a similar line of Alders has been planted around the entirety of the site. There must thousands of these too. With all the recent work there the Footpath sign had disappeared so my route added a few hundred extra yards as I followed a more obvious route down to Lower Road. 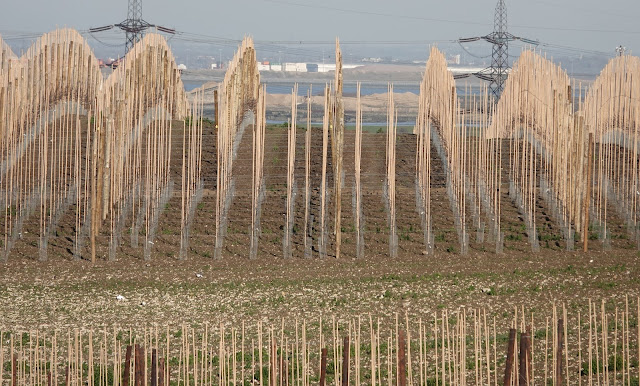 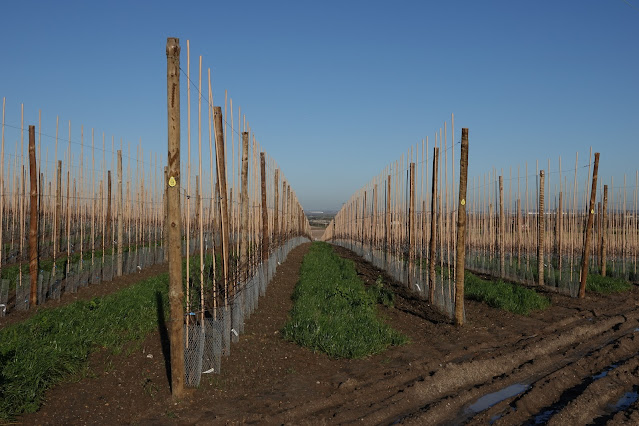 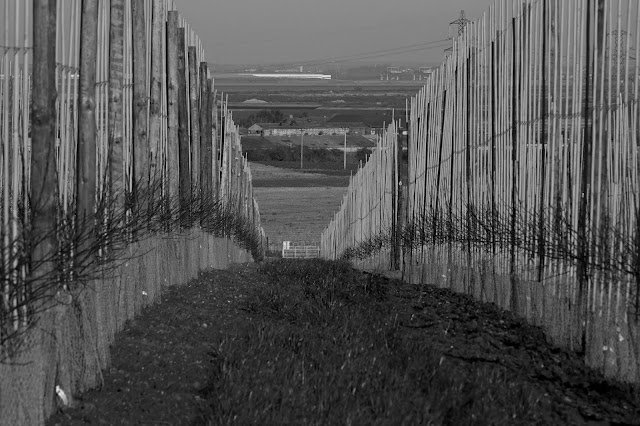 This last field was ex-Oilseed and two male Corn Buntings were jangling away although given the Alders around the edge of this field too, I suspect that it was also be fruit trees before long and the next Oilseed field to the east was similarly surround by this fence of trees so I think that is going too which of course meant that it was the best bird field that I saw all day with plenty of Skylarks and Meadow Pipits and the odd Reed Bunting. A fine male British Stonechat popped up almost in the garden of the Red House Dog Kennels. He even came closer and no cars came along as I snapped off a few shots. 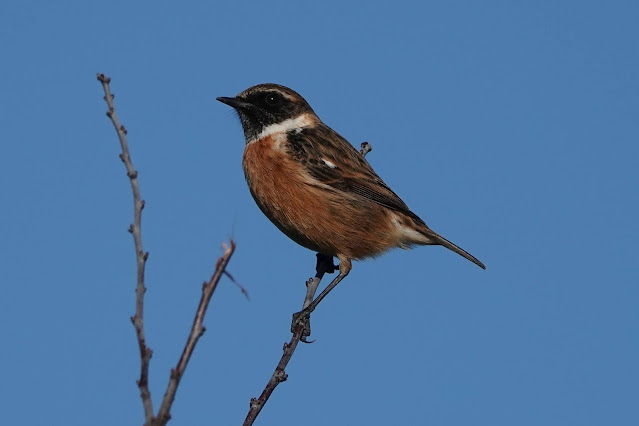 From here I road walked towards Lower Higham with the sound of singing Skylarks all around me. It is a pity I did not get out this far last spring. A Green Woodpecker called from some paddocks and bounded into the mature roadside Alders that were devoid of Siskins and a female Kestrel was, like the Buzzard, watching for worms from the fence. 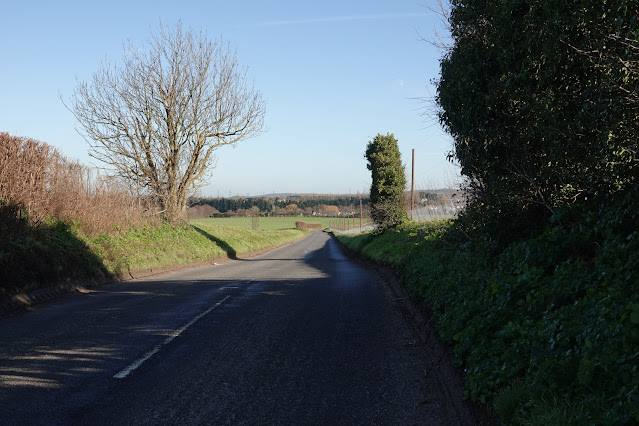 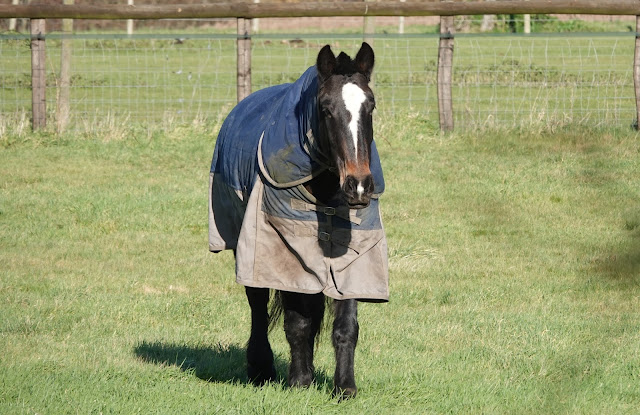 I followed Taylors Lane back uphill which gave even better views out over the North Kent Marshes before cutting across to School Lane and into the familiar territory of the fields east of Higham where I had the Corn Buntings previously. 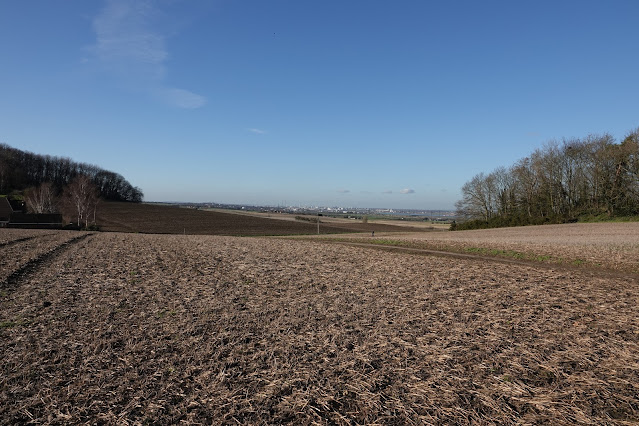 The back gardens here all sort of have an allotment at the bottom of the garden and there have always been large gatherings of Starlings here and today was no exception with hundreds loafing about and engaging in a wondrous cacophony of warbles, trills, whistle and mimics.  I recorded them in action... it’s magical.

I cut across the field past the isolated allotments in the middle where the Sparrows were congregated as usual and although I could see and hear Skylarks, Linnets were the only other small birds around and perhaps the Corn Buntings were further down the field complex as I cut up this time (after coffee number two) to Hermitage Lane.

A Mistle Thrush was defending a Holly noisily and there was a fine view all the way out to the bridge onto Sheppey as I descended the path between the two big houses back towards home. It was very quiet and there was even frost still lingering in the shade as I slid my way through the mud back up to Dillywood Lane and across the A289 where Pigeons were in love. 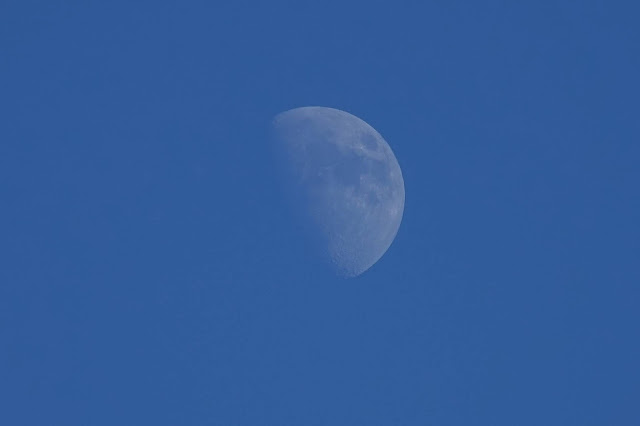 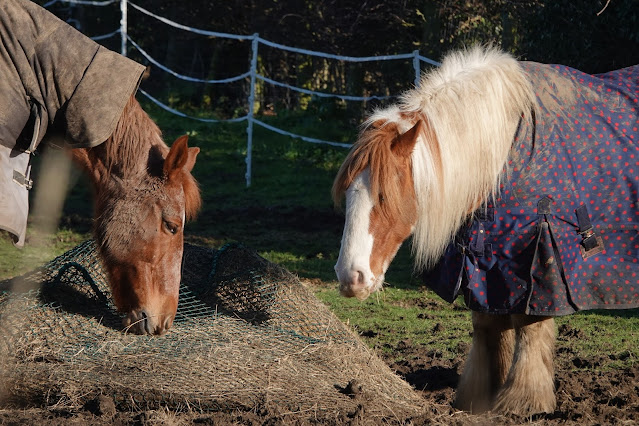 So as not to duplicate my walk on Monday I cut through to the tunnel footpath that would lead me through the orchards and across the fields back to Brompton Farm Road and the downhill journey back home from here.  There was quite literally not a bird on the whole stretch before I hit that road which was disappointing but I had made the most of the first proper, cold, blue, sunny day this year so I was happy all the same especially as a female Sparrowhawk cruised over almost as I got to my front door. 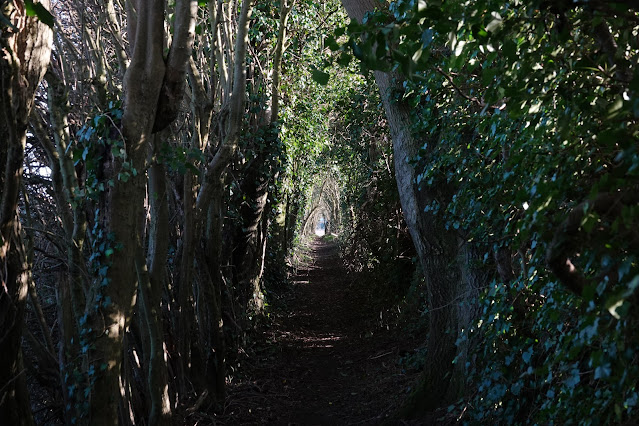 As I opened it a little moth flew up which was quickly potted, a picture take and sent it to Antony W who swiftly identified it as Endrosis sarcitrella - my first flying moth of the year. 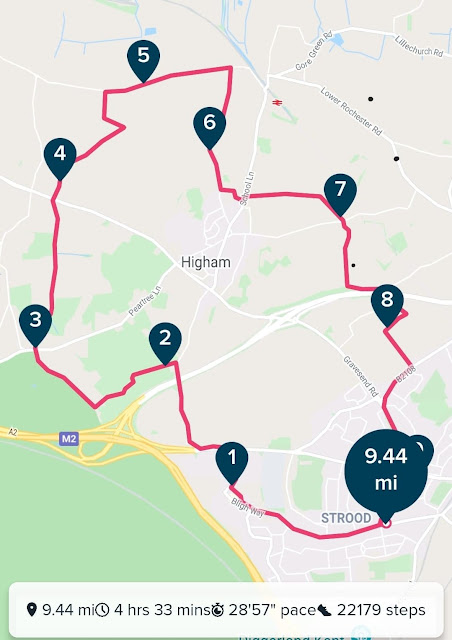