I pottered out before sunrise and ambled down to the sea after Sol had just surfaced. It was calm, warm and quiet other than the phut phut sound of the little fishing boat offshore laying his nets and the Eastern Olies cycling in the tamerisks. 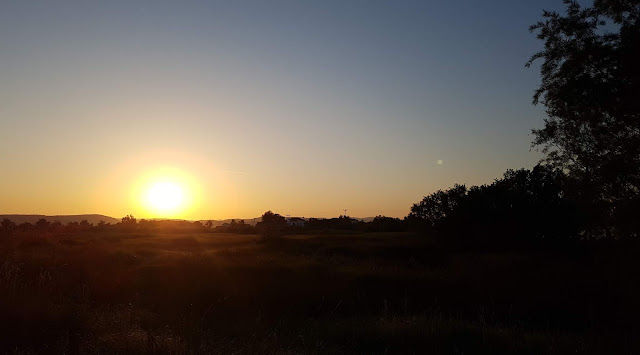 A full day out west was called for and we set off on the anticlockwise circuit with a first proper stop at the three laybys in Lardia which gave my party the desired cobalt Blue Rock Thrush, triangular Rock Sparrows, chittering Crag Martins and trilling Eastern Bonelli's Warblers with the added bonus of Red-rumped Swallows, a male Goshawk and Sombre Tit. Nightingales, Blackbirds and Levant Green Frogs provided a constant aural backdrop.

Another short stop for Woodlarks just after Vatoussa gave us the first 17 Bee-eaters of the trip and the Isabelline Wheatears were buzzing nicely at the layby with the usual suspects for company while ten Alpine and three Pallid Swifts headed north and a Golden Oriole sang from the oaks below. Cinereous Buntings were singing but proved very difficult to find until I stopped searching the rocks and checked the telegraph wires!

With calm conditions we circled Ipsilou but a Chiffchaff was the only migrant. However, it was by no means birdless with eight Cinereous Buntings singing from the fresh green turkey oaks along with displaying Black-eared and Northern Wheatears, tail flashing Eastern Orphean Warblers. Masked and Woodchat Shrikes chattering from treetops and Blue Rock Thrush, Cirl Bunting and Woodlark were encountered. 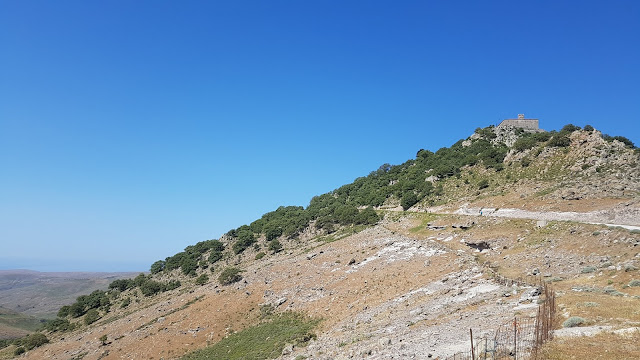 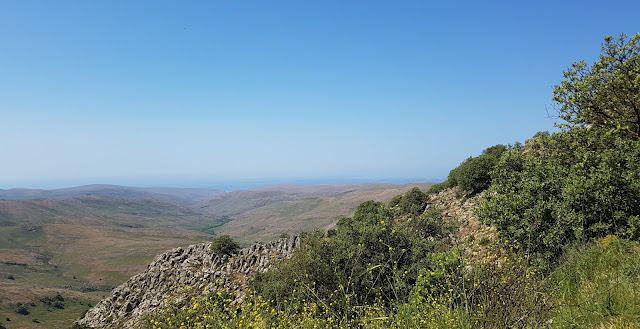 Butterflies were everywhere and Violet Carpenter Bees thrummed between blooms. The local Ravens kronked at the Buzzards and an Eleonora's Falcon cruised by. We finished the circuit with another obliging Woodlark and a smart Cretzschmar's Bunting before an entertaining ten minutes spent in conversation with a couple of invisible Golden Orioles.

From here we headed down to a very quiet Sigri and Faneromeni which provided us with another singing Oriole, two Collared Flycatchers and singles of Pied and Spotted. Flavas zipped around and we picked up a couple of Black-headed Buntings and a fine male Red-backed amongst numerous Woodchats while two Tree Pipits added themselves to the list.


A party of 24 Bee-eaters over the upper ford would turn out to be the last we saw all week.
Both Shearwaters were offshore albeit hazy and Marsh Harrier, Short-toed Eagle and Lesser Kestrel were all seen before we hit the track to Eresos.

Whinchats were the predominant migrant along with another two Red-backed Shrikes, Pied Flys and a single Blackcap. A Purple Heron was seen at Meladia as well as another immature Pallid Harrier and a superb pair of Short-toed Eagles. Cretzschmar's eventually showed well, Rock Nuthatches flicked across the track and two Black-headed Buntings sang from the wires.


The rest of the drive back was swiftly undertaken before our first lovely dinner at the Dionysis... Dave and Margaret were over the moon with about 130 species and at least 50 new ones in the first three days.