Way back in the depths of last summer I promised Enid B that I would at some stage get to show her around some of the botanically and insect rich spots I had discovered on my north Kent lockdown rambles.  The weather had been conspiring in recent weeks to preclude any attempts to get her south of the river to see the Helleborines and such like but all came good on Monday morning and we met up to see what could be squeezed into the rain free window.

Our first spot was those dark Beech and Pine woods that I visited near Snodland a couple of weeks ago and I was confident that the  would still be flowering and I was not to be disappointed with plenty of new waxy blooms on Violet Helleborines on the spikes that were just getting started on my last visit. The light was as challenging as before but Enid’s smile lit up the woods.

It was not the longest of stops before we headed east to The Larches at Detling. Again, I was hoping that site specialities would still be in bloom.

The Yellow Bird’s Nests were mostly over but there were still some small ones pushing through the dark leaf litter like sickly yellow bent fingers.  Those that had finished were developing a single curious seed pod at the very top of the stalk.

From here we walked up into the wood and soon found my next target with numerous Broad-leaved Helleborines still with tightly packed flowers ranging from burgundy through pinks and almost lilacs to green.  Some were now fully going to seed and others still had a flowers at the top yet to open. 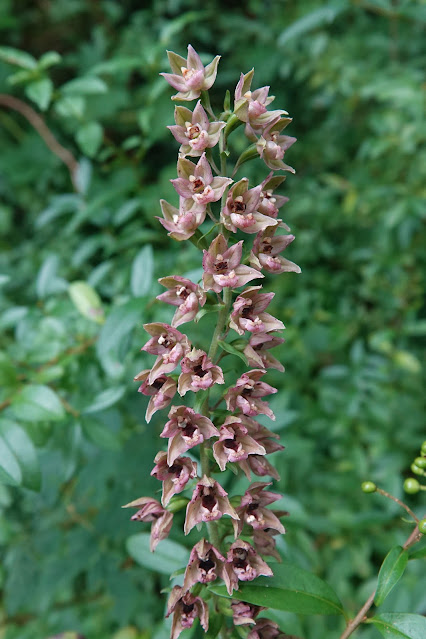 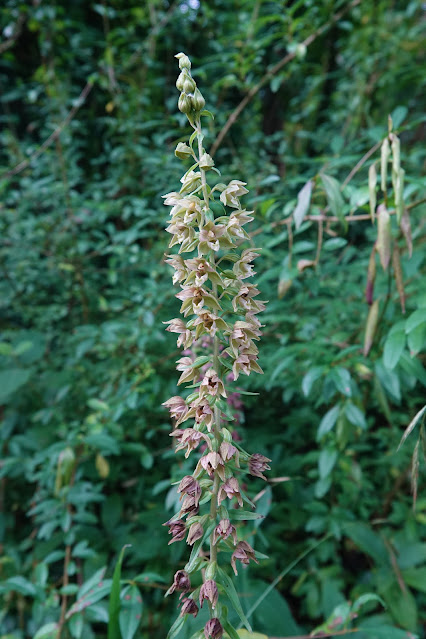 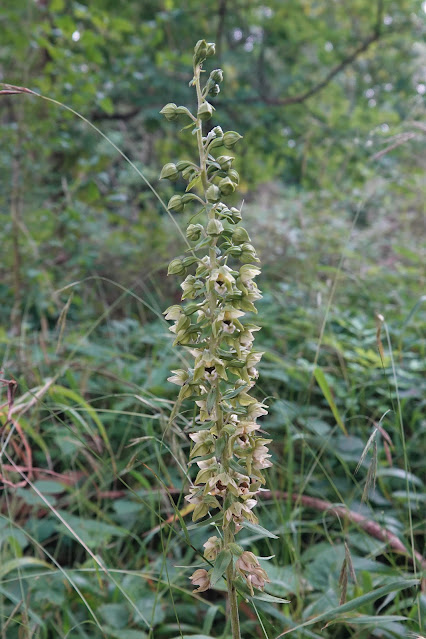 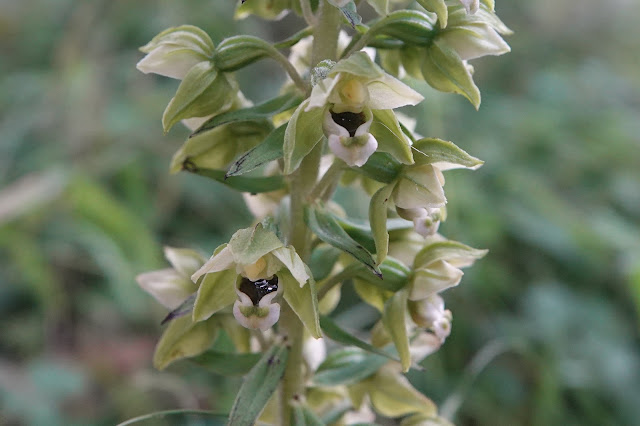 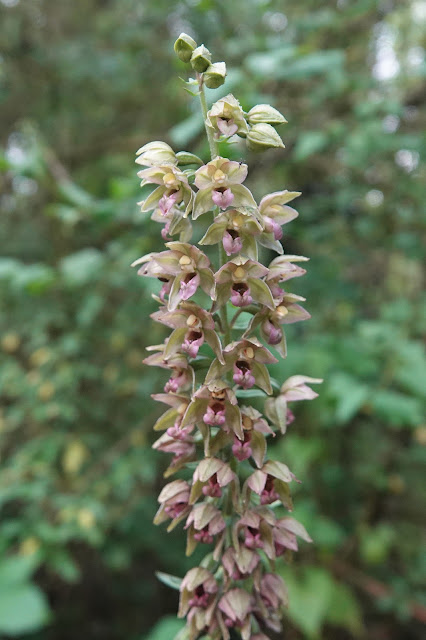 Ploughman’s Spikenard was found pathside and out in the meadow we found Milkwort, Blue Fleabane, various ‘yellow composites’, the usual culinary herbs and best of all several delightful Autumn Gentians with their little purple starry trumpets.  This was a new species for me and I did not know that they were at this site.

There were some lovely little clumps of Eyebright and Common Centaury and Carline Thistles were coming to the end.

Field, Meadow and Rufous Grasshoppers were found and amongst the Hovers were a Volucella pellucens and lots of Syritta pipiens. Garden Carpet and Silver Y moths moved up as we walked and I got some rubbish pics of the delightful micro called Euspilapteryx auroguttella that I saw with Antony W last summer here. 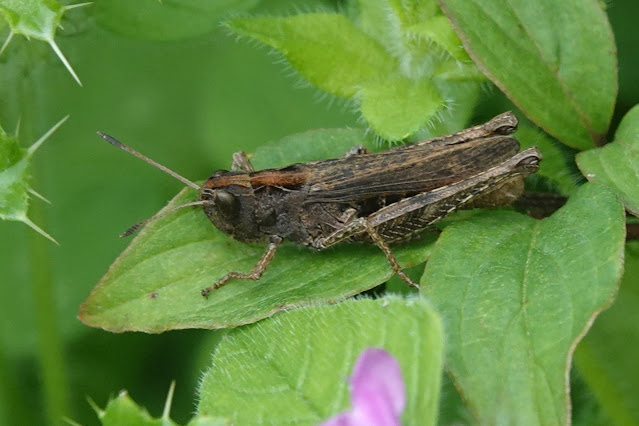 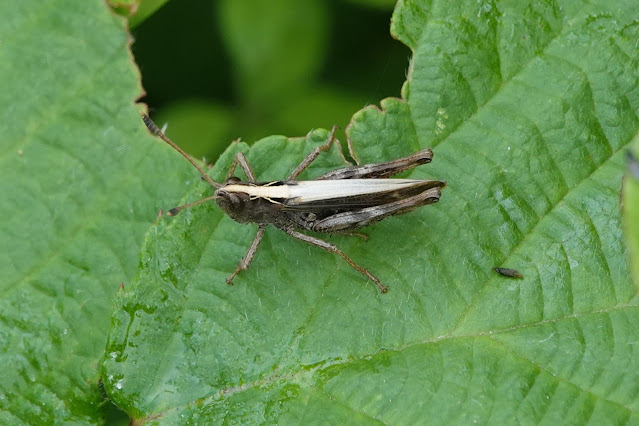 There were a few Bumbles and Lucerne Bugs (Adelphocoris lineolatus) and a magnificent White Spot Fungus Weevil (Platystomas albinus).  The latter seems to be a rare and localised species and was a very smart critter indeed. 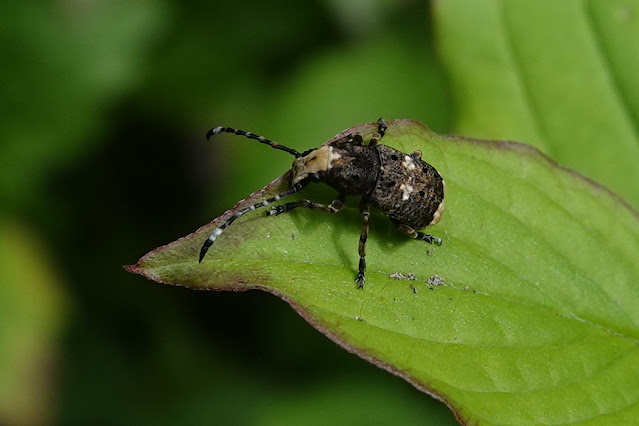 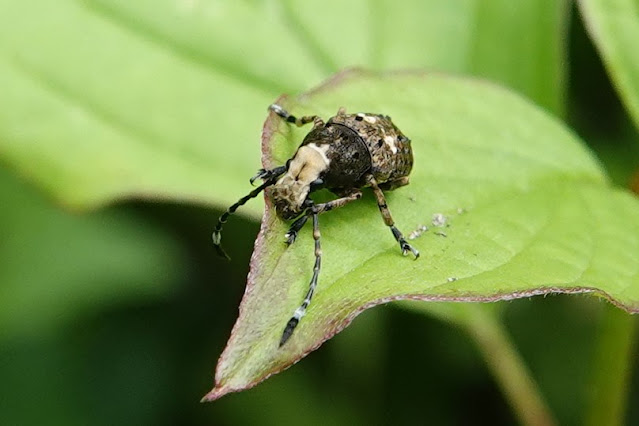 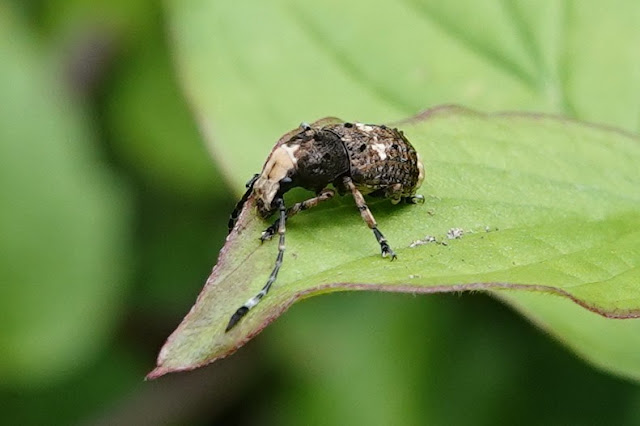 There were Land Winkles (Pomatias elegans) in the leaf litter and as usual most were empty but we both found a few live ones too for the first time.

Our last stop was Queendown Warren where I hoped to add a couple of Butterfliy species to Enid’s list.  The weather even brightened up and the sun poked through resulting in the spectacle of what I call The Shimmer where as if my magic the ground suddenly becomes a flickering scene of dancing Blues and Browns.  Chalkhills were still around with a few smart ones amongst those that had seen better days and several Adonis gleamed with brilliant electric blueness as they flexed their newly minted wings.

Common Blues and many Brown Argus were found and six Silver Spotted Skippers eventually gave a lovely views with some patient tracking. When a SSS wants to move it is off like it has a firework attached to it and keeping your eye on it is somewhat tricky.


Equally fresh were a deep orange Painted Lady and bold Red Admirals and Brimstones were every bit the eternal butter fly on lemon wings.


Checking the Wild Carrot patch was very productive with two new self-found Hoverflies for me with Cheilosia bergenstammi which feel like a chunky, hairy eyed C soror and the dapper Melangyna compositarum / labiatarum of which the two species (if they are) are inseparable.  There were plenty of other Hovers with Chrysotoxum festivum, Rhingia rostrata, two Volucella and five Eristalis amongst others.


Two Rutpela maculata were my first in some time and I once again found Melitta tricincta but at least I knew to look for this grey little bee around the Red Bartsia this time which is where I found them. Silver Y, Onocera semirubella and Pyrausta purpuralis, aurata and despicata represented the day flying moths bit I was surprised to see a late Six Spot Burnet too.

The four Grasshopper species were all seen although as usual the Stripe Winged were less than obliging and Tortoise Bug and Harlequin Ladybird were also found as we grubbed our way around the site.

Being a botanist first and foremost meant that there had to be some quality plants too and the display of Small Scabious was particularly fine along with a new Bedstraw whose name escapes me and so many Autumn Ladies Tresses that there were not enough ‘don’t step on me’ feathers to highlight to the careless of foot. 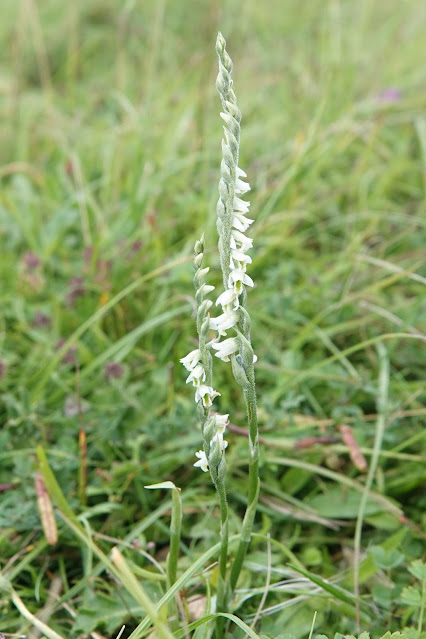 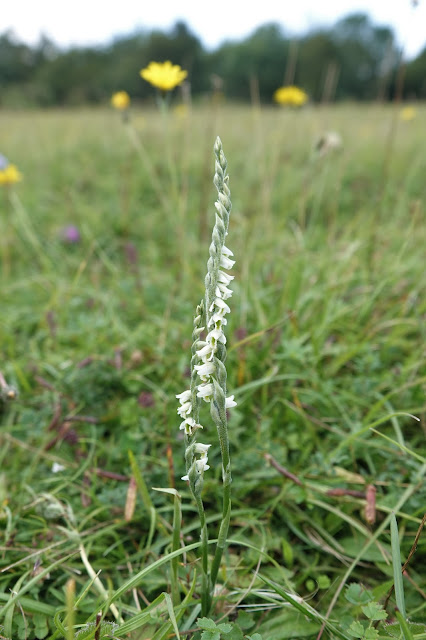 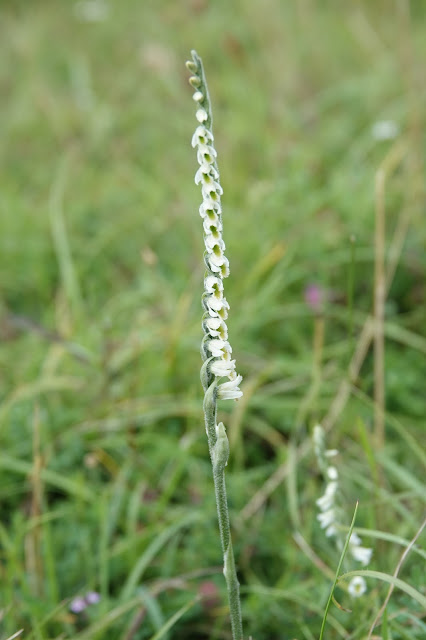