On Monday I made my way north of the Thames to have a poke around some more of the Bulphan Fen farmland to give me more of an idea of what to expect once the farmers are on board.

Footpaths are few and far between and I chose my ingress point off the main road through West Horndon only to find Footpath 4 pointing directly at a shimmering golden Wheat field so I tried further along and found Footpath 8 from within the houses.

It took me south through a couple of ploughed fields to start with that had many loafing gulls but the edges were and ditches for the first half a mile were mercilessly mown and even the ditches and up under the sparse hedges had been scalped.  There was very little wildlife at all with just a few Meadow Browns, a couple of singing Yellowhammers and a family of Green Woodpeckers but thing improved once I got beyond Field House and crossed a swishing Barley Field. 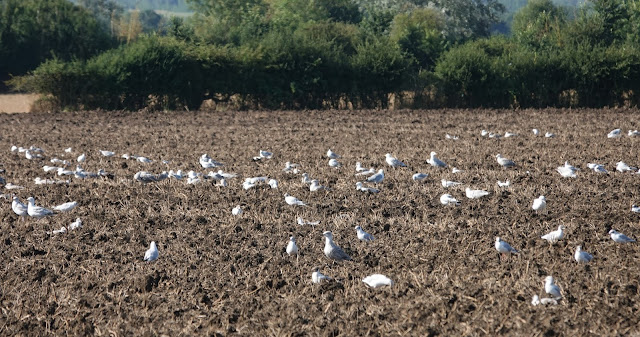 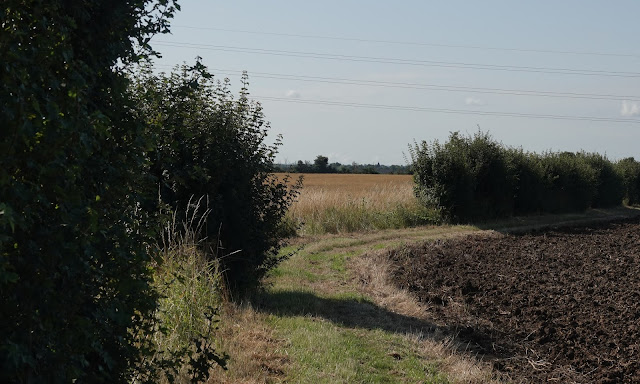 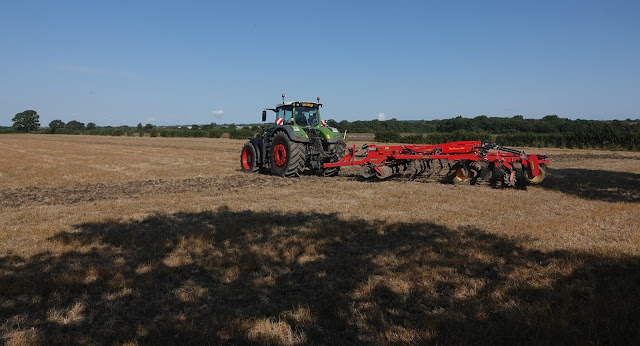 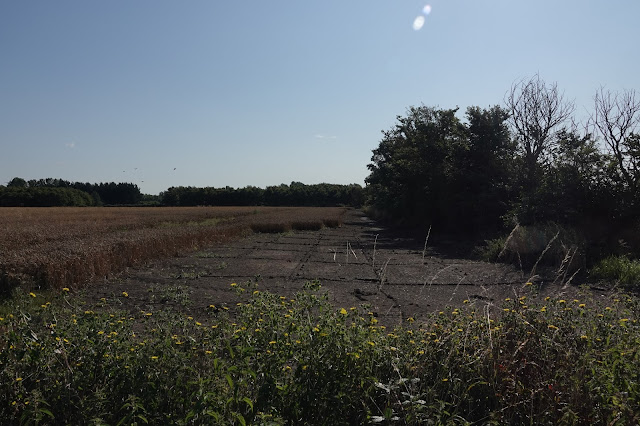 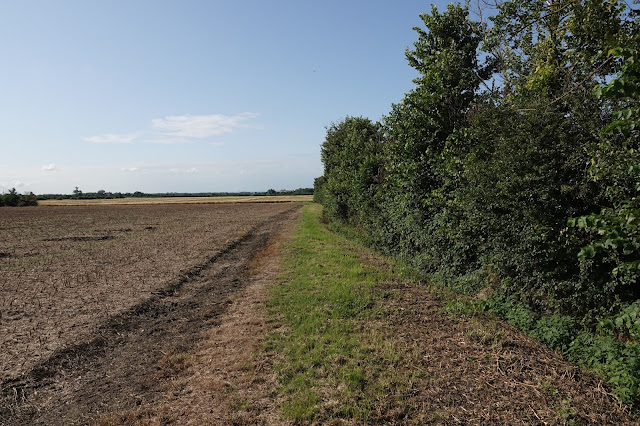 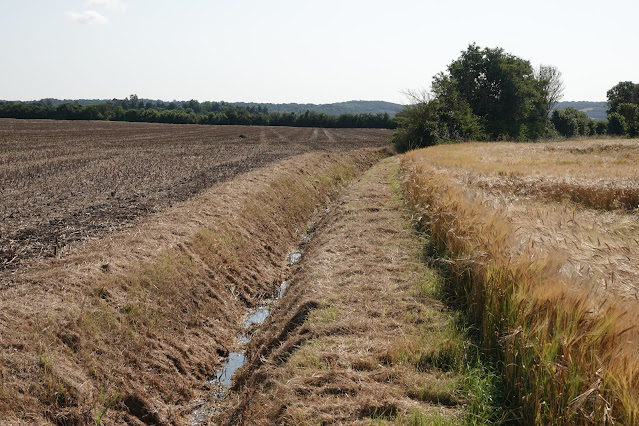 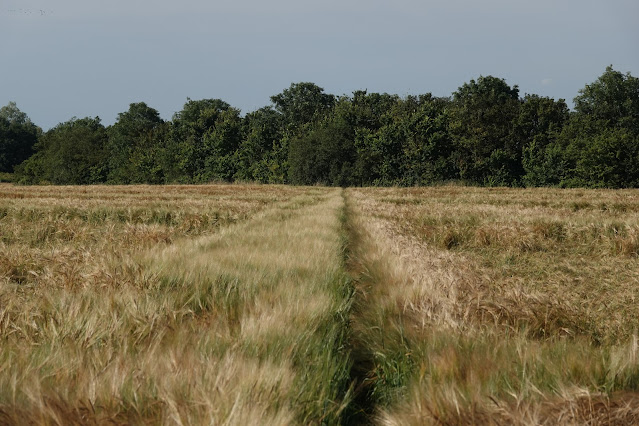 This next section had a tributary of the Mardyke running alongside it and was deep and lush and probably a bit overgrown but was bordered by a fine grassy herbal margin and an on off thick hedge.  As such there was so much more insect life with Meadow Browns, Gatekeepers, Whites, Peacocks and Red Admirals and both Common Blue and Brown Argus.  Sphaerophoria and Episyrphus balteatus were the two common Hovers an there were few Bumbles and Honey Bees too on the Ox Tongue, Water Mint, Teasels and Great Willowherb.

A Long-tailed Tit family and several Whitethroats and Blackcaps moved ahead of me as I approached the big Willows surrounding the fishing lake at Slough House.  I did not try to gain entry but hopefully I may be able to do so in the future via a friend who has access.  He saw three young Cuckoos along the back edge the following day that must have fledged almost at the same time.

The invisible lake was bordered by the aforementioned willows but then by an amazing buffer strip of Nettles, Thistles and Ox Tongue that must have been 20m wide on three sides.  It was alive with insects with many more Butterflies, Bees and Hovers and a few Migrant Hawkers and Darters.


The old barn tucked among the modern ones had Barn Owl pellets so that bodes well too.  I continued down China Lane a ways before cutting through a Wheat field (with a path) to Footpath 142 where I crossed the sluggish Mardyke.

A male Banded Demoiselle posed for me but I think it was too choked for Scarce Chaser that I had seen about a mile downstream.  The adjacent field was a sea of yellow Oxtongue with a couple of old Oaks stationed in the middle.  Four more male Yellowhammers were in song and trekked back north where the grassy margins had more Meadow Browns and a single Marbled White. 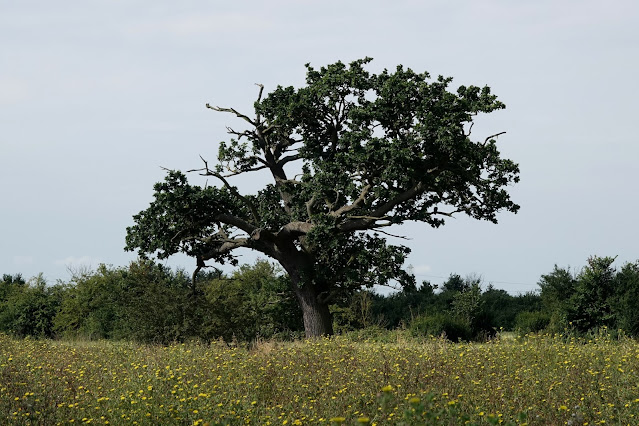 The Mar Dyke veered away from me again as I headed back up to West Horndon pausing only to have a good look at a raised carp lake near Tillingham Hall that looked very welcoming with its Lesser Reedmace and Phragmites margins with Water Mint, Sedges, Fleabane and Gypsywort.  However to my surprise I only saw two brief Emperors and no Damsels and not a single bird. 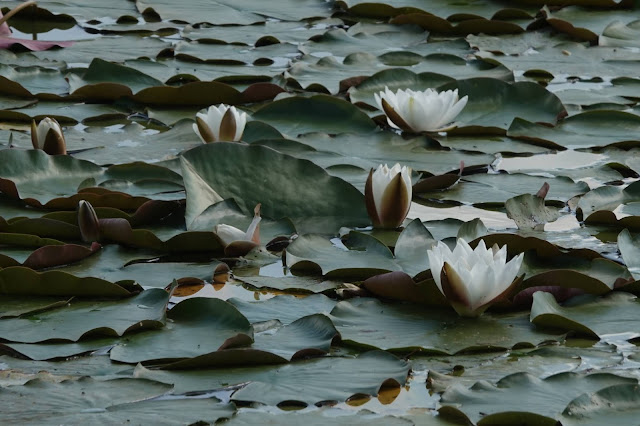 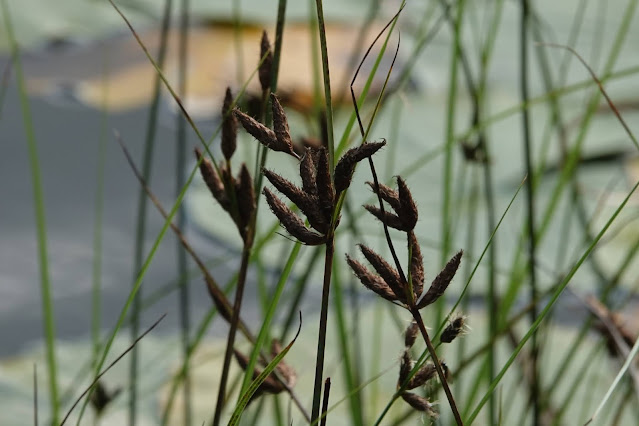 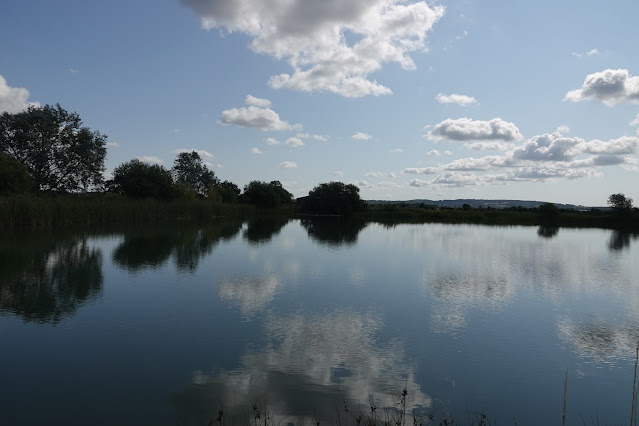 From here I headed up to the A127 and then down onto Canvey for a play in the famous Dragonfly Ditch.  I did not take long to get there and I was soon in amongst the Blue Eyed Hawker action.  In fact I only walked a couple of hundred metres of the ditch and still saw 17 male and three female BEHs while countless Scarce Emeralds (Robust Spreadwings as we call them in Lesvos)  and a couple of Commons were seen in the sedges.  I did not look too hard for Southerns this time though.

I spent my time trying for flight shots of the male Blue Eyes and was pleasantly surprised but the results once again.  They truly are a stunning Dragon and it is wonderful that they now part of our Thameside insect fauna. 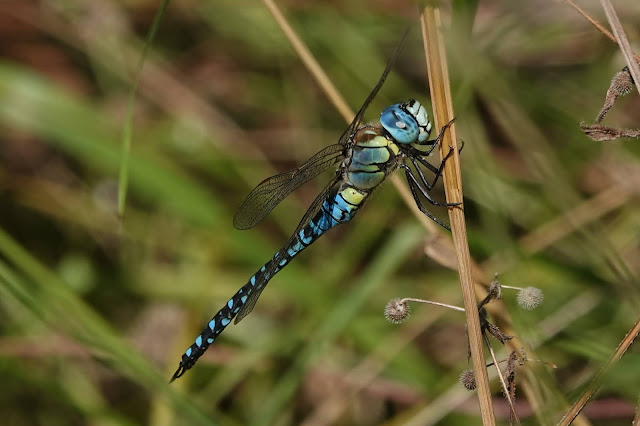 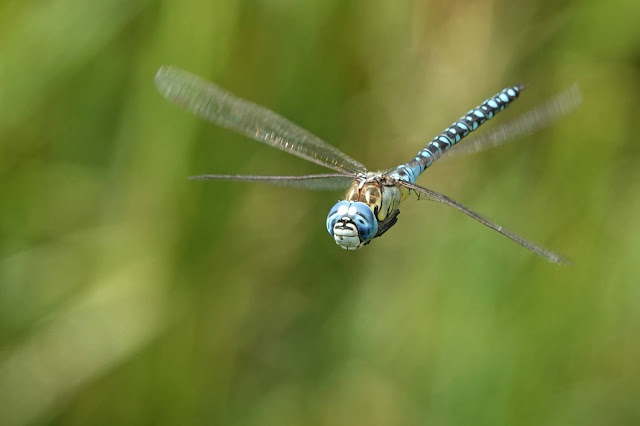 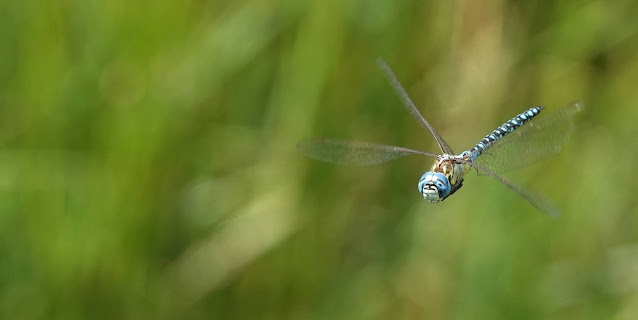 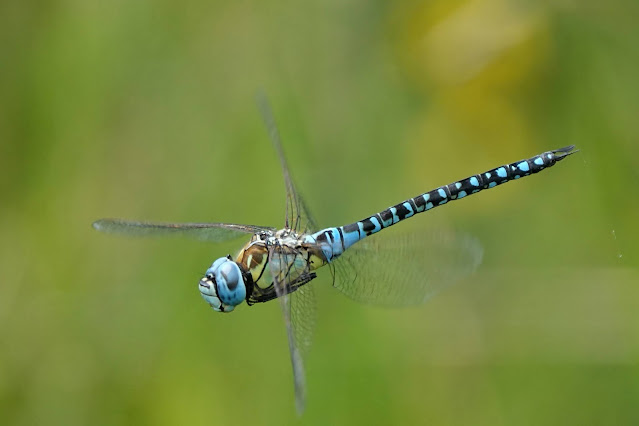 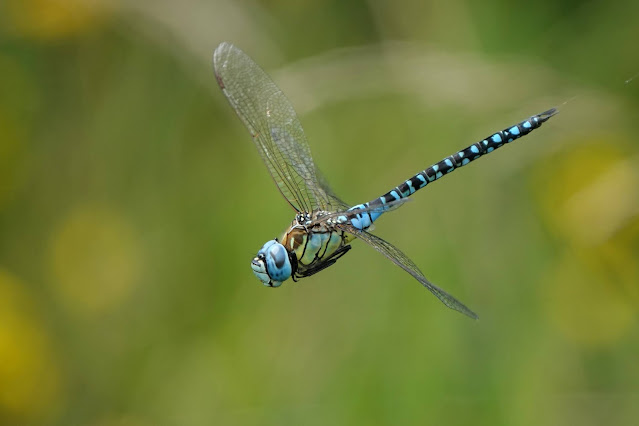 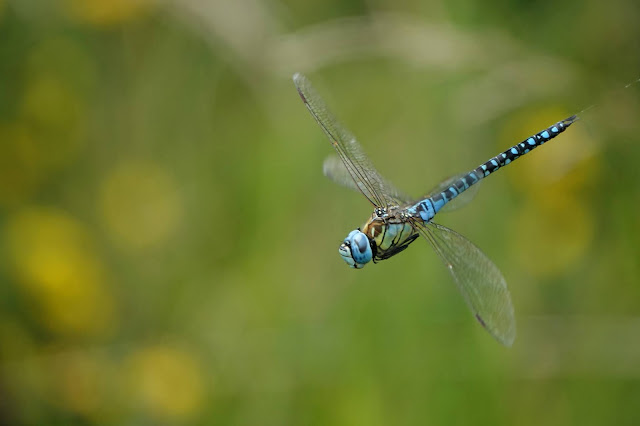 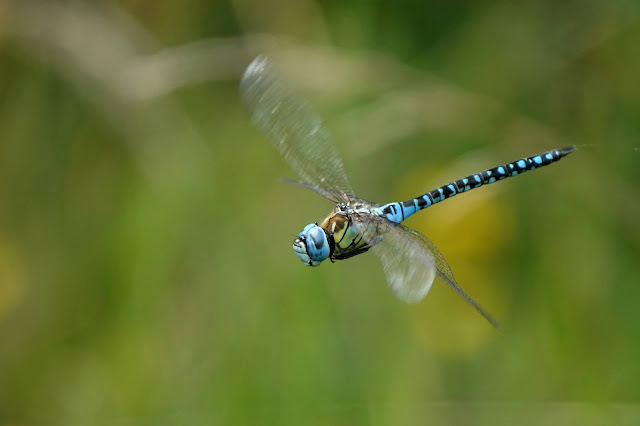 The Clegs were not much of a problem and after a fairly close encounter with the inquisitive cow herd I decided to amble back passing a couple of Six Spot Burnets on the Teasels on the way as well as my first Lesser Marsh Grasshoppers of the year amongst Field and Meadow.

From here it was time for a lunch pick up and then onto Canvey Wick where amazingly, as usual I bumped into Richard Stanley and the litter crew.  It does not matter which RSPB site I visit down here, Richard always seems to be where I chose to go and after chewing the fat I pottered off around this most strange of places. 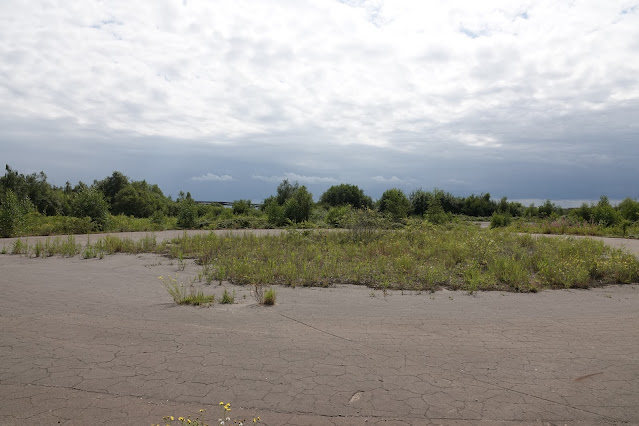 As usual the visit was insect centric with plenty of Hover action with a couple of tiny Paragus, Chrysotoxum festivum and Eristalinus sepulchralis the pick and amongst the Hymenoptera there were some feisty Bee Wolves which allowed me the chance of some more aerial shots, Anthophora bimaculata, Dasypoda hirtipes and Cerceris rybyensis.  I saw quite a few other small species, especially on the sandy area but I really do need someone to guide me in the field with bees and I am lost for the most part as to where to start. 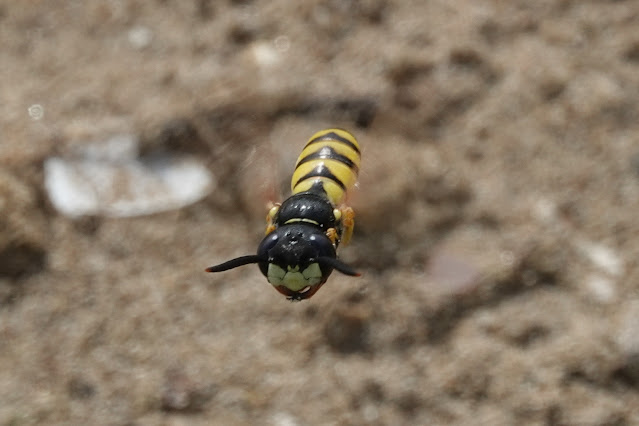 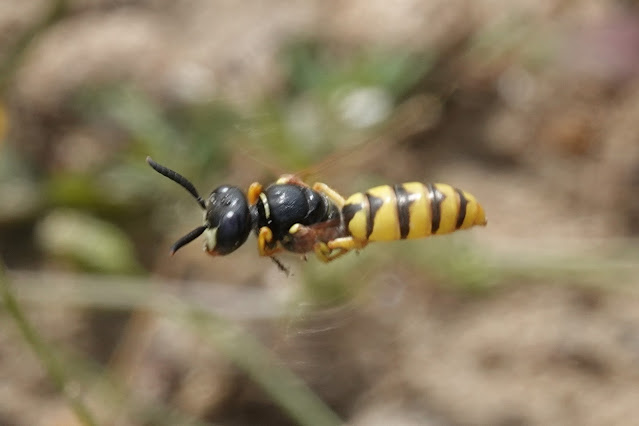 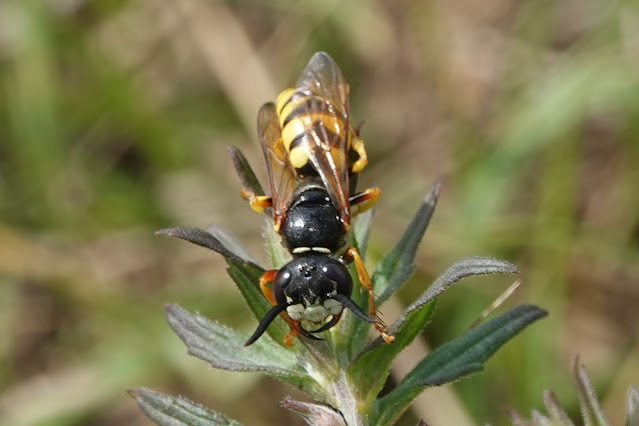 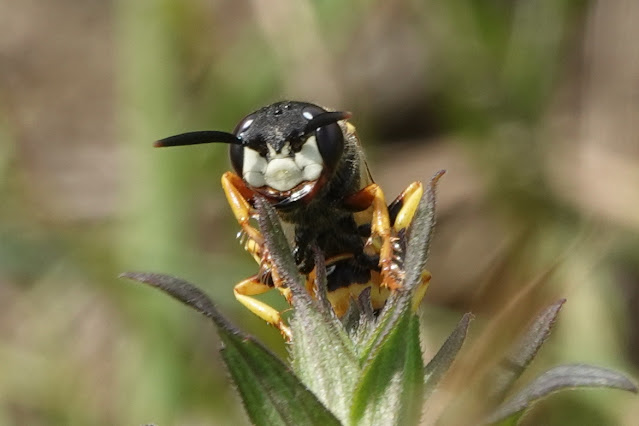 There were a few Butterflies and Silver Ys, a beady eyed Onocera semirubella along with Six spot Burnets on the Marjoram.  The only big Dragonflies that I saw were Migrant Hawkers.

Young Sparrowhawks could be heard whining from the Birches and the sound of Curlews drifted up from Holehaven Creek.

With the clouds scooting in from the south west and the temperature dropping I cut my losses for the day.