Despite a short runway delay at Stanstead, our breakfast time flight made good time and most of Europe seemed cloudless below us as we headed south east.  The Eastern Alps in Austria (east of Saltzburg if I recall correctly) were particularly spectacular with snowy high peaks before the views became more parched and when I next looked out the window there was the Greek coast below and the huge coastal reserve of the Nestos Delta.  The island of Samothraki came up next with its spur like headland and then countless ships and tankers dotted the Aegean in a snaky line heading up the Turkish Daranelles towards Istanbul. I am always captivated by the aerial view of the world I have not visited.  Our flight even conveniently circled the south west side of Lesvos giving a magical view of familiar sites over Skala Kallonis on our own personal 3D Jet2 map.

After a trouble free landing and a speedy navigation of firstly customs and then Mitilini it was time for a beer with Thekla at the Pela before a pre lunch-dinner circuit of the Lotzaria Triangle.

It was hot and dry but as usual the drying and still irrigated alfalfa fields were alive with birds. All four Shrikes were seen with twos of the trio of scarcer species - Masked, Woodchat and Lesser Grey and nine Red-backed including an adult male. Northern Wheatears, Whinchats, Romanian Blue and Black-headed Wagtails dotted the fields with 12 sleek Tawny Pipits, two Tree Pipits, a male Stonechat, a few Willow Warblers in green and yellow and a multitude of Corn Buntings, House and Spanish Sparrows. A couple of Whitethroats flicked ahead, two Spotted Flycatchers did what they do best and Crested Larks grovelled.


I was to learn quite quickly just how awkward the shimmering heat haze was to make photography and even close subject could waiver in and out of focus between shots.

As with most autumn visits, Hooded Crows were patrolling in gangs and chased off a Common Buzzard while the Long-legged was on his pole and a Short-toed Eagle hovered while a juvenile male Goshawk was a pleasant surprise and almost where I saw one last September.

Two Buntings down by the Lower Tsiknias Ford puzzled me as I was expecting Ortolan but both were Cretzschmar's with the combination of rusty rump, slight grey head cast and orange in the sub-moustachial and vivid white eye rings suggesting the latter. I have only seen spring birds before so a bit of an education seeing them in this mid-way plumage.

There was plenty of water down stream and some up and there were three Greenshank, Little and Great White Egrets fishing and a few more flava Wagtails while down at the river mouth there were both Cormorants and Shags and 31 Sandwich Terns which I think is the biggest group I have seen here. Four hirundine species flicked around in small numbers but there were no Bee-eaters...yet.

After a mammoth Chicken Club Sandwich, a Kalloni Salt Pans circuit was made just as the sun went down. The breeze was up but the light was good and I saw two adult White Winged Black Terns being pursued by a stocky male Peregrine, four Stone-curlews, two Common Curlews, a Black Stork, an adult Slender Billed Gull, a few other waders that included Wood Sandpiper and a single Black-winged Stilt and some young Flamingos in the Channel.   Bats emerged en masse and zipped and jinked around. They were everywhere and so close you could see pointy tails and sticky up ears on both species seen. The bump back through the middle had one more treat in store with a female Nightjar flying through the lights and silhouetted against the last of the orange sky. I have heard them here before but never seen one. 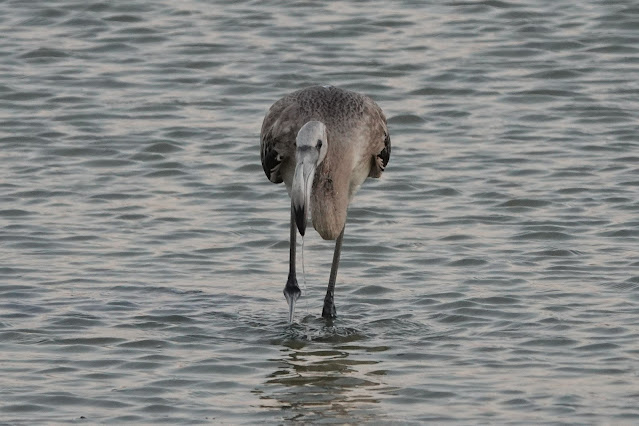 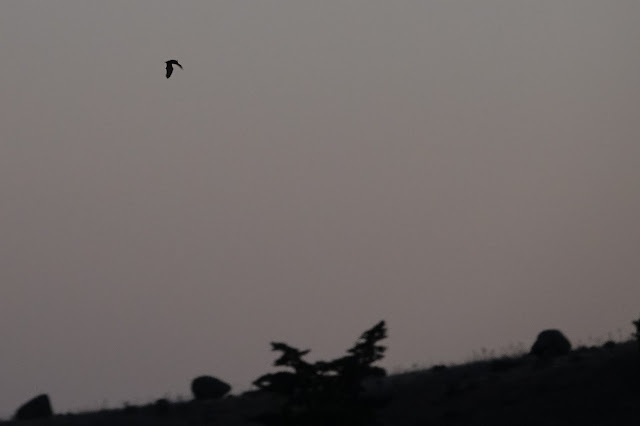 Time for another beer and the expected sound of the local Barn Owl flying through the gardens...