No super early start for the first morning but after breakfast it was back out into Lotzaria. Bee-eaters were heard and seen in the first poplars before the Tsiknias and down at the river mouth there were singles of Curlew, Kentish Plover, Grey Plover, Dunlin and Greenshank and seven Slender-billed Gulls. The immaculate juvenile Long-legged Buzzard appeared overhead and was quite strikingly Rough-legged like is plumage pattern and shape.

We headed up river towards the Ford where a Great White Egret lurked and two Common Swifts came through with some Red-rumped Swallows. Turning left at the Ford junction brought me back through the middle towards Papiana. 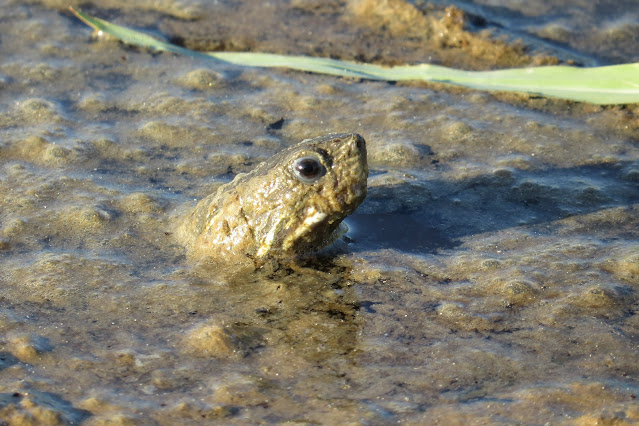 There were a few more Shrikes and Spotted Flycatchers and Bee-eaters were on the wires but there was no sign of Pia's juvenile Roller. A splendid Short-toed Eagle perched up and both adult Long-legged Buzzards. Up above three Black Storks circled.

Rough Cocklebur was fruiting well and there were patches of Thorn Apple too but the white trumpets had already closed up.  There were a few Blues flitting around the Brambles and Chaste Trees and most fence tops had the Bindweed-like leaved Cynanchum acutum scrambling along it.


A pop back to the Pela for a coffee and then off to Parakila to check the Turpentine trees on the way to the little harbour. Not much fruit this year but still a few Lesser and Common Whitethroats and at least six Eastern Black-eared Wheatears and ten Northerns. The males of both species were looking superb in their fresh autumn plumages. 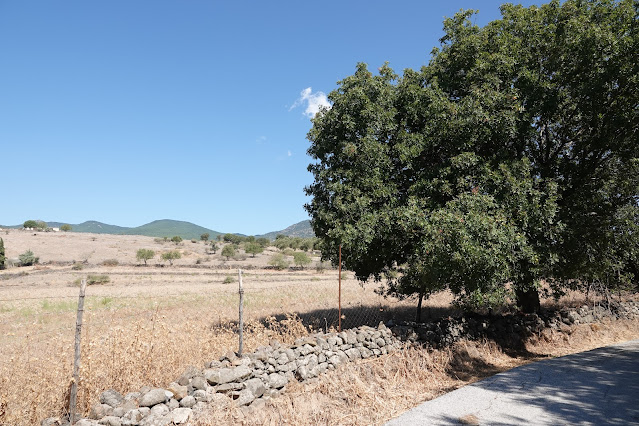 Middle Spotted Woodpeckers were vocal from the Olives and there were a few Shrikes and distant calling Rock Nuthatches.  There were 12 Med Gulls down at the harbour and a Black Stork dropped into the marsh.

From here it was back to Metochi for a circuit. The channels were bone dry but the lake was still mostly water and had Common Sandpiper and Greenshank and one Black Stork with four Grey Herons.


The fields were alive with flava Wagtails and a couple of Tree Pipits and an immature female Marsh Harrier was persistently quartering the same meadows and causing havoc.  Juvenile Masked and Woodchats were seen with the former preferring to site just under the lowest olive canopy.


Lunch was taken in the shade with Bee-eaters for company and Black Storks, Long-legged Buzzards, Ravens and Short-toed Eagles circled in the blue. 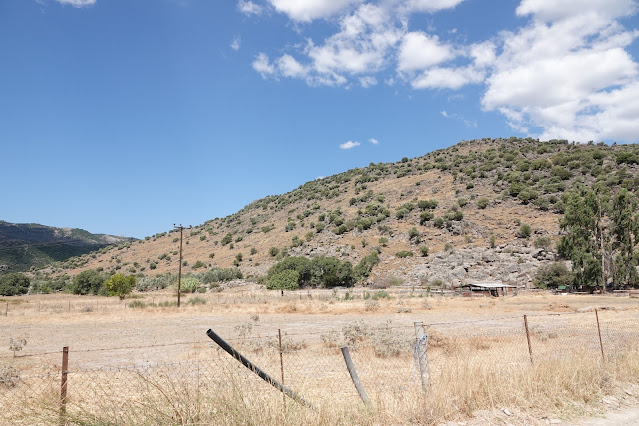 It was getting too hot so there was one more stop before a return to the Pela. Kerami Reservoir up Potamia held Pelicans last year but today I was just as happy with 16 Little Grebe, 14 Coot and Mallard, nine Teal and three Garganey. Violet Dropwings and Red-veined Darters were around the edges and two Hoopoe performed in the groves along with Chaffinches and Cirl Buntings.

Back at the hotel a Quail sang briefly in the field behind and I could hear Japanese Quails and see the Crowned Crane in its enclosure to the left and the Peacocks were making their weird bellowing that goes on all night.  A few Spanish Sparrows were poking around in the Palms.

A quick check of the brambles on the road produced Long-tailed Blues and Small Whites along with a cracking Potter Wasp with yellow eyes and a Anthidium type Bee that I have seen here before but as yet have not identified.


A pre-dinner bounce back down through Lotzaria added another Hoopoe, two Ortolans (almost where I had them last year), two Grey Wagtails in the sewage works, four Turtle Doves, the usual Shrikes, Chats and Wagtails and an elegant juvenile Montagu's Harrier near the Alykes Wetlands (which are of course dry).

Down at the Racetrack I could see four Curlew along the beach and out on the Eastern Pans the hulking grey shape of a Dalmatian Pelican, 12 Spoonbills and four Black Storks while Little Stint and Ruff were both new to the wader list. A Lesser Grey Shrike was on the wires as I drove back up the channel and it would still be there on the last morning too! 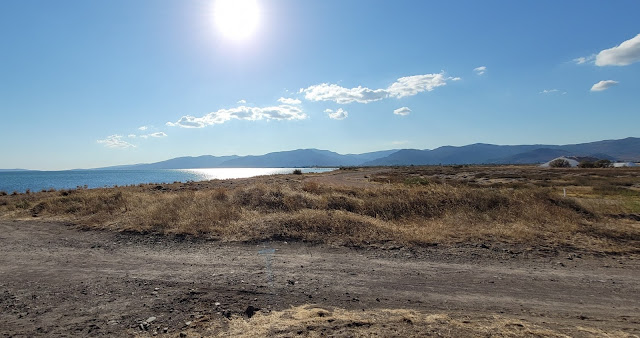 Dinner at the Dionysis was followed by a final after dark loop which added no night birds but resulted in a huge adult Antlion in the headlights and a rather plump Eastern Hedgehog.