I had intended on getting up early but that did not quite work out and as I lay there at 7.07am I saw a message from Pia about a Spur Winged Plover at the Tsiknias Lower Ford. Now, could I get there and back by breakfast at 7.30am? The answer was actually yes, to the minute and they had kindly stayed with the bird so as not to flush it by starting the car. It was quite happily feeding with the Grey Herons, Egrets and Black Storks but soon took off and flew low up the river. I am not sure how many autumn records there are but it was certainly a new September species for me. 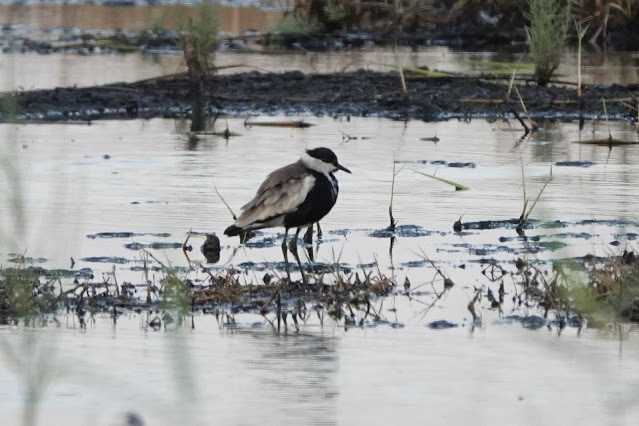 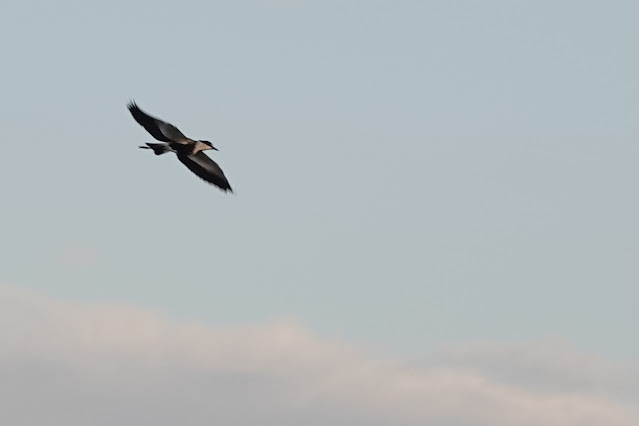 A relaxed breakfast and then back out through the middle where I showed an Israeli birder his first Bee-eaters with at least 80 overhead and on the wires and one of the Short-toed Eagles was on a telegraph pole. A large flock of mixed hirundines (mostly House Martins) and two Common Swifts drifted through with them. Four young Woodchats were in one spot and there seemed to be more Whinchats, Wheatears and Red-backed Shrikes around. 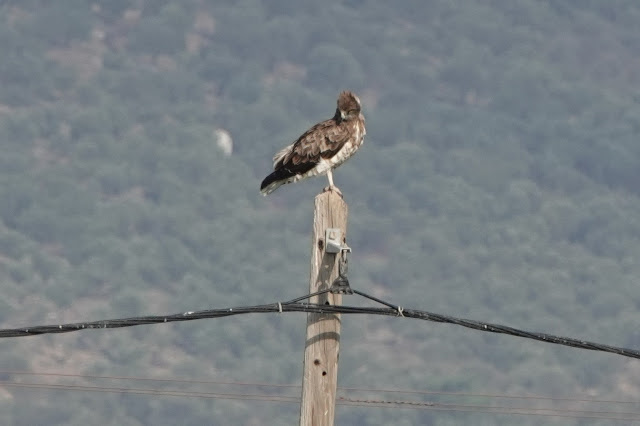 From here I headed for Achladeri in the hope of some Kruper's Nuthatch action. I stopped at the Vavouris river (?) to look for the Osprey but it was not there but upstream I found Sardinian Warbler, Lesser Whitethroat and several Spotted Flycatchers. 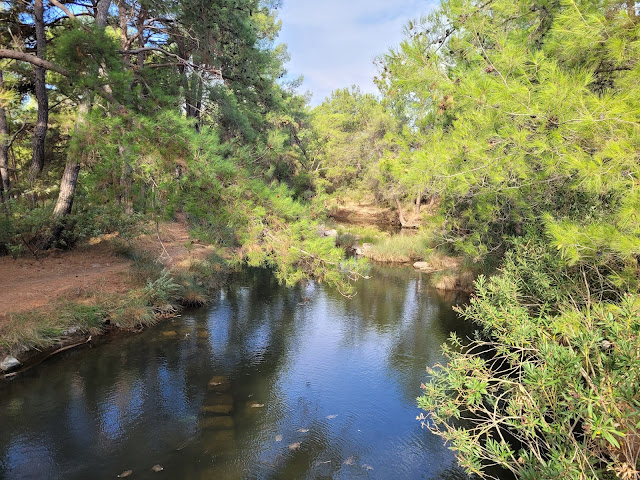 Achladeri itself felt quiet but by slow walking around I ended up doing very well with a good flock of Chaffinches, Greenfinches and Cirl Buntings along with Middle Spotted Woodpeckers and obliging Short-toed Treecreepers but of my target there was no sign initially until I heard a little Nuthatch chuckle and then the tell-tale tapping. I quickly found three Kruper's and had my best views since the autumn trip of 2016 as they diligently collected pine nuts and rammed them into crevices in the bark presumably as a winter hoard. 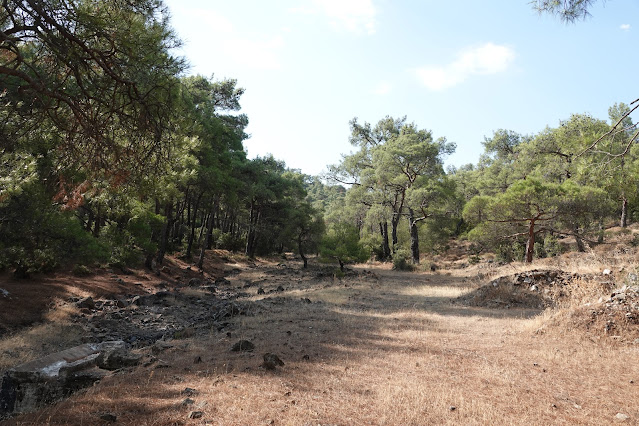 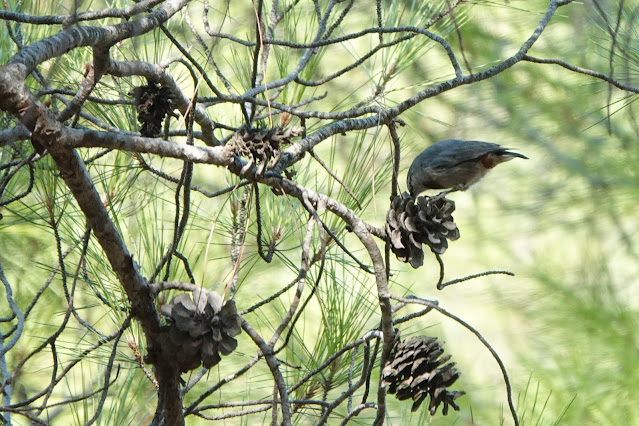 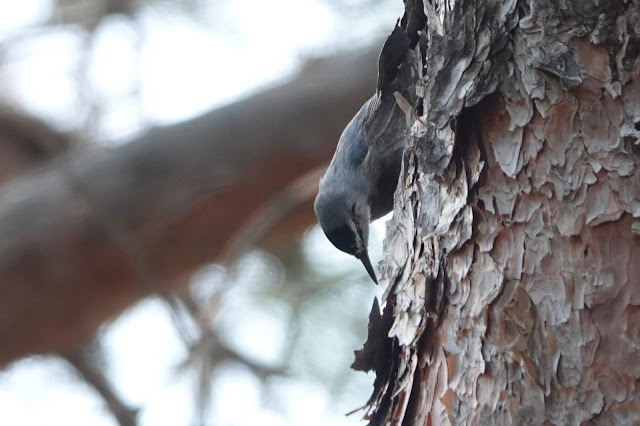 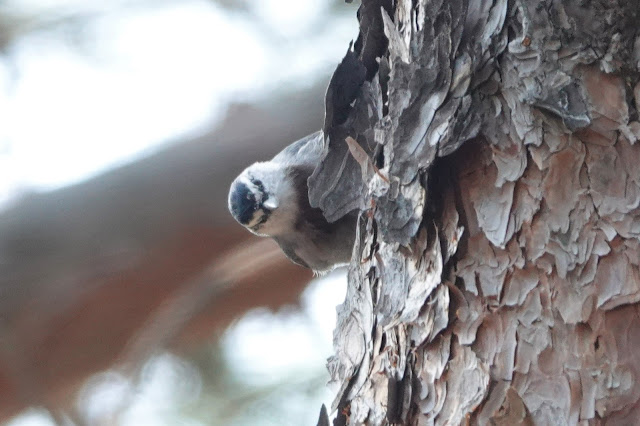 A Turtle Dove zipped through and I could hear Long-tailed Tits and as I walked back to the car the finch and tit flock in front panicked and fled for cover. I instinctively glanced up as young male Goshawk powered through.

From here we followed the sea side track all the way to Skala Vasilikon passing very little on the way bar 22 Med Gulls and two Shags around the little harbour and a few Jackdaws with Hoodies in the fields. The odd Shrike and Whinchat dotted the fences, Tawny Pipits and Crested Larks came up off the track side and 13 Bee-eaters were on the wires. 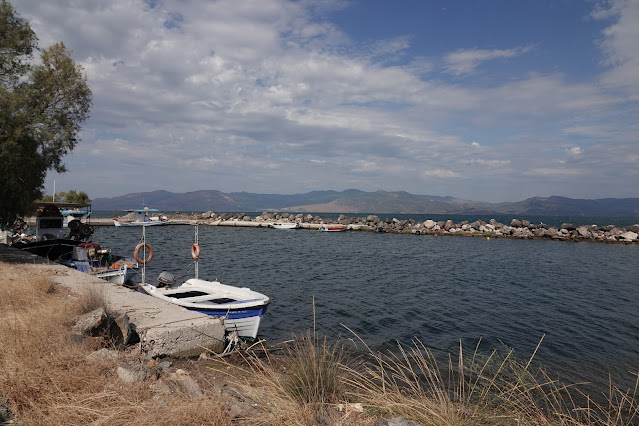 Down at the Polichinitos salt pans I counted 112 Flamingos, two Black Storks and a few waders including 11 Greenshank and three Little Stints. There were 55 Sandwich Terns roosting and on the posts with them were two fresh juvenile White Winged Black Terns and a juvenile Whiskered although that was slightly more advanced. This was the first time I had seen a non adult Whiskered. A juvenile Little Tern was also patrolling and was a useful comparison as I rarely see this age back home. Seven Slender-billed Gulls was following the Flamingos around. 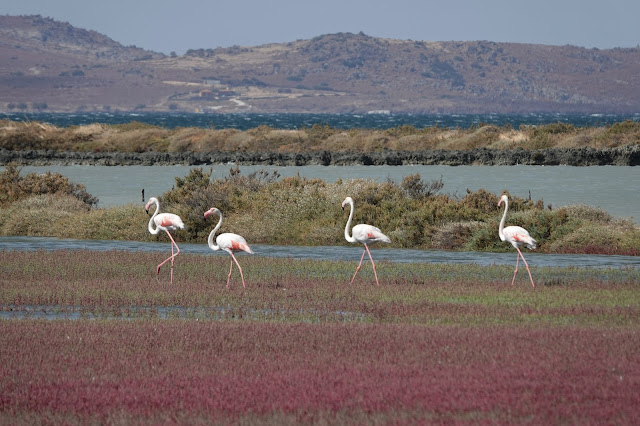 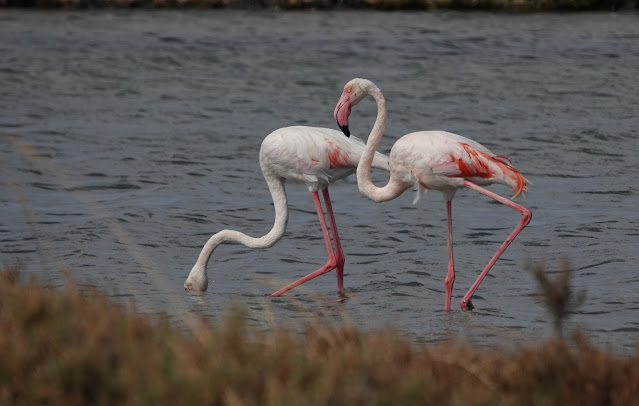 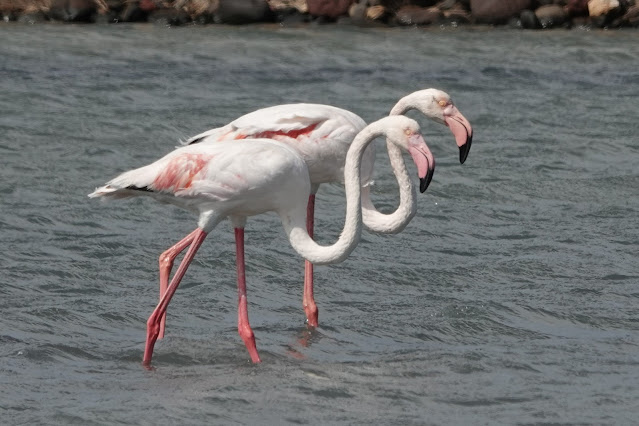 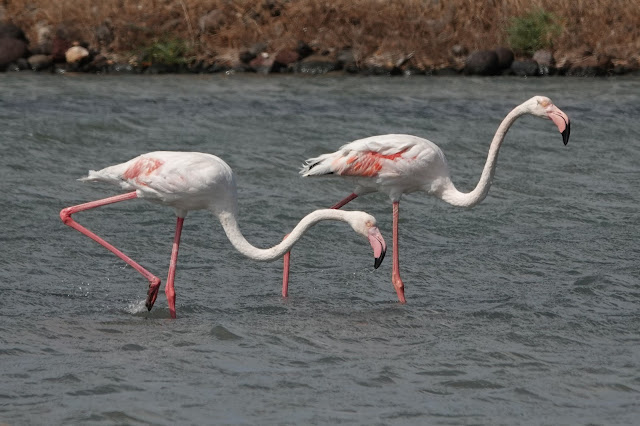 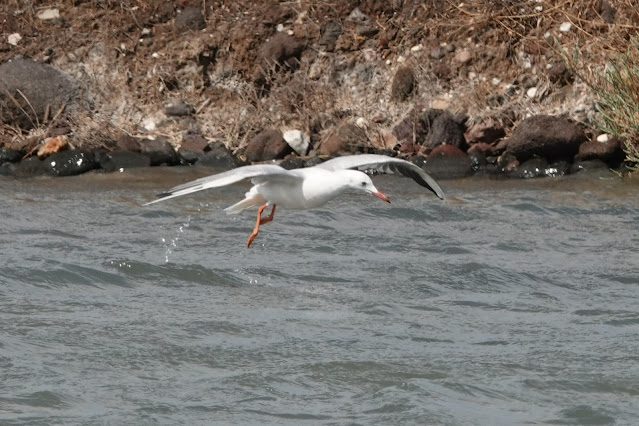 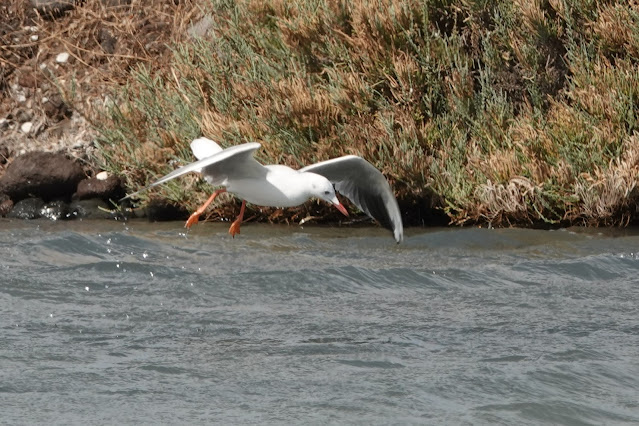 The road was followed all the way into Nifida before cutting back up to Polichinitos and the main road back into the forest. I stopped for lunch in the woods opposite the Hidden Valley of Fields (It must have a proper name!) and found Kruper's Nuthatch, Middle Spotted Spotted Woodpecker, Serin, Coal Tit (not an easy bird here), six Long-tailed Tits (that are not all that long tailed at all and call a bit like a Collared Flycatcher!), five Spotted Flycatchers and several Eastern Rock Grayling, Small Coppers and Common Darters in a clearing.

A strange call like a very loud three noted Golden Plover had me scanning the skies only to find two Short-toed Eagles engaging in some vocal interaction. I stopped and bought some tomatoes and a melon from a roadside farmer who was very happy for the custom before heading back to the Pela.

Chill time and then out for a pre-dinner Lotzaria circuit. The Spur Winged Plover was back at the Ford and showed very well while a Snipe was a trip addition. 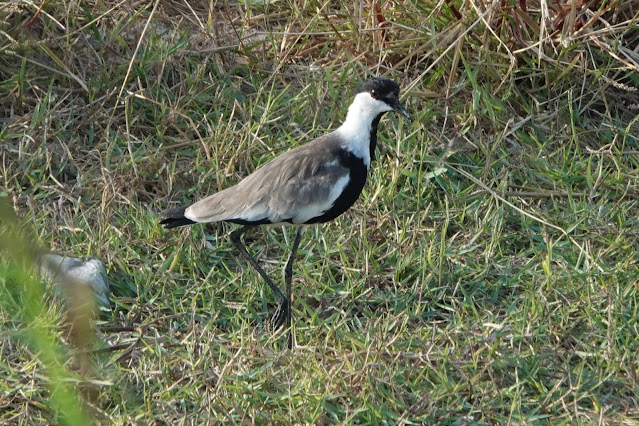 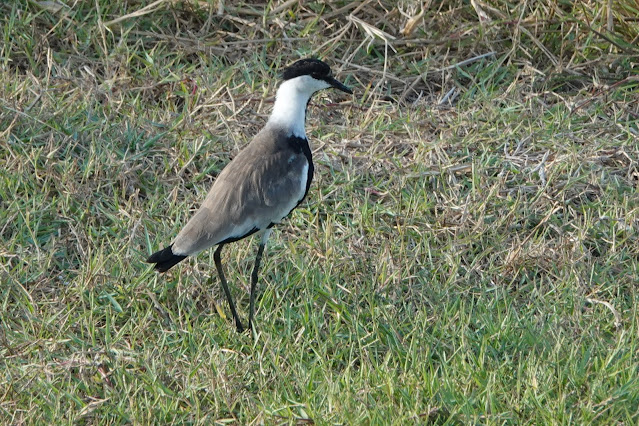 Two Cretzschmar's Buntings came down to drink and Bee-eaters glowed in the low evening sunshine. The youngsters are so green that every one required a second look in the hope that one day I will find a Blue Cheeked Bee-eater here. Wagtails erupted from the irrigated fields and the Bee-eaters weaved in and out of the watery swirls while Hoopoes magically appeared from nowhere.

Masked and Red-backed Shrikes posed and three Buzzards were on the wires and were even making dashes into the Sparrow flocks while a male Marsh Harrier was certainly new in.

Dinner was calling and it was time to head back but even then a Common Tern became a new addition to the growing holiday list. 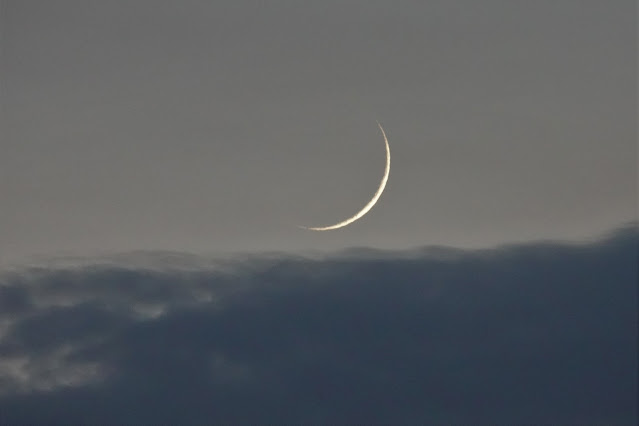