Enid B invited me to join her on a visit to Hothfield Heathlands between Lenham and Ashford this morning and this chance to be shown around a relict piece of peat bog in Kent by my favourite tame botanist was too good to pass up.  A lazy start saw us in a busy car park before 11am to be greeted by the overpowering smell of the masses of flowering Sweet Chestnut that so defines the Kentish air at this time of year.  As usual I am just not quite sure about it!

We crossed the road and made out way through the trees and then out onto the open heath before finding the boardwalk through the perfectly preserved peat boglet.

Cotton Grass was blowing in the stiff breeze with spires of Heath Spotted Orchids and yellow Bog Asphodel were dotted amongst them. Cross-leaved Heather was in full flower and closer to the ground we found perfect Round-leaved Sundews with one in flower, Louse-wort, Bog Pimpernel and Marsh St John’s Wort. 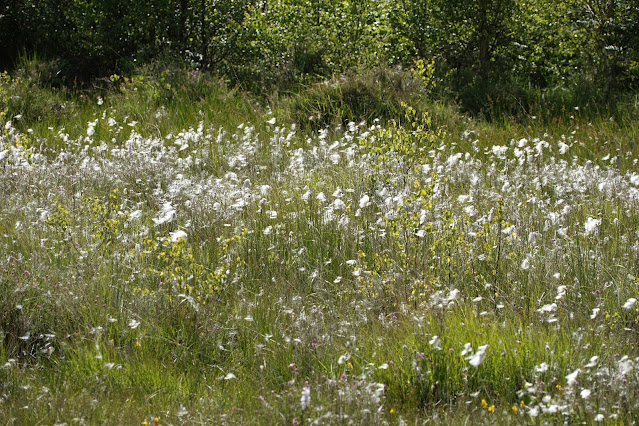 When the sun came out the temperature rose and out came a few Dragons with Broad Bodied and Four Spotted Chasers competing with sleek powder blue Keeled Skimmers for a spot to lay their eggs and just like at Old Lodge a large Tabanid was doing just the same.

Up on the sandy heath we found flowering Common Heather and what I am sure are Woodland Grasshoppers – another species I have not seen for many years and certainly not in Kent.

In the more marginal areas there were countless Meadow and a few Field Grasshoppers along with a single chunky Stripe-winged and lots of immature Long-winged Coneheads.

Yellowhammers were singing from several vantage points and I could hear bubbling Garden Warblers and softly calling Bullfinches. There were very few flies and not many bees or butterflies but we did pick up Meadow Browns, Small Copper, Small Heath, Comma and Ringlet before we got to the trees again.


It was dark in there but there was still stuff to find with flowering Ground Elder and Upright Hedge Parsley and some fruiting Redcurrents too.  The Aspens were riddled with grazing damage and I found the very slug-like larvae of a Sawfly munching away.

A big bank of Hogweed was practically devoid of anything bar a single Red Soldier Beetle and just one hoverfly with a red-eyed male Chrysogaster solstitialis.  A single Neomyia cornicina was my first this side of the country this summer.

We crossed a wet meadow to try and find the Great Stour (same one as up the other side of Canterbury) putting up hundreds of Grasshopper and Cricket nymphs and found some good plants too with a Persicaria and Marsh Cudweed and the highly aromatic Pineapple Weed and Scented Mayweed.


I was glancing at the trees for leafmines and a shadow on a Sallow caused me to turn over a leaf only to find a young Puss Moth cat suddenly stationary.  This is the first one I have ever found in the field.  Enid then picked up some almost adult Red-legged Shieldbugs (thanks Yvonne) under another leaf.

I found a couple of Grypocoris stysi on a Hogweed head and the ditch behind had four male Banded Demoiselles loafing around – it was now quite cool while Enid pointed out the impressively tall Reed Sweet Grass (Glyceria maxima) growing there.


We found the river by crossing a meadow burgeoning with flowers with mounds of Red and White Clover, Buttercups and Bird’s Foot Trefoil with patches of Fleabane in waiting.  However it was rather insect free with just a few Bumblebees of the usual species and the odd Meadow Brown and all three Skippers.  There were almost no flies at all. 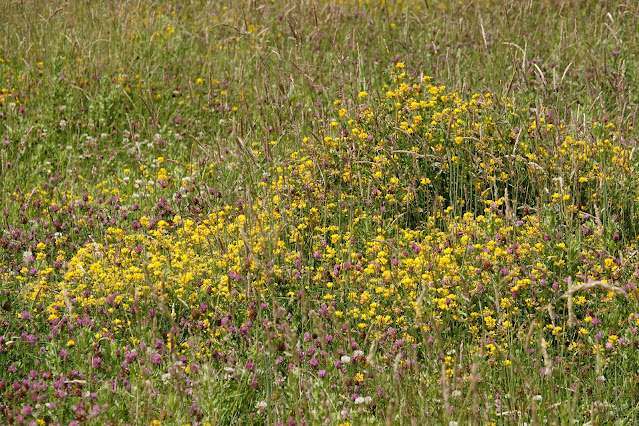 We stood on the little bridge of the Great Stour adding a Large Red Damselfly on the Angelica to the list along with a Marbled White and two more very tall smart grasses – Hairy Brome (Bromus ramosus) and Reed Canary Grass (Phalaris arundinacea).  I have to admit that I do not do grasses or sedges but am always happy to learn is someone tells me what they are!  Even the Meadowsweet had no insects on it and a big patch of Rosebay Willowherb contained several fascinated blooms.

Retracing our steps we cut across the dry sandy heath area (surely there are Nightjars here?) finding Marsh Pennywort in a damp hollow on the way before lunch back at the car where we were careful to step over the nest burrows of Bee Wolves and Ornate Tailed Digger Wasps.

Round two took us back onto the heath and then the other way round.  Two big patches of Vervain in the middle of the path distracted us before we found another boggy area. Marsh Bedstraw was new for me along with Creeping Forget-me-not and mats of Water Purslane (Lythrum portula). While Enid studied sedges I tried to get to grips with some micro moths but they all eluded me!


A Common Carpet was bigger and easier to see properly! Water Plantain, Greater Bird's Foot Trefoil, Ragged Robin, Water Mint and False Watercress were all found and single Xanthogramma pedissequum and Eumerus were the best of just a few Hoverflies.


It suddenly went dark and we could feel a few spots getting through the canopy but it looked ok to cross the heath but we had not got far before a dash to the shelter of the Birches was required as the heavens opened for a few minutes.

A circling Red Kite saw us back to the car and the end of a splendid excursion to somewhere I never even knew existed.  Always places to go and things to learn.