On Thursday I took on another role within the RSPB as a one day a week Farmland Conservation Advisor within the Land of the Fanns project.  I may be a little sketchy as what I am exactly going to be doing at the moment but suffice to say I am sure I will be trying to encourage farmers in a fairly close proximity to Rainham Marshes to become more wildlife conscious and buy into some of the schemes there to help them.   I shall post more from my explorations in due course and will still be at Rainham four days a week.

On that morning I headed north of the Thames early and had a poke around Cely Woods for Woodpeckers and although I saw and heard many Green and Great Spots, the Lesser Spots eluded me.  I did find Nuthatches and displaying Stock Doves along with three latish Redwings but the deciduous plantations are now too grown up for there to be Yellowhammers anymore.  The first Red Campion was in bloom and I could not resist looking for Stigmella aurella on the Brambles!

After this I snuck a quick look at a the male Red-crested Pochard on The Dell reservoir before meeting my colleague Emma (Essex Turtle Dove Advisor) in the Ingrebourne Valley for a walk around the farmland there which is managed excellently for wildlife. It was a little chilly and grey but there were singing Chiffchaffs and Blackcaps and a small party of Sand Martins flicked through and Buzzards mewed and displayed above. The highlight was flock of 210 Linnets over one of the specially managed fields – my largest local flock for some time.

It was then back to RSPB Rainham Marshes for some computer stuff before a late afternoon escape around the trails. I picked up Ken and Karen along the way and news that three Garganey had been seen on the Ouzel Fields quickened our pace.  The sun was now out and the air had warmed somewhat and thankfully I quickly refound these smart little ducks. Two male and female were feeding around the edge of the main rill and showed nicely before flying a short way and out of view.

Three waders were feeding along the same edge and I was sure that there was a Little Stint and two Dunlin but I had to wait for Ben to find the same birds the following day to prove I was correct. We slowly poked our heads around the edge of the Mantlet at the Chicane and they ducks were back in view before once again swimming around a corner. Seeing these in the early spring is always such a joy and these were part of quite a large south coast arrival.

A ‘hooweeet’ caught my ear from the bank and alerted the others to a hopeful Willow Warbler but suddenly it started repeating the note rapidly and my thoughts turned to Common Redstart and sure enough and stocking male popped up on top of the Mantlet for a whole two seconds before dropping out of view!  This was my earliest ever UK record.

The platform overlooking the Target Pool added several patrolling Marsh Harriers and a host of gulls but no odd waders and the Little Ringed plovers continue to elude me but the Bearded Tits were vocal and pinging around on both sides of us while a Water Pipit came up and climbed high.

The light was a bit harsh on Aveley Pools but the view back from the Barn Owl Gate provided a chance to scan for the Great White Egret and I found it lurking behind a stand of reeds where the orange dagger of a bill could clearly be seen. Unfortunately the Grey Herons that dropped in did not push it further into the open.

There were a few Brimstone and Peacocks on the walk back through the woodland but no more migrants.

I got to work early so that I could have a walk along the river wall.  It was grey and very cool and I joined Barry J for and amble that ended up becoming more of a ‘put the world to rights’ session than a ‘nature walk’!

Sedge Warblers were still chattering away regardless and Cetti’s Warblers have certainly not been affected by the winter cold snap while the Redshanks and Lapwings were giving grief to Carrion Crows, Magpies and Marsh Harriers.  Three Sand Martins tracked along the riverwall and there were a few Meadow Pipits on the move. I left B to carry on to the far end and on my way back I picked up the Great White Egret coming into land near the Ken Barrett Hide where it promptly disappeared.

Most of the day was spent on our outside reception where Med Gulls could be heard moving over with some regularity before a late afternoon escape onto the trails.  One of the drake Garganey was still on the Ouzel Field and a male Ruff was out on the Targets where the Harriers were keeping things on the move.  I was hoping for the Yellow Wagtails seen earlier by Ben R and others and was happy when they were spooked up from the History Pool and alighted on the fence like little glowing yellow Marsh Marigolds. They only stayed briefly before continuing their quest for more tasty inverts but there is something very special about seeing your first ones each spring.

Another pre work walk along the river wall with a fine plump Curlew being the photographic highlight along with a dashing Fox that scampered along the Victorian seawall but it was good to add two more year ticks with two male Whitethroats and a ridiculously early Reed Warbler that was first seen by Ben R the day before. It felt like there should have been a Ring Ouzel day!

It was back to reception for the most part but my lunch break allowed me to watch the now nine pairs of Avocets stropping about on their chosen island and my first Swallow head high and north while I was watching skydancing Harriers.

There was a little bit of late afternoon excitement with four Common Scoter drifting up and down the river and a seriously bobtastic Jack Snipe that was found by Andrew G on the Purfleet Scrape. This is the best time of year to actually see this species on the marsh and these island margins often hold this enigmatic species.

As we left after work I spotted our one and only Holm Oak by our front gate. I thought as you do... ‘I wonder if it has Ectodemia heringnella moth leaf mines on it?’ A quick look and it was riddled with them! I blame Antony for leading me astray... 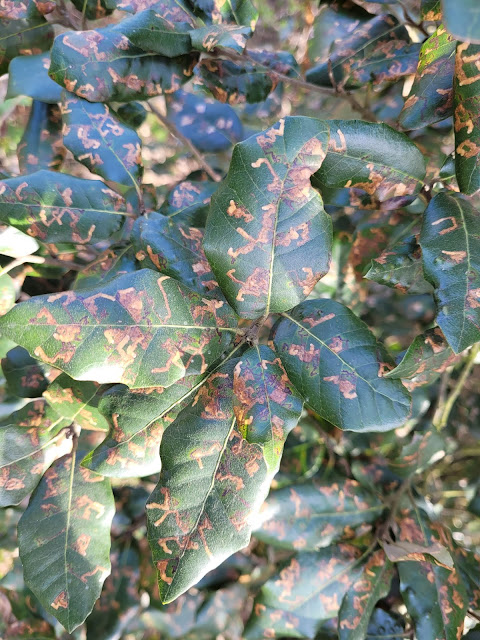 It dawned grey and calm and I was greeted by a little flotilla of four drake and two female Common Scoter as I reached the river.  They spent most of the morning drifting out with the tide and them flying back up towards Aveley Bay before doing it all over again.  The river was like a mill pond and there were small parties of Gadwall and Wigeon dabbling on the surface.

The Reed and Sedge Warbler were still singing by the Purfleet Hide and I watched some alarming Redshank push a Stoat out of cover and give chase causing it to put up three Yellow Wagtails in the process which was nice.

The Raven appeared for the first of two passes during the day and there were several Buzzards up over the car park as the day progressed and the weather improved.

I managed to escape during my lunch break and find a few inverts for my efforts with Small White, Green veined White, Comma, Small Tortoiseshell, Peacock and Brimstone butterflies, lots of Dark-edged Bee Flies zipping around and visiting the Ground Ivy, Dock Leatherbugs and Mottled Shieldbugs and a few Hovers and Bees.

I was particularly looking out for one of my favourite spring flies and I knew that others had found them on previous days so I sought out sunny tree trunks and there were the hoped for Gymnocheta viridis bedecked in shiny green and covered in funky hairs.

Amongst the Bumbles most were obvious Bombus terrestris but I was pleased to find a big Queen Bombus hortorum on White Dead Nettle while the only Andrena I found was female A.flavipes. It was therefore also good to see a couple of Nomada fucata which parasitizes them.

My car park amblings also produced my first Slender Groundhopper for many years which was flying around at head height before landing in the middle of the road and I had to apologies to the owners of the car that came round the corner and found me lying there with camera in hand!

The prize car park find though was not the Groundhopper but Roy’s 1956 Chevrolet that purred into an extra wide parking space with acres of chrome gleaming in the sunshine. I even got to sit behind the wheel. 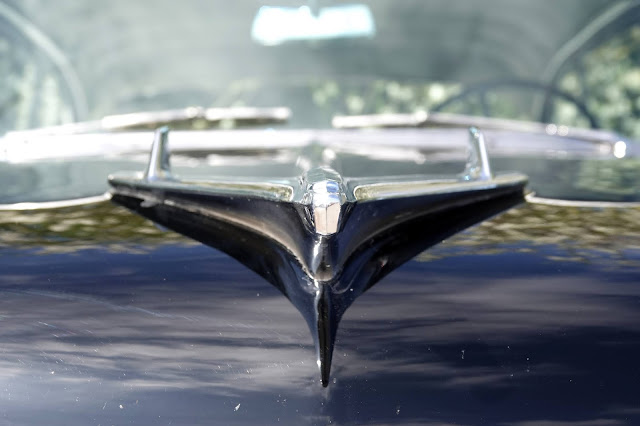 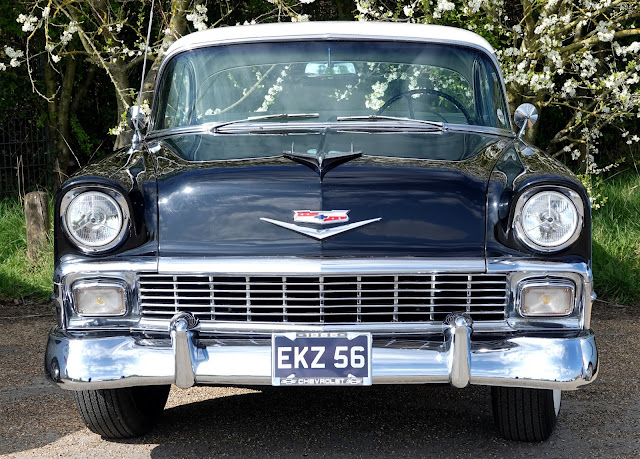 What a difference a day makes. It was a bitterly cold day with a face numbing northerly blowing all day and I reverted back to the five layers of clothing making me look like Mr Staypuft.  Even though the sun came out and the sky was mostly blue it was still very uncomfortable away from the shelter of the centre.  As such there was little in the way of wildlife forays to speak of but a very cute female Brown Rat was a regular visitor to the ground feeder by Reception where she was stocking up on suet pellets to take back to her larder. Everything has its place and I find watching Rats a joy. They are intelligent and always look immaculate and there is always a glint in those blackberry eyes.  She let me sit quite close and take some shots. 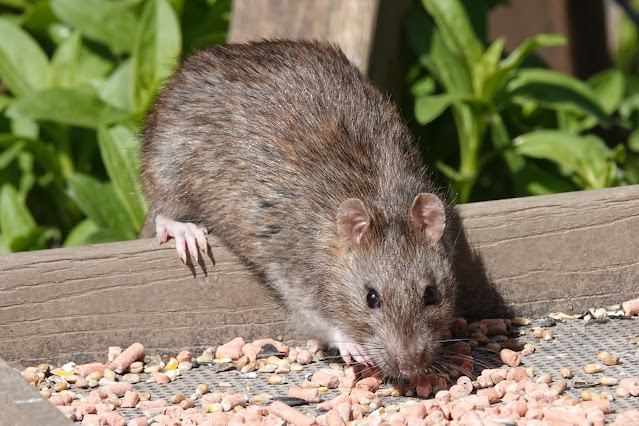 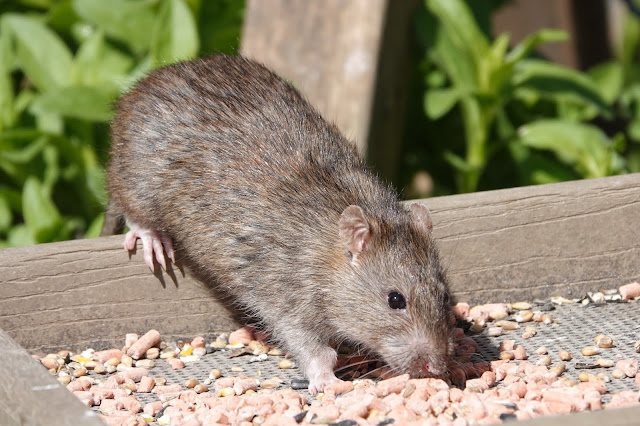 I did some gardening around one of the lawn Bee Orchids to give it some air and space and the first of out Spanish hybrid type Bluebells were starting to come out. I attempted to find some warm sheltered spot in the car park while the sun was shining and was rewarded with my first confirmed Andrena nitida for the reserve and a posing male Chironomid Midge that was one of thousands on the wing over the weekend.

I braved the end of the ramp for lunch but it was just too cold to stay for the duration but the Pintails were smart as ever and both Grey Heron and Little Egrets were hunting quite close to the fenceline.

My day and exciting Easter Holiday was rounded up by myself and Lou walking the river wall and filling two black sacks of bottles, paper cups, baby wipes, face masks (disposable does not mean throw them on the ground!) and a whole variety of full and ripe dog poo bags that had been stacked, squashed, flung and hung along the first half a mile.  There is no point in me ranting but the older I get the less I understand what makes other people tick...

A solitary House Martin with white rump flashing as we closed up for the day returned my smile.

It has been a long week, night night...