This morning I had my opportunity to receive my first jab but as my options as I live in Strood in Kent were Grays, East Ham or Dagenham I chose the ‘nam option as the centre was right next to the Chase! I had an 8.30 appointment but made sure I had plenty of time for a wander around my old stomping ground beforehand.

It was very still and there was yet another heavy frost on the ground as I headed across towards the BarDag where the sounds of Willow Warbler, Chiffchaff, Blackcap and Whitethroat greeted me. The BarDag lake is so much bigger than I remember it for some reason!  There were several fishermen lurking in giant green igloos and a pair of Great Crested Grebes were nosily patrolling.

Ring-necked Parakeets dashed overhead and a similarly bright male Greenfinch wheezed at me before zigzagging off on a deranged display flight.

Bunnies lurked in the dewy corners and I could hear Great Spotted Woodpeckers drumming and Greens yaffling away.  There was no one around at all.

I cut down to the Slack where all the horses and ponies were loitering and steaming gently in the early rays.  The paths had all dried out since my January squidge and I was able to watch without getting wet feet. 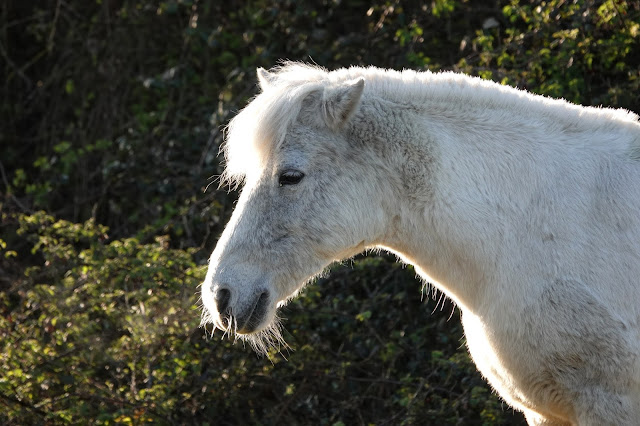 I counted 17 Shoveler, four Teal and a two pair of Gadwall as well as three boisterous Egyptian Geese. There were a few Herring and Lesser Black-backed Gulls on the island but I saw no waders. 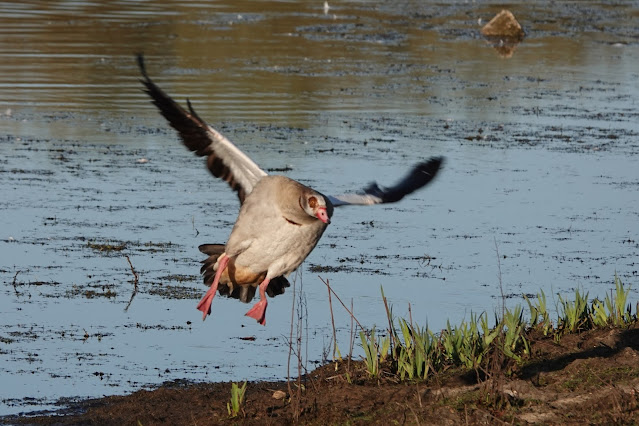 I cut through to the stables road where we used to see Little owls all those years ago and I wistfully looked at the Willow Tit Willows.  A male Swallow was distractedly singing to himself with his eyes closed on the stable wires but the paddocks held no errant chat type birds. 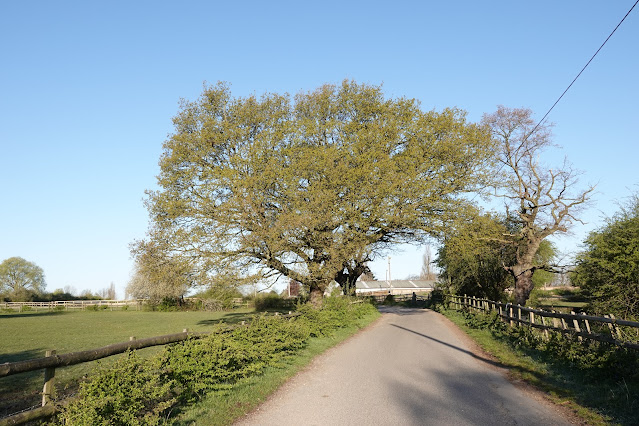 A glance up ahead at the right time gave me an Egret but not the expected Little – a Great White! I languidly flew north still sporting dark legs but the makings of a darkening summer bill. This is still a very good bird for the site but 2021 has already seen several such sightings. 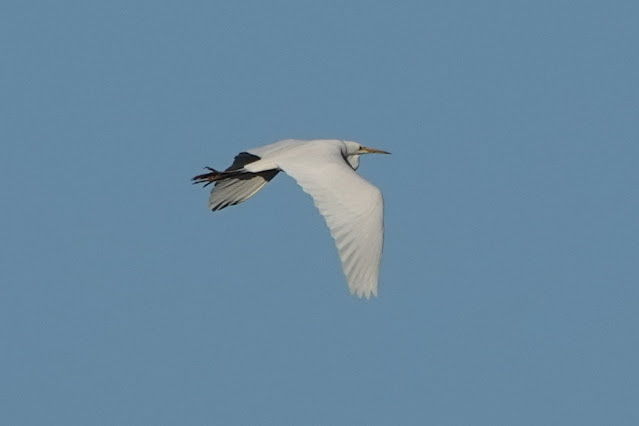 I stopped at my car for a coffee and watched a newly hatched brood of Egyptians before sloping off to be vaccined up. 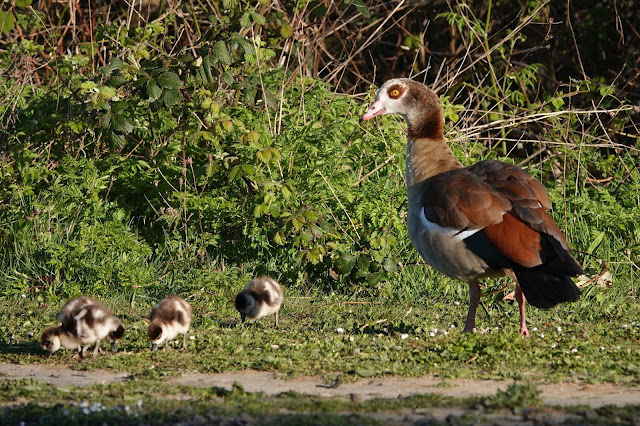 I was still at work at Rainham on time and headed out for an engagement circuit mid-morning. It got off to a fine stat with the Spoonbill feeding avidly between Purfleet Scrape and Aveley Pool and in fact it did not stop until 4pm when it finally nodded off! A male Whitethroat was in full song at the end of the Ramp and was new in and a silent Cuckoo flew slowly past me proving me correct about having one by the weekend.

It was once again too chilly for many insects but by looking at ankle height I did find a few Bee Flies and three Hoverfly species with Epistrophe eligans, Eristalis pertinax and my first fluffy Eristalis intricaria while a Green Veined White was the only butterfly I saw.

Lichens distracted me in the playground and I have once again set Bob loose...


A few Sand Martins and Swallows were high above the Pools and the Spoonbill showed a little closer from the other side while both adult Ravens were out scavenging and seemed to be stashing largish eggs near the MDZ.

I heard a single hardy Reed Warbler and several Sedgies and the Bearded Tits followed me at knee height as I walked alongside the Dragonfly Pool with lots of soft calls and occasional appearances.

Marsh Harriers were always on view and one female spooked a wisp of eight Snipe and some Teal from the hidden pond behind the old RDZ classroom.  The skies had darkened to the north and the already poor temperature had dropped so I pushed on, only stopping to watch a fine male Lapwing feeding on the path verges just in front of me where it shone with petrol brilliance despite the lack of sunshine. 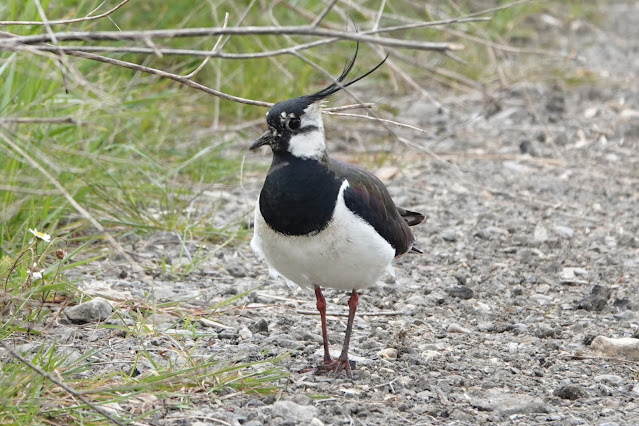 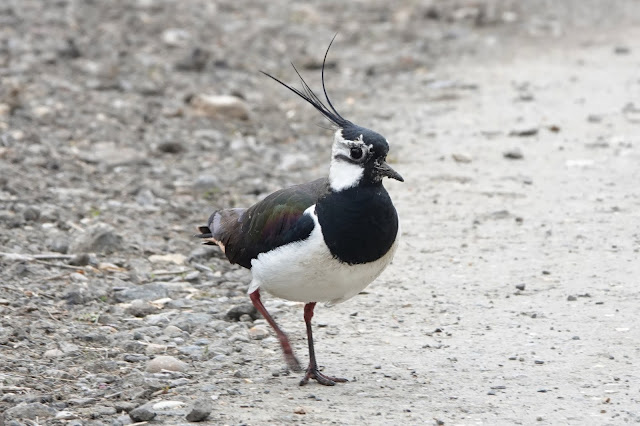 A couple of male Reed Buntings moved along with me as I reached the Turnstile and headed up to have a look at the river.  A single Whimbrel had been seen for a few days but had eluded me so I was pleased to find it having a bath on the foreshore while eight Curlew, Avocets, Oystercatchers and Redshanks milled around.  It flew off calling and filled me head with the sound of warmer spring marshland days and late summer estuary walks.  To think it may have wintered in the Gambia just a few short weeks ago and been catching little crabs from the muddy channels of Kotu Creek with Crocs lurking and tiny jewel-like Malachite Kingfishers perched above watching the murky waters below. 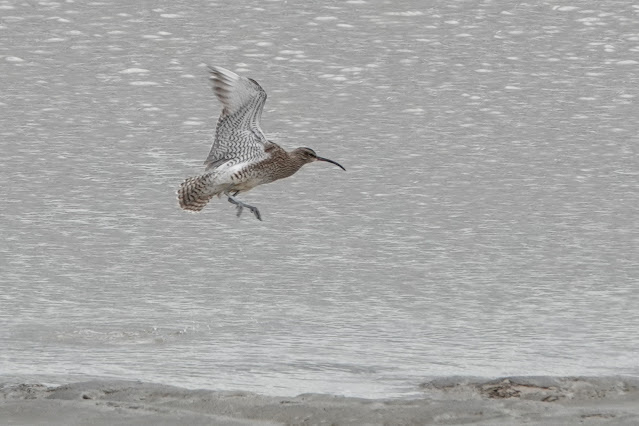 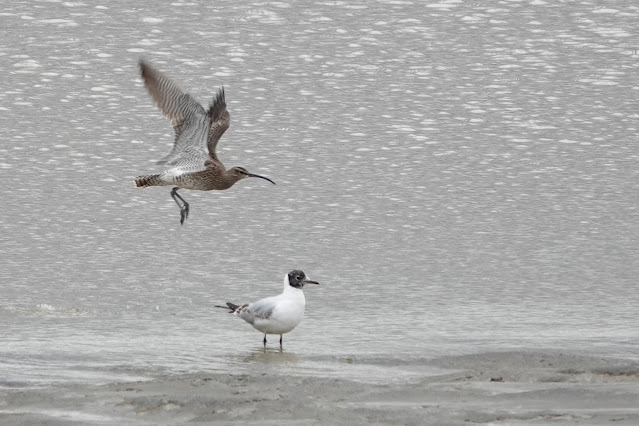 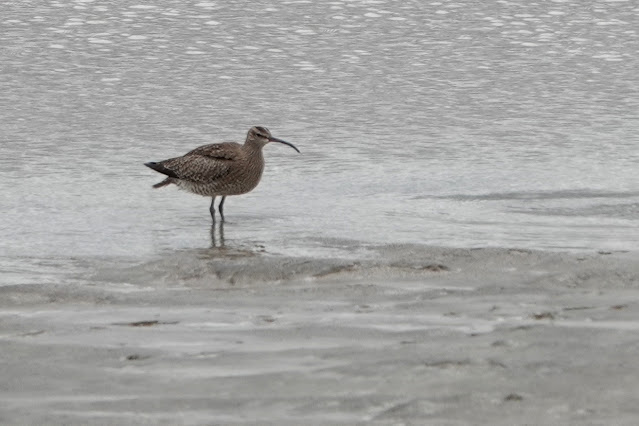 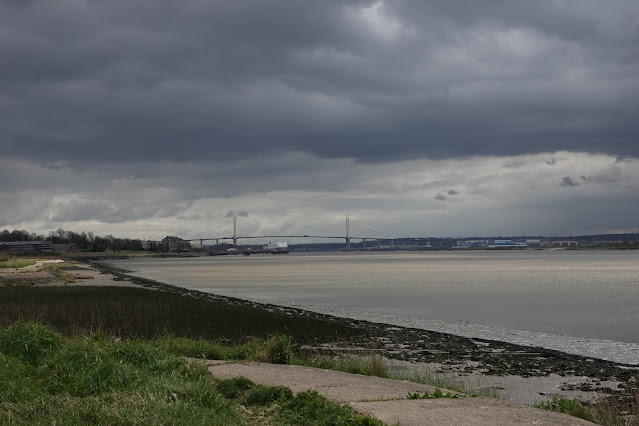 The day got colder from here on in and there was even a little rain but we really need this northerly air flow to bugger off now and allow so warmer more spring-like weather to push its way in bringing more migrants and raising sprits.