Nine hours of almost undisturbed sleep later I awoke to the bing bong of the ‘nearly there breakfast announcement’ which gave us time for the first coffee and an amble up onto the top deck in the pre-dawn light to watch Gannets, Eiders, Guillemots and Razorbills in the harbour approaches and the first pied Tysties whizzed past the stern.

We were off quickly and headed straight for the Fjara for our traditional full Scottish breakfast with the traditional Sassermeat and Black Pudding nestling amongst other meaty produce!  Start as you mean to go on…

Gannets dived just outside the windows and there were Turnstones and Hooded Crows on the rocks below.  With the weather blustery and threatening we opted for a mop up of the birds already present around the middle section of Mainland and so made for Wadbister Voe and the village of Girlsta to scan for the immature drake King Eider.  The light was in our faces but a convenient cloud and the shelter of the fish hatchery allowed us to pick him up as he bobbed along with a large flotilla of Common Eiders.  He was basically brown with a paler breast and an obvious orange bill. The rain returned and we swiftly moved on. 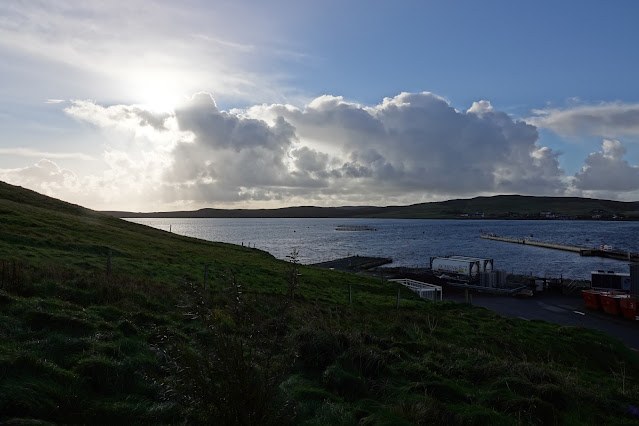 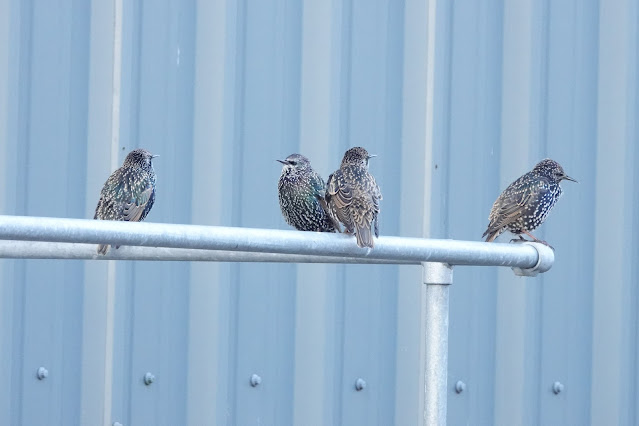 Great White Egret may now be an almost expected bird on a day out down south now but ion Shetland it is still big news so it felt rude not to drive by the one on the reedy end of the inland Sandwater. I will admit to not giving it my full intention as it was a long way off and required a slightly dodgy roadside stop but I could add it to me ‘Essence of Egret’ images…

From here we headed to Lower Voe where the heavens opened, albeit briefly but between squalls we managed some excellent views of the Red-breasted Flycatcher as it flicked around the Sycamores.  Two Robins and two Redwings were in the gardens and Grey Wagtail and Siskin called overhead. 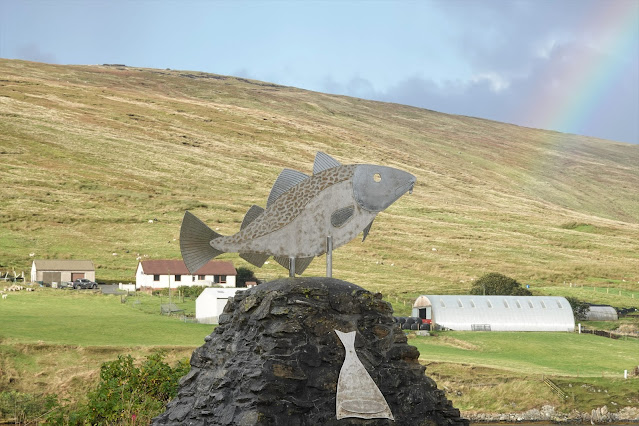 The calm harbour was dotted with auks – mostly Razorbills and all seemed to be in good condition and were actively catching small fish. Fiver Mergansers and an immature male Goosander were joining in on the easy food source and a couple of Grey Herons were feeding around the seaweedy edges. 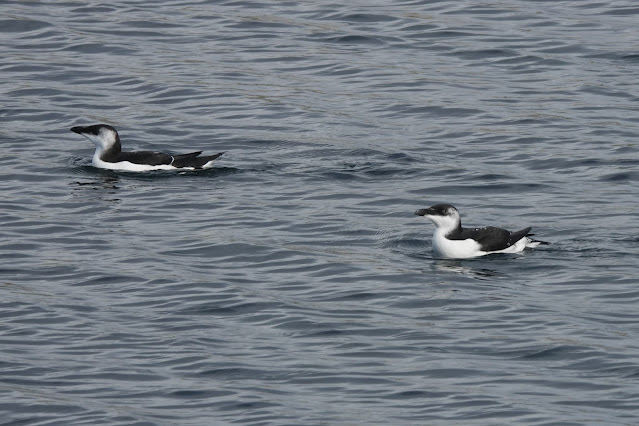 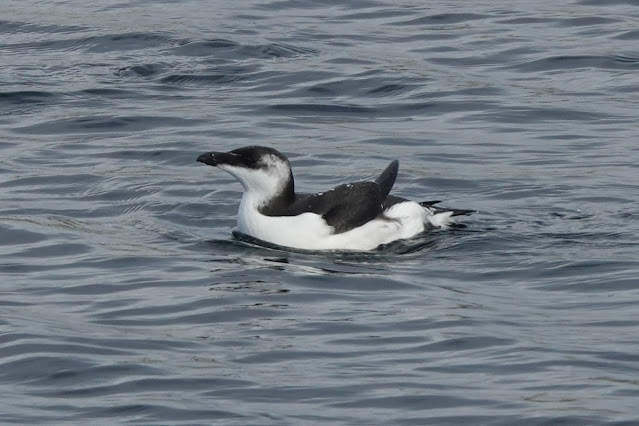 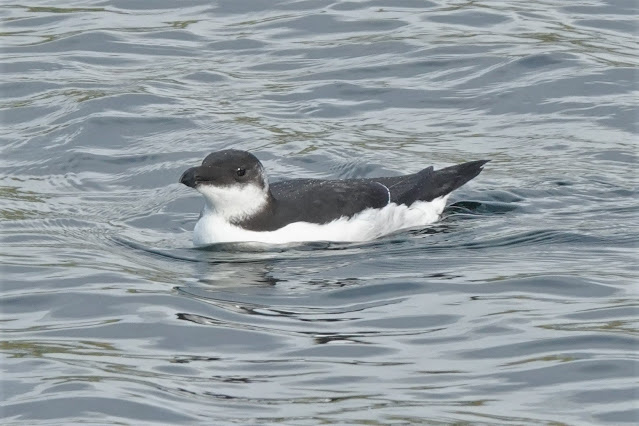 On again and over the top towards Aith – passing the Cake Fridge of Happiness en route but of the first-winter Woodchat Shrike there was no sign around its chosen gardens. Three Mealy Redpolls grovelled in the verge along with a two Redwing before we decided to head for the Dinosaur Woodland (as I call it) for a nose about.  There was a good flock of Chaffinches moving about but we could hear no Brambling – but news that the shrike had finished digesting and was back out on show again quickly drew us the short distance back down the road. 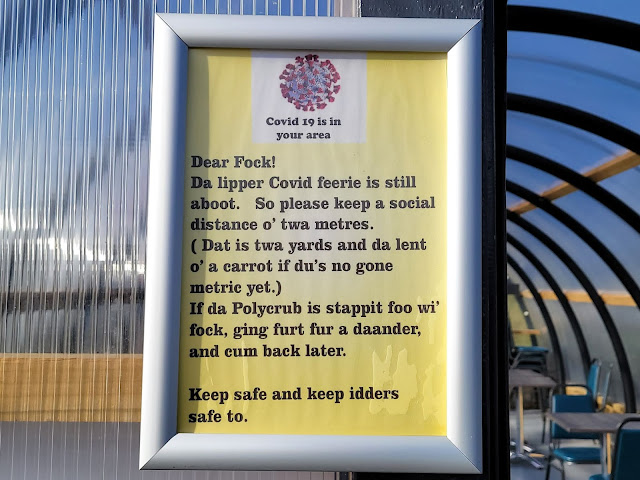 It was immediately on show and over the next half hour it actively fed from the fence line, dashing to the ground to catch a snack.  It was quite well advanced in plumage and already had a ghosting of the ginger crown and nape. 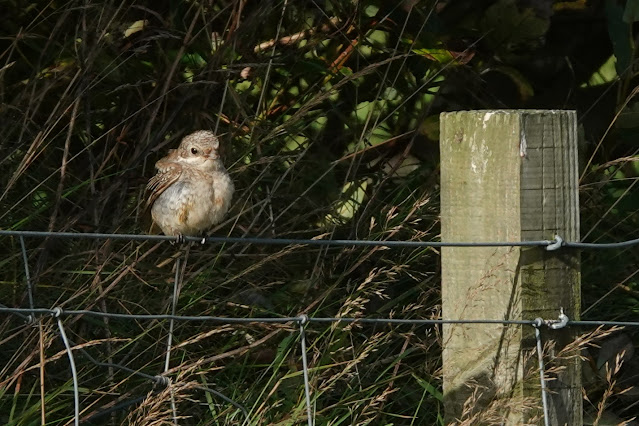 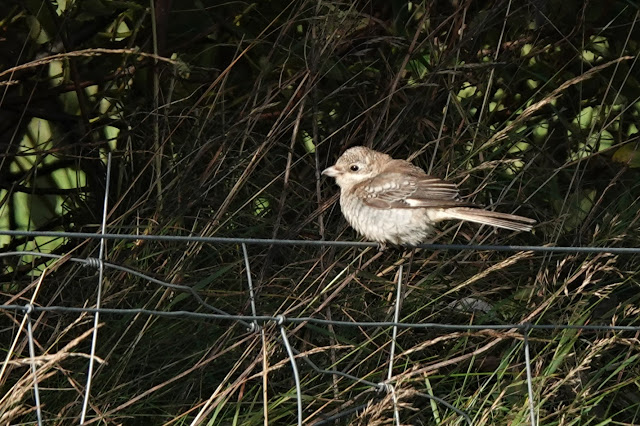 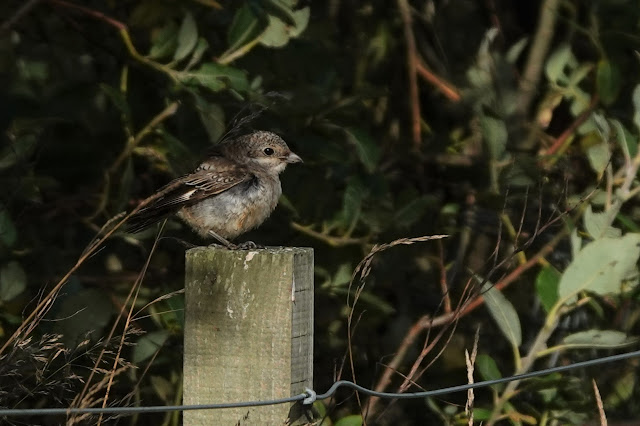 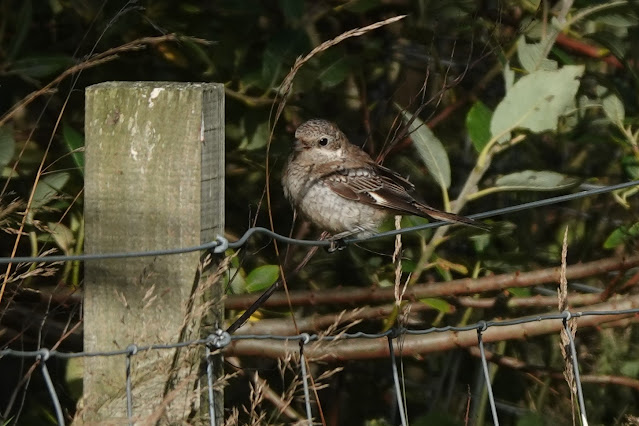 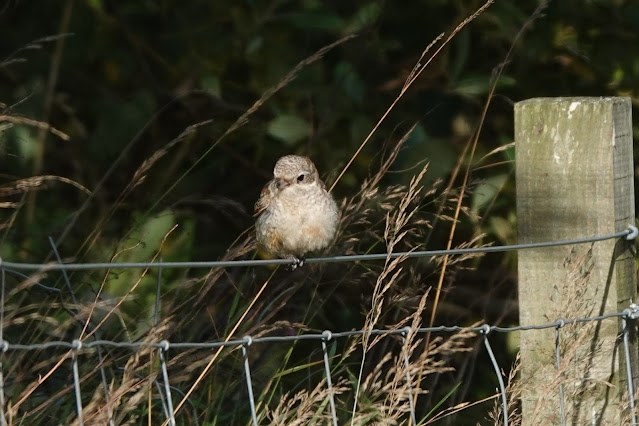 A Red-backed Shrike out on East Burra at Lochend was the next and we soon saw this richly coloured juvenile feeding in the shelter of the leeward side of the small plantation.  Unusually it seemed to prefer sitting up high on the dead snags to the fence line but that could have been the presence of a few birders. 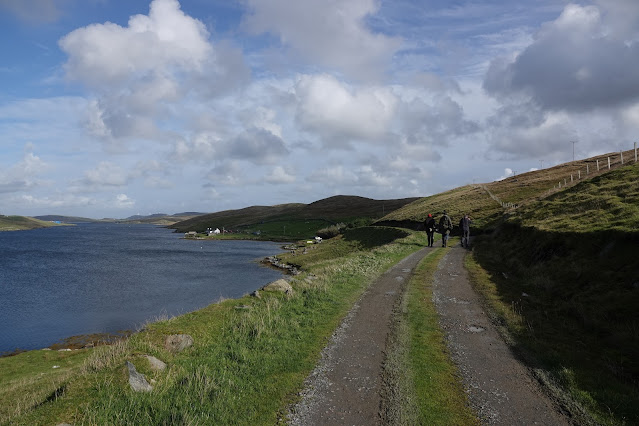 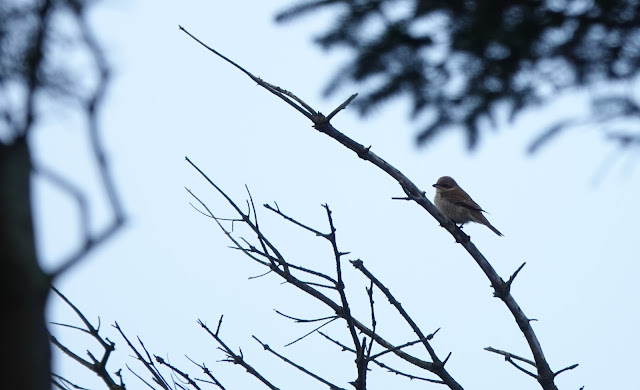 A very vocal Pied Flycatcher came out on the front edge occasionally and we were convinced that there was a rattling Red-breasted Flycatcher in the too although we never saw it.  A Yellow-browed Warbler was also seen, often with the Pied Fly although it only ever called once and Goldcrest, Song Thrush, Chaffinch and Brambling were also lurking within. A loud Redpoll call was heard and the bird dropped in front of David and I. Bins up and a fluffy snowball of a Hornemann’s Arctic Redpoll (or Horny ‘Poll as it is sometimes called) was in view. I called on the radio for the others to come round and thankfully it stayed long enough for everyone to get some good views as it moved through the Willows.  It was a large, long Redpoll with startling grey and white plumage and a warm apricot suffusion on the face and the ubiquitous red forehead.  The rump was pure white and fluffy and this bird seemed to tick all the right boxes.  A possible had been reported during the morning so we were very pleased to nail it down for the original finders.  All too soon it moved off up the track and despite flying low we could not refind it. 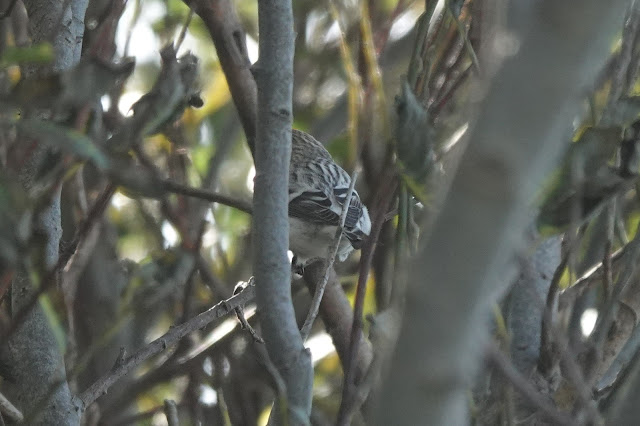 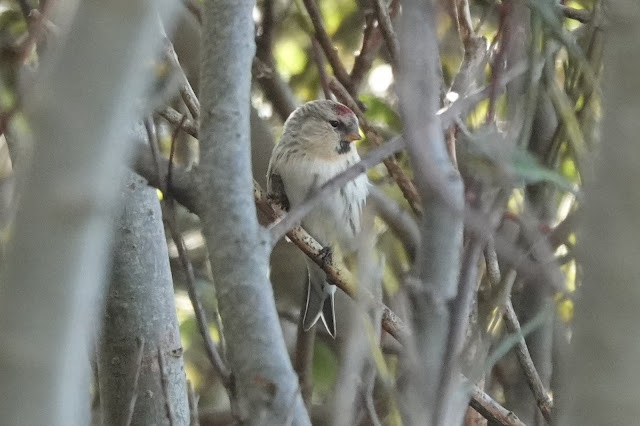 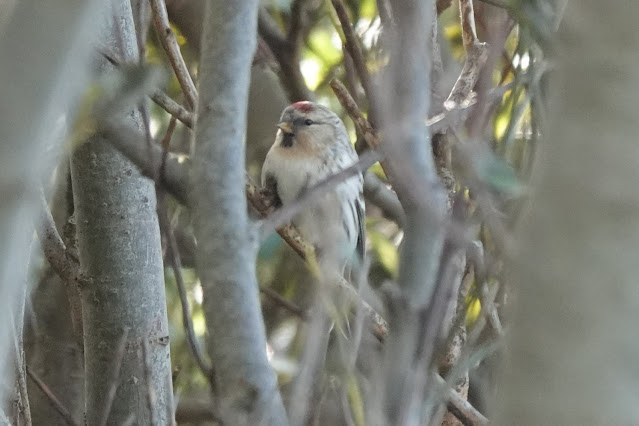 An immature male Sparrowhawk hurtled into the canopy before scooting up the hillside to contemplate his next assault from a fence post.  Down in the Voe there was a mass congregation of feeding Shags but we could only come up with inappropriate terminology for such a gathering… 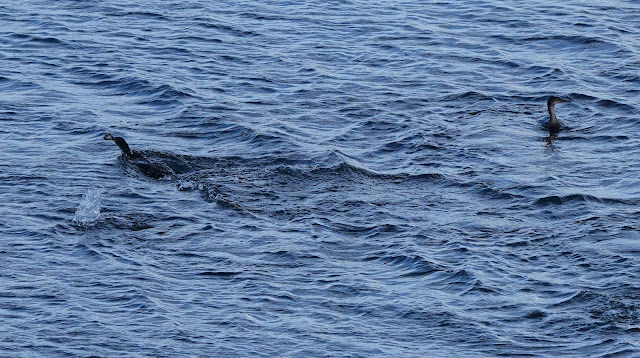 It was tempting to call it a day at this point and so we made our way towards our digs at Hoswick, unloaded the car and were then immediately lured back out after the still present Eastern Yellow Wagtail sent us south to Noss, just up from RSPB Loch of Spiggie.  Thankfully it was on show as soon as we arrived as it tottered around the muddy farm tracks and damp run off field. A darker more contrasting first-winter bird than the one on Unst in 2018 but still in shades of grey and white with a slight bit of bill base colour.  The short buzzy call was heard as it flitted to and fro.  As it happened this was its last day. 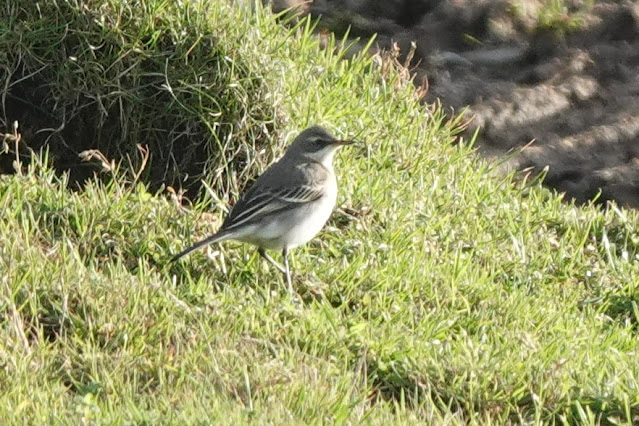 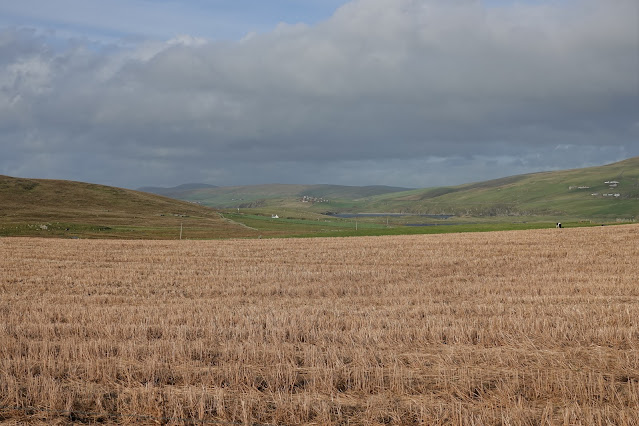 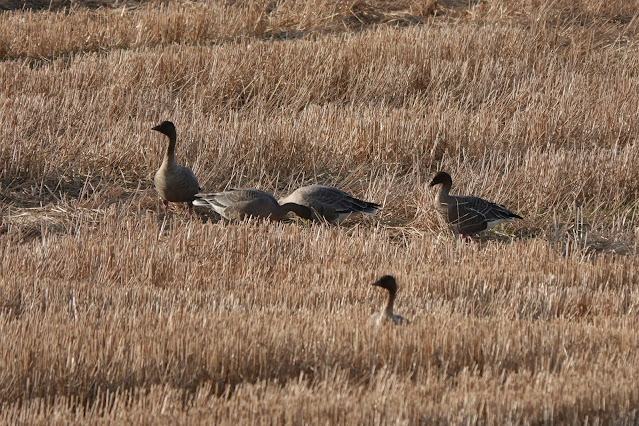 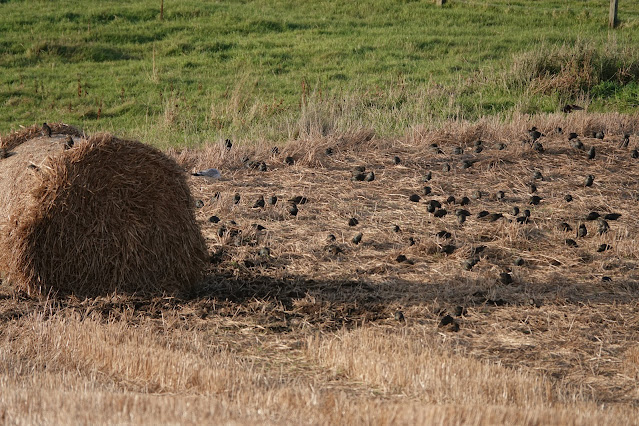 We retraced our steps back to Spiggie where 45 Whooper Swans were present along with a small Wigeon flock and five Ringed Plover flew around with some Snipe.  A flock of 200 or so Golden Plover were in the fields.

Our Hoswick bound direction did not last long as news of a Semi-palmated Sandpiper at Pool of Virkie had us dashing even further south and we were soon following the curve of the beach around to where the waders were roosting over the incoming tide.  As it happened the bird had not been seen for twenty minutes but there were still a few nice waders to watch with 20 Dunlin, 14 Bar-tailed Godwits, 12 Knot and seven Ringed Plover.  Wellies were helpful here and I suspect this may be the first twitch I have been to, where standing in the sea was beneficial.

A single Pale-bellied Brent Goose was a good find the bay and a Shetland tick for most present. It was good to bump into friends and catch up before ambling back to the cars where news broke that it was at the other end of the bay on a tiny pool. Cue a mad dash to the end with Jono, Pete and I throwing ourselves into the back of the Disco Bus driven by Hawky and  his posse of Shaun Boy, the Cowboy, Andy L, Blow Monkey and Bradders following on behind in the car but it flew off a few seconds too soon… oh well can’t win them all.  The Brents had increased to six as we drove back out.

It was time for Tesco shopping for dinners and such like and a relaxing first evening in our twee cottage overlooking the bay as the wind picked up and the overnight storm approached.