With nothing to chase it gave us the opportunity at last to head as far north as possible on Mainland and after picking up lunch in Brae (as they is not much beyond that) we decided to pop into a peaceful Busta House.  There was no wind but unfortunately no birds either so we swiftly moved on and over Mavis Grind with the Atlantic one side and the North Sea the other and up onto North Mavine via Hillswick towards Eshaness. 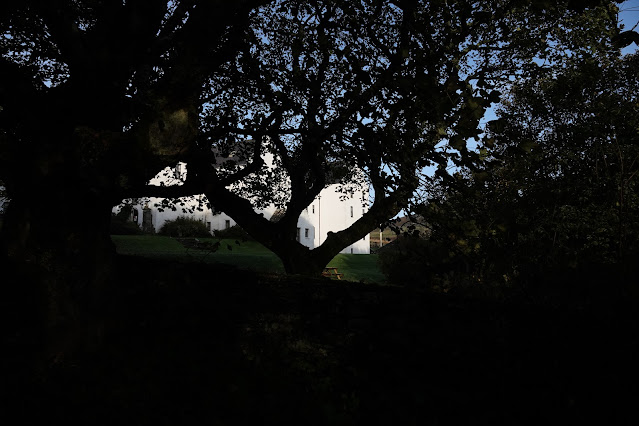 Once out in this wild and windswept landscape we stopped to take a few shots looking to the south down the rugged wave eroded coastline and had a look around the lichen covered walled garden of Tangwick Haa and then down to Stenness where an immature drake Pintail flying across the bay was out best find (and another duck to the list!).  Rock Doves, Starlings, Curlews and Golden Plovers were in the fields and the odd Redwing and Twite were seen but to be honest I always long to come out here for the vistas with the added hope that an American wader will totter across the golfgreen-like sward along the headland. 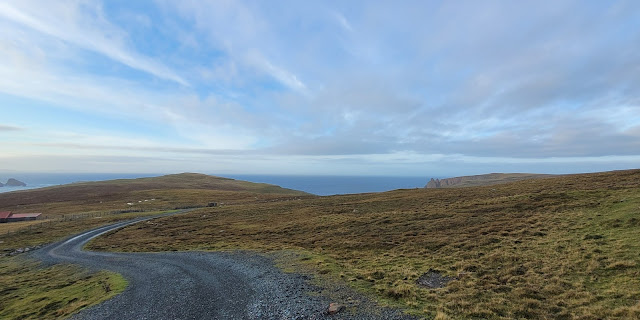 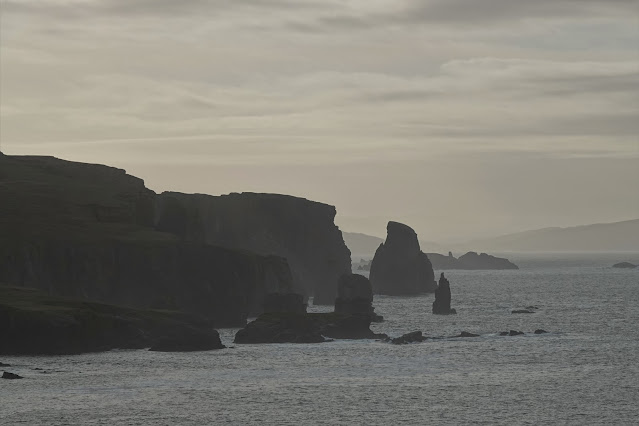 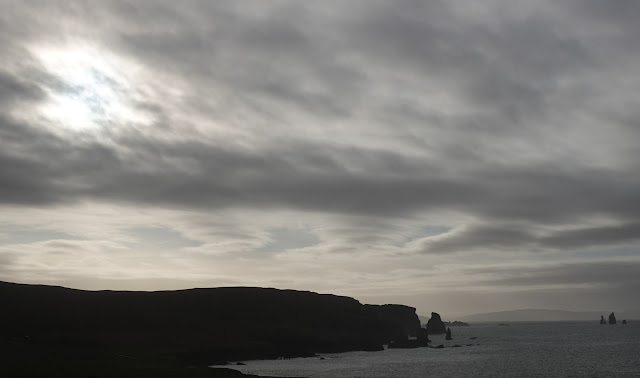 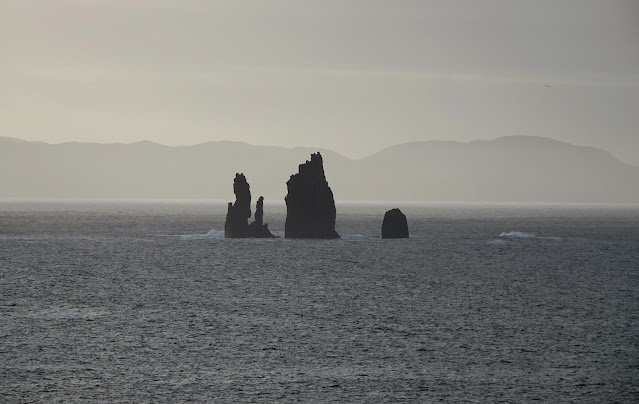 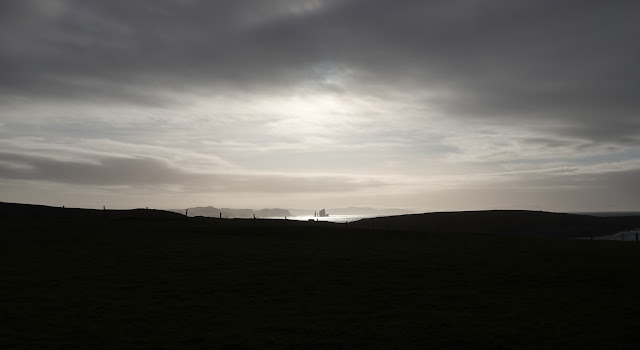 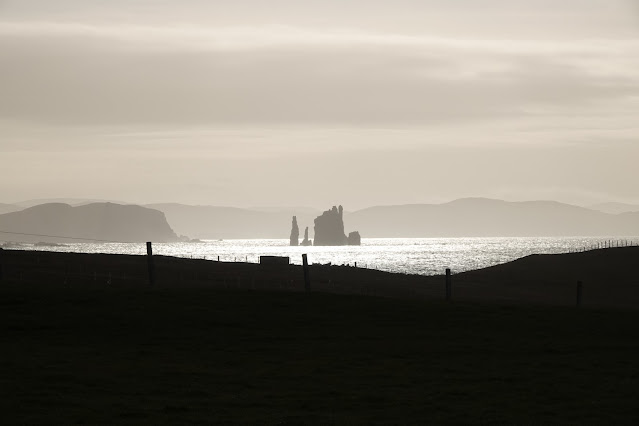 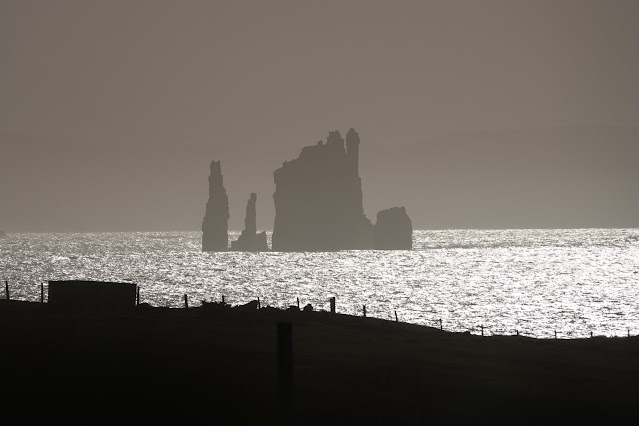 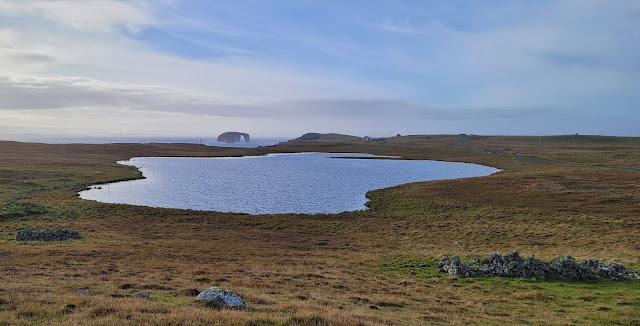 We got to the white and yellow lighthouse and split up as usual.  I raised my bins to the sea and a dorsal fin and blow briefly appeared. I called large cetacean on the radio but then it came up again and I knew what I had found. The radio was ignored and I shouted ‘ORRRRRCCCCAAAAA!’

The lads came running and the next hour was spent watching eight of these most magnificent animals purposefully cruising about from the top of the most magnificent cliffs.  We reckoned on a huge adult bull, five smaller female/male types and two noticeably dinky calves.  The bull was only loosely with them most of the time preferring a single female for company.  At their closest there were probably about half a mile out (hence the graininess of the pics) but the views were simply awesome.  You could see the blow spray with the naked eye and there was some spy hopping and several good tail slaps.  At times it felt like they were hunting fish as the whole pod would surge forward and start changing direction and the presence of plenty of Fulmars, Gannets and Kittiwakes suggested that food was within reach.  A small fishing boat ended up on exactly the same line and  the Orcas came very close to it giving you a true impression of their size. 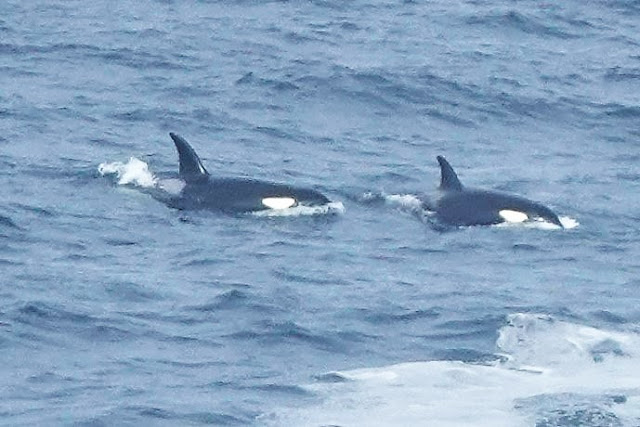 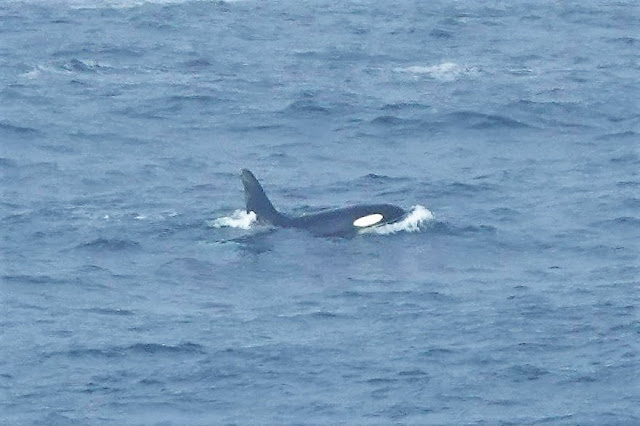 Reception is very poor at Eshaness but David managed to get a message out and a few people succeeded in getting there in time including a very happy Donald Wilson who we had been encountering most days.

A Sooty Shearwater that came through on the same line was my first for many years as it flashed silvery underwings against chocolate brown.  To think it would have spent the previous winter down around the Falkland Islands where they breed before heading up the east coast of South America to get into British waters only to make its way back down the west coast of Africa to be back at its nest burrow during November.

Elated at seeing Orcas in such a memorable location we set off on our original mission to scour the grassy plateaux for waders and buntings. Only two birds were encountered – a Redshank and a single male Snow Bunting that was feeding around the peaty lochan. 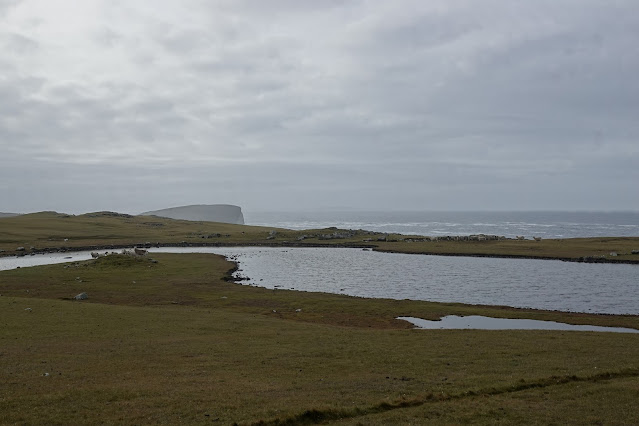 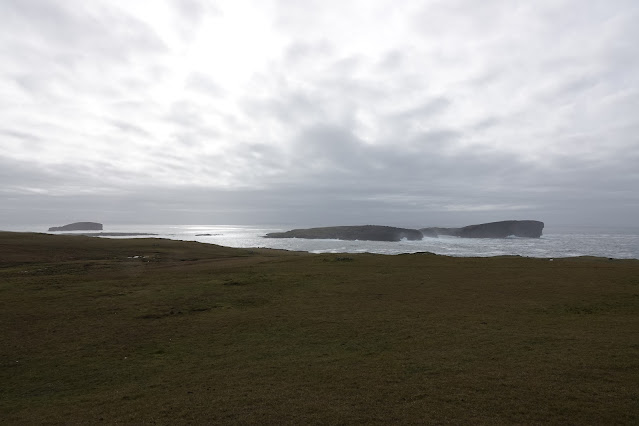 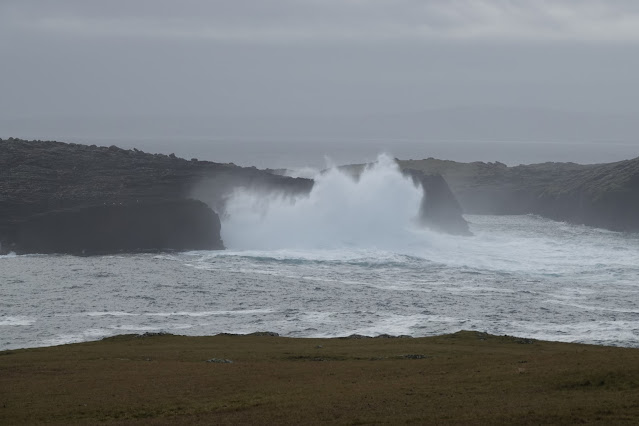 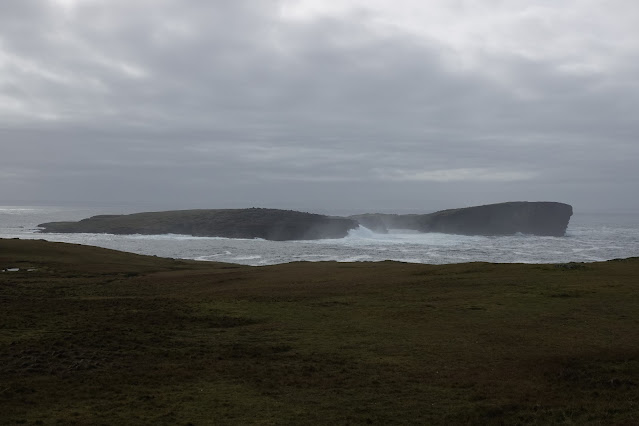 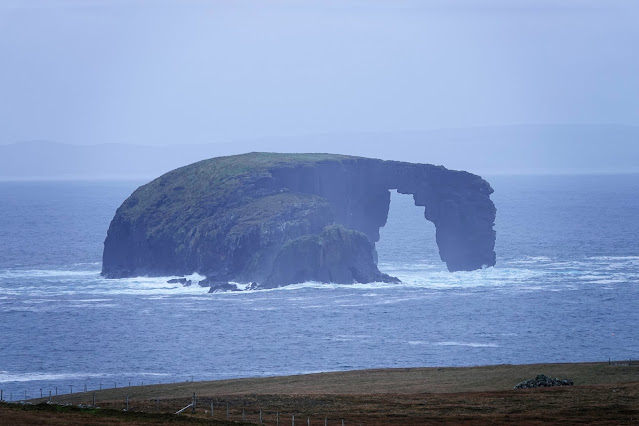 As usual I was distracted by the views and crashing waves and the sheer natural isolation of the place.

We took lunch at the end of the Heylor road overlooking Ronas Voe and the hills above.  A raft of 73 Eider bobbed around below us with a drake Common Scoter amongst them (a Shetland tick for all of us and more quality duckage). A drake Long-tailed Duck was around the mussel buoys along with Shags and Tysties and a Black-throated Diver snuck out to sea almost un-noticed. We scanned the western flank of Ronas Hill for Snowy Owls… 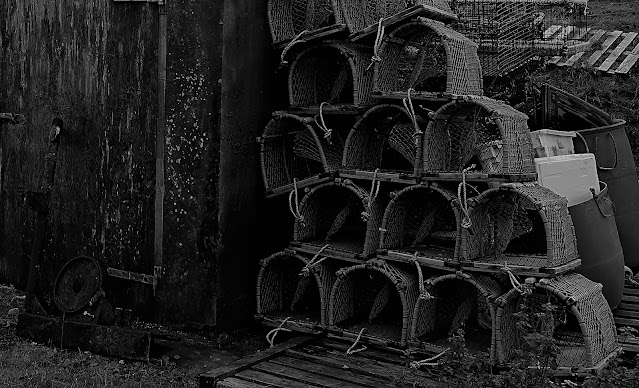 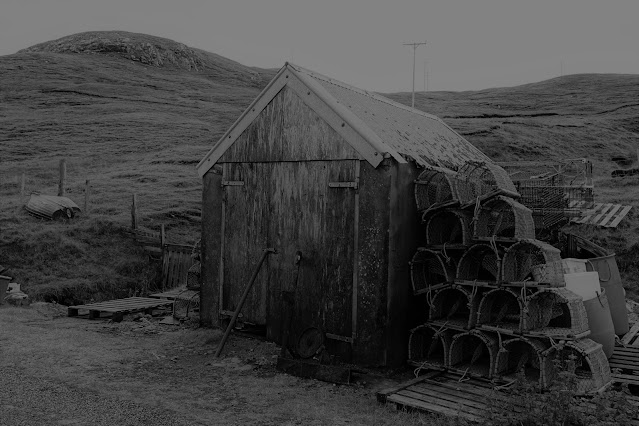 From here we checked out the line of pines and other trees at the very top of the Voe at well, Voe.  A late Spotted Flycatcher had plenty of small flies to feast on and it was so calm that you could hear the snap of its bill after each sortie. Robin and Blackbird were the only other small birds but I was actually distracted by more non-avian things with some late flowering Devil’s Bit Scabious, a funky yellow coral fungi and a very impressive lichen that looked a bit like elephant ears! 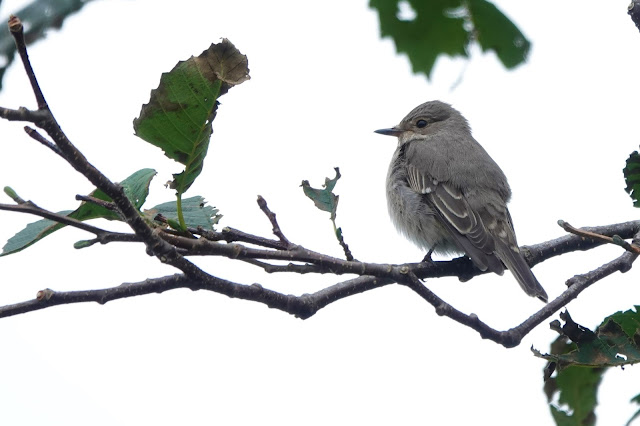 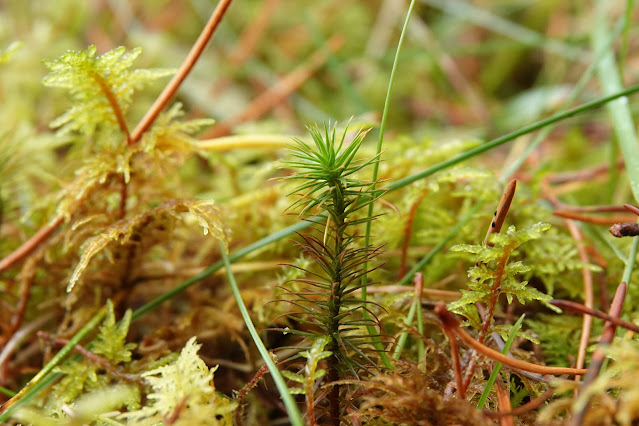 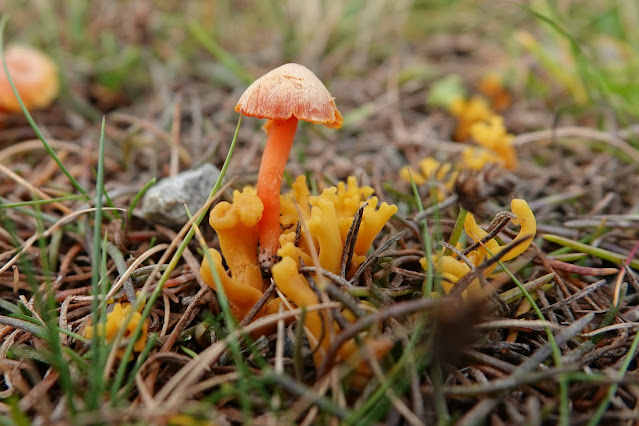 Onwards and up to North Roe (where the plane resides in a front garden) and to Isbister for a walk around the cottages at the very top of the island. We could not find the Olive Backed Pipit of recent days but it was still fun looking around and enjoying the views.  Starlings, House Sparrows and Blackbirds were ever present and a three Wrens clambered around along with the odd Redwing, Meadow Pipit and Chaffinch while a large flock of Golden Plovers spiralled in as usually happens here.

A Little Bunting had been seen in the next hamlet but again we drew a blank but the little bay held clockwork Ringed Plovers on the sandy beach and a Slavonian Grebe. A Pink-foot was on the nearby Loch of Flugarth and a Great Northern Diver was offshore at North Roe as we drove back out. 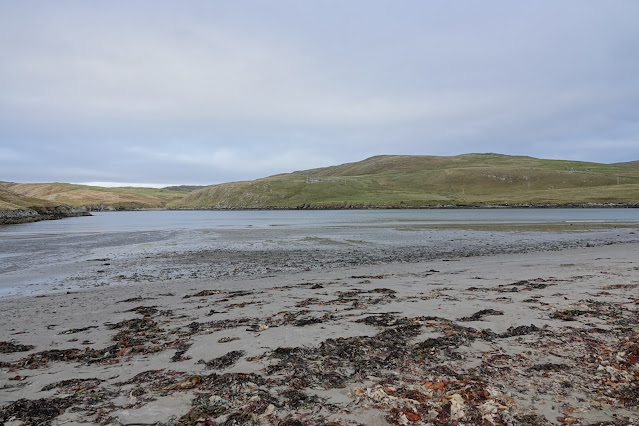 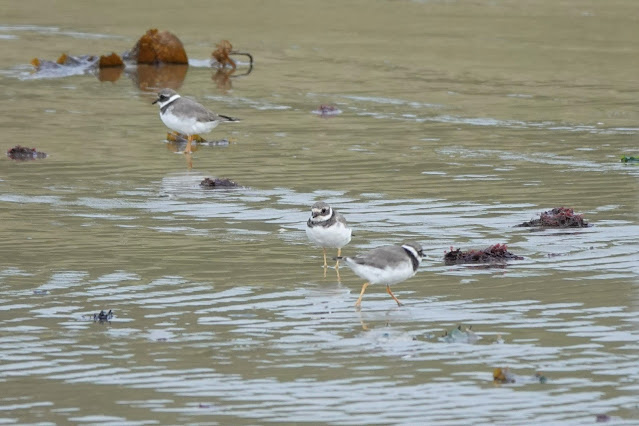 With the day waning it was decided to gamble on trying for Snowy Owl on Ronas Hill in the theory that any birds still present may be more active late on. We parked at the radio masts way up on Collister Hill which afforded huge views over the high raised bogs, boulderfields and lochans stretching way off back towards North Roe.

We judged that there was time for as yomp and so we made our way about a mile out to the north west to the next big ridge.  It was hard going at times, skirting around clear flowing streams across a frost fractured tundra landscape with peat cuts and mires.  I was very conscious of where I put my feet given the amazing low growing flora beneath me and I was easily distracted by the almost pine like Clubmosses (that Enid helped me id), lichens, sphagnum, heather and a silvery leaved little plant that Enid expertly pinned down as Shetland Mouse-ear Hawkweed. 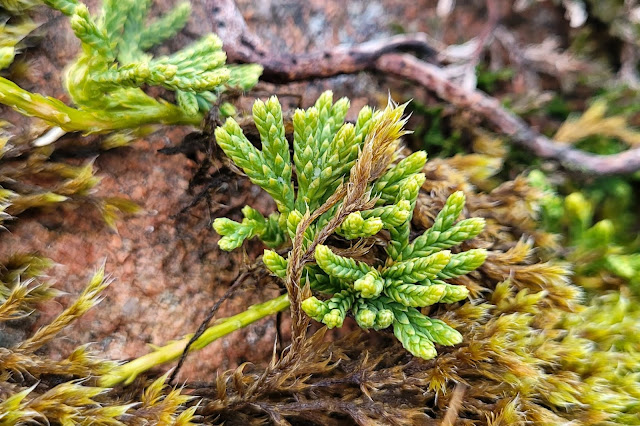 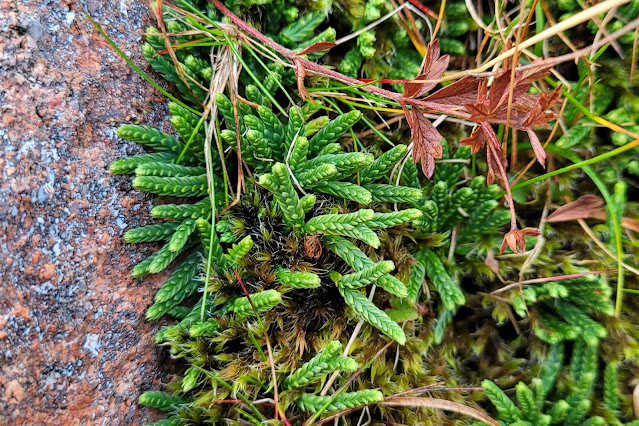 The view came and went and blowing drizzle made its way across the lower plateaux below us and fleeting rainbows followed.  It was eerily silent with only the ‘kronk’ of a Raven, ‘suuuue’ of a solitary Golden Plover and a surprise ticking of an Uber hardy Wren amongst the rocks.  We sat and watched and scanned with no luck until it became apparent that we could no longer see the huge radio masts.

It was time to head back but visibility was down to about 20m but thankfully our internal navigation skills combined with the wonders of a pointy directional arrow on David’s OS App guided us in a loop towards the car.  With no sightlines the landscape became even more alien.  I saw signs of Red Grouse and we heard one calling some way off and this was shortly followed by the ripple and tew of a Snow Bunting that came in to see us briefly before flicking back off into the cloud.  It is surprising that the species is not actually resident here and Adrian said later that no one understands why the species does not breed up there on Shetland.

About 40m from the car we could see the interp board by the roadside  but still not the towering masts!  Redwings were calling from the compound as we packed up in the last of the light and descended back to the main road at the end of a strange but exhilarating day.

An excellently cooked sirloin avec pomme frits and a fine 16 year old bottle of red was followed by fluffy raisin pancakes and finished off our self catering culinary exploits.