With the Band reunited after Peter’s solo album effort we decided to hit the Hoswick patch again and walk up to where we hoped the Bluethroat in Sandwick was. Jono and Peter headed up the burn and David and I went across the Bay and up the hill.  David disturbed an Otter from the mouth of the burn when bounded across the rocky beach and into the bay.  I would have been able to see this from my bedroom!

The weather was very quickly closing in with a belt of low cloud bringing clinging drizzle.  Forty Redwings drifted over and a high calling Dunnock was the first of the trip. At the top 80 Golden Plover wheeled into the fields before we were forced to seek shelter.

Quite clearly we were also nowhere near where the Bluethroat had been seen so Agnetha (Davi’s Swedish car…) was sent for an we trundled up the road a little way and just out of the belt of rain that was coming down the valley.  The burn was well walked and a single grey Lesser Whitethroat was our sole reward but it was added to the ‘places to check in future’ map. The rainbows were perfect and a full arch with both visible ends crossed the road above us. 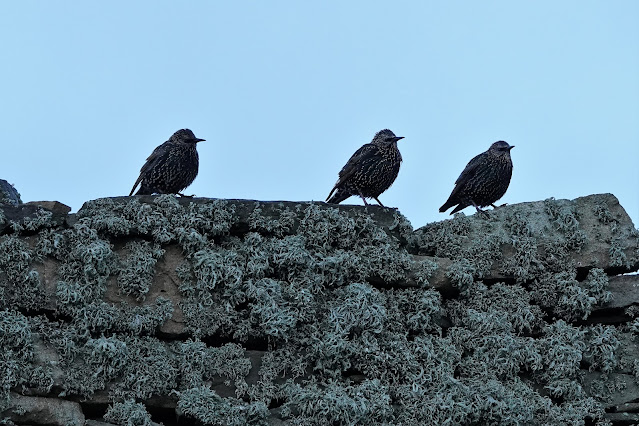 Onwards to Brake where we parked in a sensible manner at the end of the road an headed out for a walk towards some stubble fields and dreaded irises beyond. There was a fine flock of wary Greylags in the fields and with them were 12 Pink-feet, Mallard, 100’s of gleaming Rock Doves, chirruping Skylarks and boisterous Starlings.

The Doves were particularly fine as they circled around and as they banked you could see that most were in very active tail moult. A few Meadow Pipits and Twite moved ahead of us before we reached the burn and to be honest this was the only real iris walking we ended up doing all week.

About a dozen Common and three Jack Snipe were put up along with a few Redwing and a couple of Song Thrushes. Ravens called and tumbled overhead and an immature male Merlin zipped through. Way up on the craggy cliff headland clouds of Fulmars circled and were the first we had seen all week.

A male Wheatear was particularly obliging and gave Jono a proper session.  Amazing to think that it still has to build up enough reserves to get to sub-Saharan Africa while a Common Frog was quite happily sitting in an old salt lick bucket… as you do. 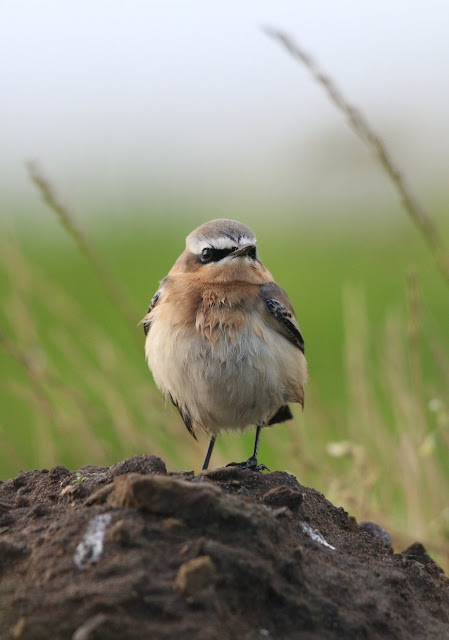 After a slight confrontation with one of the crofters who drove up to us rather hastily in his BMW who considered David’s ‘sensible’ parking to be ‘twattish’ we decided to head on down to Quendale Mill; not for more Irises I hasten to add but to have a look at the bay. 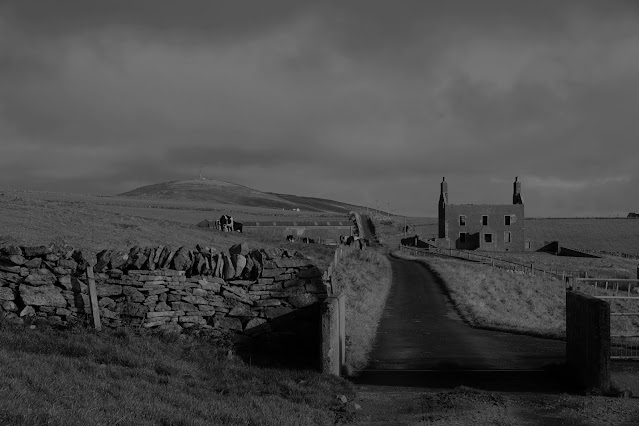 Eighteen Sanderling scuttled along the beach and two Oystercatchers were being very vocal while two Hoodies were having Guillemot for lunch.  Out in the bay two Great Northern and a Red-throated Diver were found and another Wheatear was alongside the road.  The burn below Hillwell was already being covered so we made for the shop and a hot sausage roll to keep us going as we ventured back north. 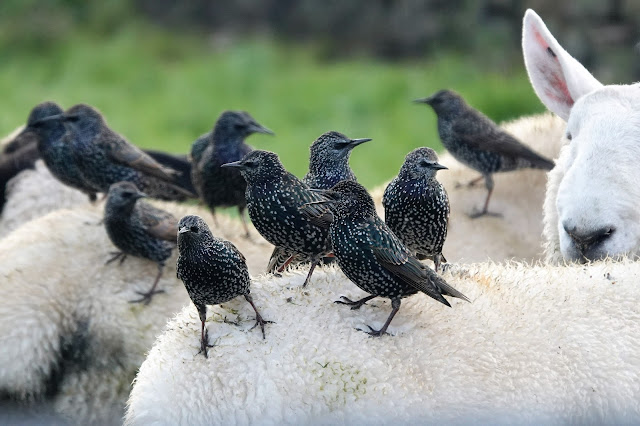 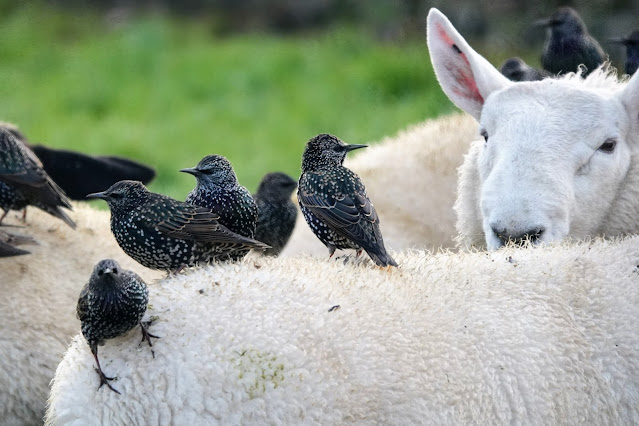 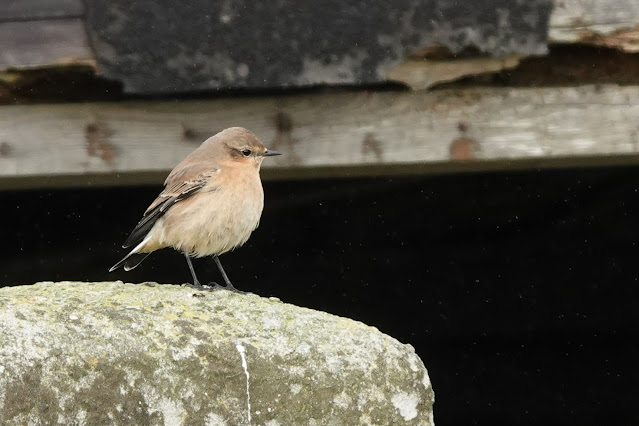 The cloud parted as we moved north and the view over the Bay of Scousburgh just passed Spiggie out to Foula was sublime as always while a blat up Geosetter only produced a few Redwings and a very cold 1w Pied Flycatcher for our troubles. 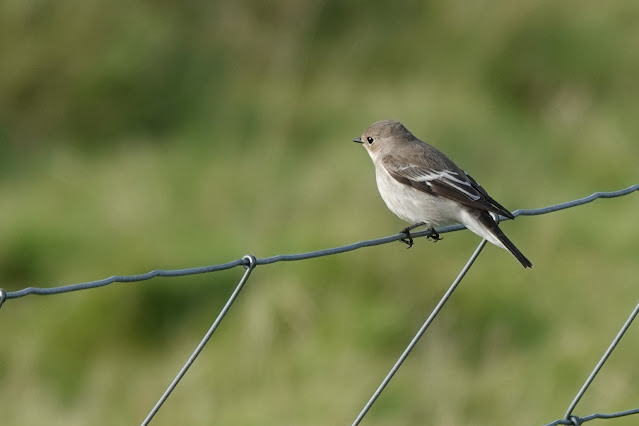 A Little Bunting had been seen at Veensgarth but it eluded us with just three Redpolls and two Blackcaps for our efforts and then the lure of the refound Rustic Bunting at Kergord took us onwards. Thankfully this time we were successful and very good views were gained as it fed along the treed ditch line below the main wood and would occasionally appear in the pines or grovelling at the base of the fence.  A well marked individual with an amazingly different profile depending on whether the drown feathers were raised or not.


After I had my fill I walked back up to the main road where five Goldcrests were noisily feeding in the canopy of the Ash trees but a chap was training hi Retriever in there so I kept walking down the road and went into the next copse to the south. I had it to myself and it was wonderfully peaceful with just the gurgling the stream and a few Redwing and Song Thrush calls.  A Robin came up in front of me and gave me a glimmer of hope and three Blackcap were foraging with a Wren.

It was time to move again and we reconvened before going out to Nesting to have another look at the Diver passing a family of five roadside Whoopers on the way. The White-billed Diver was a lot further along the road this time and further out but the light was fantastic and the sea quite calm and Peter was pleased to have seen our sum plum bird too. Four Great Northern Divers included two full sum plum birds along with a similarly plumaged Black-throat and six silvery Red-throats.  Porpoises were scattered across the bay and a female Merlin came past us at head height in an aerial tussle with a Hooded Crow. 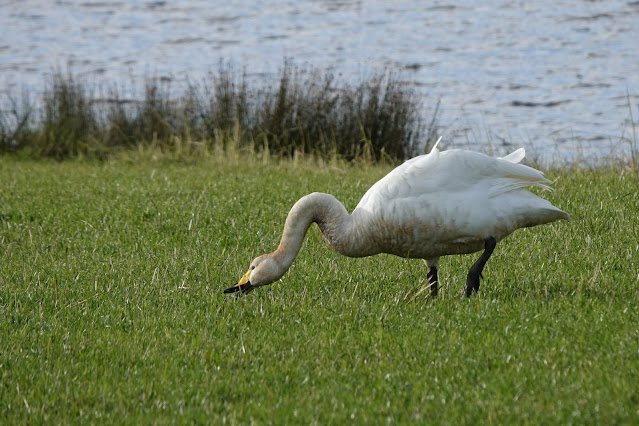 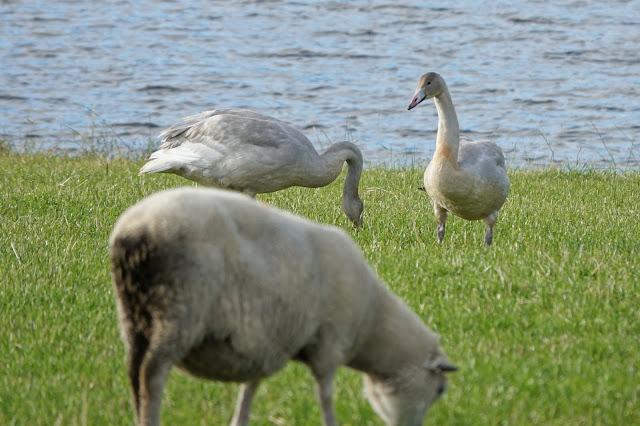 With the day entering the final hours we pushed up to Lunna passing a Greenshank and Whooper Swan on a small lochan at Vidlin.  A Dusky Warbler had been elusively avoiding people all afternoon but there are worse places to watch the sun go down.  As it happened perseverance paid off and the bird started calling right next to Peter who called us over.  It spent a few minutes secretly flicking  around in a patch of Dock stems before calling and flying back into the dense cover from whence it did not reappear thus capping off another rewarding day in the field.  Dinner at Frankie's for fine fish n chips tempted us in on the way home.