Following on from Peter’s camera trauma the previous evening, (remember the ensuing Berkshire Pudding?) he had found a friend on the island with a spare lens (as you do) that he could borrow and so after breakfast we headed back over to East Burra to swap some kit and get Peter back in a happy place.

The Disco Bus was also there and we stood around gassing mostly about what food we had eaten rather than what birds we had seen.  The copse was quiet but Brambling and Siskin flew over and there were still Mergansers, Shags and Razorbills on the Voe.

We opted on a northerly route with a view to heading out west but as we were approaching Loch of Tingwall we got a message about a Red-breasted Flycatcher. Twenty seconds later we pulled in and the bird almost landed on the bonnet. The sun was out and over the next half hour we had some wonderful views of this dapper and energetic little Flicker often in the company of a very well marked Spotted Flycatcher and a Common Redstart. A Song Thrush was seen and three Wood Pigeons were on the wires – always a scarce bird away from Kergord. 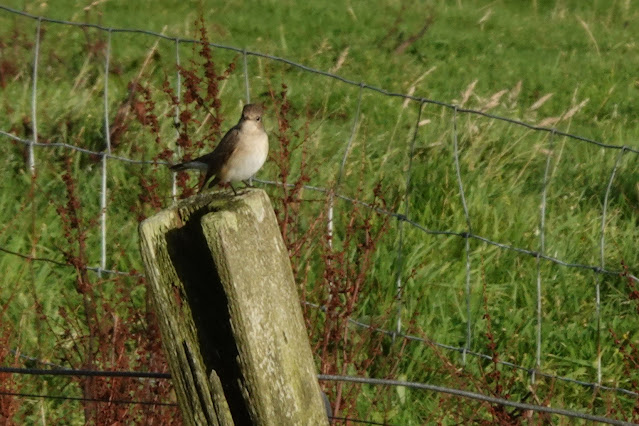 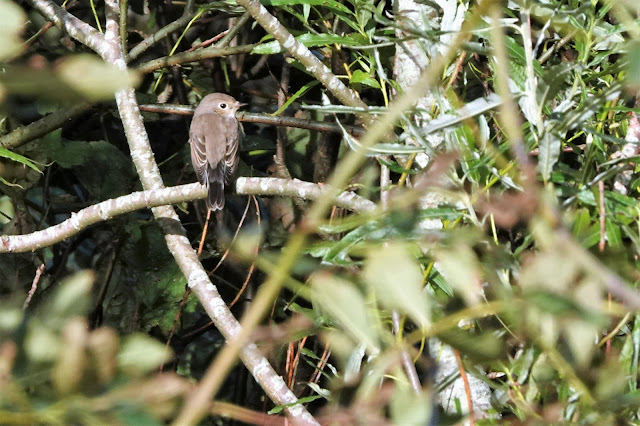 Again our plans changed with a confirmed Western Bonelli’s Warbler at Skeld (while the original bird was still stubbornly silent). We joined other searching for the bird in and around a very large garden but it had only been seen by the lucky original observer and was never seen again.  There were however a couple of very vocal Pied Flycatchers, a Robin, Brambling and a couple of Song Thrushes.

Culswick had been our destination and we eventually made it there and had a  good explore around the south side of the valley finding two Yellow-browed Warblers, our first Willow Warbler, a female Reed Bunting in the irises, two Goldcrest and a squealing Water Rail. 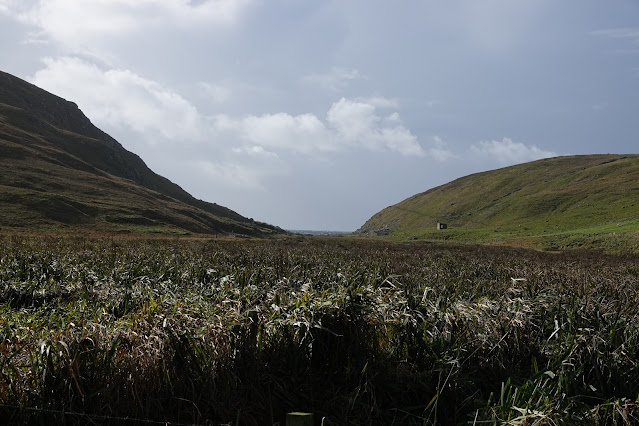 Rain was heading across the sea from the west and most of us made it back to the car before the squall hit but it gave the opportunity to grab a cup of coffee and raid the snack bag.

The Bonelli's at Easter Quarff had called and confirmed that it was Western which was disappointing for some but despondent thoughts about a lost tick were scuppered by the re-finding of the Red-eyed Vireo at Brae that was first reported two day ago.  Jono needed REV and so off we went.  AS we feared it was in the long stretch of community woodland by the school and seemingly every birder had descended on the spot.  To start with it was a bit of a bun fight with people running up and down as it moved quickly from one end to the other. I was strangely uncomfortable again with the throng despite the thrill of the twitch and stayed outside on the road for the most part, watching where people and therefore the REV were going and thus timed it just right to walk back in and find it at the top of a small Sycamore where a full minute was had with tis trans-Atlantic stray.  It was a very bright individual with glorious lemony undertail.  It flew back the way it had come and the crowd moved again but I just stood there and had a good catch up with Adrian Kettle who moved up to Yell with his family last summer.

We soon found that sitting in the Sycamore and Willow copse about half way down and being patient was the best ploy as it seemed to always stop there on it travels and thankfully this is how all our crew managed to connect with it including a very relieved Jono.  There were a few other birds in there too with a Willow Warbler, ten Siskins and five Redpolls that looked the part for little dark Lessers rather than the chunky Mealies or hulking Greenlands. 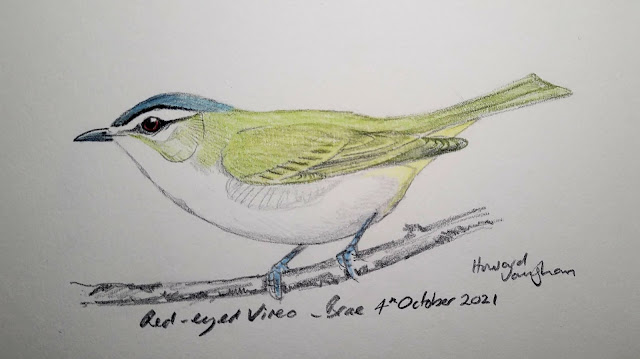 With most of the day now gone it was time to head back south with talk of Jono’s Italian Sausage Pasta leading the way but there was still time for a couple more stops with a hyper Red-breasted Flycatcher in the little roadside quarry at Girlsta and another look around Wester Quarff. The Bluethroat and Little Bunting again eluded us and the Red-backed Shrike only popped out for Peter once we had walked away but we did get great views of a Barred Warbler as it fed in a burn before it flew back to one of the forbidden gardens.  Two Pink-feet were in with the sheep and there were a Redwings and Song Thrushes zipping around which was an encouraging sign.

Retrospectively  I think we should have gone for the second REV in Sandwick as we literally missed it by a few seconds as it went to roost never to be seen again but it had been a fairly successful day and dinner, wine and beer in moderation beckoned.