It was looking like a seriously wet day was in the offing and it thus became a day centred around meals; many, many meals.  Once breakfast #1 was out of the way we decided that a bacon and egg sani would be a good move and filled the house up with the warm smell of crispy smoked bacon. More tea was required and then some digestion time before a shout at 11.30 from Jono for ‘lunch’ had us sitting around the table consuming  the remains of the mighty Italian Sos pasta augmented with veg from Jono’s parental allotment and more toms and twirls...

The rain seemed to have lessened so we waddled out towards the car for a drive down towards Loch of Spiggie so at the very least we could scan for ducks… We diverted down to Bigton to look across the sandy tombolo to St Ninian’s Isle.  It was wet and windy but some cramped scanning gave us a full sum plum Great Northern Diver, Red-throated Diver, a few waders and two new trip birds with five (?) Goldeneye whizzing by and a diminutive Slavonian Grebe.  Getting out was only to take scenic windswept shots of the vista and to rescue a bedraggled Bunny abandoned in the verge… it was that sort of day.

It was even wetter at Spiggie and we sheltered behind the RSPB shed in the car park and peaked out at the Whooper and Mute Swans and small numbers of diving ducks. Pleasingly the Tufted Ducks had five Scaup with them (m, 2f, 2imm) as well as four Goldeneye and three Long-tailed Ducks. Another Slavonian Grebe was seen further out and Coot and Moorhen were also new, making it five floaty/watery species to add. 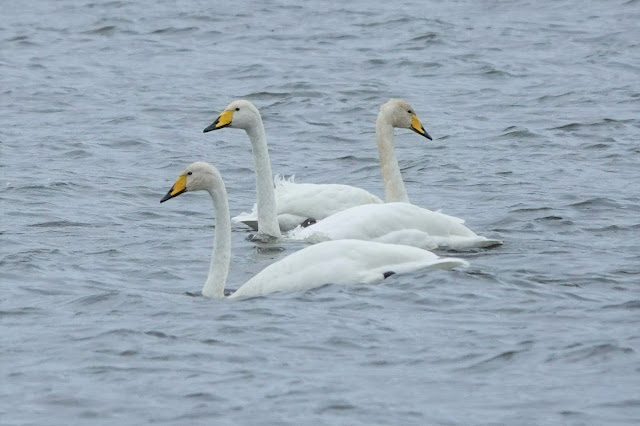 We re-visited the Wagtail fields at Noss which were still full of birds with a Black-tailed Godwit amongst the Starlings, Rock Doves, Mallard, Skylarks and Snipe but it was too damp to get out so we moved on and drove out onto West Burra and the small loch at Papil where we scored big time and found the female Gadwall out with a small Wigeon flock.  The excitement was palpable and we felt the urge to dip into the Snack Bag of Happiness for chocolate sustenance.  Three of us even got out of the car to look… Snipe and Jack Snipe were also seen before we retraced our steps and stopped at Bridgend to use the recycling facilities in the harbour.

A lovely Tystie was fishing just below us and the rain had just abated enough to get the camera out.  Jono does like a low angle shot and walked slowly down the slipway into the harbour at which point it became true to its name and we watched helplessly as he gracefully slid while standing up towards the harbour below. Thankfully he had the presence of mind to place his camera above his head and leave it behind him as he assumed a horizontal position and continued his inexorable slide to further dampness which finished with water up to his knees.  It was just lucky that he had his wellies and waterproof trousers on and somehow stopped before going fully in.  We thought we would have to find the life buoy to haul him back up but somehow, by walking like a very blue Penguin, he managed to get back to the top unaided.

Relieved at the lucky escape we retreated to Hanmavoe where Team REV had found a beady eyed Rosefinch earlier.  Simon Papps and Roy Woodward were watching it as we arrived and it was feeding contentedly on some seedheads not to far away so at least we did not have to hunt for it in the rain that was just starting up again.

And with that we headed back to Hoswick where a chicken stir fry was on the cards for dinner but no, Jono had a craving for some local hot smoked salmon to go with a lovely bottle of white he had brought with him so we stopped at the Mackenzie’s Farm Shop in Cunningsburgh and came away with salmon, cured red deer sausage and a lemon which became our first dinner of the evening.  It could hardly count as a snack. The Chinese then followed some time later and we all retired for the evening way beyond replete. 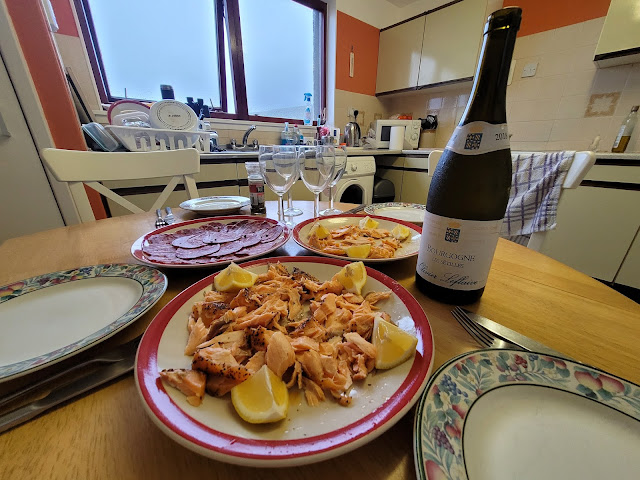