It was quite a troublesome weekend all round with one of the cats requiring expensive overnight treatment at the vets coupled with my car throwing a ‘Safe Mode’  wobbly as I was rushing to said vets.  Peanut is back home and doing ok but my car was still poorly so yesterday I dusted off my Essex passport and remembered my tablets for altitude sickness to get back over the Bridge and headed to Rainham to see my mechanic this morning.

The roads were empty and this is my first venture out at rush hour for some considerable time.  With the car dropped off near Rainham Steel I headed north and towards the Beam Valley for a wander. My route took me initially into what I believe is called the Mardyke Open Space.  It is a basically a piece of very rough grassland with paths cut through it dotted with exercise equipment.

Given the grey and gloomy conditions I was not surprised that there was no one there but there were birds with 25 Linnets and two Reed Buntings moving between a couple of scraggly Hawthorns and the rank grass. 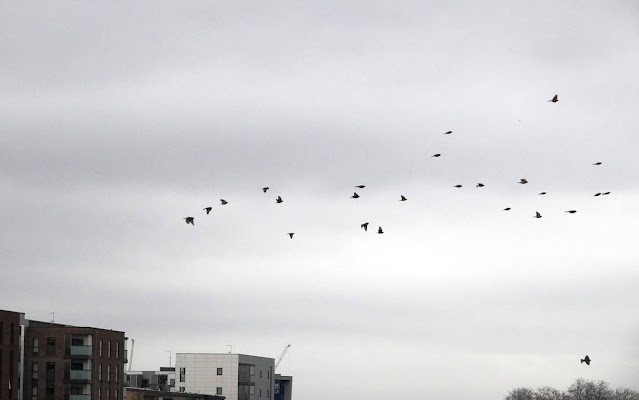 A pair of Stonechats popped up but a female Sparrowhawk appeared above and they had disappeared completely when I looked back down.  She was given grief by three Ring-necked Parakeets and also soon moved off but a Song Thrush was not detered and belted out from a Poplar top and a gang of Carrion Crows came off the fenced in and grassed over mound of the old landfill site next door.

A Pyracantha by the exit was duly checked for moth mines and was smothered in Phyllonorycter leucographella which was not overly surprising. I cut through the renamed Orchard Village with its smart newish flats and some every strange fruit related street ornamentation! 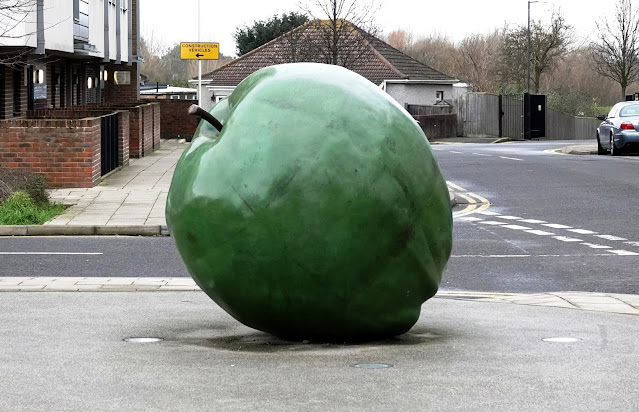 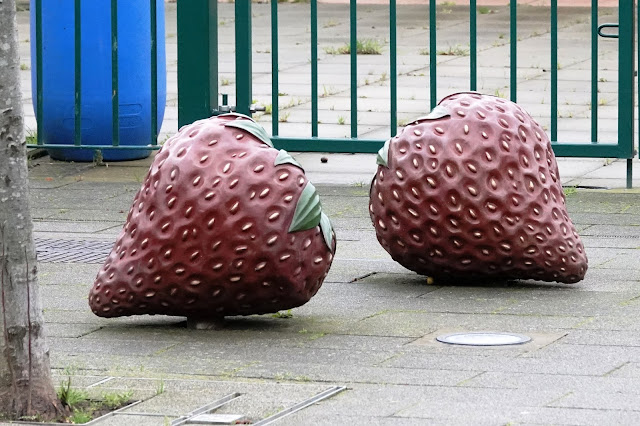 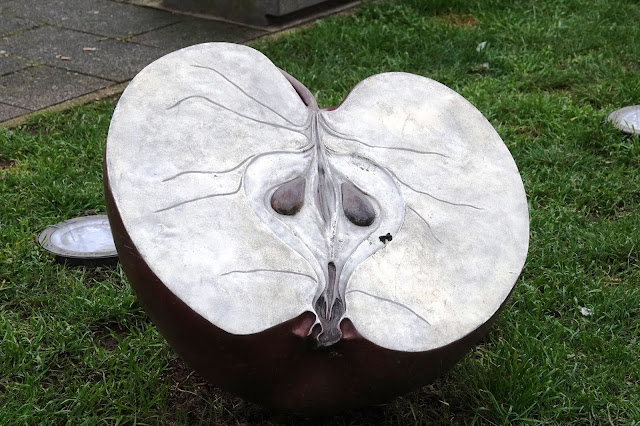 From here I found my way into the Beam Parklands which would allow me to head north again. I have not been into this still young greenspace for a good few years and was in fact at the official opening many moons ago. It is now a superb area of pools and dells with mature Willows and Poplars and stands of scrub with the currently fast flowing Beam River winding through the middle. There are proper pathways but almost everything was still under water and mud but I picked my way through. 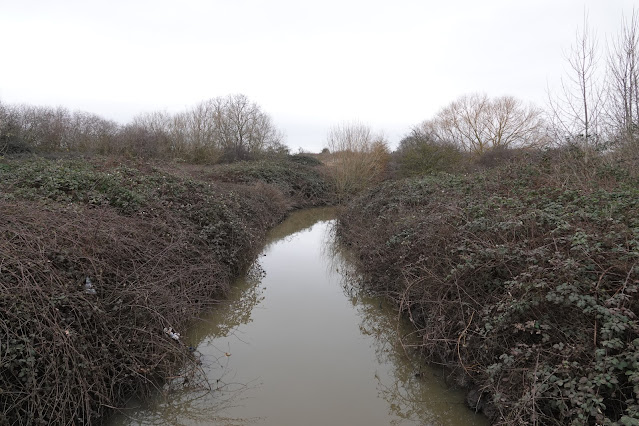 Three Little Grebes were holding their own in the strong river current and there were Coots, Moorhens and Mallards dotted about.  A male Cetti’s Warbler was proclaiming his territory and I should imagine that the whole area is great for scrubby type warblers come summer. 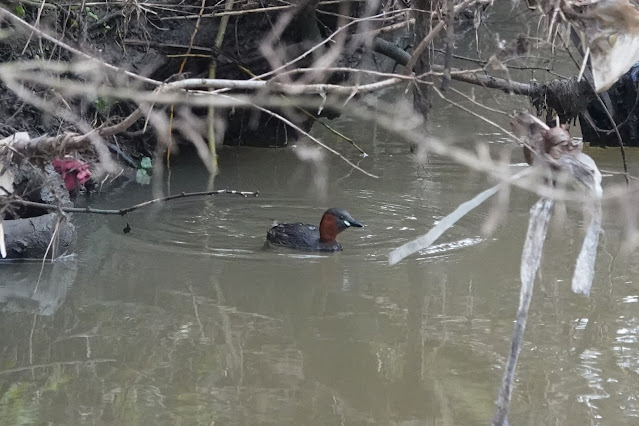 Ring-necked Parakeets  careened around and (sorry) but seeing them always makes me smile while I counted six singing Song Thrushes on my way through. 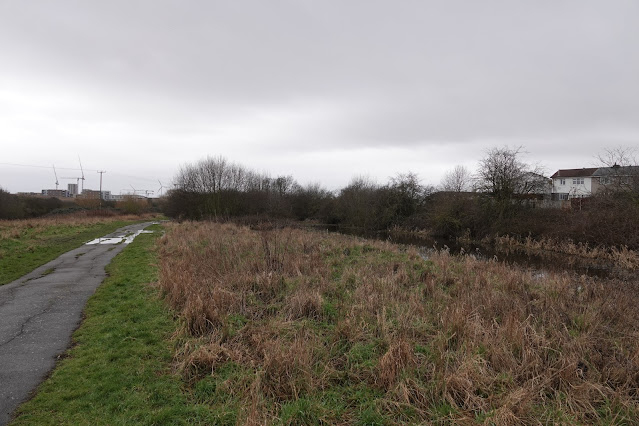 I casually checked the Brambles for the inevitable Stigmella aurella but could not find a single mine despite acres of the stuff!

I popped out on Rainham Road South before crossing into the next section of park which I have always called Bretons Farm. The paths were even wetter here and I wished for my wellies so that I could have not only stayed dry but could have ventured off piste to look for Snipe and such like. 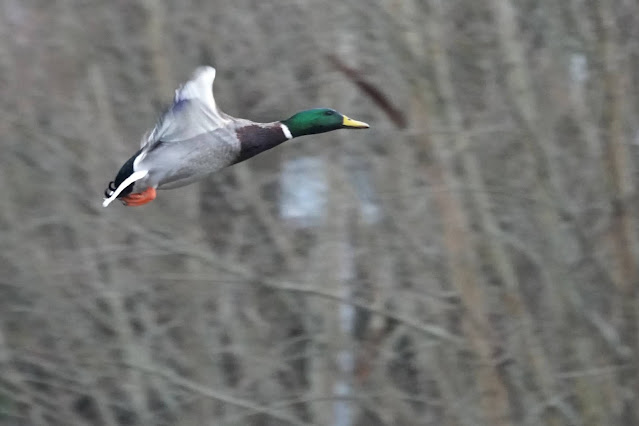 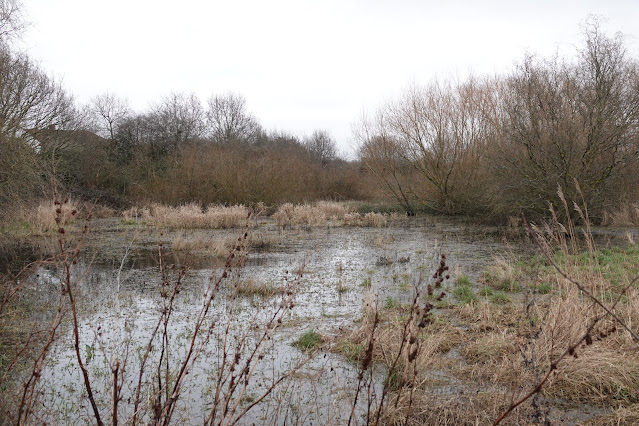 No one must have been over there as there were still Teal, Mallard and Moorhens close to the path and two Water Rails ‘kipped’ at each other from different reedy patches.

Green and Great Spotted Woodpeckers were encountered and watched Parakeets investigating a hole in a Willow. Even the Rabbits were still out but not for long as the heavens opened and the camera and the bunnies went away.  I trudged around for a bit finding a smart solo male Stonechat and a few dashing Redwings but my ambles through the copses produced no Woodcock although I did find Phytomyza ilicis on the Holly there and Phytomyza chaerophylli .  I circled back to the main lake where I could hear loads of geese and found a few Tufted Ducks and a solitary female Pochard before the call came to say that my car needed a part and would take some while longer. 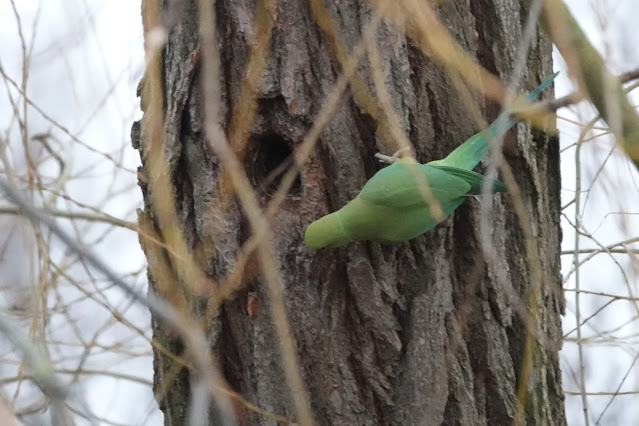 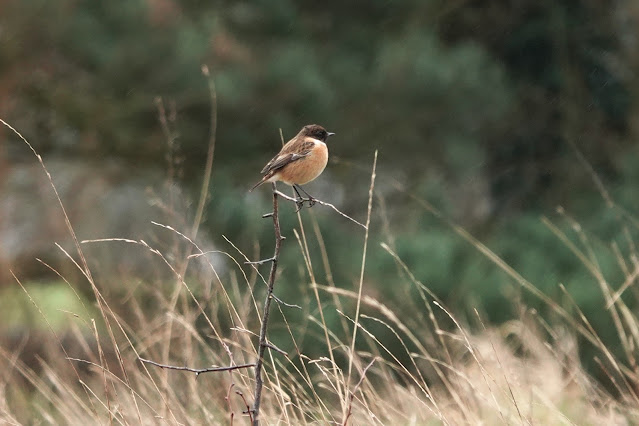 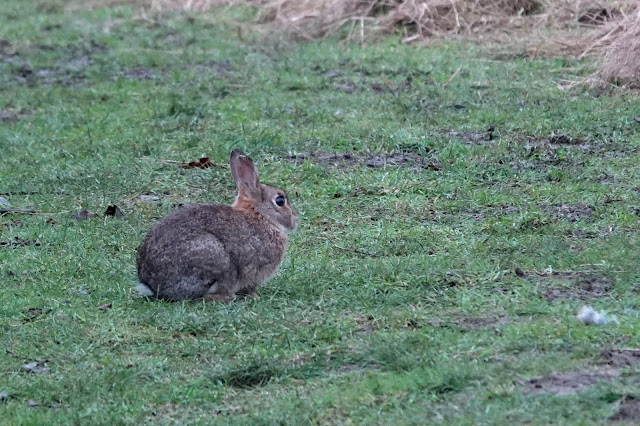 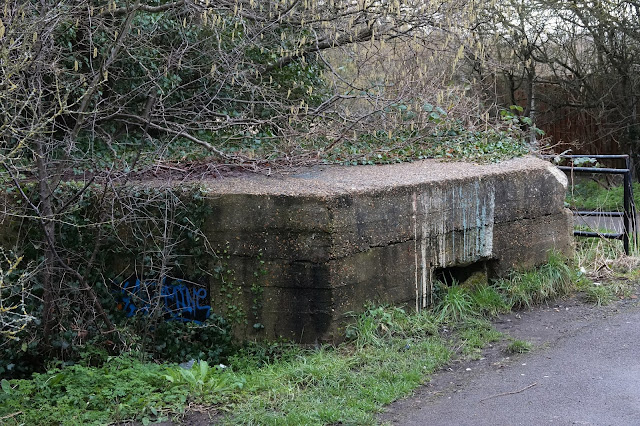 I turned around again and went back north passing 66 Carrion Crows out foraging on the playing fields. My route took me out onto the Rainham Road for a short while before I dipped back into Dagenham Chase in the far south east corner. The Beam was racing here and there were no Grebelets to be found. 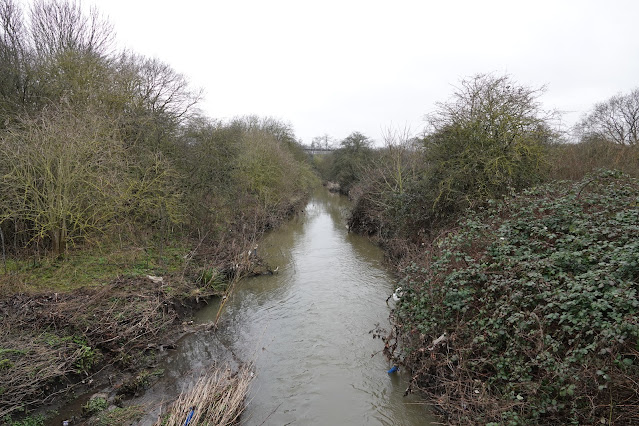 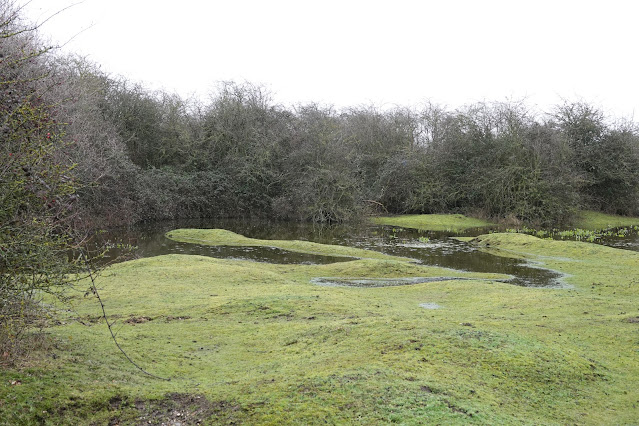 I spent quite a lot of my early solo birding at the Chase in the late ‘80s to mid ‘90s and it still holds many great memories and as I slid and squelched my way towards the Slack flashes of moments both rare and common came to mind. A great warbler flock one autumn through that patch and a male Pied Fly one spring over there by that corner, a May Honey Buzzard with Vince from here, an October Hawfinch munching rosehips and the first sighting of the Great Snipe on the 2nd June 1989 as it came up in front of us on Crowfoot. 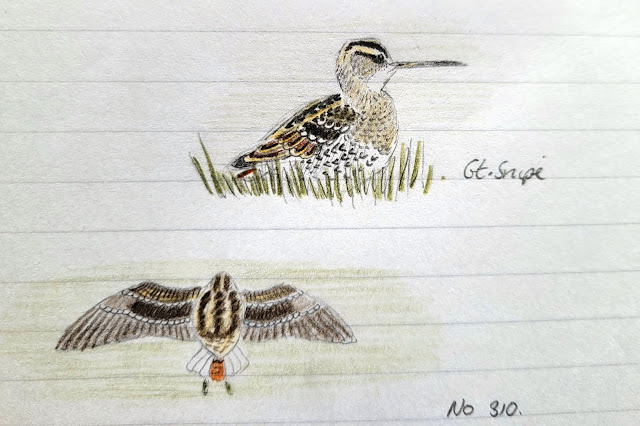 I got to the Slack and was impressed by how good it looked especially now there is a fence with wire to stop dogs from running into it but a gap at the stables end to let in the all important horses. 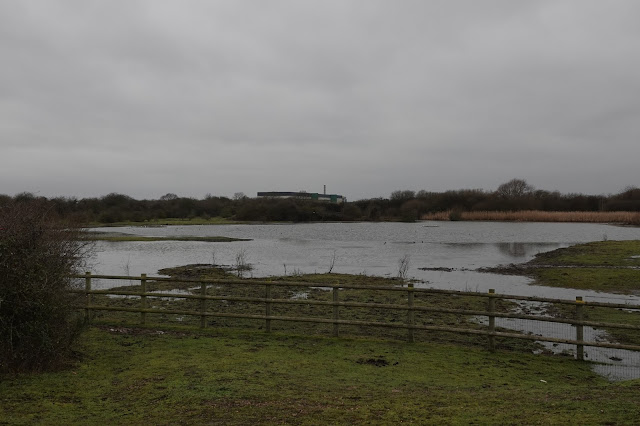 I had not long passed an old spread of surface shingle where Paul Hawkins and collected barrows full of the stuff to help the warden create an island in the middle of the Slack for Little Ringed Plovers in on the 29th March 1989.  They were settked in on it by the end of the very same day and it was pleasing to see it still in situ albeit with just a few loafing Herring Gulls.

I remembered an autumn Nightingale on the bank to the left of me and a Woodlark running between the dried horse muck one october day when a Hooded Crow also flew over but although I do recall it often being a bit wet and muddy I can honestly say that I can never remember it being quite so disgustingly so! There was no path anywhere that did not require wading through a quagmire of mud, water and miscellaneous horsey deposits.  I did my best to stay dry but in the end just gave up and waded through to get to the view point overlooking the Slack from the east side although I did put up a Woodcock in the process! 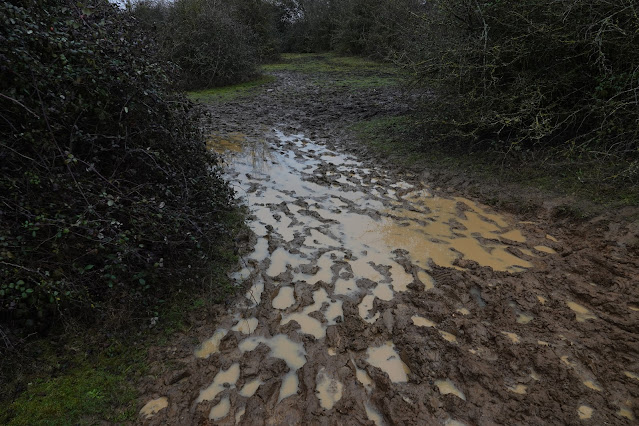 Sitting on the bench was not really an option but I could see a good flock of Wigeon, Teal, Gadwall and Shoveler and a single Shelduck was having a bath.  A flock of 34 Lapwing were invisibly spooked and circled a few times but I did not see on Snipe. I imagined Ken Barrett with his little wiry terrier at his side sitting there with me watching the comings and goings on a spring morning.  It all seems so long ago now and to think that it will be 15 years on the 19th March since we lost Ken at Rainham on the first White Stork day.

But there were still more Chase memories to come; many with Ken and some with Roger too. I could see where the Spotted Crakes skulked with Water Rails along the back and where a pair of Garganey spent over a month in ’96 and as I moved on I could see the Black Poplars near where a Willow Tit sung its heart out one afternoon and Lesser Spotted woodpeckers were a given.

I waded down towards Mint Pond where the Great Snipe was re-found and the strip of land between it and the next pond where the famous male Pine Bunting spent the start of 1992. I can clearly envisage Dom Mitchell hawking the sparkly new first issue of Birdwatch in the car park. I got to share a tiny tent hide with Robin Chittenden one cold morning and get my own pics of this fabled bird. 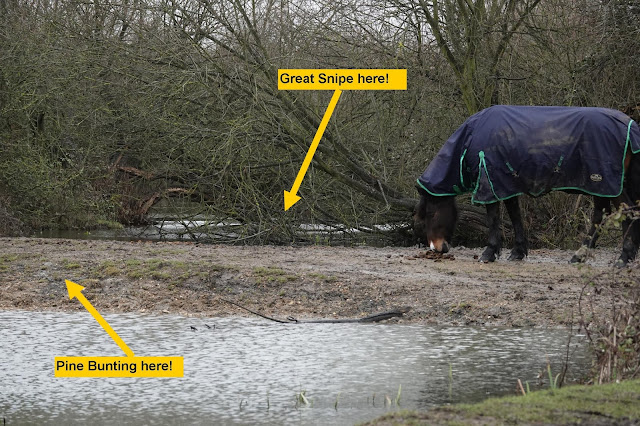 The hedge behind that was one of the Long-eared Owl roost areas where I think 11 was my highest count and the dip down through the willows was my other favoured spot although I was more intent on not falling flat on my face this time than standing and idly reminiscing! 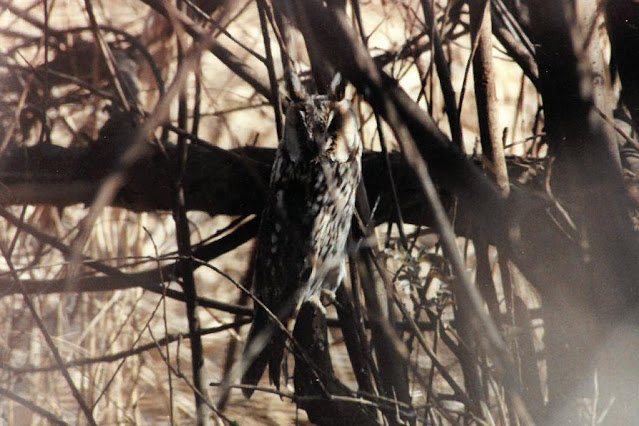 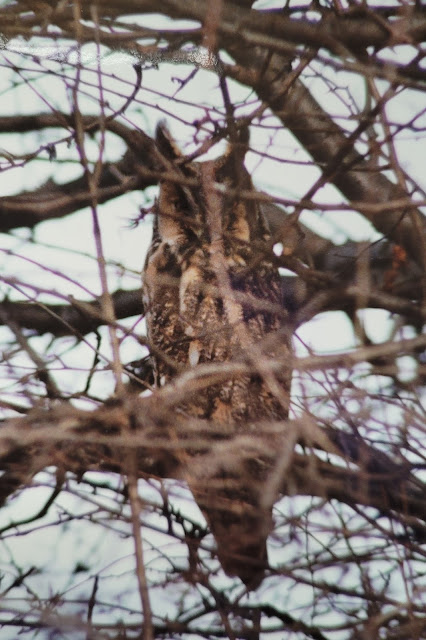 I cut through to Fels Field but I was too wet and muddy to consider circulating much more of the reserve and so with my car now ready I looped back to the Upper Rainham Road and headed back south on the nice dry pavement...