With spring at my beck and call in 2020 I threw myself back into my garden and as you may have seen from my blog posts, I attempted to reinstate my vegetable garden, planting Potatoes, Broad and Runner Beans, Tomatoes, Onions and Cauliflowers.  However, I had not really taken into account the leaf cover of my upper garden once the season got going and to be honest most things (Tomatoes aside) were not great and my best crops were Pots and Carrots grown in tubs further down the slope.

As such I decided that I would try and turn as much of the top third of the garden into a Woodland floor with winding path, rotting logs and small pondlets. My original plan was to start at the very top of the plot and clear the ancient dilapidated greenhouse frame first but I really do need another pair of hands with that and since November hands have been somewhat unavailable.

So, plan two was to start just beyond my block ‘shed’ and work up.  I had already begun to plant a few bits and bobs out in the Ivy on the left (Stinking Iris and Wood Spurge) but having cleared all of the brush from the autumn I had a fairly blank canvas to start getting creative. I already had a hole where I had dug soil last year to bank up the spuds and this just happened to be the perfect size for me to drop my old fibreglass pond cascade pool into.  I then banked up the soil into a ridge around it and imagined it covered with woodland flora. 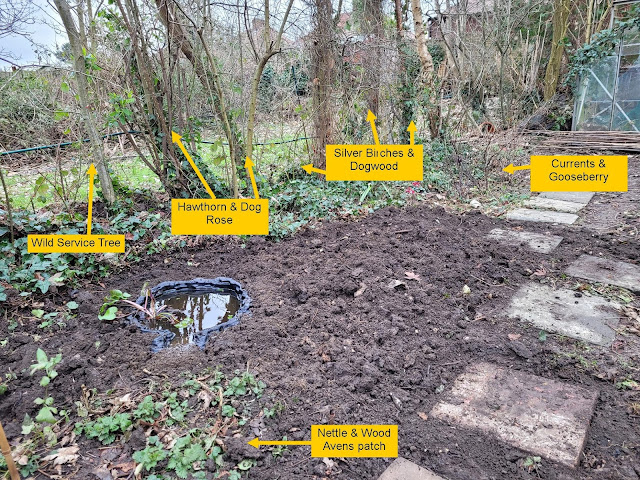 I like my ferns and so started by removing all the smaller specimens from my pond area which get swamped by the bigger ones and was even able to divide some of these up further while one of the big species yielded four new plants once I cut up a removed section. These I put closest to the hedge where they would not over grow much else.

My Celandine and Violet patches further down the garden were the next to get split up and as I am not too fussed about it all being native I also moved some of my Arisarum proboscideum that was just starting to show through.  This little arum has curious mouse tailed flowers and should make a good show in springs to come.

Whilst out on my walk on Monday I found a big pile of moss of a variety of species at the side of Crutches Lane where a roof and driveway had been cleared and two visits have seen me collect enough to make the areas look a little more natural.

On Wednesday I turned over the plot where the Pots and Caulies were and created a similar feature and augmented it with some 18 year old Leylandii timbers and that were piled up at the top of the garden after the purge on the garden back in 2002 when Dad and I removed about fifty 10m high trees lining both sides of the garden! It was nicely rotten in places but still amazingly tough in others and fits in well with the woodland floor theme.

I poked in some more of my stashed plants and popped a bit of Marsh Marigold into two of the pondlets, complete with some Ramshorn Snails.  Ian and George my  new neighbours to the left bought the house in the summer and had asked the council to replace the old decrepit Chestnut palisade fencing between them and the other side with a standard panel version.  As such I blagged some of the best bits on Thursday, partly for a project at work (should I ever get back there) but also for a little pieces of rustic screening behind my creations.

Today was surprisingly nice with blue skies nearly all day and I probably should have gone for a walk but I decided to push on with the project. Just beyond my left hand ‘woodland bed’ were two Red Currents and a Gooseberry, none of which did that well close to the hedge so I carefully dug them up and replanted them around the Raspberry patch which gets more light.  This left me with another area to play with so I dug out some more Ivy and popped the huge Elder log I had saved down the middle.

More Fern dividing and planting out will give me some structure at the back and I popped in another pondlet too as well as some relocated Lords and Ladies.  I then placed another little piece of fence at the top and wired it to the Birch tree and even managed to coax the Dutch Honeysuckle along the top.  A third piece then closed off the Currents and Raspberries using Hazel wands as stakes to hold it all in place.

The lads next door had also very kindly given me permission to raid their lawn for Primroses so I returned with two buckets of plants which were liberally dotted around all three beds and tucked into the hedge bank too.

It is all starting to come together and I just need to move some of my Woodruff up the garden and a few Teasels to put along the back and the first wave of spring show should be well on the way.  I just need to plan ahead to ensure that I have something in place for when the first flush of spring dies back so that it is not just a few ferns to get me through the year!

I shall leave you with a one minute tour! Had to load it to YouTube as the file was a bit big!

There will undoubtedly me more to come!