As the weather was nowhere near as bad yesterday as forecast, I pushed on with the next section of the woodland floor project up the garden and so this morning I decided to head back up to Crutches Lane to fill another bag with the big pile of Moss (and a Liverwort) that had been dumped after a roof and driveway clearance.

Unsurprisingly it was grey again but at 12c it was very mild.  I made my way to Rede Common where a Collared Dove on the way made me smile with its chosen perch and the Columbine House Sparrows were demonstrating the importance of the classic front garden Privet hedge.

Goldcrests were noisy as soon as I entered the Common and a patch of Dog Violets were starting to bloom amongst the Ivy on below. Redwings were calling and Song Thrushes were singing heartily as I cut across to the second long glade.

I could hear calling Crests and they felt like they might be Firecrests so I approached closer only to find a pair right at the front of the hedge where they were feeding low down in the Brambles.  I say feeding; the female was trying to but the male was in full on strop mode and was flaring his crown at her and singing his microscopic heart out. I was mesmerised but at least I had my camera out this time although once again the light was very poor.  I was hoping to get both birds in the same shot but the chances of two Firecrests stopping at the same time was a forlorn hope! He chased her off back into the Hawthorns after a few glorious minutes and I continued on y way over the top. 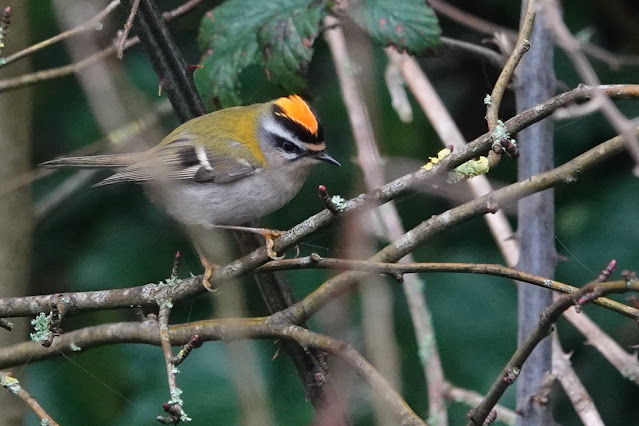 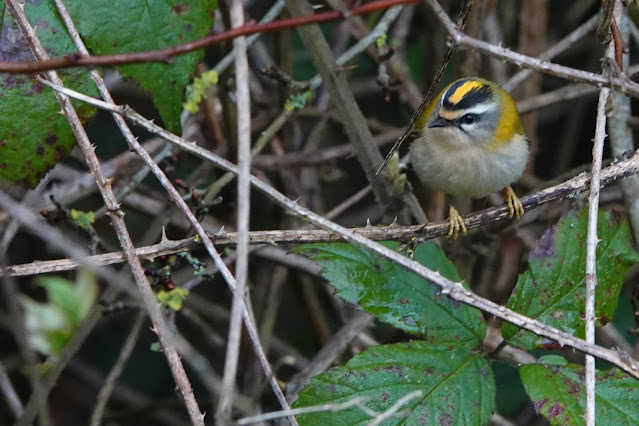 As I walked down Crutches I found a superb Japanese Quince (Chaenomeles japonica) in flower with almost blood red flowers and I can remember having one growing back at Mum and Dad’s and that Mum used to make quince jam in the early winter from the rock hard fruits. Although the fruits are very similar looking and the taste seems the same, these are not the same species that produces the huge apple sized fruits that grow in Nancy’s garden in Lesvos and that you can buy here in the autumn. That is the tree - Cydonia oblonga.


My Moss was still there and the pile had in fact grown so I reduced it somewhat and carried on down the lane where a seriously distressed caravan had been dumped to add to the already huge piles of fly tipped debris.  Some observant passer-by had left a rather helpful note on the side for the local council to investigate... 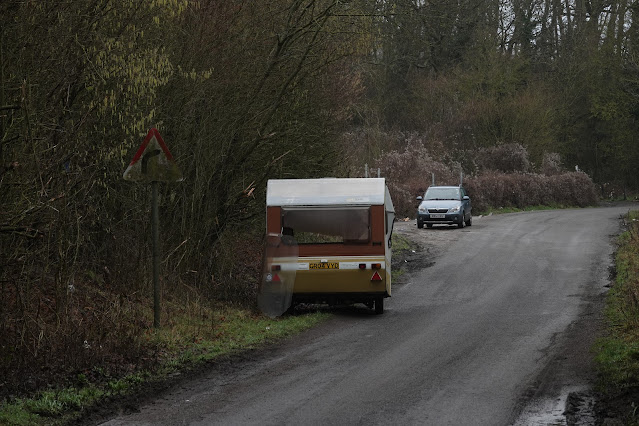 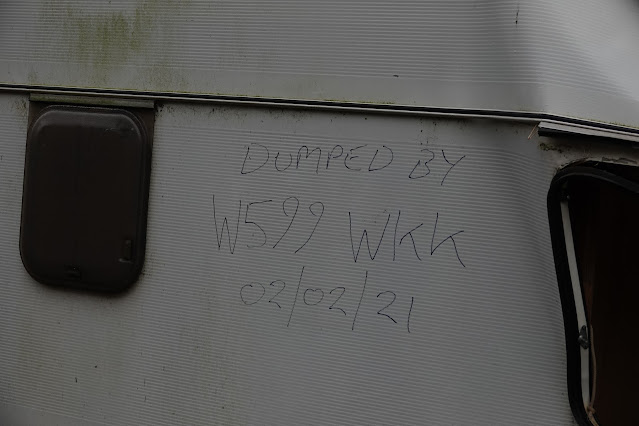 I could have turned round at this point but decided to at least do something of a circuit so I carried on along the Great Crabbles Wood lower path once again where the only addition to my previous walks was spotting a pink flower way off in the woods. On investigation it turned out to be Hybrid Hellebore that was just coming into flower.  I thought that these cultivars were sterile so just how it got where it was in anyone’s guess! 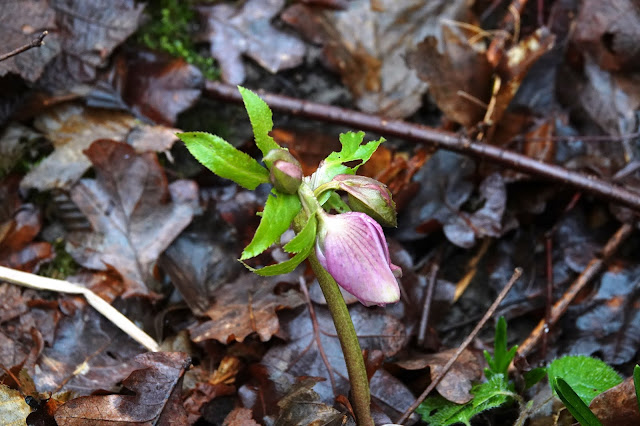 I tuned left on Bowesden Lane where the Redwings were still squabbling in the Ash trees and followed the cycle path alongside the noisy A2 and then over it and onto the seriously muddy footpath alongside the CTRL.  I spent more time looking at my feet than into the shrubbery and as soon as I got to the path that would lead me back into the woods and up to the north east corner of the Cobham Woods enclosure I eagerly took it. 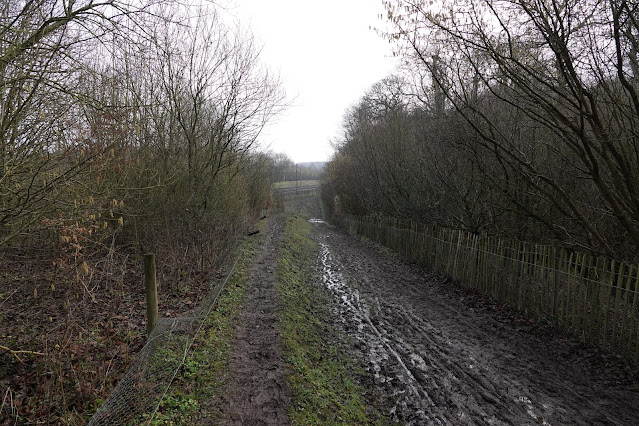 This section is largely Ash and was actually quite busy with woodland birdlife with Nuthatches, Great and Green Woodpeckers and several singing Song Thrushes.  The path was not much better and was hard going as the path started to head up the hill away from the railway. 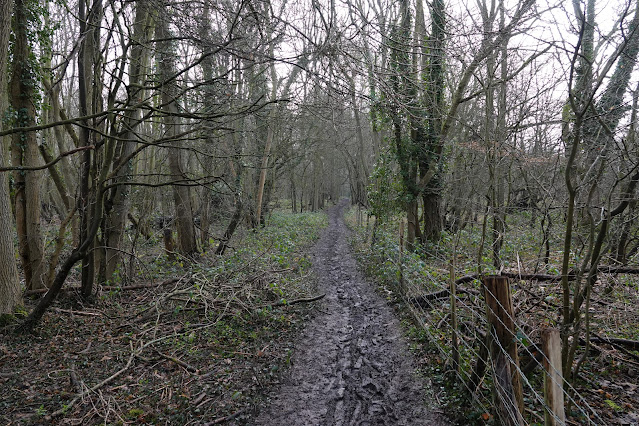 And a little video of a worm making its way across the path - fascinating to watch!

When I got to the end of the trail I stood for a while and took in the sounds around me; even the A2 and occasional Javelins faded behind the mournful singing of a Mistle Thrush, the more vibrant repetitions of three Song Thrushes, the sneezing Marsh Tits not too far from where I had them on the 25th, two drumming Great Spots while several Siskins and Lesser Redpolls bimbled over. 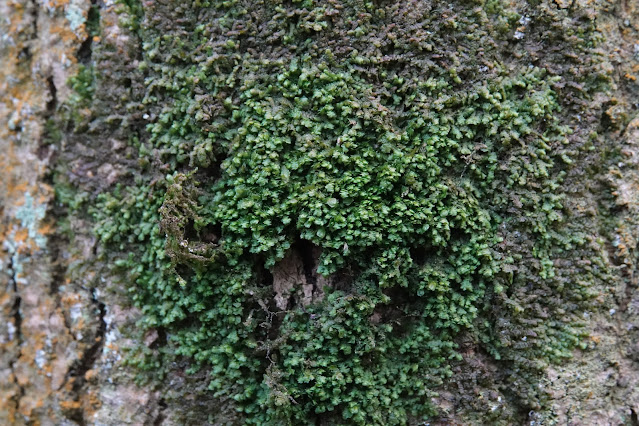 I could hear a dog Fox barking off in the woods and I suspect it may actually be the first I have encountered here.  I took the path where I had the young Tawny Owl back in the summer as it hoped it would have been less travelled and therefore easier for the climb back up to the main path. Thankfully I was correct and made it through without too much effort before hanging a left for the oh so familiar route back home trough the trees of Ranscombe.