Another day of gloom and drizzle dawned in North Kent and the Monday morning enthusiasm was somewhat lacking but I eventually got the still damp boots on and headed up the road with no great idea of where I was going. Goldfinches seemed excessively cheery with singing birds all the way up my road illustrating just how far this now common garden bird has come.

I continued all the way to the end and avoided the turn into Ranscombe only to be mildly distracted but a lichened concrete bollard – as you do! I headed for Crutches Lane and actually put the camera away as the drizzle was getting persistent but there was not really much to tempt the eye although I was very please to find a huge pile of moss that had been dumped in the verge.  The house opposite had a newly bare roof and I suspect  it came from there so I stuffed some (well quite a lot) into a carrier bag for resettling into the beginnings of my woodland floor experiment up the top third of my garden but more of that another day. 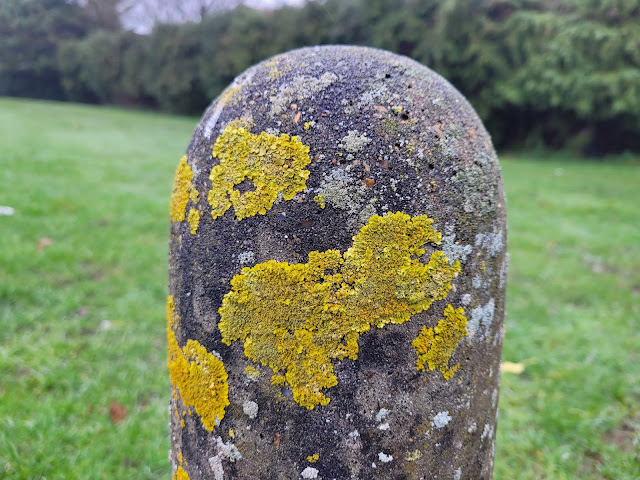 I stayed on the main muddy path through the edge of Great Crabbles Wood where some fresh Jelly Ears and some curious little Orange Brain Fungi caught attention.  The Bluebells were really pushing through well now and Dog’s Mercury was flowering in places.

I turned into Bowesden Lane where a cacophony of Redwings were sub-singing in the Ash canopy with Goldfinches for backing. Further up the lane where the Holly fringes the big houses I got lucky with Firecrests once again with two buzzing males about a hundred yards apart and a second bird with each which is encouraging.  One came right out in the open with crest flared and sang his heart out but the drizzle was still falling and I decided to actually just watch his energetic performance rather than attempt to get the camera back out. I did manage to record him with my phone though and technically he is sitting in view in the middle but the song was well captured!

I turned left on Peartree at the top and then cut down the first narrow alley footpath between the houses and followed it to the end where it entered the soggy paddock that I discovered back in the summer.

The ponies were in another field this time as I sloshed my way across to the far side where about 80 Redwings were feeding in the paddock before dashing back to the cover of the hedge where more noisy babbling could be heard although a Song Thrush was belting out above my head and trying to drown them out.

I cut straight across the main ride and into the Randall Wood part of Shorne CP. This was new territory and seemed to be made up of very damp Birch and Chestnut woodland. Nuthatches and Great Spots called and I found a great tree that the woodpecker had been systematically destroying. You could even see the bill tip marks where it had been searching for grubs. 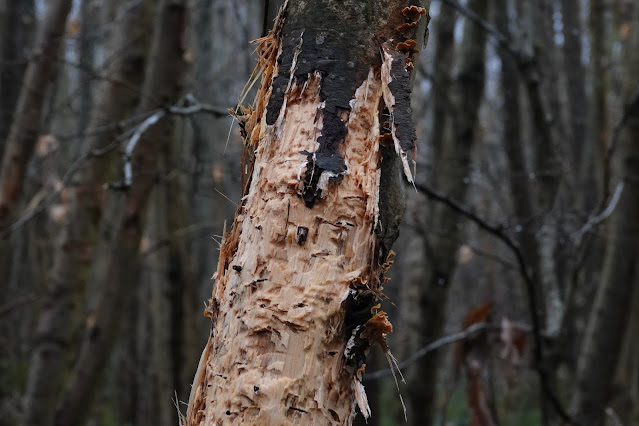 The paths here were in the worst state of any I have come across. Not just muddy but churned up but excessive foot and bike traffic.  I am not complaining about people having the right to go out and explore and exercise but the damage being done off the main paths were people in inappropriate footwear have blazed new (now equally muddy trails) through the woods on either side will be all to visible later in the spring. Where Bluebells were trying to push through there was just inches of pulped humus and sloppy mud. I was so muddy that staying on the main drags was not a problem but quite how I did not tumble I do not know.

I reached a small clearing where the vague outline was visible of the Cobham family home, Randall Manor until its demise in 1361. A Mole had been industriously rotivating the area and there were some nice Ramalina lichens that had come down from the Oak with the old house outline.

The stream behind was rushing and gurgling through the trees in a most un-Kentish manor and it took me a minute to realise what I could hear. 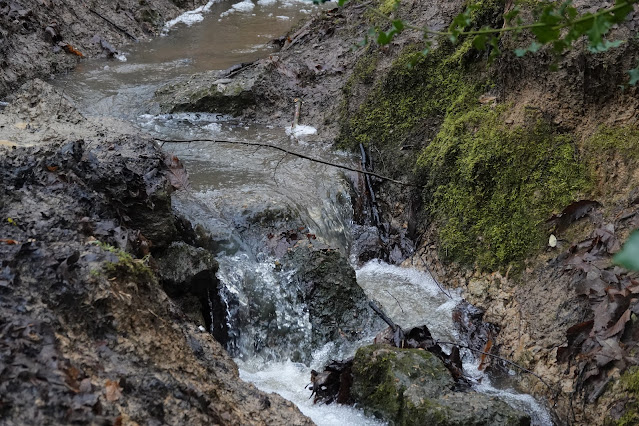 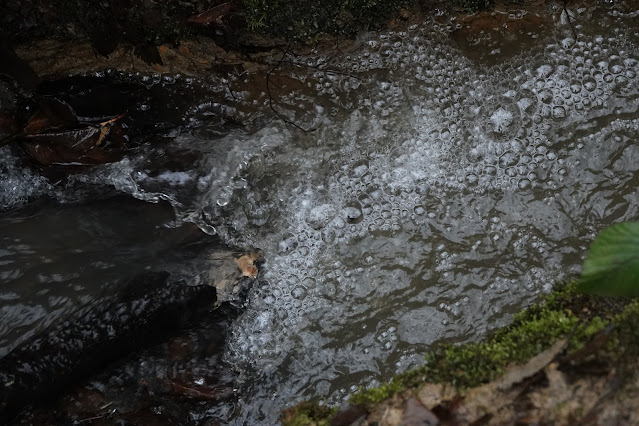 I pushed on through the mud but picked up nothing else of note until I reached the exit to the public footpath that took me back down to Shorne Istead Lane where a large flock of Redpolls and a few Goldfinches were feeding in some Birches. The light was tricky but I persevered and picked up at least two Mealy Redpolls with this Lesser flock.

The Rhododendron tunnel felt dark and almost tropical but alas there were no Ant-thrushes or Tinamous creeping through the leaf litter. I popped out onto the lane where a very wet but huge view was on offer out across the North Kent Marshes to a gloomy Higham Bight.

Eighty Rooks (including some immatures) were poking about the soggy field and a flock of Stock Dove circled in on lavender wings while two Red-legged Partridge were the first I have seen anywhere in this section as they scuttled across the ridge with heads bobbing.

It actually felt good to be back on tarmac as the woodland section had been so treacherous. I followed it to the end and turned into Thong Lane that would lead me to the bridge over the A2.  Jackdaws were gathering in the garden tree tops and all the old houses had walls adorned with mosses that were bejewelled with individual water droplets attached to each fruiting capsule. 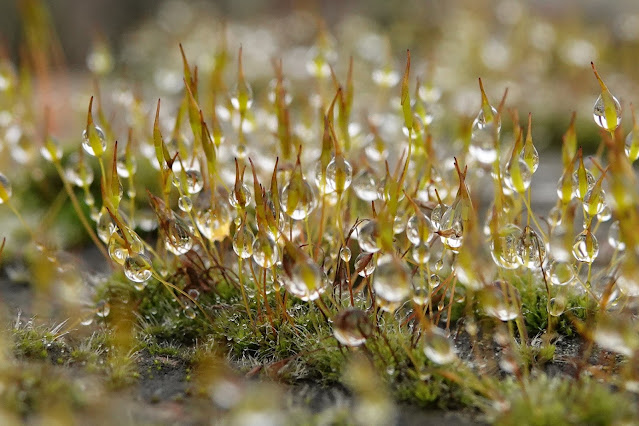 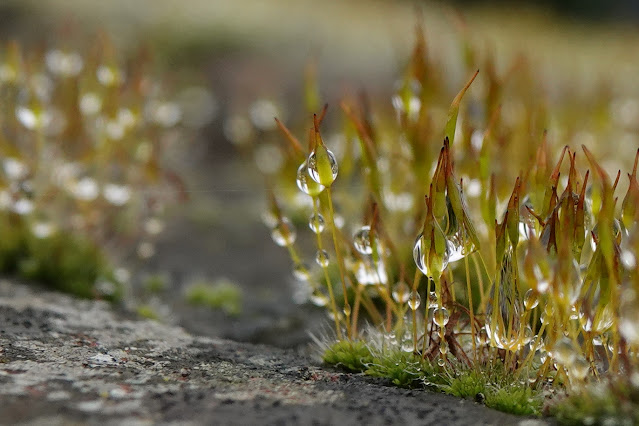 The view opened out to the west where I presume part of the Option C Thames Crossing route will come through.  The horses looked truly miserable in their muddy paddocks and Buzzard sitting on the fenceline did not look much happier! 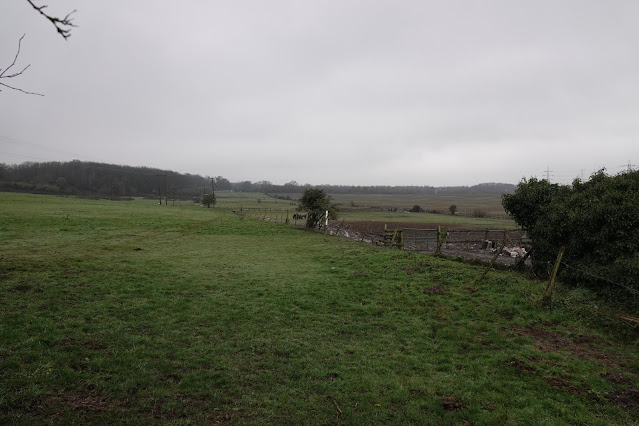 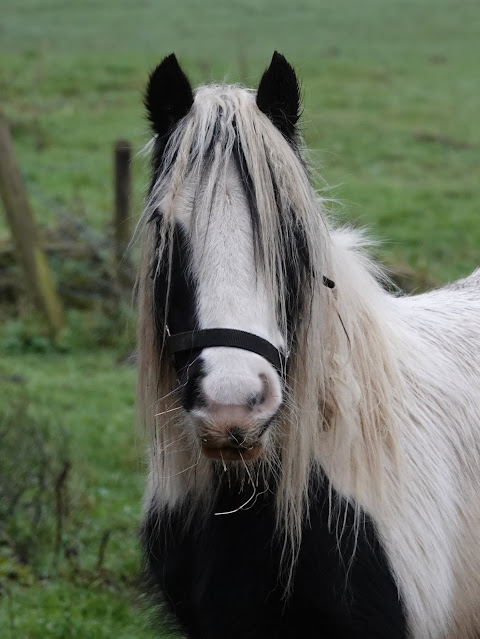 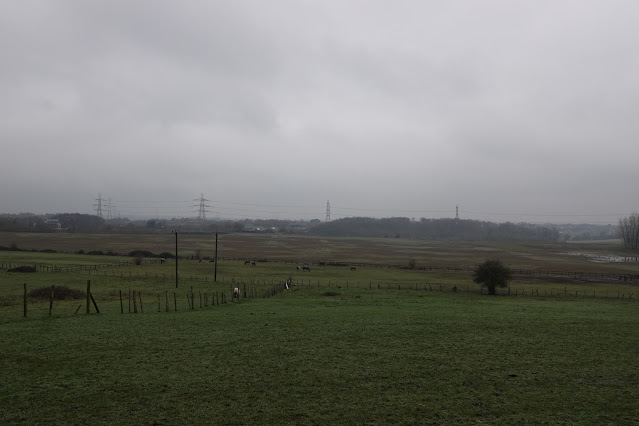 At one particular bend in the road the verge was littered with a positive graveyard of wing mirror parts and hubcaps and this lane is one of my least favourite driving diversions to use!

A female Bullfinch perched up briefly and three Ring-necked Parakeets were circling the bit of Shorne Woods that I normally see them in. I always try and look in at the lake just before the main road but viewing is difficult and as usual it was only populated by three Cormorants and a couple of Mallard. I always think it looks great for Mandarin! 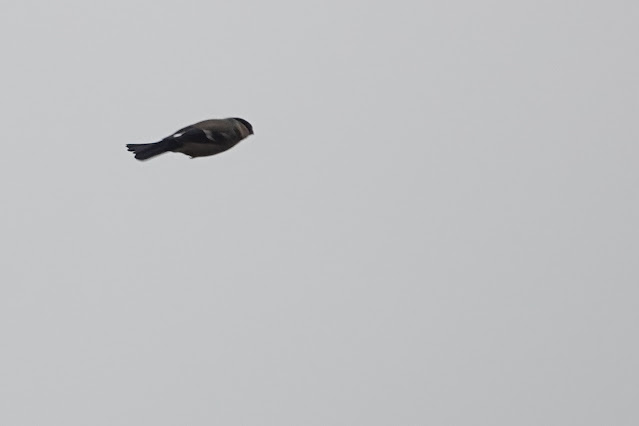 I crossed the main road and turned into the track to Ashenbank but those pesky Lichens once again drew me to them and I think I found a bit of a Cladonia hot spot with several species present – I think – although I shall await some more knowledgeable input! 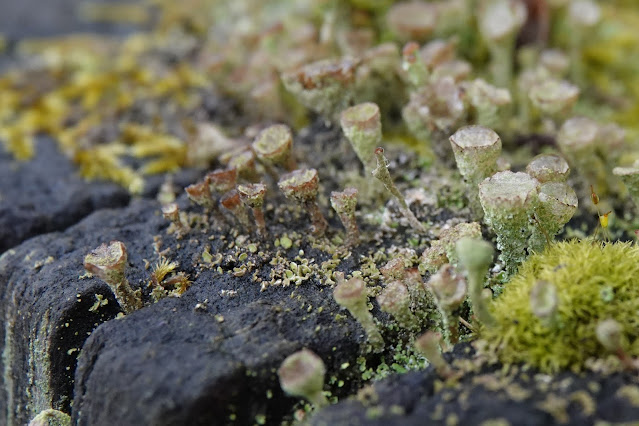 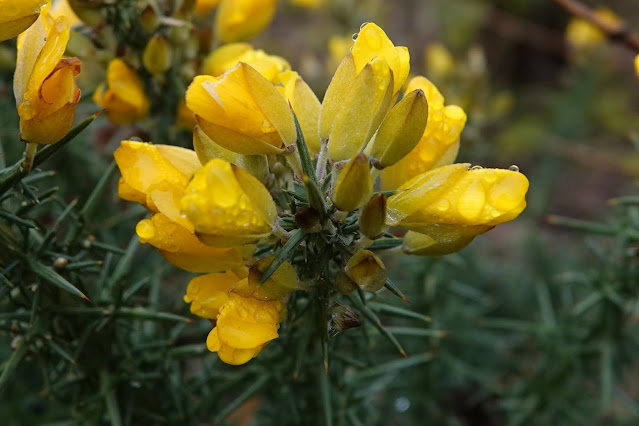 From here I slipped down what I call the Ramsom Track towards Jeskyns.  The Wild Garlic was already pushing through but like Shorne the banks have been well trampled by people trying to avoid the mud.  I did however find two lovely displays of Scarlet Elf Cup Fungus to go with the Pixie Cup Lichen just a few hundred yards away. 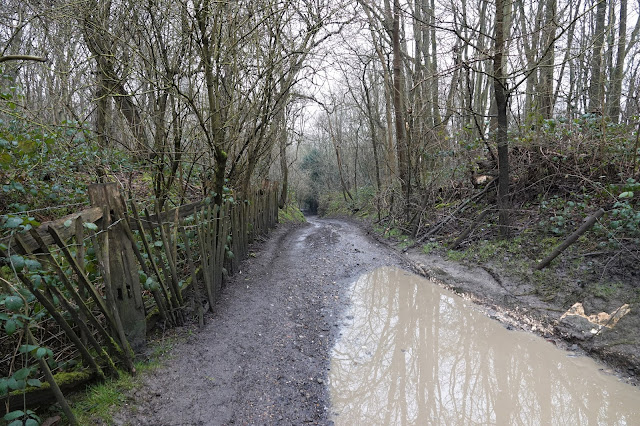 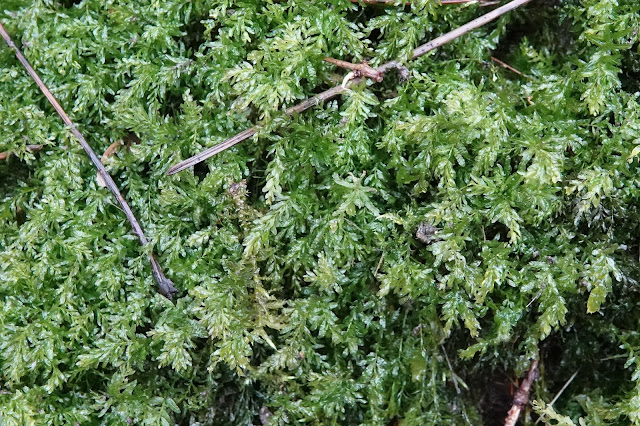 There was now almost no light as I skirted the wood and plodded up the hill to Cobham village.  Blackbirds dotted the wet path and as I crossed the cricket pitch you could hear the ground almost fizzing as air was escaping through the millions of worm holes. 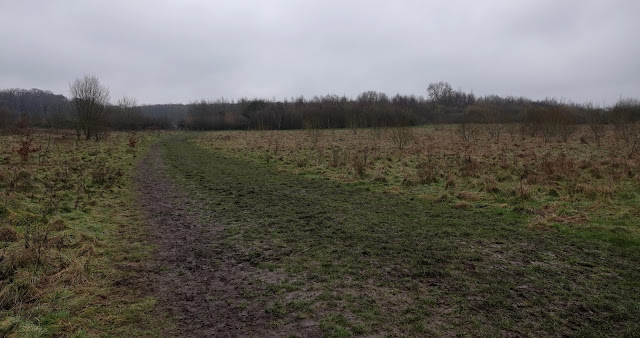 From here it was a straight run back through the Cobham Estate and into the woods.  The Lime avenue was just starting to bud and the trees all had a purple cast to them and then in the distance I spied a white shape in a field. It was the White Hart, all by himself out grazing. He was well over a mile away but my route took me a little closer and in my camera I could just make out the makings of a new set of antlers for the year ahead. 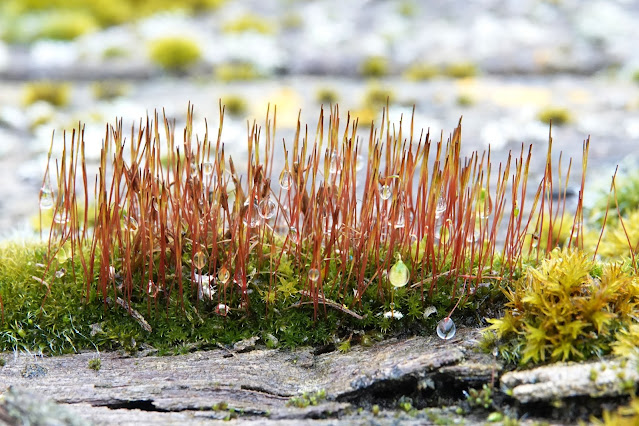 Cobham Woods were a now a little busy for my liking with lots of young families in big groups getting interestingly close to the Highland Cattle so I deviated onto a path less travelled and came up through Elephant Tree further on and carried on downhill to home. 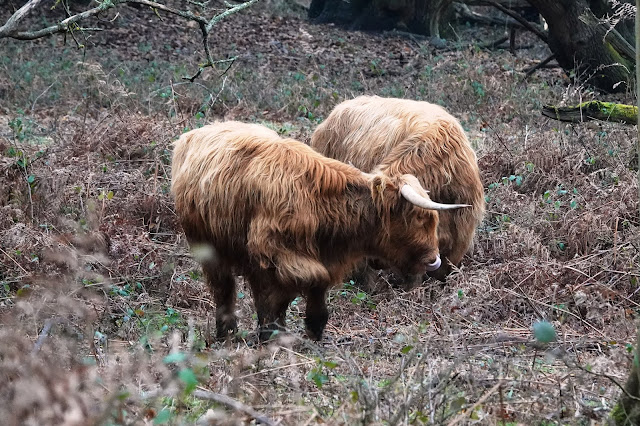 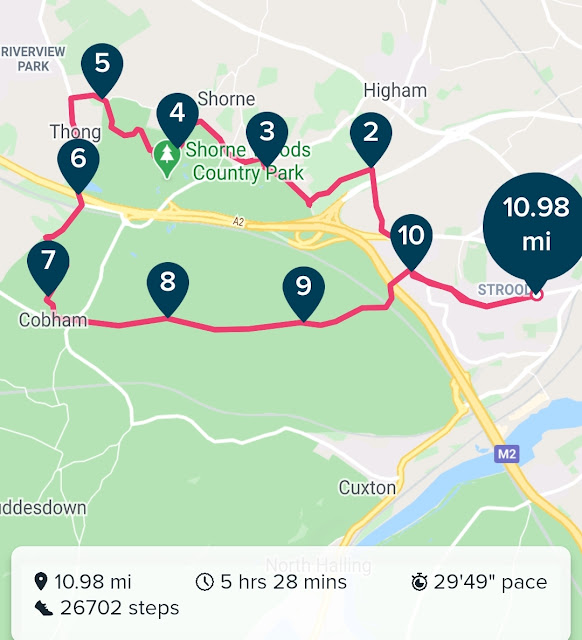