I had a full day in the garden yesterday where I was still tinkering with the top third but I did get to see my first returning Med Gulls of the year cruising over ‘cowwing’ wondrously. Both were still in winter plumage.  My diggings disturbed a very large Queen Bombus lapidarius who I tried to point in the direction of the Primrose flowers.  She was already carrying a small army of hitch-hiker mites.  Down in the pond the Frogs were vigorously at it and I suspect that there will be heaps of gelatinous spawn before the end of the week. 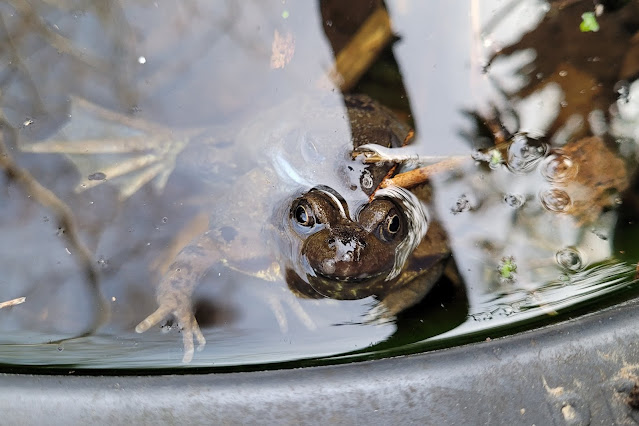 And so to this morning where my body said that I should really have a rest day but my mind shouted at me to stop watching Aerial America and get dressed and go out!

I decided on a Ranscombe circuit again but opted to come in from the eastern end.  I stopped to check out my local Peregrines on the way and they waited till I had almost left before revealing themselves.  I think the male had made a kill and was happily eating breakfast before his other half realised she was missing out and noisily turfed him off the ledge to finish off the scraps. Fingers crossed for another successful year. 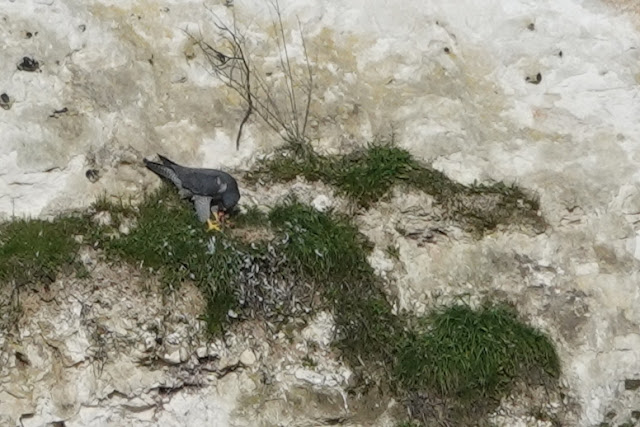 I was greeted by a full car park with people getting shirty over gaps so I hastily made my way up to Longhoes where a cloud of gulls were descending to follow the plough that was giving this wildflower rich field its annual refresh.  I watched the lads for a while as they speedily turned over a long strip down the middle but I am not sure if they whole field gets done like this each year. I sat and watched the gulls as I could hear Meds amongst the throng of Black-heads and Commons and sure enough I soon picked up several dipping down for a newly revealed snack.  A few Magpies and Crows joined them and two Pied Wagtails came and went. 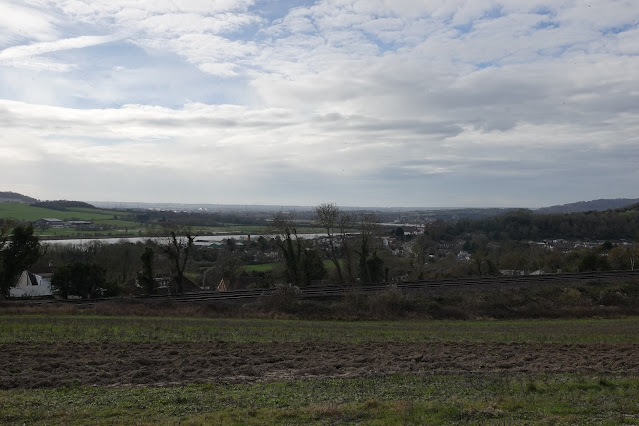 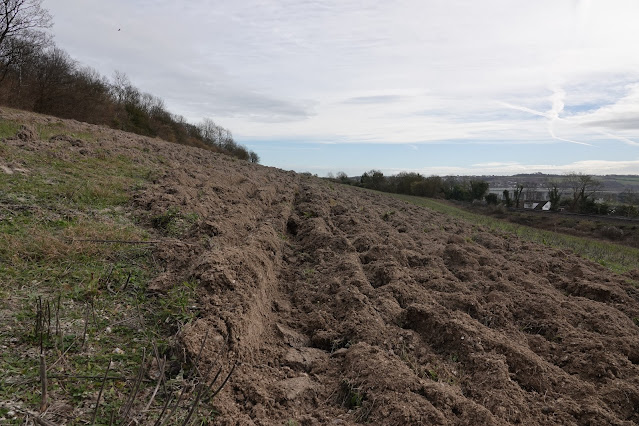 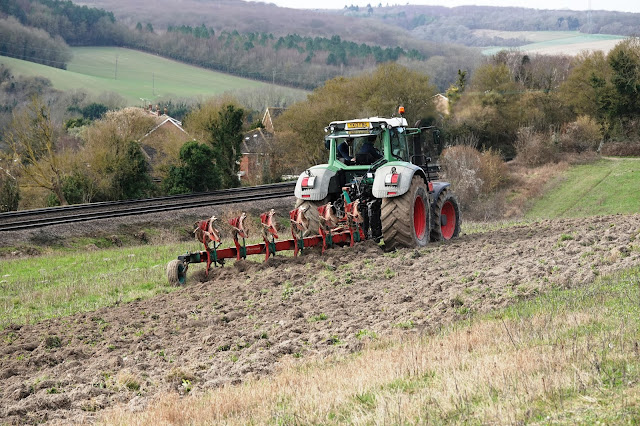 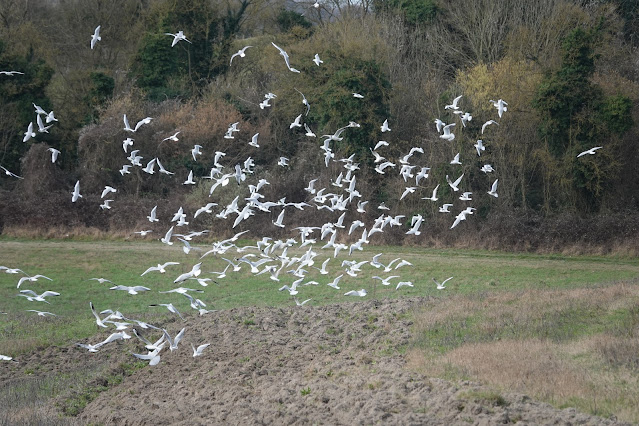 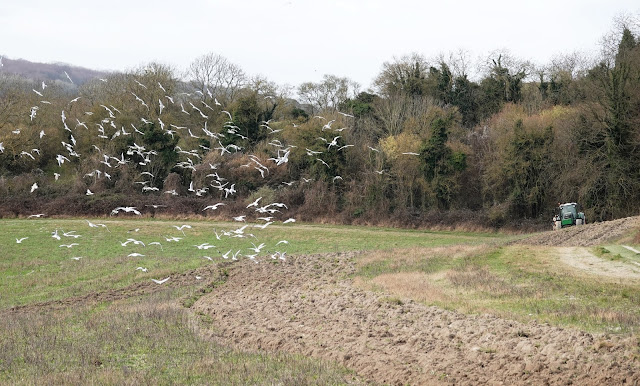 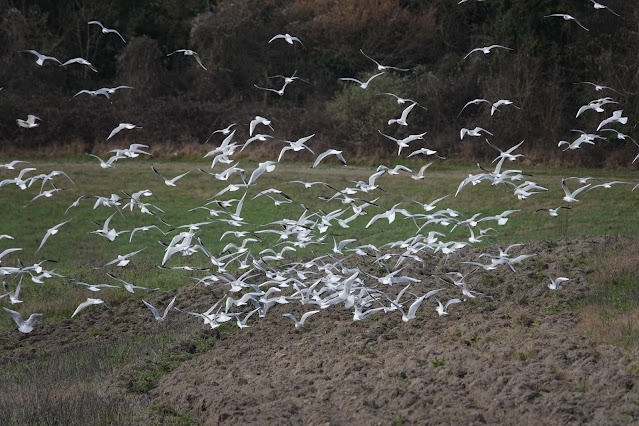 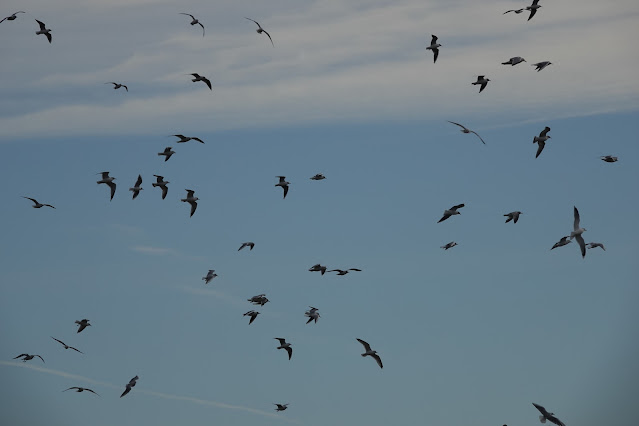 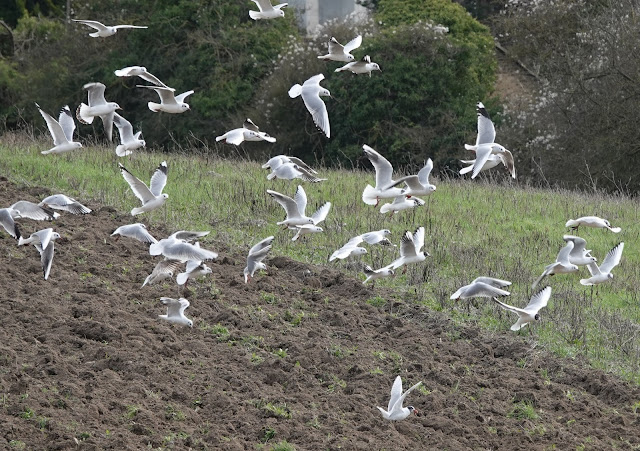 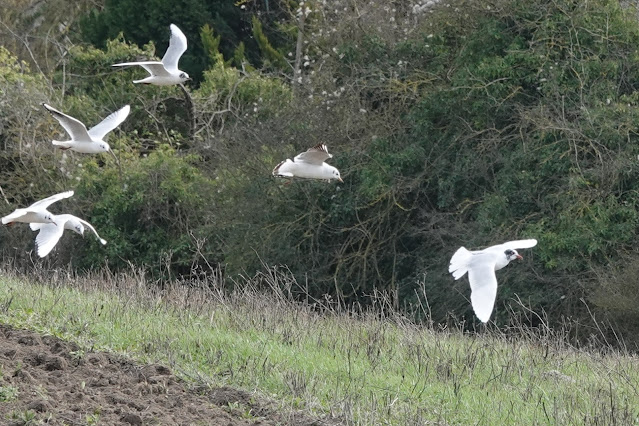 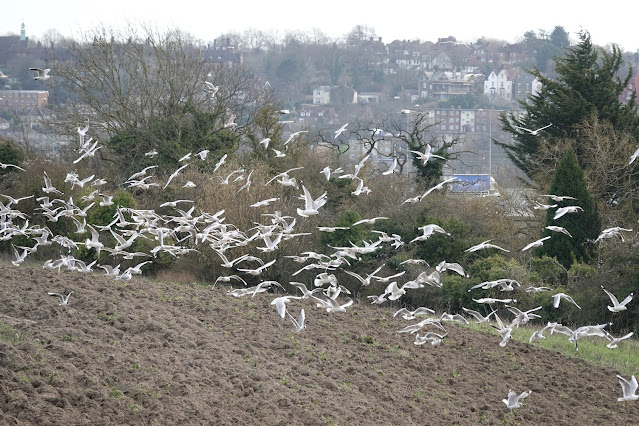 Coltsfoot, Daisies and Field Speedwell were flowering near the edges and I found several winter coloured Common Green Shieldbug along with a couple of Bombus terrestris.

I climbed up towards the view over the Valley but was disgusted that along the whole route were discarded bags of dog crap with some artily hanging in the trees.  There is enough mess on this route without the even worse crime of bagging and tossing. I understand why there are no bins out here so please just take it home. These people walk here regularly so why on earth would you want to tiptoe around it.  It genuinely is one of my pet hates... There were also the remains to two broken sledge from the snowy spell – smashed up and chucked over the fence into the livestock fields.  My mind boggles at people.  I have always been what I think of as a 'people person' but in the last year I have really gone off the idea of spending time with the general public – mini rant over – sorry. 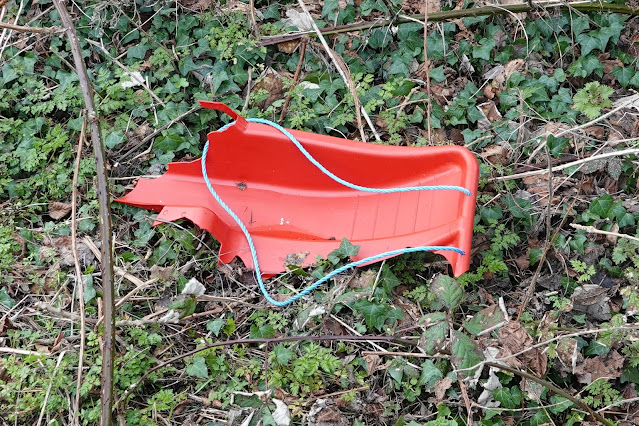 I made my way up the Valley and then to the bench at the start of Mill Hill wood where I stopped for a cup of coffee.  Despite the generally blue sky, the wind had got up and there were even a few spots of rain but thankfully it came to nothing.   A Grey Heron circled over high and one of these days I will find a White Stork here!

I checked out the Fly Orchid compound being careful where I put my feet and found several rosettes showing through. The adjacent clumps of Spurge Laurel are the biggest that I see and were now in full flower and for the first time I could actually detect a scent but I still think I need it to warm up properly. 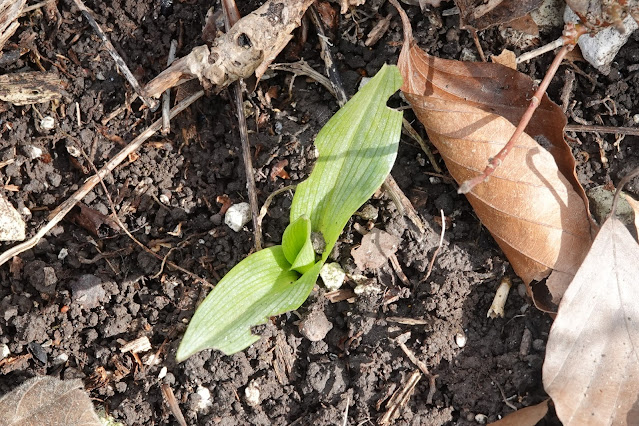 I spent a little while looking at the leaf litter as I could see spiders running all over the place.  Most were a dark Wolf type but there were a couple of what I believe are young Nursery Web.  I also found some very small snail shells which I think I have identified as Pomatias elegans.  Hope to find some live ones in the summer! 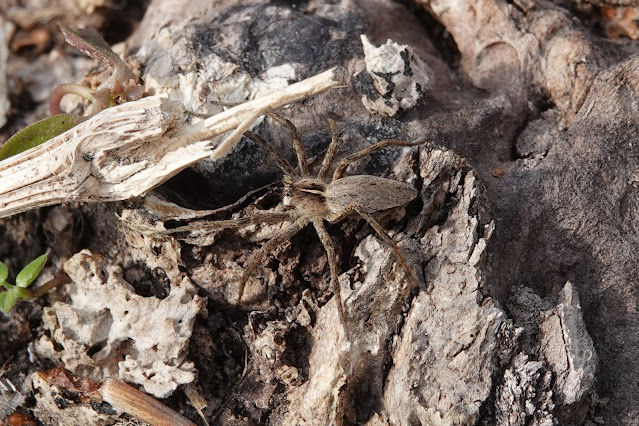 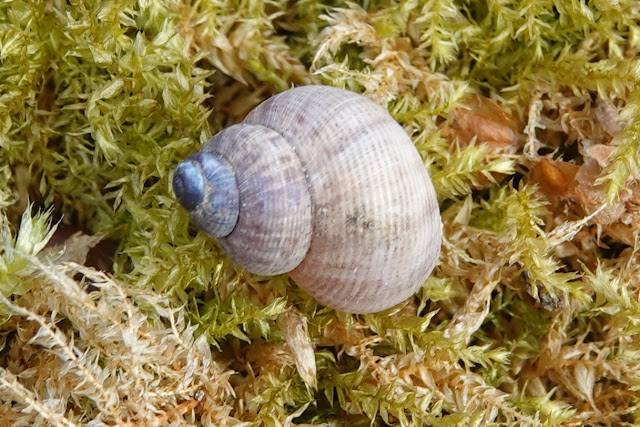 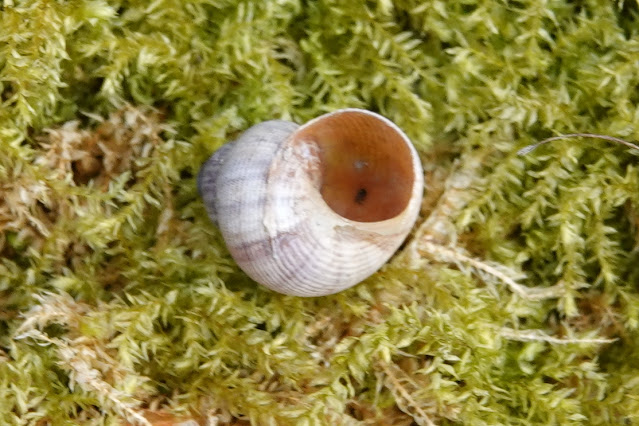 Not for the first time I found a painted stone but this one (from Pickle’s Rox) was so perfectly placed that I left it exactly where it was for someone else to find. 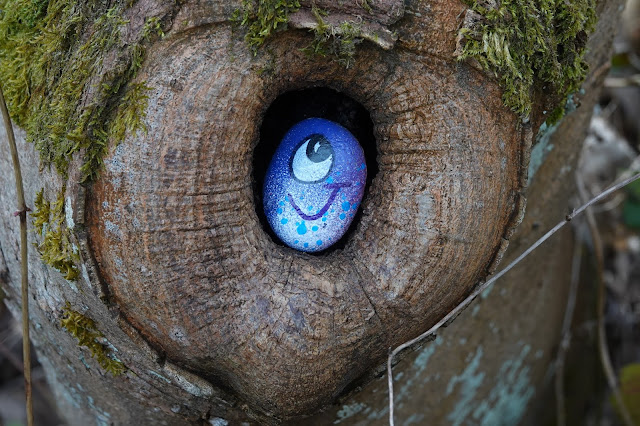 I crossed Brockles and then stayed on the outer path all the way up to the track stretch of Lodge Lane (where I filmed the water under ice). I was hoping for a butterfly or two in the warming but gusty conditions and I firstly found an immaculate but flighty Peacock and then a couple of astonishingly vivid yellow Brimstones.  I tried my best to take a flight shot as they never landed once and I struggled even to keep up with this super fast flying insect but it was a joy just to see them dashing to and fro.  The woods were quite with the odd Tit and Treecreeper and to be honest my eyes were at ground level in the hope of some more inverts.


I found several Bluebottles sunning on a stack of logs and a brief Meliscaeva auricollis and then came across a patch of sheltered Lesser Celandines where I counted seven Episyrphus balteatus nectaring happily along with several minute Bees that I have been informed are a species of Lasioglossum.


The Snowdrops were still looking great as I approached the farm and then cut back towards the woods.  At the footpath crossroads I could hear Bullfinches and the male was in there somewhere singing quietly as they do at which point I got chatting with a walker who turned out to be Alan Roman from the local RSPB group – nice to have a wildlife related conversation and to put a face to a name.

From here I cut through the still deserted golf course and back into Cobham Woods where another coffee and a hot cross bun were required before following the cattle tracks all the way through.  It was actually very quiet in there today with just several singing Mistle Thrush and Treecreeper for my troubles. 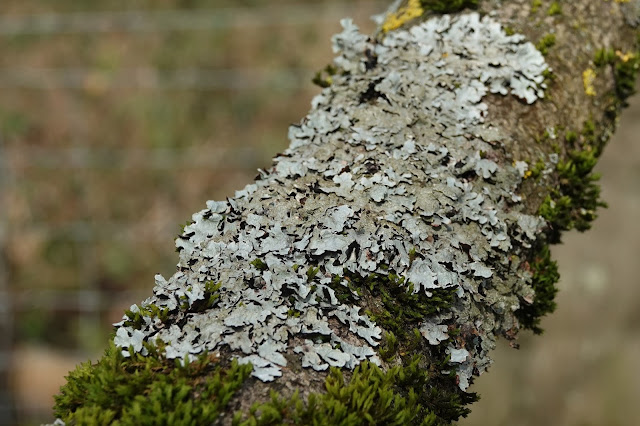 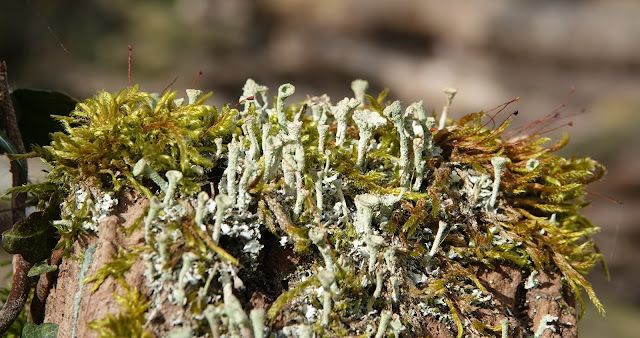 I followed the path across to the Farm and then wiggled my way home with little else of note bar a female Sparrowhawk up over the houses just before I got home.