They promised us heaps of snow on Sunday but the storm clouds did not deliver the goods to my bit of north Kent and although it was very cold the snow was just not heavy enough and was falling on saturated ground from another night of torrential rain. It settled on leaves and branches but little else.  I topped up the feeders and the Starlings and Sparrows were very quickly on the scene.  The Starling carpeted the ‘grass’ at one point and were all vigorously probing as well as picking up suet pellets and mealworms. 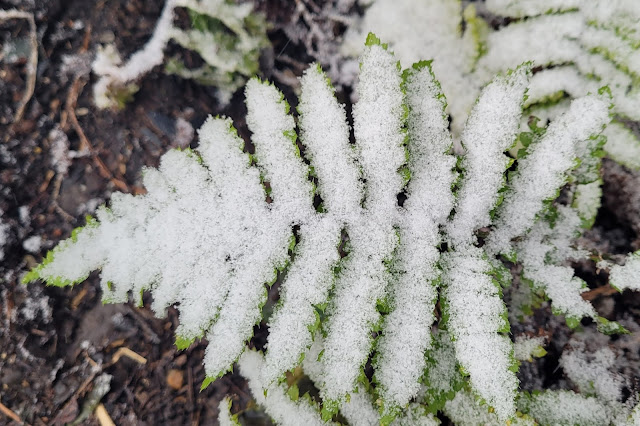 Ever hopeful of some new birds to the flagging Lockdown list I even spent a few short sessions outside hoping that a displaced wader or two would fortuitously fly overhead which of course they did not.

I awoke this morning hopeful of a some unseen overnight snowy deposits and was pleased to see that the garden had now reached the heady depths of about an inch so with tiny flakes still falling I got myself wrapped up and headed out on the Ranscombe Loop.  I was not expecting a full on wildlife experience but simply wanted to see the place where I have spent so much of the last ten months with at least a thin blanket of winter snow.

The wind was sharp and still from the north east as I headed up the Cuxton Road with my head down to avoid the stinging icy particles passing a line of stationary traffic in each direction as some unmanned temporary traffic lights were both stuck on red.  Many cars had single adults with kids so not sure where they were all going at 8.30 on a Monday morning with no schools open. 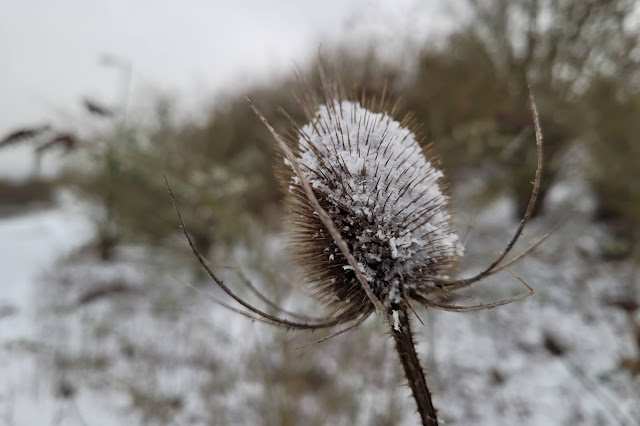 There was nothing to see until I reached the Ranscombe car park where a Common Snipe appeared overhead with a single Fieldfare.  So, a displaced wader but not the Woodcock I had been hoping for! However, it was only my third on all my walks and my first for the reserve so I was very pleased.

The views down over the Medway Valley from Longhoes were somewhat different to my previous shots with monochrome shades carpeting the land.

I cut through Meralls Shaw where some hardy soul was wild camping but it was very quiet in there with just a Treecreeper and a couple of Song Thrushes exploding from the path side Brambles. 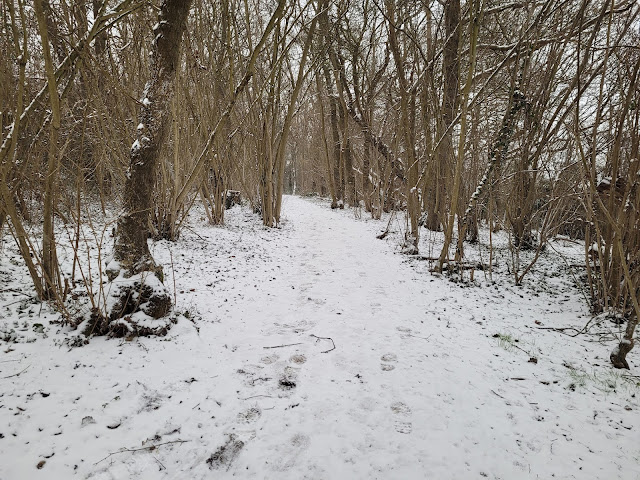 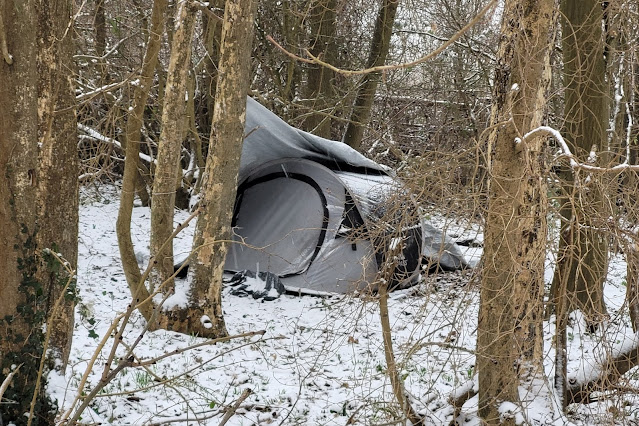 I put my head down and headed across to the path to the Valley rather than going for Birch Wood Corner as tere would have been too much open ground to play with and looped around and down. Blackbirds seemed conspicuous and I suspect that the number I saw on my walk was simply those that are normally there suddenly becoming visible in the snow rather than and actual influx.

Snow underfoot meant that I may have accidentally taken a few slightly off piste routes this time (sorry!) but the path less travelled is always better and I got my rewards with a plump Woodcock erupting from the woodland floor in a whir of wings being my most sort after addition to my Walking From Home List.  I also found Pheasant which I encounter only rarely and two fine buck Fallow Deer who skipped off through the trees before standing their ground to check my out. They had three fine antlers between them.  I stood and watched them for a while before they decided to vacate the area by leaping a fence and bounding energetically across the fields up towards the Meadow Clary enclosure.  This was then the only time my camera came out during the day to take a couple of distant shots.

A little further on a fresh Mole hill was visible through the snow. I stopped but not quite soon enough as more soil was momentarily pushed out before the workman below downed tools at my galumphing along the path.  I stood for a while but there were no more earth movements.  The two Robins there were equally miffed as it suddenly occurred to me that they had been flitting down to the newly tilled soil before my approach. I apologised and moved on.

I cut up to Brockles through the woods rather than the muddy ascent through Kitchen and as I reached the main field a single Golden Plover flew over calling in the grey becoming my third wader and third site tick of the walk.  I have still not seen a lapwing here though! A few Meadow Pipits came up as I approached the animal carved bench where I stopped for a coffee.  I had not noticed before that the back of the bench has a Hare and a Man Orchid on it.  It really is a wondrous piece of art.

Bounding Thrush steps could be seen through the snow and as I dropped back down the inside path, there were Redwings fossicking in the snowy litter with lots of soft little ‘pook’ sounds.  They all looked so dark against the snow and strangely small too.

I frequently just stopped and listened and by doing this I had great views of Coal Tits and Goldcrests and definitely two pair of vocal Marsh Tits.  It has been so pleasing to find these on every walk up here this winter. A Firecrest called vociferously in the pine edge - my 4th new site bird today.  Robins appeared as if by magic at every stop and perhaps is hold take some mealworms to scatter where I stop at the moment.

I had only seen a couple of people out but was somewhat surprised at the jolly man in a glowing red fleece, full winter gear and above the knee shorts. ‘Bracing today!’ he said as he came past me... I was done up like Nanook of the North!

A Green Woodpecker was persistently calling from one of the old Chestnuts up near the Mausoleum but it had me slightly puzzled as the key was slightly off and it would also not shut up!  I began to wonder about Little Owl before it revealed itself and yaffled normally.  The Lesser Redpoll flock circled the Birches as usual but even if they did land that would have all been little black bloblets. 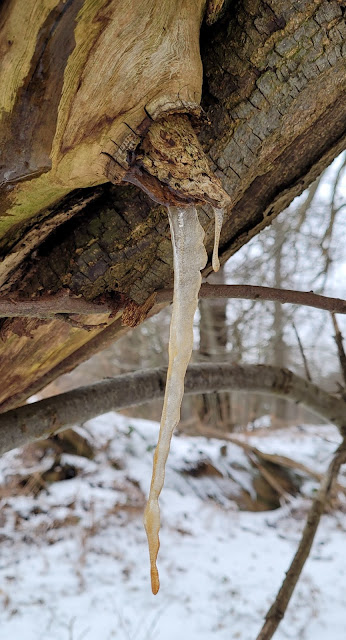 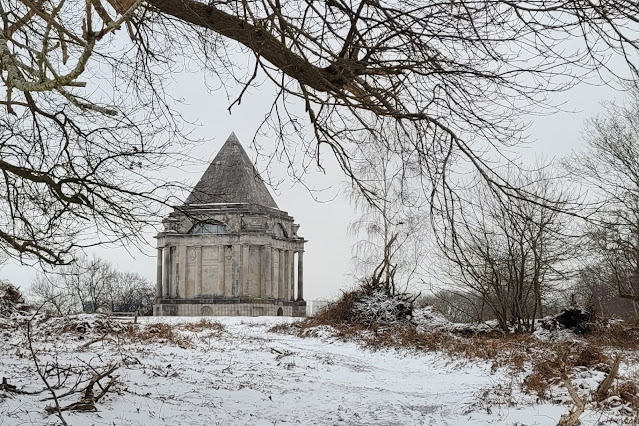 I did not fancy the main path back so went through the Elephant Tree and then down through the trees.  The snow was a little deeper here on this north facing belt and the ground was certainly firmer underfoot too.  Redwings, Song Thrushes and Blackbirds moved ahead of me and the Marsh Tits by the Ash wood were still vocal before I reached the paddocks of Knights Place Farm and wiggled on the flat back to the Albatross Avenue Tunnel.

I gave the birds another feed when I got home and marvelled at how the Primroses that I only transplanted during the week were still trying to flower through the snow.  I loitered for a while in the hope of a stray Lapwing flock but other than 15 Fieldfare there was nothing drifting around in the swirling fine snow. 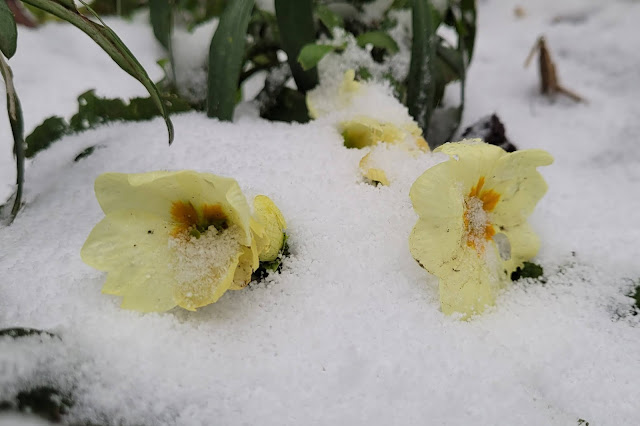 Perhaps I will get another day out in it tomorrow? 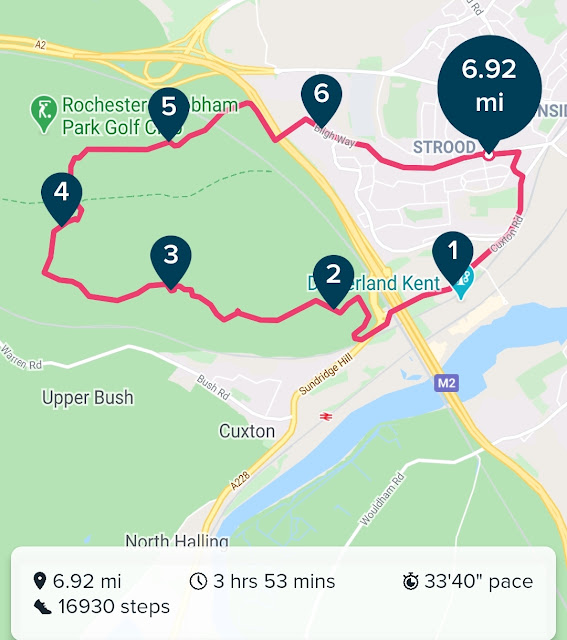