Well, I was not expecting a second day of snow to play with but the persistent micro flakes of yesterday built up into a couple of inches cover and was still falling when I woke this morning.

And so, after a quick garden inspection and top up of the tables I headed out.  It was definitely cooler than Monday and the wind was certainly stronger as I ambled down into town and then along the river by the submarine.  A female Peregrine was above my house as I left and little parties of Redwing ‘tsipped’ over while Pied Wagtails looking like a fluffed up pom-poms scurried around the icy car park and there was even a Meadow Pipit down with them.  A flock of 30 Teal were at the end of the creek by Morrisons and were my first on this bit of the river this winter. 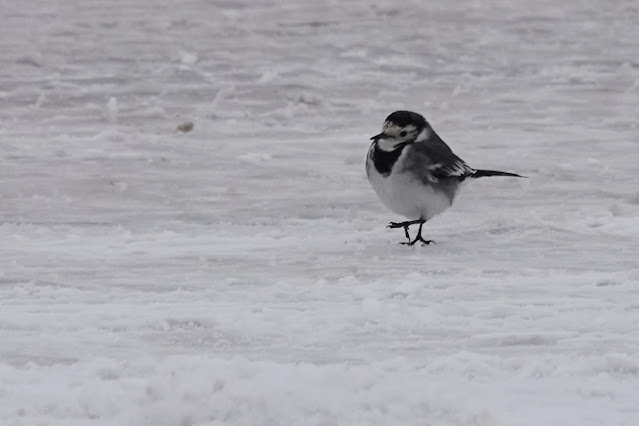 The tide was racing in hard and a rather tired looking Great Crested Grebe bobbed past me just a few yards from the bank and the gulls came into some bread scraps that I had taken out with me.Others were resting up on the now frozen wasteland and the snow and ice and grey light made the Common Gulls all look especially dark. 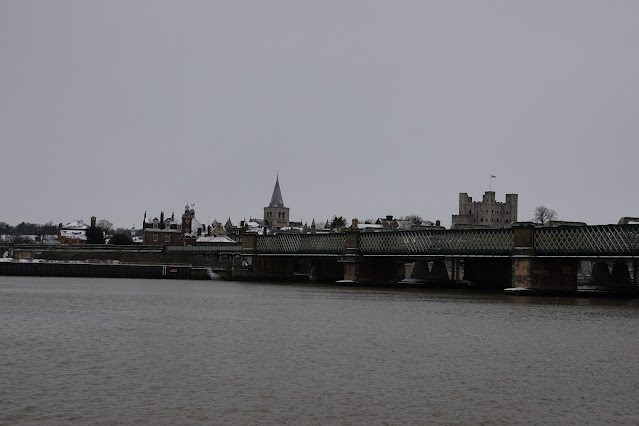 Donkey Hill was tricky in places but I made it to the top in one go with Redwings and Blackbirds popping out of the Ivy and Hawthorns on my way up.  There were more at the top and all the way down the lane towards Temple Hill but the snow was blowing hard and the camera had gone away again by that stage.

More Thrushes and a Tit flock were seen as I followed the path past Gundolph Pool which had nothing bar a Mallard.  It was not even frozen which I thought odd.

I was lulled by the wall of Upnor Castle House into thinking the wind had dropped but as I reached the steps the other end it was very clear that it had not. Even Coelho’s was closed so no pastry for on the go today!

The tide was very high and still coming in with the wind behind it and for the first time the whole unofficial foreshore route was cut off to me.  Saying that, it probably did me a favour as the wind was now howling and what bits of my face were exposed were already numb and my eyes were aching with the intense cold so I turned around and decided on a shorter loop back. It would have been good to be out on the estuary with the tide so high but I do not think I would have been able to actually focus on anything unless it was under my nose!

I have to admit that from here it was pretty much a heads down walk home but as I swung around by the MoD Plant training site at Wainscott I did find a lovely mixed group of thrushes feasting on some remaining Haws. I am also pretty  sure that I was seeing Woodcock tracks ambling out of the bushes and onto the pathside with short steady gait and even probe holes too.  Could I find one though? Of course not! 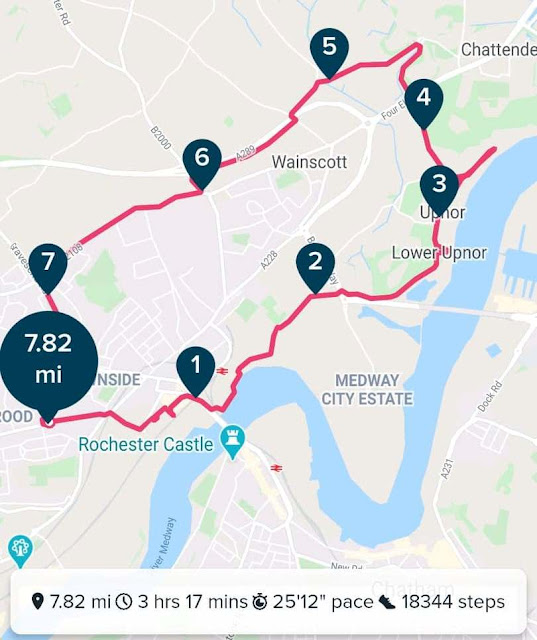