First day out west with the new crew and the potential of some new birds for Mike, our Lesvos virgin. We had only got as far as the Aegeon Hotel when a pale, peach rumped Stonechat flew out of the garden and perched on some reeds. Once again I could see no reason for it not being a Siberian Stonechat but I chose bins over camera and it scooted out of view... There is a chance that there is a picture out there – fingers crossed.

I started at the Eresos end again and by the time we had worked our way down into the start of Meladia we had been suitably entertained by Cretzschmar's and Cinereous Buntings and showy Black-eared Wheatears and Rock Nuthatches.

Three male Black-headed Buntings were dotted around one bush and four more were seen in the valley bottom including a couple of energetic singers. Eastern Orphean Warblers showed very well indeed and Whinchats were liberally dotted around the view along with the requisite Stonechats. Mike was one happy bunny.

Three male and two female Collared Flycatchers were seen along with three Pied and about 20 Spotted Flycatchers. There were no migrant Warblers but Bee-eaters were drifting over very high and Marsh Harrier, both Buzzard species and Short-toed Eagle cruised through.

A sparkling male Red-backed Shrike became only our second and a singing Chiffchaff was a novelty especially as it was plain grey brown in colour with a big supercillium and clean pale underparts. The legs and bill were very black looking. It was the song that attracted attention and matched the one I heard last week. ‘Chiff-chiff-chaff-chiff-swee swee swee’. I will do some digging.
The Rock Sparrows were still at the crag and two Crag Martins briefly came in and three more were seen down at the Meladia Chapel where six Pallid Swifts were good lunchtime entertainment along with more singing Black-headed Buntings and the Woodlark family.

The Little Owl was back on his shed post perch and another male Red-backed Shrike was with (but not eating) Whinchats at the Sigri Old Sanitorium as we bumped our way down past three Lesser Kestrels and a Woodchat into the town.


Faneromeni was fairly quiet but we did see a couple more Collared and Pied Flys but Spot Flys were everywhere. Two Turtle Doves flashed through and a cloud of flava Wagtails and Sand Martins appeared from the river mouth reedbeds and two immense Alpine Swifts almost parted my hair over the ford on their way down for a drink in the river where a Squacco was fishing. A male Lesser Kestrel circled overhead and another female Marsh Harrier headed up valley but it was the Common Starling that I was most pleased to find although Mike seemed a little baffled while Julie was happy with an island tick!

I aborted Faneromeni and headed for Ipsilou instead and a full circuit in the warm evening air gave some engaging Wheatear and Bunting views, two singing Hoopoes, trilling Wood Warblers, a singing Golden Oriole and a pale phase Eleonora's Falcon just as we were about head for home after another long day.

Back in Skala Kallonis it was the night of the huge Easter bonfire so we hastily headed down to dinner before the entire village turned out for the symbolic lighting of the fire at 11pm and marvelled that the village square would once again survive such pyrotechnic madness... 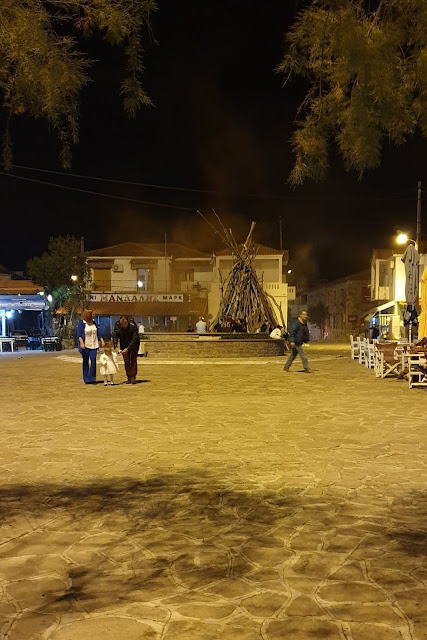