I had arranged to take the Dutch ladies, Heleen and Mieka out west today and we set out at 8am on a warm still morning but only made it as far as the Christou River bridge where a female Citrine Wagtail had literally just been found on the small pools. Red-throated Pipits were tiptoeing around the margins with tails slightly raised as if the water was scalding hot and Black-headed Wagtails popped in and out of the saltmarsh plants. The Citrine did the decent thing after five minutes and walked into view. She was a very bright individual with sulphurous yellow on her face and breast. What a great start.


The drive out west was without incident although seeing three separate Chukars was something of a surprise. Once on the track we stopped at the little chapel where Pied Flycatchers could be heard and a Sombre Tit sang from the canopy. Two Wood Warblers and more Flycatchers were seen in the next grove and Cretzschmar's Buntings, Black-eared Wheatears and Rock Nuthatches were all in song.

The descent into Meladia gave good views of the above species along with a vibrant Cinereous Bunting and before reaching the bottom a stunning male Collared Flycatcher popped up on the fence along with numerous Stonechats and several Whinchats.
The Orphean Warblers were still singing well in the scrub in the side valley and perched up on top and gave superb scope views. This is still possibly my favourite songster on the island. Woodlarks sung overhead and a pair of Woodchat moved on ahead but there were no Orioles or other Shrike species to be seen. Chukars called up on the hillsides.

We spent the next few hours in the valley bottom watching numerous Pied and Spotted Flycatchers and at least four more Collareds, a few of the usual warbler species along with two more Wood Warblers and a Chiffchaff, two Redstarts, more Whinchats and Nightingales. I heard both Tree and Red-throated Pipits again but could not find a Black-headed Bunting. The Rock Sparrows were still by the overhang and a party of Bee-eaters invisibly headed north.

Two noisy Great Spotted Cuckoos chased each other past the car. One still had some bronze in the wings and was presumably a first summer, the other was incredibly spotty. One perched up for us while we had lunch which was kind of it.

Once past the ford I picked up a singing male Lesser Grey Shrike out near the beehives. He seemed to be catching Violet Carpenter Bees and was eating them with relish (and no I do not mean pickle...) It is always good to see the first new in Shrike.

Just beyond this a chat popped up and I called Whinchat but a quick look told me something was not right. It was a Stonechat but pale fawny brown with a completely plain pale peachy rump and an all dark tail. She had a similarly peachy front, white throat, strong supercillium and well marked mantle. I cannot see why she was not a Siberian Stonechat and later input confirmed my suspicions.  This was only the second for the Island (not sure about the whole of Greece) and I was fortunate enough to see the only previous one, a fine male near the saltpans on the 26th April 2014.

Below are some shots of what I also believe to be a female Siberian Stonechat that I took at Albufera on Mallorca on the 26th February 2018 for comparison. I really should submit this to the relevant Spanish Committee. 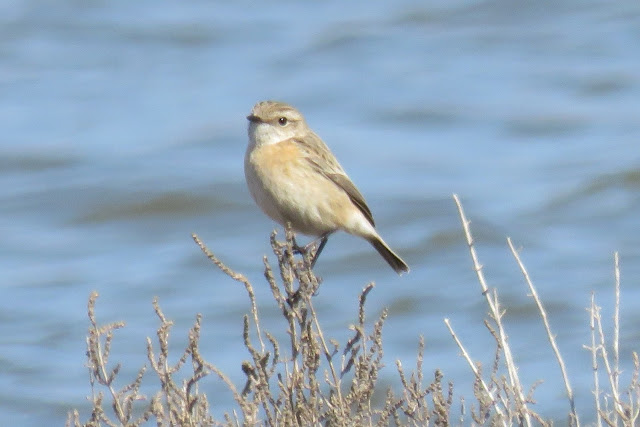 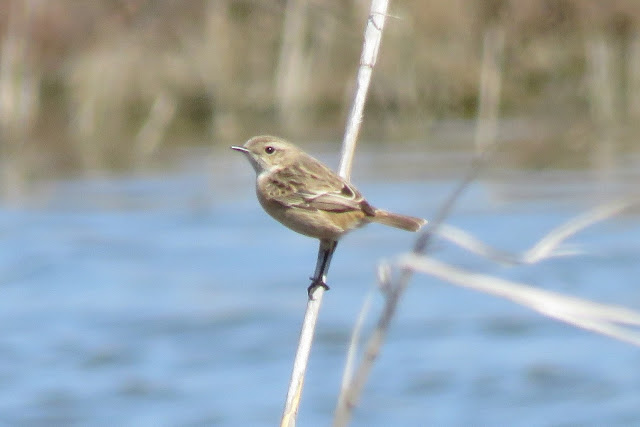 After this excitement we continued onto Sigri passing two Lesser Kestrels and a splash of flava Wagtails on the way before heading out into Faneromeni.

The beach was our first stop and the sea was dotted with snaky lines of Yelkouan Shearwaters as we waded through the vast flocks of Spanish Sparrows to get to the river mouth. All four hirundines were coming down to bathe and a Little Crake snuck away as we approached. A Savi's Warbler had been heard earlier and it was a pleasant surprise to hear it start up after just a few minutes wait. I hear this species reeling so infrequently that it is always a special sound to encounter.

From here we hit the upper valley and had good last walk of the day with still more of all three Flycatchers and a few 'throats, Blackcaps, Woodchats and Whinchats.

A Long-legged Buzzard circled overhead and an Alpine Swift powered through with some Common Swifts. 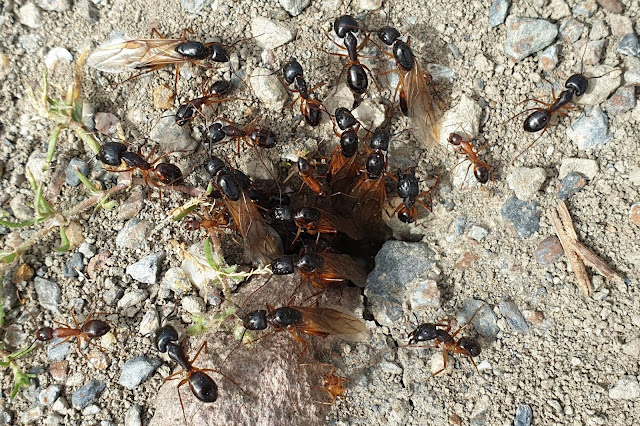 Ants were emerging and everything - even the Jays - were out antcatching. A Tree Pipit at last gave itself up for the ladies and with news of a male Citrine at the Lower Ford we headed back to end the day as we had begun.

It was not there but there was more than ample recompense when a male Flycatcher caught my attention from the car as we were leaving. I had thought it was a Collared but when it turned I saw a dark nape and what could only be a white median wing bar. I crept out of the car and called Jon Lowes and his crew over. Surely it was a male Semi-Collared Flycatcher? 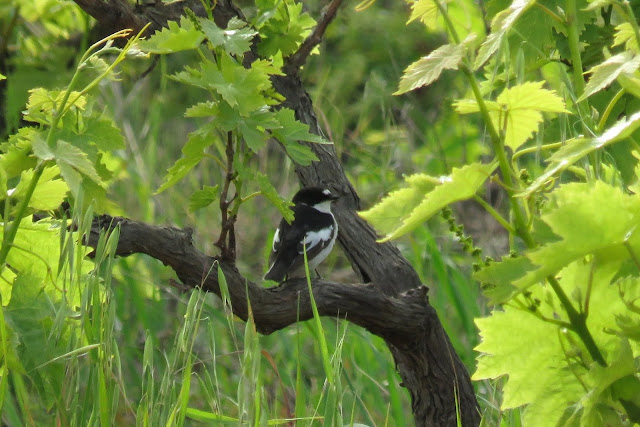 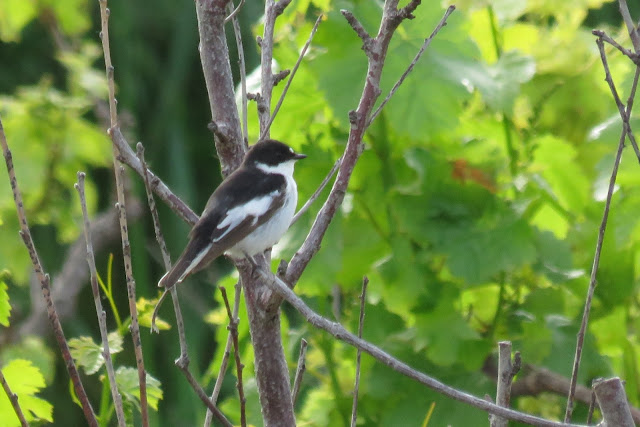 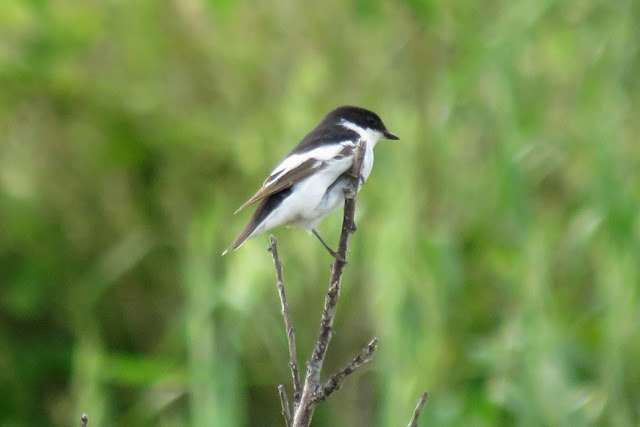 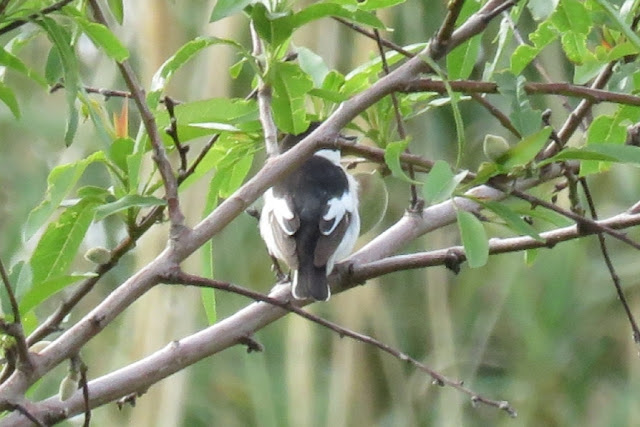 There were smiles all round; pictures were taken and the bird enjoyed for another ten minutes before we needed to unblock the road.

The journey back to Skala Kallonis was smooth and punctuated by the Isabelline Wheatears in the usual spot and a few minutes to feed the cats at Perivolis monastery.