Breakfast was done, lunch made and the road hit by 8.20 and it was good to be on the Eresos end of the Meladia track but just after nine. We found Mel, Gill and John around the first bend where a Great Spotted Cuckoo had been seen. A scout around gave a brief view and some calling as it encountered a Jay. The first Collared Flycatchers were ‘peeping’ in the oaks and it was to become a ficedula day. By the time I had reached the top of the escarpment I was already up to seven and there was even a singing male in the solitary little bush by the top cattlegrid. 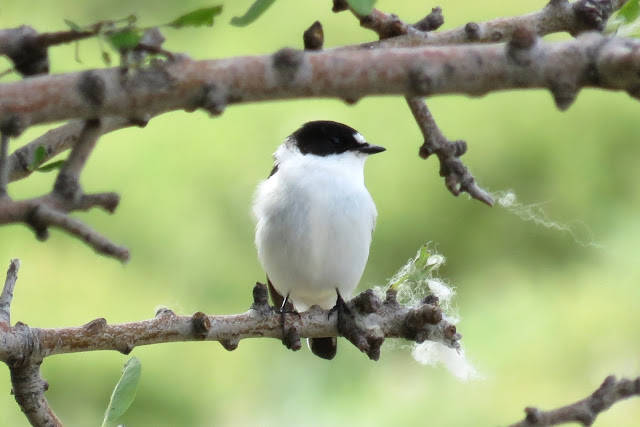 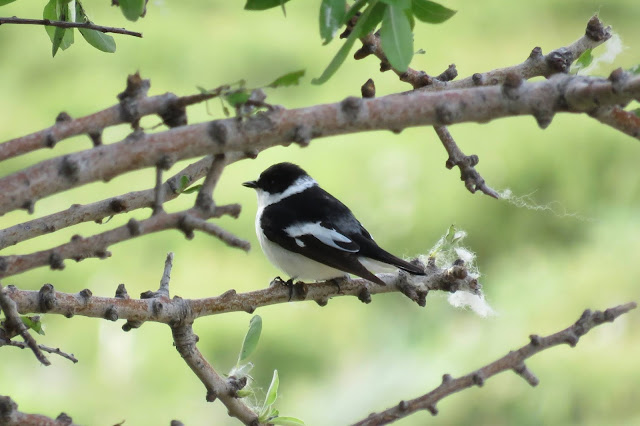 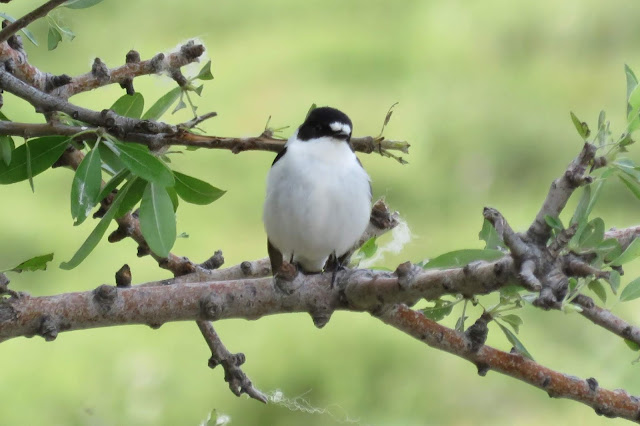 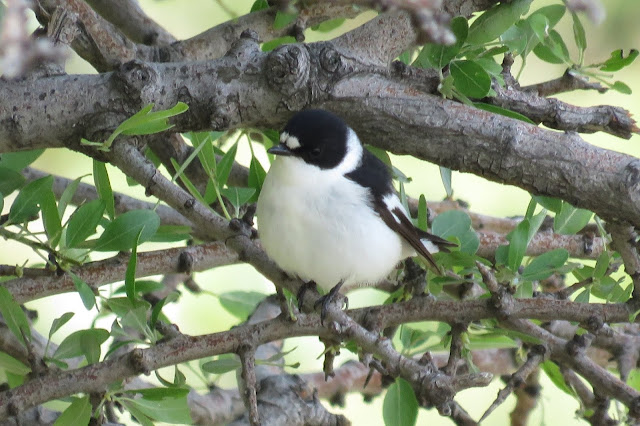 Rock Nuthatches attended a fresh nest under a rock overhang and you could hear hungry young begging inside the flask shaped mud construction while the usual Buntings sang around us. 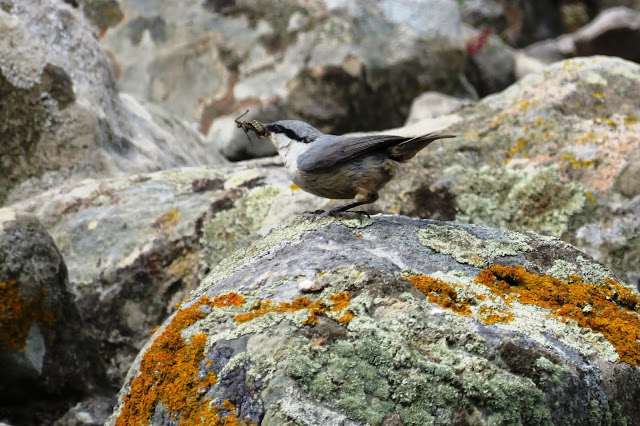 The first big oak at the top of the side valley was full of song and the distinctive tones of a Thrush Nightingale were heard from the cover around it while several more Collared and two Spotted Flycatchers flicked from cover and an Orphean was trying to outsing the Sprosser. A Hoopoe flopped into view and bathed in the first rays of sunshine to break through while another serenaded from the hillside.


I stopped a little way before the ford and ambled back up the road to check out the Magic Tree but before I got there two large grey warblers flew in across the road. Bins up to more bars! Surely not but yes, not one but two more Barred Warblers! Before this trip I had only seen one here before. One was poorly marked but the other was fully vermiculated and over the next half hour he gave me some great views and even started to sing. I forgot about trying to get a picture and just enjoyed looking at his fierce expression, pale edged wings and often almost crested crown. There were two male Eastern Orphean Warblers and three Great Reeds in the same scruffy patches and the latter really did not like the interlopers. An Eastern Subalpine was my first here and several Lesser Whitethroats and Common Whitethroats were dotted about. A family party of Woodlarks fed amongst the asphodel stalks with a similarly spotty family of Stonechats using the spent flowerheads as perches.

Down at the Ford there were five Ruddy Shelducklings and their honking parents and the river sides were full of Flycatchers with Collareds outnumbering Pieds. Both species were a joy to watch and several Spotteds joined them as they flicked out after prey. Wood and Willow Warblers were seen and more ‘throats were clambering about while Nightingales were particularly showy. By the time I had checked the fig grove and wandered up the valley a ways I had seen over 20 Collared Flys and added both Tree and Red-throated Pipits to the day tally along with a Little Bittern, male Redstart, plenty of Whinchats and two pair of Rock Sparrows at the rocky overhang beyond the grove. 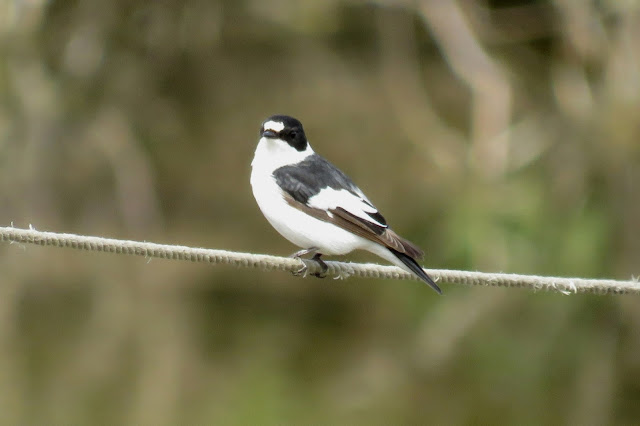 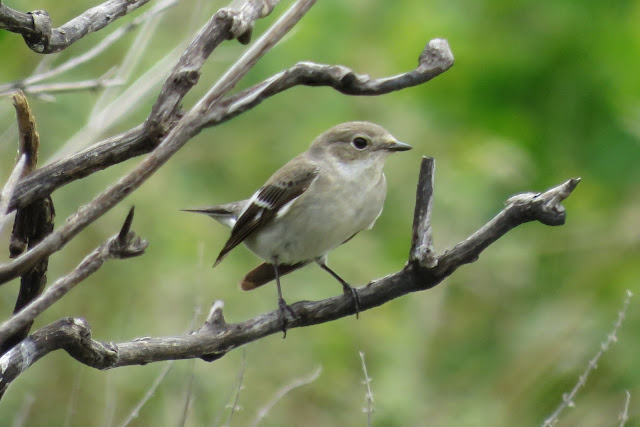 Other than a pair of Woodchats there were no Shrikes whatsoever. Three Glossy Ibis circled the river mouth and Wood Sandpipers dotted the stream bed.

Lunch was taken down a track before the Chapel that we followed until it would have required spooking some sheep so we had lunch by the invigorated river with calling Collareds and Wagtails for company.

We bumped onwards past the typically angry Little Owl and down towards the Sigri Old Sanitorium where two pair of Tawny Pipits were found on the road and a Quail was giving it large in the Whinchat infested garden on the left but as usual stayed well hidden.


Unsurprisingly, there were Flycatchers in the OSS gardens with two Collareds and a Pied being seen and a Purple Heron lumbered up from the stream bed. What appeared to be four Harrier Jump Jets tore through the valley at low elevation before banking over Sigri. 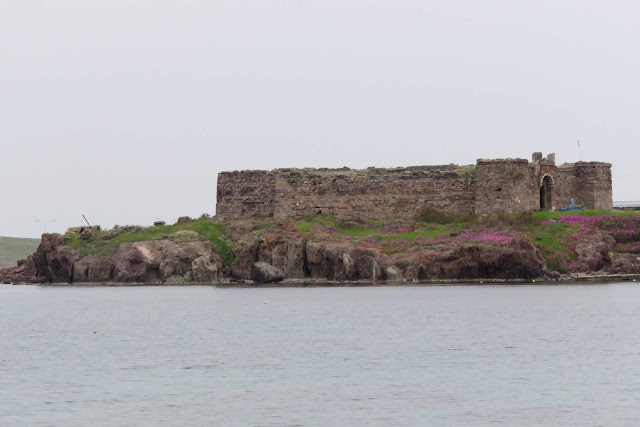 The rest of the afternoon was spent patrolling the fields of Faneromeni and adding to the already impressive haul of flycatchers and I suspect that I was somewhere close to the 50 mark for the day for Collareds and 20 for Pieds. They were everywhere I looked; on fences, in olives and figs, in riverside mega-reeds, on shopping trollies, telegraph wires and Giant Fennel. It was a pleasure to be amongst them.

There were other birds too with Chiffchaff and Wood Warbler, Blackcaps and ‘throats, Hoopoe, Spot Flys and Nightingales all seen well, another singing Quail eluded me, while hundreds of Spanish Sparrows and flava Wagtails gathered in the fields. The cacophony of chirping and rasping was deafening at times. Two female Red-footed Falcons headed up valley and an adult Night Heron moved between the two fords as I was watching a couple of Turtle Doves feeding on the road.


It had just started to lightly rain and the sound of a small party of Bee-eaters descending below the cloud was my cue to pack up and drive back to the hotel after another magnificent day out scouring the Lesvos landscape for incoming migrants.

There was just time for one last diversion on the way home and a Chukar duly obliged along the Petrified Forest road affording me with my most prolonged views ever of this charismatic and often hard to see partridge.

Back at the pela there was just enough time for a mini heron fix at the Kallonis Pool and better view of the Eastern Tree Frog before dinner called me back and the dream dessert of Thekla's Orange cake sent me to bed with a full belly and a smile. 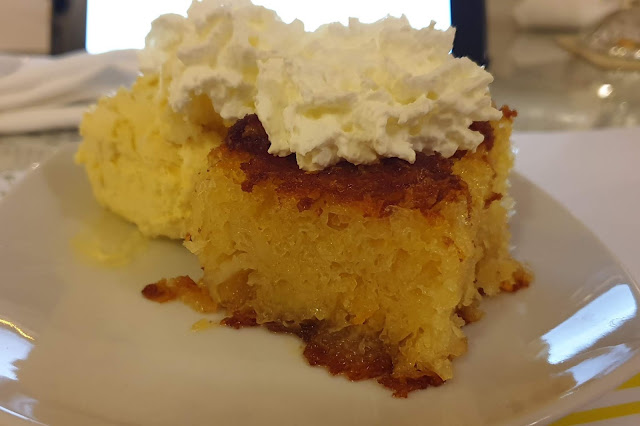