Today really was about staying local; in fact I got no further than the eastern edges of the KSP and this is where I started my day post breakfast. It started to rain lightly as I wandered down the track but there was no wind and I had hopes of some birds dropping in.

There was a black huddle of birds on the end lagoon which revealed itself to be an amorphous blob of at least 60 very tired Glossy Ibises. Some were preening but most were sleeping and several were even hunkered down on their ankles in the water. I counted several times but separating heads from backs was tricky and counting legs did not work either and I suspect my count was conservative.

Three adult Spoonbills snoozed next to the flock and two Black Storks were actively feeding but there was no sign of the pair of Pintail and I had to make do with two male Mallard and a pair of Garganey. A gleaming White Winged Black Tern bounced as if on elastic across the pans and I counted 12 Little Terns which was encouraging given the paucity of sightings and my distant scanning produced two male and a female Red-footed Falcon on the Lotzaria wires.
Hundreds of Spanish Sparrows bounded north off of the gulf and inland and I counted about a 1000 in my hour there. An adult Slender-billed Gull was present and I heard a Grey Plover but there were no other waders of note - apologies to the Avocets and Wood Sandpipers. Black and Blue Headed Wagtails bounded around and a Hoopoe sang but the highlight was non avian when a rustling drew my attention at the side off the path. I peered in and found the most enormous Hedgehog I have ever seen. I stepped back and he eventually revealed his pointy nose and amazingly big ears. This was my first ever live Eastern Hedgehog having seen many with a less spherical shape on the Island's roads.

Back for coffee with the newly arrived Julie and Alex, and a male Red-footed Falcon circling over the Pela and then out to Lotzaria via a bit of Squacco and Tree Frog action on the Kalonis Pool before passing a Glossy Ibis and another White-winged Black Tern at the river mouth. I tackled the lower Tsiknias Ford for the first time this week (to a round of applause) and then bounced through to the pans again where Little Stints and eight Temminck's Stints were found along with many more Wood Sandpipers than so far this trip.
Two Short-toed Eagles perched up on the ridge by the main road and one got a right beating from a Long-legged Buzzard which in turn was mobbed by a slim ring-tail that I was pretty sure was an immature female Pallid. 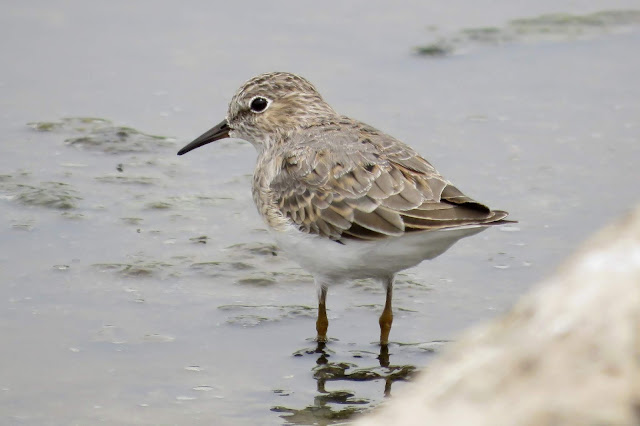 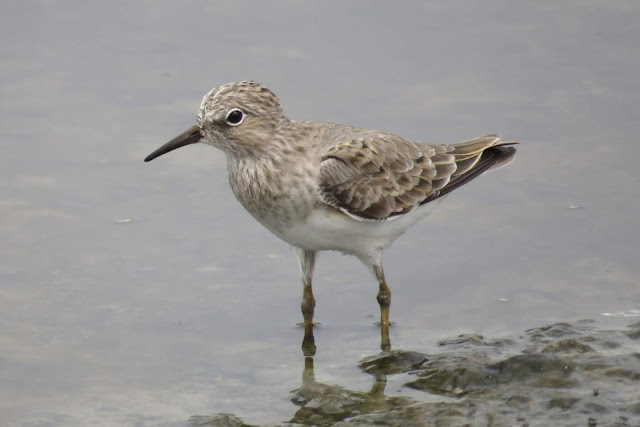 Lunch and then round three for me in search of the group of 30 Collared Pratincoles but by the time I had picked them up they had multiplied somewhat and over a hundred were wheeling above Lotzaria. Over the next hour they drifted to a fro and I was able to get a better count when they split into two groups and 125 was my best effort. Quite amazing and sometimes they came down lower and you could hear them call and get a flash of chestnut underwings. 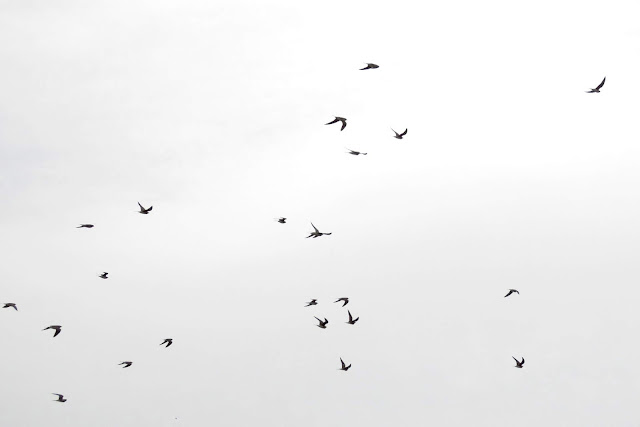 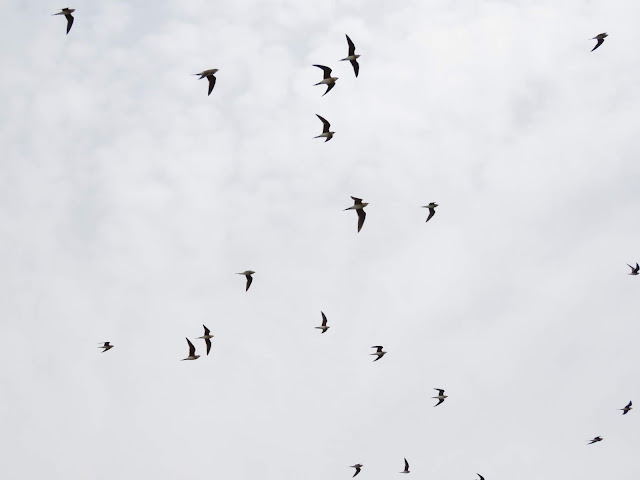 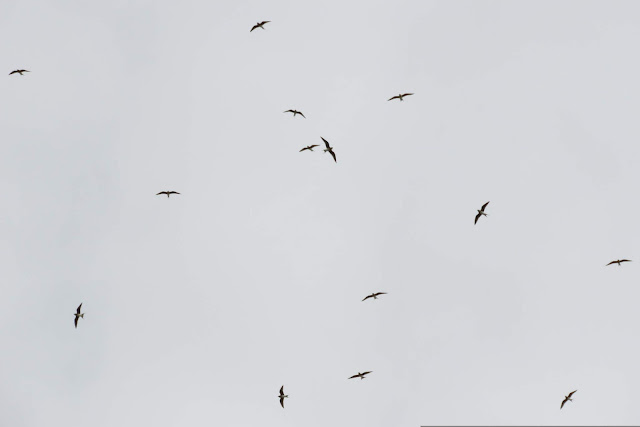 Other waders had also increased with nearly 200 Ruff, 60 Little Stints and seven Curlew Sandpipers on one lagoon and two Marsh Sandpipers were in the channel along with a couple of Squaccos. The first Common Swallowtails were on the wing and already egg laying on the normal Fennel but were very flighty and I only got a slightly blurry pic of one. 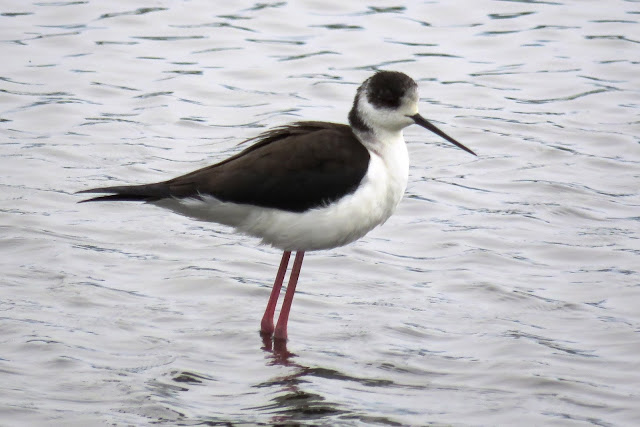 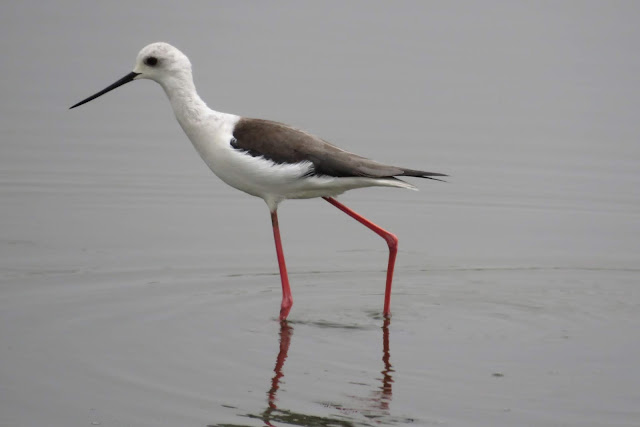 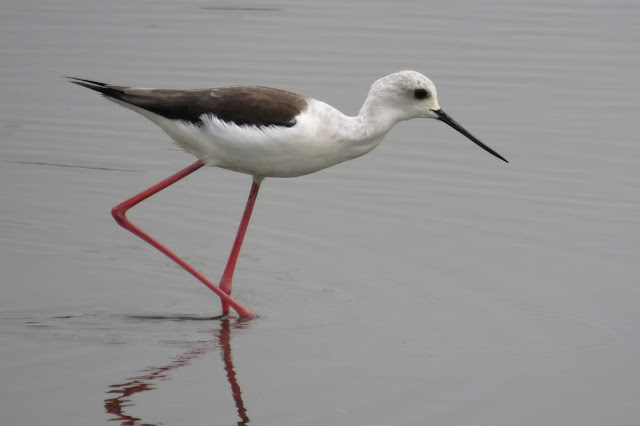 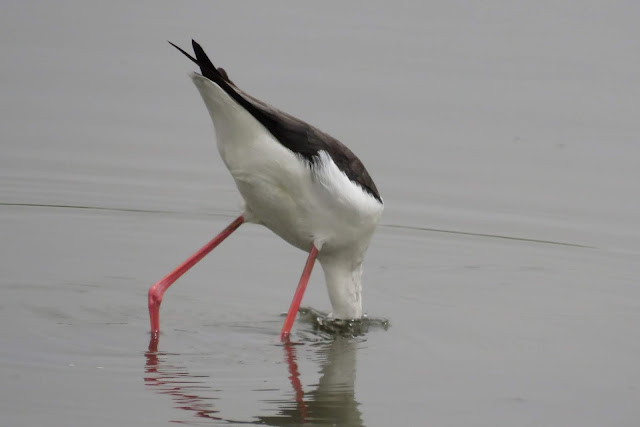 The Little Owl pair were up on their barn again and both birds gave me the evil eye while back at the river mouth there were now 30 Whiskered Terns with five Sandwich and Red-throated Pipits were calling around me whenever I stopped so new birds were arriving all the time.

The last of the evening was spent watching the Alykes sheepfields where six adult Night Herons were resting up, surrounded by a swathe of flowers, mixed Plovers, Stints and Sandpipers.  A furtive photographer thought that belly crawling out through the marsh would not only win him prizes for stealth in his camo gear but also get him better pictures of the herons. Most moved off as he approached and the two that were left were suddenly obscured from his view by the ever inquisitive Donkeys that came over to investigate the squirming green slug in their midst.

Thirty Short-toed Larks chirrupped in the dunes and a few flava Wagtails and a smart male Whinchat were seen. Three Glossy Ibis were on the fields  and a pair of Garganey dabbled at the back with the Ruddy Shelducks but it was actually the horses thundering around the race track behind me that ended the evening off in style. 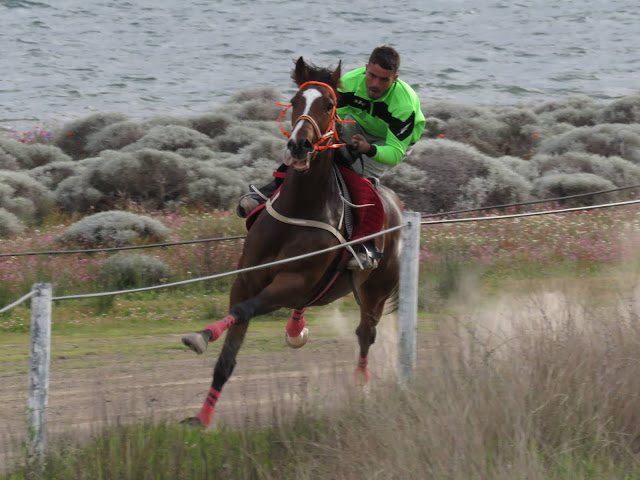 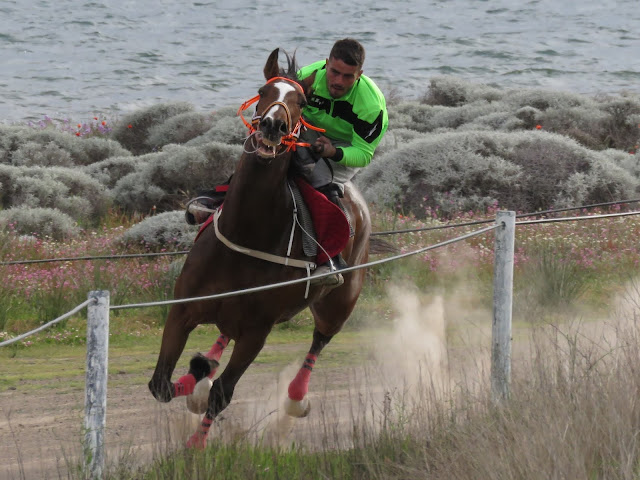 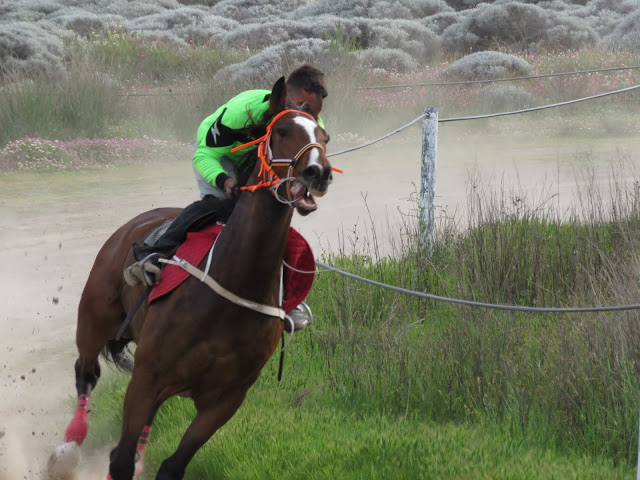 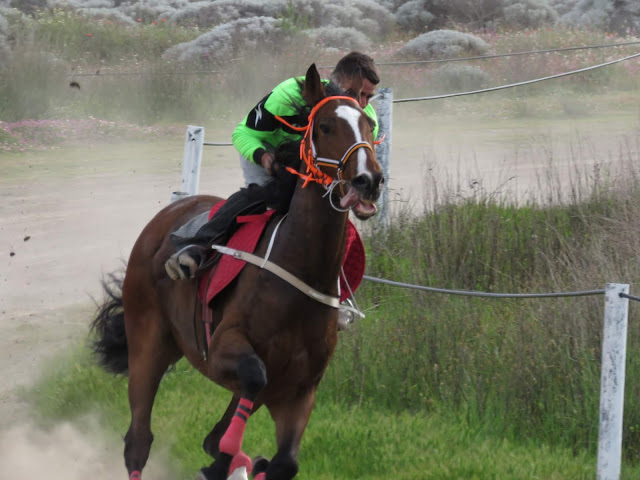 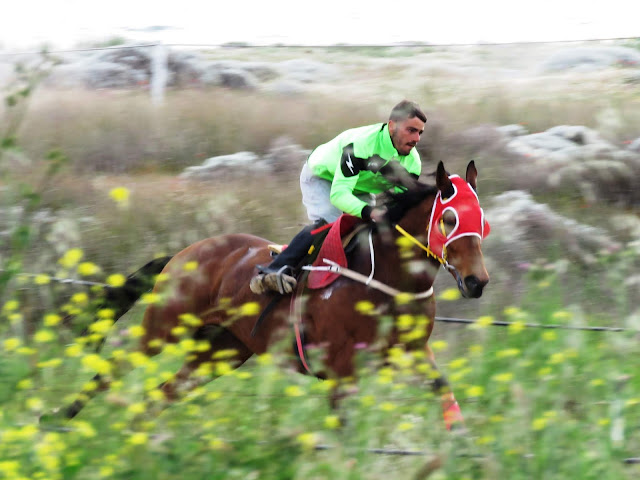