Breakfast was taken with the sound of Bee-eaters all around and about 30 were drifting between the Pela and Aegeon Hotels providing both sets of early morning diners with smiles. Our leisurely approach to heading out was interrupted by the news of two Spur-winged Plovers down on the pools on the Christou. A three minute drive and a similar walk and Mike had his first new bird of the day. As is often the case both birds were sitting around doing nowt.

We enjoyed them in the sunshine before news of a Pelican paddling around in the bay off the Racecourse had us scurrying in an undignified manner for the car (which has been Christened 'Fooey' by the way...). The suggestion that it was a Great White rather than the more likely Dalmatian added to the urgency.

Amazingly we were first down to the Alykes fields as I think everyone else was still having breakfast and Mike re-found his own second tick cruising like an off white iceberg about quarter of a mile off shore. It was obviously weary and was trying to kip but thankfully put its head up every now and then and the profile and lack of any patch around the eye suggested that it was an immature Dalmatian which was confirmed by those who saw it in flight later on.
I drove out of the pans with a little less alacrity than that which I arrived at, passing five White Winged Black Terns fishing in the channel on the way.

From here we headed up island through Dafia and made our way in the strengthening wind to Ipsilou. It was blowing a hoolie and so I drove to the top and we walked back down on the sheltered north side. At some points you could barely stand up but I was glad we persevered as it became a bit of a Golden Oriole fest. They were careening around all over the place with some superb views as they gleaned caterpillars from the fresh green oaks. They were difficult to count but I reckoned on about 14. They were not that vocal this time round. The only other migrant was a single normal looking and sounding Chiffchaff. The Ravens were bringing food into their nest with Rock Sparrows chirping nearby while Sombre Tits churred and a male Blue Rock Thrush sang from a pinnacle.

The view towards Molivos out of the actual wind but look at those clouds go! Oh and Subalpine calling and photobombing and Cinereous Bunting singing in the background

Back at the car looking into the wind down the valley to Meladia and the sea... could barely stand up...
It was struggle to get the doors open to get into the car before trundling down the hill in Sigri after a bird free windswept visit to the Petrified Forest (where the usual inquisitive grey mare came asking for something to eat and some water, both of which I managed to provide). 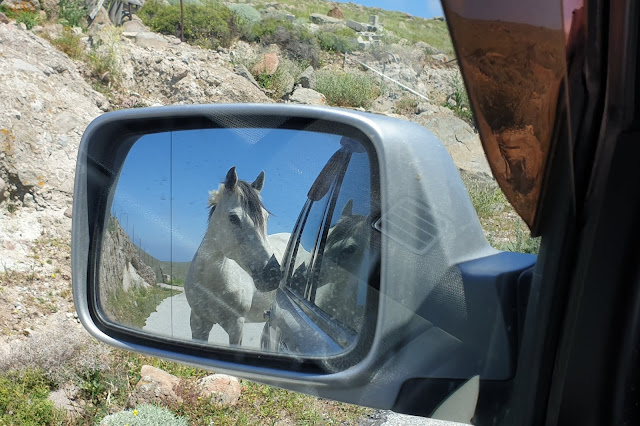 Both Shearwaters were offshore but it was otherwise very quiet and blown out by the wind at Faneromeni so I abandoned the plan and came back over the top to Skala Kallonis before a nip out to the far eastern pans where two Shelduck-sized Caspian Terns stood facing into the wind on the sand bar and occasionally waved those carrot bills around. Both took off after ten minutes and lazily headed for the coast and then east towards Mesa. There was no sign of the Pelican and no waders so it was back to town and then up the Potamia Valley where an adult and three immature Night Herons roosted with a single Grey Heron on the back edge of the mini reservoir and were my first ones on the deck this trip. A Short-toed Eagle cruised overhead and Alpine Swifts were dropping towards the big reservoir and a couple of Masked Shrikes sang from the olives and one male came and bogged us out from an overhead wire. He was not amused. 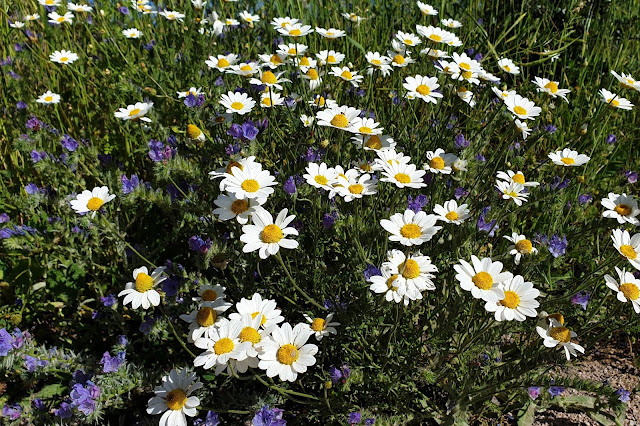 The valley itself was incredibly poor from an insect point of view and like many other rivers, it feels like the violent floods have temporarily knocked back the Odonata populations and a cool spring has also held back blooming flora and thus butterflies... however my rock turning did provide me with two fantastic encounters with un-reptilian Worm Snakes. One sat still enough so that could see the pinprick eyes and flicky tongue. I carefully replaced their respective rooftops. Cirl Buntings and Woodchats moved through the olives and a single Crag Martin was with the mixed other hirundines.


With energy waning we headed back to town once again for a final heron fest of six species on show on the Kallonis Pool before deciding that a relatively early finish pre-dinner would not be too bad a move after an exhausting day...