For one reason or another I have not been out on the reserve much this spring but have managed to see a few interesting insects on my perambulations around the centre, car park and gardens including both Bryony Ladybirds (Henosepilachna argus) and Bryony Bees (Andrena florea) on the various clumps of clambering White Bryony that decorate our fences.

They have been popular with visitors too and quite a few entomologically inclined birders have travelled some distance to see both these tricky to find species.

Even from the inside I have seen more Clouded Yellows in recent weeks than I have ever had in the spring before and at least two Wall Browns were seen along the river wall which is very encouraging. Holly Blues have been common in the car park and I was lucky enough to find a male basking with his wings open as was a similarly obliging Xanthagramma pedissequum ag.

I managed to escape away from the largely un-June-like weather to Iberia last Sunday for a very productive four days and returned to a deluge of wind and rain that thankfully abated on Thursday morning to reveal a sooty black male Spotted Redshank feeding manically on Purfleet Scrape before continuing onwards and the first juvenile Marsh Harriers were circling Aveley Pools. Hopefully there will be more to come.

Yesterday was actually quite pleasant and a very long day was enlivened by the capture with a pheromone lure of a classy little Orange-tailed Clearwing on the Guelder Rose on the exit ramp and culminated in our first late night opening of the year and associated mothing attempt.

Doing this on the Solstice was probably not a good idea as it struggled to get dark but the calm, warm and cloudy conditions after a cracking sunset brought out the Barn owls and in a few prizes including both Large and Small Elephant Hawkmoths, Light and Dark Arches, Phoenix and Clouded Silver to name but a few along with a female Stag Beetle and several bugs and flies. 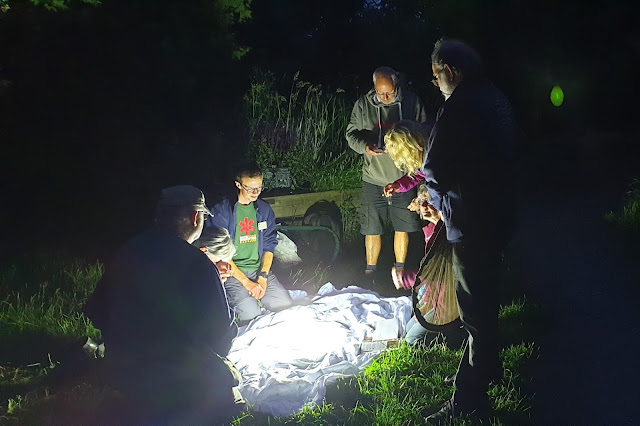 Glow-worms lit up for the first time and one of the car park ones had already attracted a mate.

Hopefully I will get out on the trail on Monday and see the young Avocets at last...
Posted by Howard Vaughan at 11:59