A fairly lazy start to the day and a casual glance at my phone (which was still on silent) was timed as a message came in on the county Whatsapp group that Gus Wilson and Gary had discovered a Sandplover at Cliffe on the Black Barn Pools.  The one image showed a largely summer plumaged bird with white above the bill but it the bird did not look too chunky.

Unusually for me I simply picked up my gear and headed straight out. Amazingly I chose the best route despite the first of the September School runs, caught the tricky temporary lights at in Cliffe Woods on the green and was soon bumping down to the Black Barn Pools. I parked and picked up my bag of gear and walked up to the mound where Gus, Gary and Ray had the bird in their scopes.  A quick look and then time to set my own up.

It was a striking bird and on size and structure alone my brain said one of the two Lesser Sandplovers as was.  Four minutes later it had a couple of practice flights with a couple of similar sized Ringed Plovers and then it was off and I followed it far into the distance as it climbed into the grey sky to the east with its cousins.

Poor Frank was one minute too late and Raf was not far behind him. The worst sort of dip.  The Pools were alive with waders and I reckon that there were about 100 juvenile Dunlin with four tramlined juvenile Little Stints and ten crisp juv Curlew Sandpipers amongst them.  There were three young Ruff and the juvenile Pectoral Sandpiper even came back in before I left.

I had very little time so I bid my farewells and headed home.  I even did some hasty notes to augment the great footage taken by the other guys. I might do something better later but I thought it best to get something on paper given the magnitude of the bird. 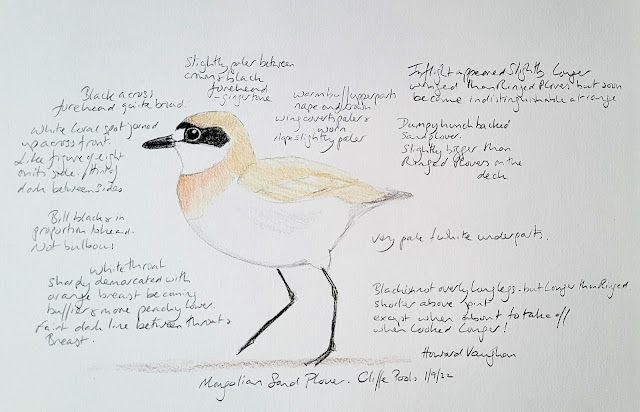 My gut and several features steers me towards Mongolian rather than Lesser (or whatever I should be calling it now) but I am one of the lucky ones who saw the first (at the time) Lesser at Pagham way back in August 1997 and the first Mongolian at Keyhaven in July 2003 so I will bow to those with more experience than me.

Gus has kindly allowed me to share one of his invaluable phone scoped videos.