Regardless of the season there is always a day out West but in autumn it can be a very quiet affair with scant migrants and a few local residents and so it was with a little trepidation that we hit the road after breakfast.

Six Stone-curlews at last gave themselves up on the Ennia Kamares (thanks to Adrian and John) before the wiggle along the coast. 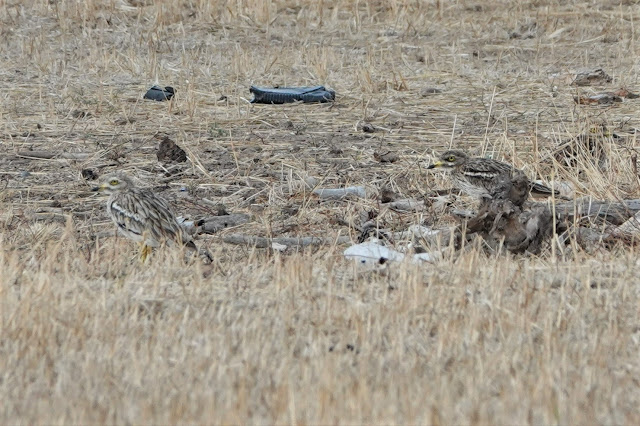 A couple of brief roadside stops produced Sombre Tits and singing Woodlarks and several Middle Spotted Woodpeckers bounded across the road. A couple of Common Buzzards, many Ravens and a Black Stork were also noted along with head bobbing Agamas.

The first part of the coastal track from Eresos produced a sentinel Blue Rock Thrush and the odd Cirl Bunting and Red-backed Shrike along with a large aggregation of Hooded Crows that were obviously on an obscured carcass. Above them gangs of Ravens tumbled but did not descend and three Eleonora's Falcons scythed between them.

Up and over the top and down into Meladia where the flatbed milk trucks had replaced churns with gun dog boxes. It was obviously a Chukar hunting day and chaps in orange shirts worked the hillside above and valley below with their dogs. We said our ‘Kalimeras’ and moved down the road about half a mile. The retorts from the guns echoed down the valley and I watched two nice plump Partridges hurtling towards our position, weaving about just inches above the vegetation before safely making cover. Two-nil to the birds.

The little farmstead halfway down held noisy Crested Larks, Rock Nuthatches and Sombre Tits and Stonechats and Cirl Buntings were around the buildings. I could hear Rock Sparrows but could not find them and Willow Warblers and a Red-backed Shrike were in the Chaste bushes.

Up over the ridge were two more Eleonora's and a juvenile Red-footed Falcon and a majestic Short-toed Eagle hung high above any prospective prey.

A flock of 54 Bee-eaters lined the wires near the Pear Trees of Happiness with many green juveniles amongst them and both Sardinian and Cetti’s Warblers flicked across the road. 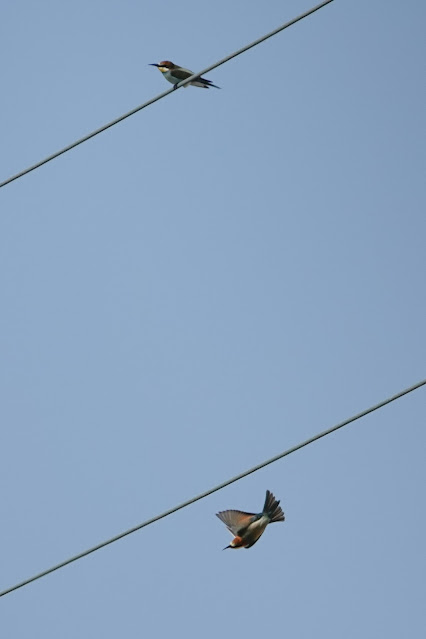 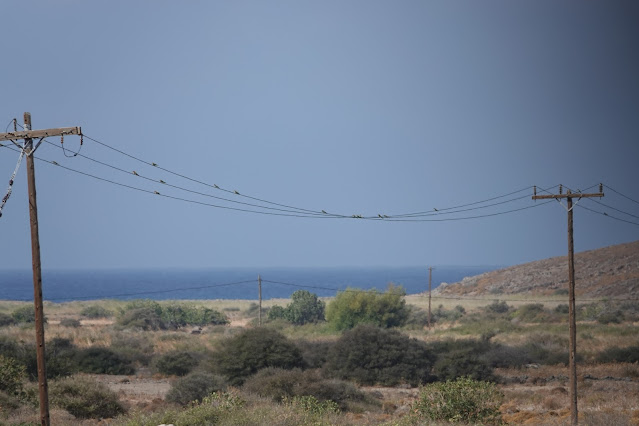 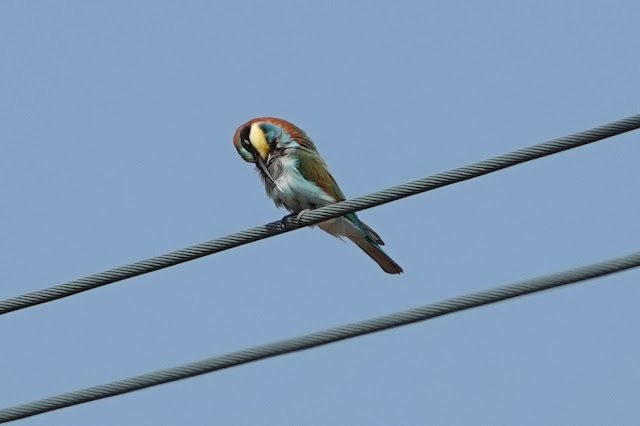 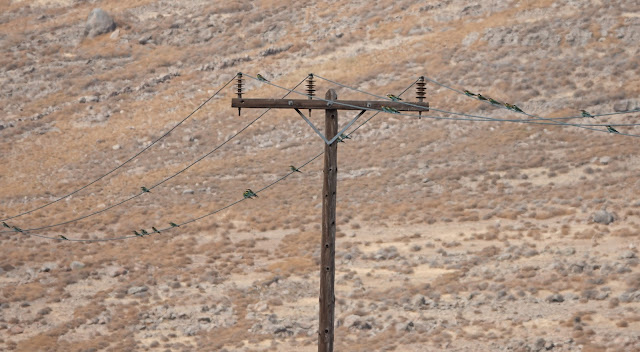 Beyond the dry barren ford we picked up the odd extra Shrike, Whinchat, Stonechat, both Northern and Eastern Black-eared Wheatears and several Tawny Pipits on the track down towards the river mouth

Red Rumped and Barn Swallows circled and two Common Swifts were the first we had seen. Marsh Harrier, Eleonora's and a female Common Kestrel were seen near the Cheese Sanitorium and a juvenile Woodchat was the first for a couple of days. The scenic views, as ever, were spectacular.

Lunch was taken on the deserted beach at Faneromeni and we even persuaded my non- swimming Mum into the sea for the first time in nearly forty years. Tawny Pipits scampered around the sand and Dune Tiger Beetles scurried after sand-flies.

Rock Doves and a cracking dark Eleonora's were seen along with the odd Shrike and a well marked dark juvenile Honey Buzzard circled overhead before we headed back up and homewards.


Although we found no Chukar at the Petrified Forest, we did see some very smart Eastern Black-eared Wheatears while Rock Sparrows, Crested Larks and Linnets came to the watering hole and Rock Nuthatches put on a great show of boulder hopping. A ringtail Hen Harrier circled high in the blue and the scale threw me to start with.

A Cretzschmar's Bunting, six Cirls and five more Rock Sparrows were seen on the roadside as we continued onwards to Ipsilou which always has to be visited even if we only saw Raven, Wood Nuthatch and Blackbird as the views (with a final cup of coffee) are always amazing.

Last stop Perivolis to feed the kittens and check the riverside groves. It was still alive with Sylvias and Spotted Flycatchers along with two Redstarts and a couple of Hawfinches amongst the Chaffinches. A lone Woodpigeon flew across the valley. There is always one errant pigeon per visit and it avoided the circling female Sparrowhawk.

A Goshawk was the only roadside addition near Skalachori before a quick look at the Stone-curlews again before dinner.

Unlike last night there was a night drive and Uranus (or Ouranos the primordial God of the sky and husband of Gaia – Mother Earth if I was going to be all Greek about it) was successfully found despite some cloud cover and a plump, bug eyed  Eastern Spadefoot Toad ambled across the road and onto my amphibian life list.