Dad and I were up at the double bandstand at Argennos below Mt Lepetimnos by 10am with a stiff somewhat chill north easterly blowing onshore but not a cloud in sight. A small team assembled and over the next two hours we picked up at least 33 juvenile Honey Buzzards coming in from Turkey including a flock of 12. All were on the dark side bar a strikingly pale individual that was in fact the first we saw. Some of the views were fantastic. A juvenile Marsh Harrier, eight Sparrowhawks and singles of both Lesser and Common Kestrel were noted. A male Goshawk was seen battling across and another adult male and female were seen around us and may have been migrants or locals.

The big female was seen off by a Raven - probably the only diurnal bird to give them a headache. Two dark Eleonora's Falcons passed by us and a Peregrine was up around the masts with the tumbling Ravens and local Buzzards drifted up now and then.

Chaffinches bimbled east and a Tree Pipit went the other way but there was no other discernible passage. I did however find two fine Woodpigeons in the valley below and forced the others to look at them!

A quick stop above Mithymna on the way back added a flock of Bee-eaters, two more Honey Buzzards and a Short-toed Eagle while Robins, Cirl Buntings and Middle Spotted Woodpeckers were heard from the roadside groves and Oaks.

The cooler morning had become a blistering afternoon and while the Queens State funeral played in the background and a gathering of Brits respectfully watched the big screen Thekla had set up, I dozed in the shade.

A short pre-dinner pootle around the Triangle gave me a female Sparrowhawk, Green Sandpiper, a Short-toed Eagle on a pole, a few more flava Wagtails and Whinchats and a close view of that male Red-backed Shrike at last! 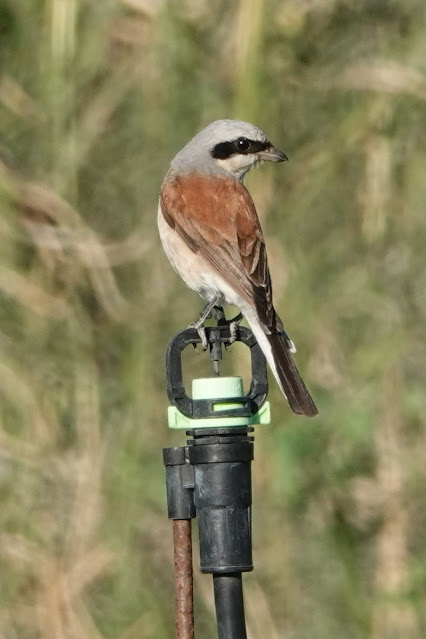