Some thoughts before I start:

I was in two minds as to whether to put this piece at the beginning or end but in my humble opinion Autumn in Lesvos is best suited for naturalists who have already tasted the joys of the spring and are comfortable bimbling about the Saltpans and Loutzaria and finding birds in irrigated corners and shady riverbeds.  It can be spectacular with falls of Willow Warblers, Wagtails, Raptors, Pipits and Shrikes – but with clear blue, cloudless skies and no rain it can also be quite hard work at times.  It is often still very hot and downtime (almost unheard of in the spring) is a must and may even include a siesta, swim and a cheeky Ouzo – whatever next?

It is still a magical place and if you keep your ears and eyes open and try to fathom where the wildlife might be, then you will find delights and surprises in unexpected places.  I would say that being on foot is even more beneficial in the autumn and sticking your hat on and taking some water and disappearing off out of Skala Kallonis for a circular walk will provide equally close views of the birds stocking up in the various stages of irrigated and harvested alfalfa.

You will find yourselves trying different tracks, scrumping Figs and Walnuts, swimming off Faneromeni and Tsonia, visiting ancient monuments and archaeological sites and stopping for an ice-cream at Bagatelli’s in the village.  If you only have a week then the West is almost a barren desert and can even be missed out (who would have thought?!) and the Eastern Saltpan track will be your pre-breakfast friend for the bigbird feeding frenzy.  Butterflies abound but blooms for them to feed on are sparse and you will train your efforts on the last of the Fennel (normal sized Ouzo species) and the Chaste Trees – patience is required for anything to land while there are still plenty of Dragonflies to enjoy.  Dusk and full night driving of the tracks is a joy with Bats dipping in and out of the lights and Nightjars and Owls if you are lucky and the chance of various Inverts, Amphibians and possibly even a mammal or two. You will lose yourself in the night sky.

Quite simply you can’t fail to enjoy your visit and its more relaxed pace and you will end up writing another chapter in your own appreciation of the island.

Stansted was a complete mess despite the 3am arrival time with huge baggage drop (not check in) queues and a quite scary crush for the transfer shuttle but the Jet2 flight was just fine and we arrived safely late morning. After the usual navigational fun that is Mytilene we were greeted at the Pela by Thekla and her Dad and shortly afterwards a cold beer and the prukking of low flying Bee-eaters and chirping Red-rumped Swallows was a fine way to start proceedings.

A lazy lunch and then a first late afternoon circuit of Loutzaria (having looked at the big, relatively new birdwatching boards around town I will endeavour to correct my own place name spelling errors that have crept in) and the Saltpans. It is always dry and hot this time of year but just like at home the crispiness had been cranked up a few notches.

Despite almost no irrigation going on we found 12 Red-backed and two juvenile Woodchat Shrikes  around the fields with a small scattering of Northern Wheatears, Whinchats, vibrant Willow Warblers and the usual bewildering array of flava Wagtails with birds ticking Blue, Grey and Black-headed boxes. A single Tree Pipit, five chupping Tawny Pipits and two White Wagtails were seen and an orangey bellied juvenile Montagu's Harrier jinked and twisted after small bird prey. Just one Common Buzzard and a single Short-toed Eagle were seen and four hirundine species headed south west.  An adult and two juvenile Turtle Doves briefly perched up on the wires.


The Tsiknias above the Lower Ford was bone dry and the river mouth just held some Egrets and Grey Plover, Greenshank and Curlew.

Down at Racetrack there were more Tawny Pipits and Short-toed Larks and five more Curlew were with the Yellow-legged Gulls and ‘Mingos on the beach while a juvenile Lesser Grey Shrike hunted from the first Tamarisk that as usual had a Great White Egret roosting under it!  I could hear Sandwich Terns out in the Bay and seven Common Terns noisily flew around before heading for the pans. 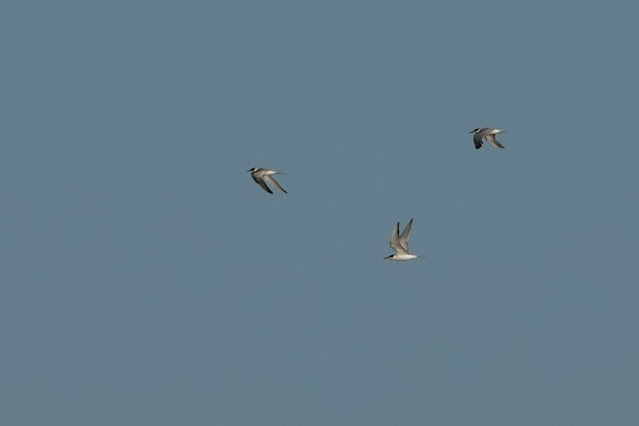 Out on the Saltpans I counted eight hulking Dalmatian Pelicans, Black Stork and 11 Spoonbills and back around at the Stilt Corner there were  33 Slender-billed Gulls with 46 Black-headed Gulls on Avocet Island and three Little Terns fishing further back. 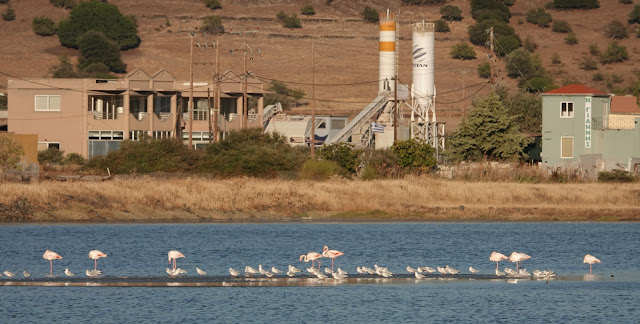 A bump back through the middle for dinner followed, with groups of Hooded Crows amassing on wires along the route as if they knew that there was imminent bad news to deliver...

The news of the passing of the Queen broke over dinner and cast a sombre cloud over our first evening.