A relatively early post breakfast start saw us at Achladeri at 9.30 and for a short while we had the woods to ourselves. A flock of birds near where we stopped held Blue, Great, Long-tailed Tits and at least one Coal Tit as well as Short-toed Treecreepers and a multitude of Chaffinches and a calling Common Chiffchaff which is not always an easy autumn bird.

A chance glance up just after hearing the first Kruper's Nuthatches saw a stunning pale phase Booted Eagle spiralling in low lazy circles. Certainly the best views I have ever had of one on the island.

The Kruper's were eventually pinned down with four in two pines. They were very vocal with an odd buzz call that we do not hear in the spring and by following the tapping we soon had good views.

Woodlarks called behind us and Sardinian Warblers rattled and made short whirring flights between the Kermes Oak understorey. Middle Spotted Woodpeckers were also vocal but invisible and most species chose this modus operandi when Steve and Gina arrived which was frustrating.

I did however find a doe Fallow Deer slowly walking through the trees which was something of a surprise. A bit of Googling suggests they are not a native species here being illegally released for hunting but it is going on my Lesvos list!

A calling Short-toed Eagle had us all thinking of Osprey until it circled into view. The distinctive chipping of an Eastern Bonelli's Warbler was heard in the Pine canopy but I could not find it. This was my first autumn record.  Eastern Rock Graylings flicked between trunks, completely disappearing upon landing on a trunk.

Onto the coast road with its usual Shags and scurrying Common Sandpipers and then we came upon a hovering female Lesser Kestrel over an irrigated field and then a short cropped green field with Wheatears, Whinchats, Wagtails and Willow Warblers. A Hoopoe became one of three we found there and Gina and Steve arrived just in time for a juvenile Roller to still be in view! 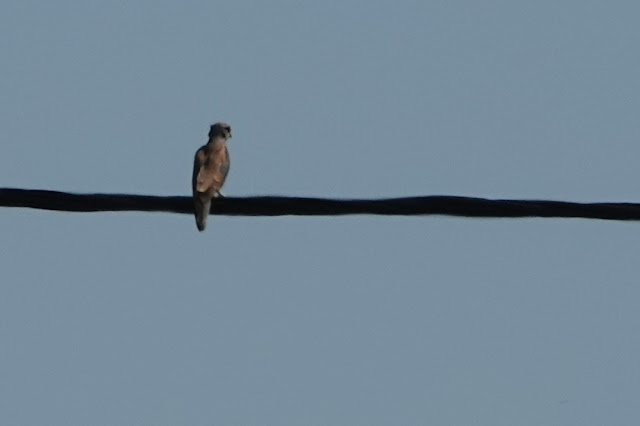 Technically it may have been quite a dull bird with muted chestnut and pale dirty blue underparts but the wings were vibrant in flight. Only my second here in the autumn and always a joy to see.

Zitting Cisticolas did their bouncy thing and Sardinian Warblers were heard on the route while a raft of 65 Med Gulls were just offshore.


Down at the Polichnitos saltpans I thought I had failed with the single Black Winged Stilt as I found a dead one with a flock of Redshank and Greenshank apparently mourning its passing which was all rather odd with much panic calling and hovering over the corpse. Thankfully I found a fully alive one (with one and a half legs) at the other end of the pans. There were a few other waders including Little Stints and a Curlew Sandpiper and some Kentish Plovers and a family of Shelduck were the first of the trip. The Sandwich Tern flock only held two juvenile Common Terns and no hoped for Marsh species. A single Black Stork stood in the shallows. 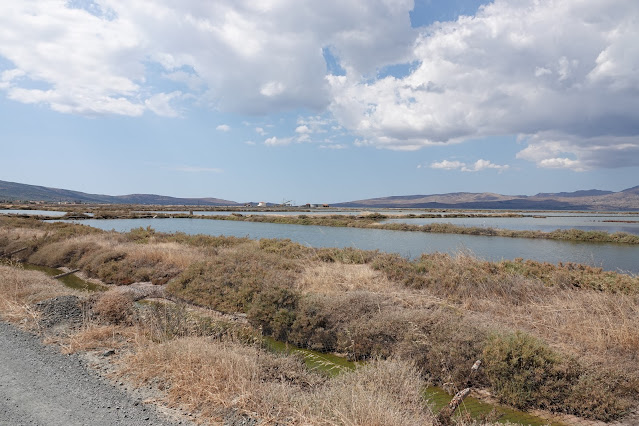 Lunch was taken on the beach in the shade of the Tamarisks and then we wiggled down to Vatara for a bit of culture with the Well of Achilles and ruined Temple of Dionysos. Sardinian Warblers were heard and a small flock of Serins were by the still flowing river. The huge fire that somehow spared Vatara had devastated a huge swathe of pine hillside of coastal scrub.

Back up to Polichnitos and the old thermal springs. No birds but great views of Lesser Emperor, Keeled Skimmer, Broad Scarlet and Red Veined Darter before following the road home to the Pela. I looked for the Kalami Pool Lapwing but could not find it but there were four Little Stint, four LRP, Wood Sandpiper and a bonus Temminck's Stint. 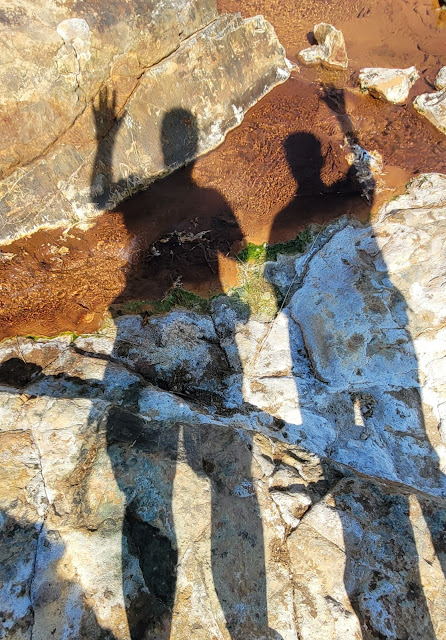 Ice-cream in town at Bagatelli’s and off soon for dinner at Alison's in Anaxos.  The night drive back added a young Fox to the mammal list and I recorded some of my Bat Detector action when we got back.  I seem to have hits at 45, 55 and 90khz.  I think Common Pipistrelle and Soprano Pip for the first two but not sure about the last one.